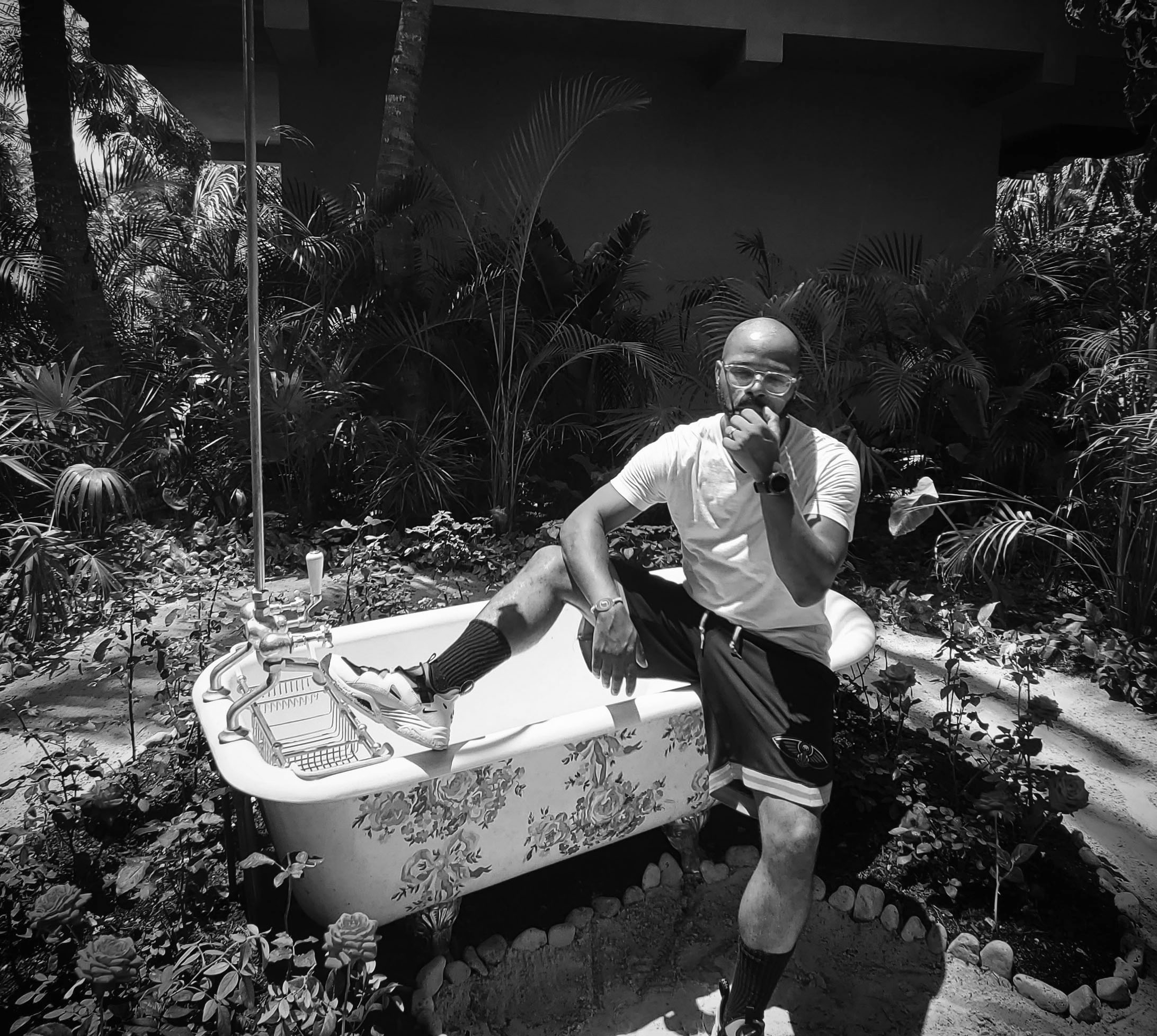 By RENARD BRIDGEWATER for MaCCNO

Austin Levy (A. Levy) is a modern day Jack Of All Trades: touring hip-hop emcee, event curator, audio engineer, recording studio owner, and all around go-getter. His ingenuity and adaptive spirit were established early in his rap career when Levy figured out a way for him and his friend to collaborate, despite the latter’s overprotective parents not letting him outside. “When you have problems, you figure out things,” says the resourceful emcee, as he quickly learned during his adolescence that he could record music through the end of a microphone and a pair of headphones. This led to the remixing of No Limit songs and “putting our own lyrics on it” in a parody-like fashion and eventually, to “writing my own stuff” on beats downloaded from peer-to-peer music sites like Napster and BearShare. In the years since, the New Orleans Hip-Hop Awards winning artist has released a slew of projects from the You Welcome mixtape of the early 2000s to this year’s Midas LP. Levy describes the latter as “music made with the fans in mind.” He goes on to say it’s “a fun album, something that would go well with performing also.” As an emcee, you learn fairly quickly how to read an audience, what songs become potential fan favorites, when to issue a call-and-response, etc. The New Orleans East-based rapper has developed these time-tested skills performing at Atlanta’s annual A3C hip-hop festival, the monthly freestyle parties of Bangkok’s SuperFly, Austin’s SXSW, and several nationwide tours he booked independently.

The Hut Studios, A. Levy’s recording facility, began about 19 years ago in his mother’s garage since her home wasn’t a viable option for late night recording. “I used to go inside and take my Dell computer——the whole thing, monitor and all that—and put it on the washer machine in the garage we had outside. And we’d just be pretty much rapping til like two in the morning,” Levy recounts. In 2006, the Hut Studios moved from Levy’s apartment to its now well-known location inside of The Maze in Gert Town. Along with The Hut’s co-owners, Levy has recorded vocals for heralded local standouts U.N.L.V., former boxing champion and rapper Roy Jones Jr., an entire album by Lil’ Boosie’s daughter, Ivy (ghostwritten by her jiggalating father while still incarcerated) and Roc-A-Fella Records artist Freeway, among countless others. Shortly after this year’s Essence Fest, the studio suffered its second severe flooding event, which caused Levy to cut his financial losses and relocate to New Orleans East. The new space has many pros; but most importantly, with it being a larger space, the studio now has ample room to record vlogs and podcasts, as well as provide green screen rentals and monthly studio memberships. On November 2nd, the Hut Studios will partner with First Priority Foundation to provide an engineering workshop where youths age 10 and up will have the opportunity to tour the studio and learn from Levy as both an artist and businessman. His interest in the collaboration stems from seeing a lack of access to similar events during his time as an up-and-coming artist. “I wish that we had more things like that readily available to us, that [are] really for us. We need more stuff,” says Levy, adding, “The main thing I want to instill in them is how to monetize and maximize the opportunities that’s in front of you.”

There’s certainly pros and cons to wearing the respective hats of both studio engineer-owner and recording artist. Despite their similarities, one is an occupation while the other is fostered from your creative expression. Although having unlimited access to studio equipment may increase your creative output, it neither insures nor expedites your success. And with 40,000 tracks released daily on Spotify alone, artists find themselves in an age of music where they constantly struggle to remain relevant. “I know for a fact I personally didn’t put out the quantity of music that I wanted to or that I should have, for somebody that owns an actual studio. Then with it being a job, in a sense your energy not always right coming in here,” says Levy. I often speak with fellow creatives about working towards achieving a balance between one’s creativity and productivity. Spoiler alert: it’s not an easy task and tends to be an ongoing one. “It’s two different people… I’m fairly quiet and not aggressive when it comes to my own music [when working as an engineer]” says Levy. You can hear how this internal tug-of-war even affects the Warren Easton High School alumnus’ plans for 2020 as well: “I want everything to be on autopilot where I can focus specifically on my own music and I don’t have to worry about the stresses of if I’m not physically here the world gon’ fall apart and I’ll have to be putting out fires when I get back.”

We see the online declarations again and again as the new year looms. Every year is my year for someone in a creative industry. Though A. Levy hasn’t made any resolutions, he has adopted a different approach: “I’m only doing shit that I want to do moving forward.” From the outside looking in, it feels A. Levy has been doing it his way for a very long time.

photo courtesy of the author

The ABO Ordinance Finally Passed.
Here’s What That Means and What’s Next

On October 3rd, City Council passed long-debated revisions to the laws that govern all businesses selling alcohol in New Orleans (Alcoholic Beverage Outlets/ABOs). Through the collective advocacy of numerous individuals and organizations, we are happy to report that most of the problematic and culturally damaging provisions have been removed. There will be no mandatory real-time surveillance. The complaint system has been simplified, and proposed pro-gentrification language—in which five complaints made within a half mile of a business could cause the loss of a liquor license—has been entirely removed. Fingerprinting requirements for employees are gone. Discriminatory anti-loitering language was removed. Some limits to the employment of formerly incarcerated individuals were repealed. Language limiting music was taken out of the ordinance. And outside seating was officially legalized. On these issues, we can not only claim success, we can collectively take credit for refocusing an overly punitive proposal that would have damaged local small businesses and limited cultural activity into a series of changes that actually create a more positive, just system.

Still, notwithstanding these considerable successes, challenges and further work remains. Most immediately, controversy surrounding a provision that would allow the office of Safety and Permits the ability to order an emergency shutdown of ABOs that “pose an imminent danger to the public” remains unresolved, and that section will have a separate vote in the near future.  City Council members have assured industry representatives that businesses will have due process, but the details are still being worked out. While this is the major unresolved issue, other idiosyncrasies and minor concerns remain. Inadvertent limits on musical performances at ABOs within 300 feet of places of worship, schools, playgrounds, and libraries have been lifted. And while hotels and restaurants can both sell alcohol and have live music within this 300 foot “buffer,” live performance venues—businesses that only host live music and theater—cannot sell alcohol within the 300 foot zone. Similarly, the ability to override the 300 foot buffer and allow other ABOs to open within the restricted area remains limited to property owners only, a lingering remnant of the Jim Crow era. While these issues may only affect a few businesses, they should not be overlooked, and will need to be revisited.

We want to extend our thanks to everyone who called, e-mailed, or spoke in favor of a more just system of oversight for ABOs, and appreciate the willingness of City Council members and staff to engage and work to resolve many of our concerns. Please keep following MaCCNO (maccno.com) for updates and analysis as these changes move forward.