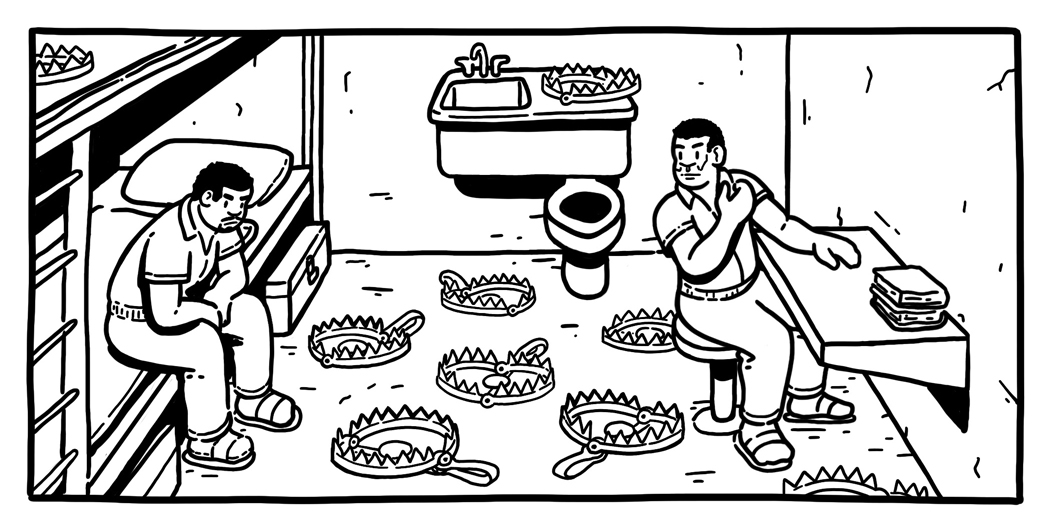 The times are bleak and here’s one thing I can say for sure: the lawyers won’t save you. Yes, we’ll fight hard, try every trick in the book, maybe even get arrested symbolically; but nobody’s ever argued their way out of capitalism. Even our supposed allies within the legal system (yes, I am talking about Ruth Bader Ginsburg) are blinded by the logic of market supremacy, and really you’ve just gotta peel back a couple layers of the onion before the sting hits you in the eyes. For example, take a look back at the first article I wrote for this publication, where I spoke glowingly of the dissent written by Judge Regina Bartholomew Woods. Well, looky whose judicial campaign was propped up through a $235,000 loan by the sanitation worker union-busting fat cat (and Woods’ spouse) Jimmie Woods. That’s quite a hefty loan for a man so broke he has to use incarcerated (slave) labor instead of paying his workers a living wage. There’s just so many better uses of your time than law school—you can unionize your crappy job, learn to assemble and disassemble guns in the dark, volunteer with the Vermin Supreme campaign; you can even join the Democratic Socialists of America. I dunno. Here’s some cases about COVID-19 in Louisiana.

Tangipahoa Parish Sheriff Daniel Edwards, the Randy Quaid of Louisiana politics, took time off from his busy schedule of running the annual “Christmas Crusade for Children” and having his office raided by the FBI to spend taxpayer money filing a class action lawsuit against the People’s Republic of China. The lawsuit—filed by a group of long-practicing attorneys who’ve clearly lost the fear of repercussion for filing frivolous claims in the Trump era,  and who can’t seem to spell their client’s parish correctly in their own filing—seems to be alleging that the Chinese government committed fraud against every sheriff in America by releasing COVID-19 from a biochemical factory in Wuhan. As a cultural artifact it’s fascinating to see the facts laid out in legalese. For all the jokes we lawyers make at the expense of the sovereign citizens movement, perhaps it’s time to wonder if these quixotic dreamers aren’t making some headway into our jurisprudence.

There’s been some talk recently in the media about Strategic Lawsuits Against Public Participation (SLAPP). The idea of these lawsuits is that big corporations will sue activists in order to lock them in to soul-crushing lawsuits that will ruin their family life, impoverish them, and send a warning signal to future do-gooders. It’s a real abuse of the system and it’s one of the ways corporations maintain their supremacy. It is an extremely effective tactic. But do you know what’s not effective? Doing the exact opposite. For example: a small-town Louisiana sheriff sues the world’s second largest economy under the assumption that four elderly Louisiana lawyers will be able to wade through millions of documents in Mandarin, find the smoking gun that proves a vast global conspiracy, and then use that fact to compensate Tangipahoa for all the lost revenue they’ve missed out on from not being able to issue enough speeding tickets. Look, I love lawsuits as performance art as much as the next arthouse lawyer but this type of litigation can get really, really expensive. Should China choose to defend this suit, Tangipahoa taxpayers could be on the hook for millions of dollars of legal fees. Maybe not the best idea during the worst economic recession in American history? But, hey, at least Sheriff Edwards got a three-hour headline on Nola.com.

Over here at Craw & Order, we tend to focus on the trial courts of Louisiana, but for this entry we’re going to broaden our scope ever so slightly. In the case of Laddy Valentine v. Bryan Collier, Houston Judge Keith Ellison took the nearly unprecedented step of showing some concern towards the lives of incarcerated persons. In this case two incarcerated men, Laddy Valentine and Richard King, sued the Texas prison system, alleging that the prison was deliberately indifferent towards their health and safety during the COVID-19 pandemic, and that this cruel and unusual punishment violated the Eighth Amendment (“Excessive bail shall not be required, nor excessive fines imposed, nor cruel and unusual punishments inflicted.”). There was a mini trial where evidence was presented about the conditions in the facility and, in what must have been a total shocker to everyone, Judge Ellison ruled that the prison had to enact effective precautions to make sure that people don’t die. Judge Ellison required the Texas Prison System to take a handful of pretty simple steps. The order was modest: just do basic stuff like provide hand sanitizer, masks, and soap; quarantine; suspend copays for medical treatment (yes, seriously); and conduct regular testing. There was no financial penalty and nobody was ordered to receive an early release. Considering the scale of this pandemic in the prison population, Judge Ellison’s order should have been uncontroversial.

Enter the Fifth Circuit Court of Appeals (the Fyre Festival of the federal judiciary), who wasted no time overturning the trial court’s order. Oh, and they’ve got words for Judge Ellison. Words and logic. Judge Ellison, they gaslight, you claim to be concerned about the prison population but did you stop for even one second to think about the harm you were causing to the prison itself? Yes, they really do say that “the burden upon [the prison] in terms of time, expense, and administrative red tape is too great.” God Bless America.

The judges also ruled that The Prison Litigation Reform Act (PLRA) barred the lawsuit from moving forward in the first place. The PLRA, signed into law by William Jefferson Davis Clinton in 1996, requires that incarcerated people go through the time-wasting process of filing internal grievances with the prison before being allowed to sue. So, for example, if you wanted to file a lawsuit to stop abuse in prison by the prison guards, the law requires you to snitch on your abuser by filing a complaint against your abuser, hoping that your abuser will fix the abuse. This law came into effect because incarcerated people were overburdening the courts by filing too many lawsuits, so our national response was to restrict access to the courts, rather than fix the things that people were filing the lawsuits over. The Fifth Circuit also ruled that Valentine and King couldn’t even bring this suit because they didn’t exhaust the grievance process under the PLRA. Obviously, the trial court didn’t overlook this fact, ruling that the internal grievance procedure could not be completed before COVID-19 spread throughout the prison. The Fifth Circuit disagreed, despite citing no facts about how fast the internal process actually would have worked. Luckily, the United States Supreme Court took up the appeal and ruled in favor of the incarcerated residents of Texas. Just kidding. They suck. They ruled in favor of the prison.