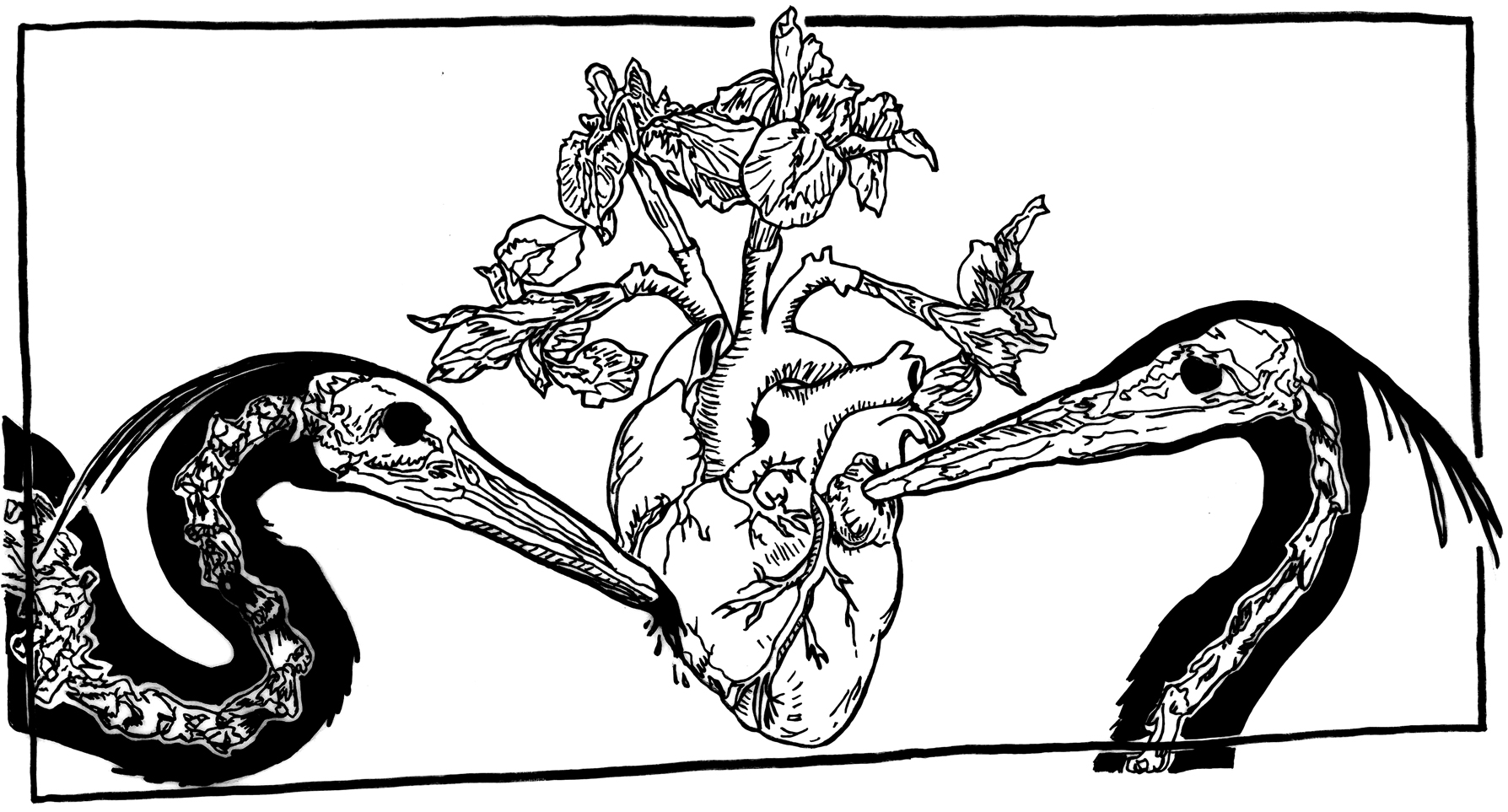 Don’t let go. You’ve got the music in you. One dance left. This world is gonna pull through. Don’t give up. You’ve got a reason to live. Can’t forget. We only get what we give.

Occasionally a plant will grow too large. It will consume all of the space wherein you had planned to place so much more. When this happens, often it can be enough to cut the plant’s limbs, to thin out its monopoly over the sun, so that it does not trip over itself, so that it does not shade out the space where others were meant to grow, and then everything proliferates together, harmoniously. Unfortunately, pruning is not always enough. Some root systems grow too large and complex, extending beyond the bounds of whatever barriers you had placed upon it, creeping underground and seeking new energy beyond all expected horizons. When a plant does this, hard choices have to be made. Sometimes it becomes such an institution upon your space that to remove it for the sake of new growth seems haphazard. It’s best to let it be what it was always trying to become… or not at all and it needs to be uprooted, chopped down from above and hacked at below, violently pulled from the earth, disrupting ecosystems, sowing chaos, weeds, death, violence.

But behind that chaos a fresh air circulates through the freshly tilled soil. There is a clean slate, which for a time is perfect to behold, unscathed—a palette of infinite possibility and unforseeable futures. A place to lay plans and to start again. Alas, then it rains (it will always rain eventually), and when it does the weeds whose seeds had been dwelling beneath the surface—who had never seen the sun or the light or the rain—are freshly turned and tilled and given a chance at life. And they do not hesitate to take it. And before you have made it yours, the soil is again taken by nature, the big thing is gone, the weeds have laid their claim, and now you will have to fight them constantly, maybe for years, to make space for your ideations. You cover them up in mulch and hope these monsters don’t grow big enough, deprived of light and love, to overtake your seedlings, your future, your new season. But there are no promises in hope.

Maybe nothing will grow too large. Maybe it will stay small. Maybe you will want something to grow and it simply won’t. The soil is too compacted, trampled and worn and impossible to place roots in. Or there was a disease hiding just below the surface, a fungus, invisible until accessed that cannot live if a plant does not die or at least suffer and stagnate. Maybe it will not grow because it is drowning in a puddle, because you care for it too much and too often. Maybe it’s just the wrong season, or the wrong climate, or it’s just in a dark corner, or blinded by the light.

You will have to kill things to enable any seed you plant to live, and yet and still, every seed you plant will someday die. If you fear confrontation, you can broadcast ameliorations upon your gardens, spray them and sprinkle them in a broad swath with things that kill and things that feed and things that protect. That might work for a while. But when acute issues arise, if you do not face them, if you do not cut them off at the node, or tear at them by the root, or squash them between your fingers, they will proliferate and they will take over and then they will be all that is left.

If you are not present, if you do not spend time tending to your garden, it will deteriorate. Cultivation is artful observance. It is awareness. It is sharing space and time. If you are too long apart from that which you wish to see grow, something else will grow there instead.

If you try to make plans, to draw out what you want to see, to follow those plans to the letter, you will fail and more will go wrong than if you had made no plans at all. You cannot be rigid and you must accept that nothing will go exactly as you had expected. If you try to force things, you will find yourself miserably focusing on all that is going wrong, you will miss all that is going right, and you will whittle away your passion for what you are pursuing until you finally decide it isn’t even worth it to try anymore. If you have lost your passion to grow, you may as well move on.

Even if you are growing in the best way you can, death, loss, and sacrifice is intertwined in everything you are doing. So many weeds have to die so that the things you want to grow can live. Those you want alive are fed with the bodies of the dead, turned to soil or turned to fertilizer. The bed that insulates them, that protects them from invaders, their mulch, their blanket, is made of plant carcasses. To care for a plant is to prune and shape it, dismembering it regularly, causing it harm so that it grows in a way that best suits its ability to meet your needs.

Every season, you will have to pull living plants out from the earth to make room for new ones. You will have to pull out thriving plants simply because you want to plant new ones, knowing that though those plants are thriving now, they won’t be in the months to come, because though nothing in the air has changed yet, you know it inevitably will. You will have to pull out dying plants before they have a chance to reach their fulmination, before they have a chance to mature and share their seed and start life anew, again. You will do this so you can plant the things you think will work in the future. And those new plants that you put into the ground, you will put them down there knowing that someday, even if everything goes right, you will have to uproot those as well, for all of the same reasons.

It will always be this way, and in some ways it will get easier, but in others it will not. No matter how many times you destroy something to make life new again, it remains intrinsically heartbreaking. And you have to destroy things to make things new again. It hurts, and it will always hurt. And it’s worth it. And more than being worth it, it’s necessary. And the only way to avoid this pain, or the truth of this pain, is to give up on growing, on loving, on caring. And nothing germinates from that. We only get what we give.