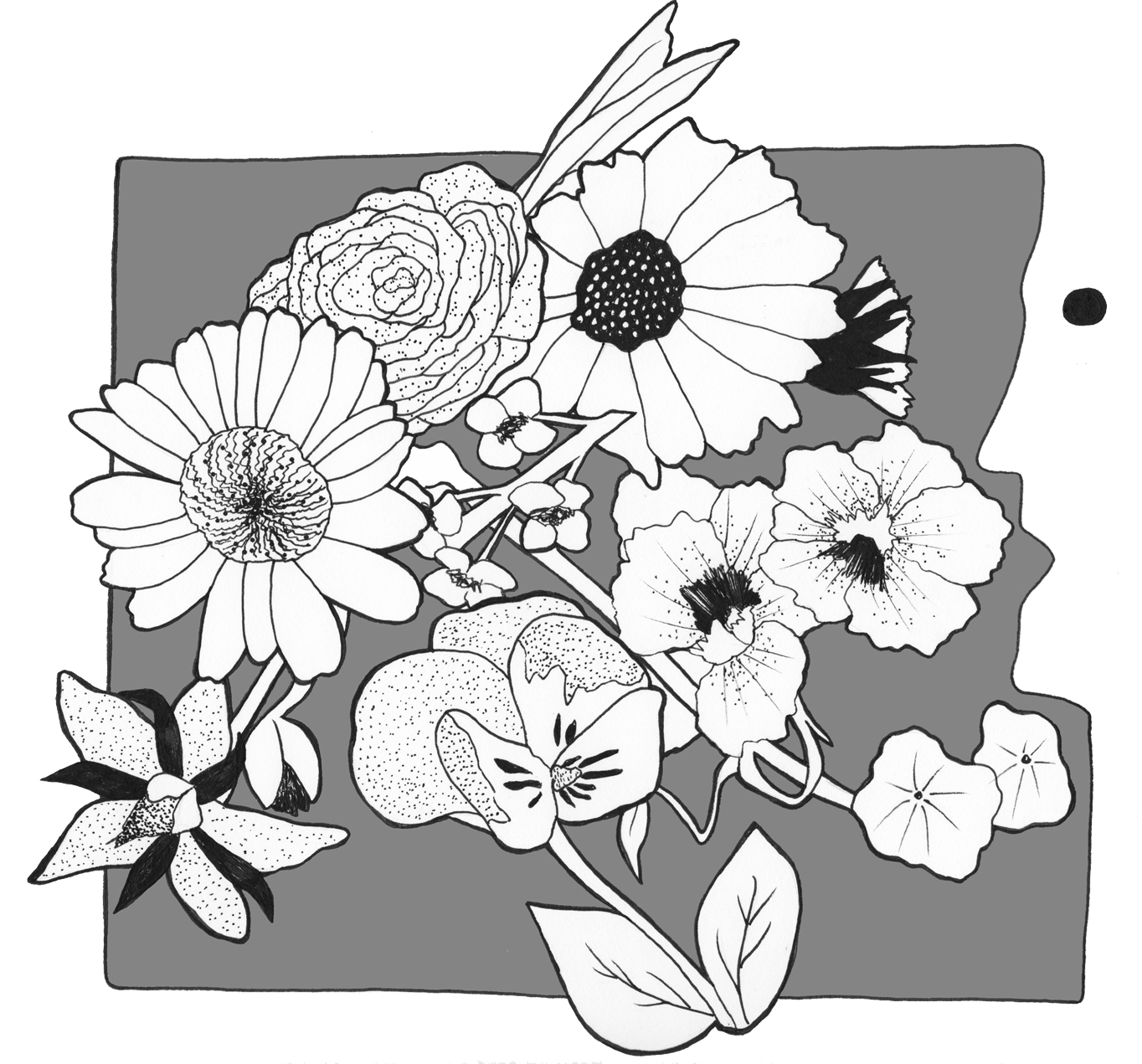 MY LIFE WITH THE EDIBLE FLOWER CULT

I came into professional plant care at the tender age of 22, bleary-eyed and hungover most mornings, in an industry that expected me to start shoveling dirt at eight o’clock sharp. I moved into the softer end of aesthetic plant maintenance a mere three years later, from the hardscrabble labor camaraderie of landscaping to the smooth-talking society salesmanship of high-end garden centers. My relationship with plants began with the ornamental, but I fell out of love with the surface beauty of flora all too soon, as the pull of the food-growing world called to me. For years since, I shunned the aesthetic pleasures of plant life, seeing beauty only in the utilitarian wonders of the food farm ecosystem.

Alas, I’ve slowly been falling for flowers all over again. Not just flowers, even—trees, shrubs, houseplants. There are eight houseplants surrounding me in the room from which I write this even now. And but for one aloe plant, not one of them has any practical value to offer humanity, not edibly, medicinally, or eco-systemically. However, home is a place to leave politics behind; it is the outside world that must always be growing with a purpose and a power to the people. Still, my eye does not see the beauty it once did in the organized chaos of an urban farm; the interconnective fabric of an ecological food garden does not pull at my heartstrings anymore. I have redeveloped an appreciation, perhaps even a passion, for pure aesthetics in a green space.

Yet I am of two minds and I cannot live without a reconciliation of my utilitarian roots with my deeper aesthetic roots. Deep beneath the soil, two must become one. And so they have. I have never been a stranger to edible flowers, medicinal flowers, beneficial-insect-attracting flowers, flowers that do more than look good. But not strangers is not good enough anymore; I’m on a mission from here until forever to make best friends with the most beautiful plants that are also out to make a difference in the human world, the inner circle that really makes things move. And I’m going deep into that eloquent inner circle. Join me, will you?

On the outer edges of this elite clique are the ones those of us in the food world already know well. Nasturtium, with its flowing tresses of green interspersed by shocks of fiery flower, grows here most of the year. The greens and the autumnally-colored flower all have a sweet peppery bite to accentuate any salad. Borage is known well to the culinarily inclined, whose bright blue flower and leaves are equally edible, each with the distinct and same refreshing taste of cucumber. Chamomile tea is derived from the dainty white flowers of the plant, which grows here with vigor when the sun is not destroying all. And the tart calyces of Roselle hibiscus, most dark and noble of the hibiscus family, make for the most refreshing beverage throughout summer’s same-said worst days.

The higher-ups in this cult of food flower have been hiding in plain sight all along. They are not the shadowy suits in the high towers. They are the everyday bedding plants, the last ones you thought you could eat—the ones you were afraid even to buy, lest your cats, dogs, or small children poisoned themselves upon their multicolored petals.

Violas are the most open of the bunch about their masticable secret. Their most well-known iteration, the Johnny-Jump-Up, is beloved around these parts because it is purple and yellow and thus extremely LSU/Mardi Gras color adjacent. They also love moisture and can deal with some shade. They taste like a peppery light wintergreen mint. Put them in your food. Also, pansies work the same way. Pansies and violas are pretty much literally the same flower, except pansies are bigger. Tougher too. I know you’ve heard of begonias because you loved that Sublime cover of that Grateful Dead song when you were in sixth grade, but you probably didn’t know they tasted good. Generally they carry the subtle sweetness of honeysuckle in their petals, but depending on variety can be kind of grassy and flavorless. Also, grow them yourself or buy them from a reliable natural grower, because these babies often get doused in pesticides before being shipped off to garden centers. Like violas, these babies are extra special because unlike most edible plants, they grow great in the shade.

Bachelor’s button, known to science as centaurea and perhaps to you as cornflower, makes for a lovely calming tea, but is great for adding depth to any meal that you want to include flowers in. It tastes like cloves, if cloves were fluffy light indigo with about a hundredth as much intensity. Calendula is a special sort of marigold that has been used in tinctures for aroma and all sorts of topical medicinal care for centuries. Even better though, it tastes like saffron—ungodly expensive, definite cause of war, death, and oppression saffron. Next time you’re thinking about starting a war over luxury commodities because your bouillabaisse isn’t quite right, just shred some Calendula petals into that bubbling pot instead. It’s cheaper. Also, it’s really easy to grow around these parts.

Alyssum is another common beloved flower around these parts, known for its elegant waves of tiny white flowers and the sweet, sweet scent they give off. Turns out they’re a brassicae, that is, of the same family as kale, broccoli, collards, and a thousand other vegetables that you’ve probably heard of. The bummer? Alyssum tastes like broccoli, not the sweet perfume it is known to produce. But it will be the most beautiful broccoli analog you will ever put in your mouth. Stock grows mighty tall but kind of hates the deep heat, so maybe don’t bother growing it until the seasons change a couple times. But when seasonally appropriate, it offers heaps of large elegant flowers that you can absolutely eat, and even enjoy eating. The flavor profile is much the same as a radish. Stock is the lofty Victorian heiress to the radish, the lowly groundskeeper in the gothic mansion of spicy things that taste the same.

The most elusive, yet pervasive of the edible flowers has to be the Camellia sinensis. More shrub than flower, the camellia is beloved across this great state for its rich green year-round ornamentation and multitudinous blossoms throughout the South’s colder seasons. Here’s the thing: Camellia sinensis is tea. The Tea. The tea leaf responsible for green tea, matcha tea, black tea, Earl Grey tea, Oolong tea, and almost every other variety of tea that isn’t herbal tea is derived from the leaf of Camellia sinensis. I know it’s a stretch to speak of the edible leaf of a shrub that is known for its flowers in an article that is about edible flowers, but if you are reading this, you were meant to know. 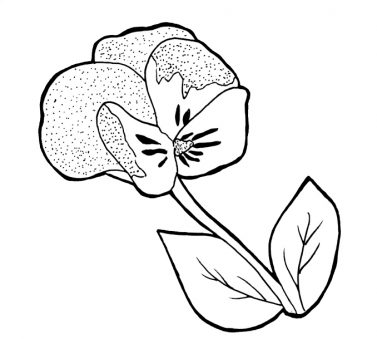 There are plenty more flowers in their ranks; you pass them everyday, unaware of their gastronomical potential. It is enough for now that you know that this shadow world does in fact exist just behind the veil, and that I have fallen for their charms. Call me a cult fanatic if you must, but I know that after many years of toil and torment, I have found the one true path amongst the edible aesthetes of the plant world. They live.