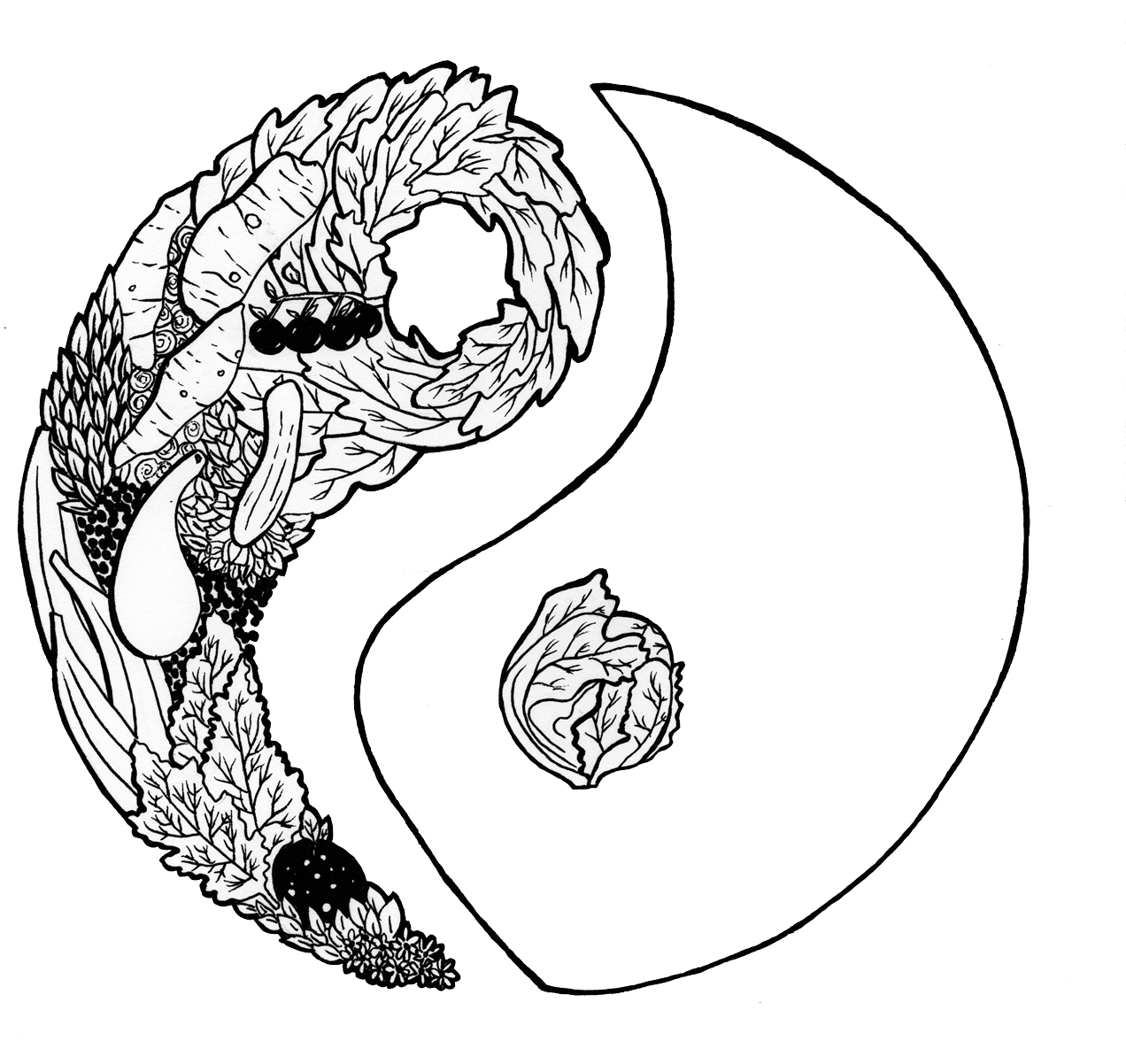 Semantics will take you far in this world. Thinking too hard about what plants should go with which other plants will not. Intercropping, companion planting, polyculture, crop rotation—as a purveyor of fine plants, I am often asked whether such and such plant will go together OK with such and such other plant. The answer is almost always yes. Plants compete, plants detract and attract good and bad creatures, and plants can help one another in a variety of ways; but it is the rare plant that actively inhibits the growth of a fellow plant of any sort, aside from the normal healthy competition. Still, there are things that grow fantastically together, usually for fairly obvious reasons, so we shall proceed herein with all the ways we should say yes to growing plants side by side.

But first, for the sake of devil’s advocacy and flip-flopping (‘tis the season), let’s speak first to the definitive no’s of interplanting in the food world. Pecans are among the most notorious of the unfriendly plants. The pecan tree, as well as the eucalyptus and black walnut tree, are all allelopaths, which is to say they exude chemicals from their roots which actively inhibit the growth of fellow flora around them. There are other plants with similar tendencies, but I mention these three because they all grow with vigor in our bioregion, and are all food or at least food-ish. Also, mint. Mint is a power-hungry beast that will overtake any space it is planted in, quickly and without remorse. As such, it should always be tucked away far from your other crops, or placed in a pot all by its lonesome without any friends.

The more diversity, the less chance of spreading pestilence and disease, pure and simple.

Let’s leave all that negativity behind us now, though. I think intercropping is especially critical this time of year, as the garden transitions from cool to warm weather plants. I would like to emphasize the word “transition” here, because seasonal change should very much be a gradual process, and not a full-on raze and makeover of a garden space. I know that planning one’s utopian backyard garden space meticulously is one of the more profound joys for many a gardener—and I was once just such a gardener—but this methodology almost inevitably leads to profound disappointment. Nature has bigger plans than you, and whatever your intentions are for your space, nature does not care and never will. I am not implying you should go into your garden blind and allow chaos to reign, but you must understand that what you dream is not what you will get. You must instead intertwine your dreams with nature’s whims, and thusly weave a growing space that really works.

This intertwining can and should be quite rooted in the physical realm. Planting your spring seeds and starts among or beside your out-of-season plants has multitudinous benefits to the overall health of your garden and the bounty you shall receive from it. First and most obvious, if you remove your out-of-season plants only after they are fully done producing, you will get more food; pulling out a full garden of aging delights to plant a bunch of babies will leave you facing months without produce, whence you ought to be harvesting all year long around these parts.

Leaving these plants in until they have reached death’s door serves the new plants in other ways, too. Older plants provide shade for your young babies so they do not get burnt by the ever-hotter sun. They also shade out competitive weeds that would easily overtake your young transplants if they did not also have to compete with the older plants in ground. So less sun for the good plants and less sun for the bad plants is overall a good thing. The older crops will also attract pests. This sounds bad at first blush, but if you are growing organically, the pests will be there anyway. If you leave the older plants in ground, the pests (those that aren’t hyper-specialized regarding their diet) will aim for the sick and dying before they attack the young and strong. This is extra beneficial if you pay moderate attention to your garden, because you can find eggs and young insects on these old plants and pull them as needed, thus preventing generations of bad bugs from overtaking your summer garden without having to sacrifice any of your summer plants.

Herbs specifically, as a whole, are fantastic to interplant between non “herb” plants. This is because the flavors that we as humans love to smell and taste in herbs were pretty much all developed specifically over millenia to scare the insects who would eat them away. We’ve toyed with them over the last few centuries to better appease our palates, but the root cause of their flavors remains the same. Of course, insects eat herbs too, but many of these creatures are hyper-specialized to breed among and eat those specific plants, sometimes even to the plant’s advantage. Exceptions to this rule of herbaceous interplanting are herbs which are in the same family as a plant they are next to, for example: dill or parsley alongside carrots.

I could easily go from here into a listicle of all the companion plants who like and don’t like to be with one another, but the thing is, I actually don’t believe in any of that. Most companion planting guides are based on folks’ conjectural personal experience, which I will strongly contend is actually not to be taken lightly. But reading these guides as gospel is a grievous misstep.

What really matters is plant structure, growth rate, root depth, and family relations. The Three Sisters are a well-known trio of plants that support each other when growing. Corn provides a solid trellis for the squash to grow up; the squash and corn provide shade for the beans; the beans fix nitrogen, and thusly provide nutrients for the other two. Everybody wins. This is how companion planting actually works. Plant shallow-rooted things with deep-rooted things; use plants as structures for other plants to grow upon; let root vegetables loosen soil for others; use legumes to provide nitrogen to compatriots; plant herbs to detract pests; plant flowers to attract pollinators; plant marigolds to push away nematodes, and so on.

Ah yes, marigolds. Everybody loves marigolds for all the wrong reasons. This is a myth I take no pleasure in busting, because marigolds are beautiful flowers, but they do not in fact keep most pests away. Reputed to perennially scare all manner of beetle, caterpillar, bug, and mite away from the organic garden, marigolds in fact do no such thing. What they do keep away are harmful nematodes that live beneath the soil and ravage nightshade (as well as other) root systems into obliteration. Root knot nematode is the main reason growing tomatoes is nigh impossible in New Orleans; and marigolds can absolutely mitigate and even cure your soil of this particular nightmare, but they will do little else but look pretty and perhaps attract a few pollinators into your midst.

Monoculture is a dangerous proposal on any scale, but it is also a term that is used hugely out of proportion in reference to the smaller home grower or urban farmer. To me, monoculture means acres upon acres of a singular crop as far as the eye can see. Monoculture does not mean a farmer filling one 4×30 foot row with kale. That said, if you are a home gardener, perhaps only growing one or two of any given plant, diversity in layout is a fantastic idea. Always diversity in layout is a fantastic idea, but if you are growing food to feed more than yourself, considerations must be made. A whole lot of pests and diseases, some visible, some not, affect specific plants or plant families and are spread by physical contact, above and below ground. Thus, the more diversity, the less chance of spreading pestilence and disease, pure and simple.

So like all religion, there is truth in the teachings but the laws shall lead you astray with their contradictions, suppositions, rigidity, and mirror hall illusions of perspicacity. The message is the truth, the word is the lie. Plant your plants together in harmony with one another, but let nothing but the plants, the planet, and your own perfectly cogent common sense tell you just how to do so.