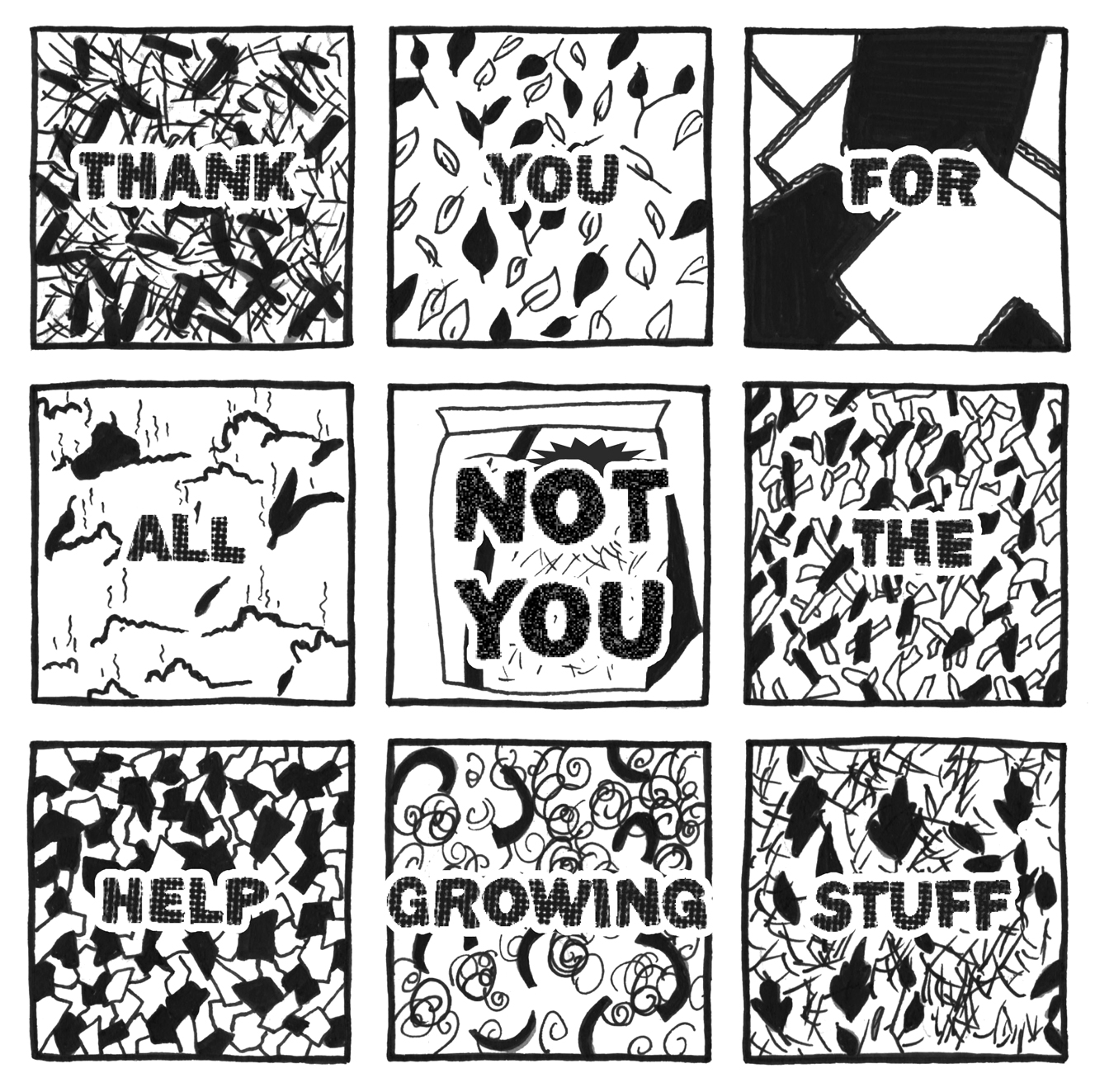 It’s one of those words that you only have to say three times before you question its reality. Mulch. Mulch. Maybe it only takes two times even. No? Mulch. Its meaning is as elusive as the sound of its voice, because truly it can be so many things. That is to say, physically it can be so many things; it manifests in many forms. Conceptually however, it is always the same thing that, when applied, accomplishes many lovely things for your home and garden. So what is it? It’s mulch.

Trust me, I’d be happiest keeping the deep-seated* mystery of mulch’s true meaning secret until the last paragraph of this piece, but you’d probably leave me for the internet before I finished this paragraph if I were to do so. Broadly speaking, mulch is anything you put on the ground to cover your soil from the elements. And while it’s not absolutely integral to keeping plants alive and happy, it sure does help.

The most obvious purpose of mulch is weed suppression. OK, but not really because the most obvious purpose of mulch is beautification, and the unknowing and ignorant landscaping masses probably think aesthetic pursuit is the true and only reason to mulch their garden beds. To those same masses, weed suppression is beautification, so my initial premise stands tall. Of course, suppressing weeds is about garden health as much as beauty, because fewer weeds means less competition for plants, more nutrients, more sun, fewer pests, less pain. Health is beauty.

Mulching does so much more than crush the competition and make a garden look good, though. It acts as a thermostat for the soil, shading it from the sun in the summer and acting as a layer of insulation in the winter. More than simple central air adjacent luxury, temperature regulation reduces stress to your plants’ roots and the ecosystem that supports them profoundly, effectively turning an open plain into a canopied rainforest.

Also, as rainforests do, mulch retains moisture in the soil, which is especially helpful during warmer times of the year when evaporation leeches water with a gusto fiercer than gravity, and can dry a freshly-watered garden bed before moisture ever gets a chance to get near plant roots. This most potent moisture retention can backfire when using the wrong mulch in the wrong place—but hold tight, we’ll get there soon.

The most ecologically potent and perhaps underrated power that most mulches have is their ability to nourish the soil in the afterlife. In most cases, mulch is made of biodegradable, carbon heavy material that eventually becomes soil itself, adding nutrients and fresh life to your garden ecosystem.

I have told you what mulch does, and yet still have not told you what mulch is, or at least not what mulch consists of, because ultimately, truly, in the end, that is a decision you must make for yourself. The world is full of possibility, but following are a few of your options: 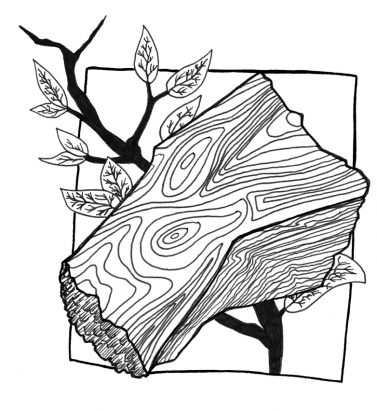 Extremely practical and prolific in our area, pine straw is probably the most ecologically practical, easy to purchase mulch to use for food growing in and around New Orleans. Available at most garden centers in both bales and bags, it is relatively cheap, easy to spread, and does all the good things mulch does. The bags are full of fine-crushed pine straw, which is much easier to spread in tightly packed home veggies gardens, but it is a little more expensive than the slightly more unwieldy bales of straw. Eternally versatile, pine straw is great for mulching shrubs and trees as well.

A somewhat broad stroke form of mulch, also known as cover crop or even green manure. Some puritanical garden guru out there somewhere may contend that these are three totally different things, but I counter that they are ruining everyone’s fun with their semantics. Green mulch is some sort of plant, usually leguminous, that you grow in your garden when you aren’t growing anything else, mostly during the deep summer around these parts. The plants cover the ground, suppress weeds, build soil, and add nitrogen as well as other nutrients when you aren’t actively growing food. Green mulch is also those same plants after you slice them up and leave them in place to die, using the “chop and drop” method. (There also happens to be a product made of greendyed recycled car tires called “green mulch.” It is not green mulch.)

My favorite free garden resource, cardboard is not great for using in your garden beds, as it is large, unwieldy, and generally too dense to encourage the kind of soil ecosystem vegetables thrive in. But it is wonderful for suppressing weeds around or under those beds. When colonizing new spaces, I think cardboard is the best way to keep weeds down and start fresh. I always lay a layer of cardboard under new raised bed gardens before putting soil on top, and along pathways before adding wood chips or some other mulch. Barring packing tape, it’s biodegradable too.

Most mulch eventually becomes compost, but finished compost itself can act as a mulch when there is no other mulch present. Half-finished compost is even better, doing all the lovely things that mulch does while actively feeding the soil at the same time.

These chunky mulches are usually pretty easy to find bagged in box stores, and while they make great hand grenades for children pretending at war, they are not particularly good for use in garden beds. Their tendency to retain too much moisture underneath them and their extra high levels of dense carbon matter promote the growth of fungi and microbes as well as anaerobic conditions that are prohibitive to smaller, green matter plants, which includes pretty much all the herbs and vegetables. However, the ecological conditions made by bark are perfect for mulching pathways and trees.

Something of a holy grail for urban farmers, wood chips are a generally free mulching resource that abounds in this city but can be very hard to lay hands on. Arborists are always looking for someplace to dump their waste for free; same goes for Cox, AT&T, Entergy, and so on, and yet without confronting a crew actively chopping down a tree it can be hard to get the stuff delivered to your door. Even then, the chips can prove elusive. When acquired, however, they are perfect for mulching pathways through gardens and all of the space surrounding growing space—though, like bark mulch, it’s not great for garden beds.

Another generally free mulching resource often readily available from carpentry shops and the like, wood shavings are generally too dense and woody for garden beds, and usually come in garbage bags, that is to say in quantities too small for heavy duty pathway mulching. Still, it’s a perfect resources for mulching trees and the like.

Using your own garden waste and leaf litter is the best ecosystematically conscious way to mulch your veggies; and grabbing bags off the street from other people’s yard-work is a great way to recycle an otherwise wasted resource. But both of these approaches do come with risks. Using your own leaf litter exclusively is a flawless and perfect approach to mulching food, but once you bring your yard waste (that is to say cut grass, pulled weeds and the like), you run the risk of introducing all sorts of unwanted seeds, weeds, and disease into your garden soil. In the case of other people’s yard trash, there is the added danger of strange garbage, which probably won’t hurt your beds but might hurt you in the process of distributing it. Just be aware of broken glass, needles, and the like when using this underrated resource.

Most box stores have pine straw, but it’s rarely merchandised anywhere obvious, often hidden and only available by request. What they do have, out in the open, front and center, are thousands of bags of utterly inorganic strange composite material mulches available in all sorts of unnatural colors for the modern landscaping aesthete. These are of a low quality, generally bad for the environment across the board, potentially toxically so, and anyway they’re kind of depressing to look at when put to work in the field.