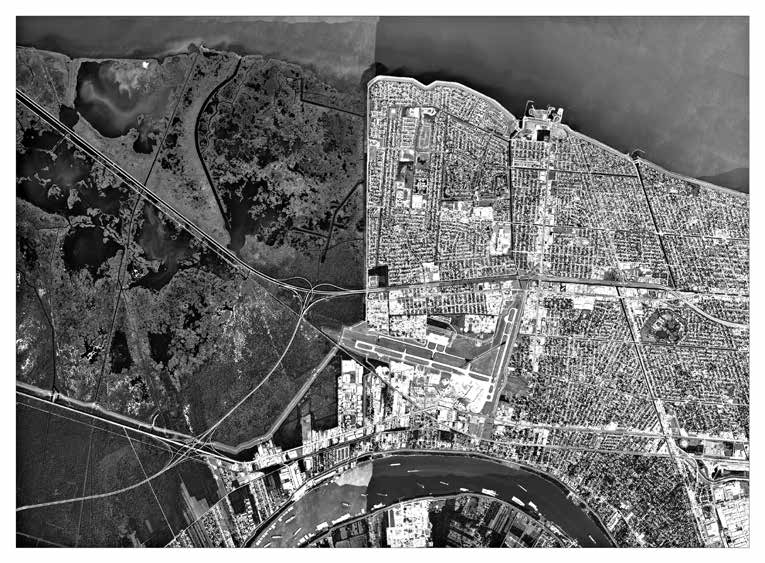 The southwestern rim of Lake Pontchartrain, commonly referred to as the German Coast, is a composite of landscapes both real and imagined, their details spread across plat maps, sunken concrete, and digital artifacts. The landscape of today is a broken swamp, like many others in South Louisiana. The cypress of Maurepas has been heavily lumbered, leaving strange radial patterns etched into the earth where the trees were felled. The once robust bottomlands of Labranche were similarly gouged in order to construct the Interstate 10 highrise that passes from Kenner to LaPlace. These channels have introduced saltwater, and a familiar process of erosion has played out across the region.

In the 1970s, as residential demand in St. Charles Parish increased, private real estate developers envisioned an opulent lakeside suburb that would bury this denuded wetland, complete with tennis courts, shopping malls, and broad tree-lined boulevards. They began purchasing tracts of land deep in LaBranche, with a belief that the Army Corps of Engineers would build a hurricane protection levee along the shore of Lake Pontchartrain, thus making their properties eligible for federally subsidized flood insurance.

One of these developers, the Walker Land Company, sold many parcels in an unimproved stretch of cypress swamp they designated the “LaBranche Industrial Park.” Soon after, the company was under investigation by the U.S. Secretary of Housing and Urban Development (HUD) for withholding certain particulars of the development before selling the properties, such as omitting major details in the property report to HUD, including plans for the construction of a marina, boat-town, golf course, tennis courts, motel, and regional shopping center—all promised in advertising. They were also cited for failing to address who would be responsible for draining lots below sea level, as well as neglecting to detail how access to these lots would be achieved, since there weren’t any streets or roads.

Ultimately, wetland preservation policies forced the Army Corps to reroute the levee, which now runs roughly parallel to Airline Highway, less than a quarter of a mile north of the road. This has made development of the wetlands financially infeasible. Individuals who bought property from the Walker Land Company and other developers now own parcels that are submerged beneath as much as 15 feet of water.

While Walker Land Company and other LaBranche developers were mired in this controversy, similar swampland suburbs were being constructed elsewhere along the lake, such as the subdivisions of LaPlace that now reach deep into the shoreward floodplains. The line between Jefferson Parish and St. Charles Parish is stark. Jefferson Parish, protected by the levee system, is thoroughly developed, with neighborhoods and shopping centers pressed tight to the parish line. St. Charles remains a wetland from Airline Highway to the shores of Lake Pontchartrain.

The fast and loose nature of development throughout the postwar era reflects the general amnesia that our culture often experiences with regard to natural disasters. A few generations before this rampant speculation, in 1915, a hurricane came out of the West Indies that hit the Gulf Coast with force, spared New Orleans, and cut a line across Lake Pontchartrain. It built a surge as it bore toward the west side of the lake and exploded onto the German Coast with indescribable fury, annihilating the small settlements of Frenier and LaBranche. Survivors describe their elevated homes and fishing camps crumbling in the face of overpowering wind and persistent surges of water that climbed as high as 20 feet. Many sought refuge in a train passing along a nearby track en route to Harahan. The train moved slowly as it made its way east, blowing its whistle to gather survivors. Residents from all parts of the swamp struggled toward the vehicle in whatever manner they could, whether by boat or by swimming through the devastating waves. Soon, however, the eastern stretch of the track washed away with the onslaught of the storm. As the train began backing up in the direction of Hammond, the western track blew away as well, leaving the asylum seekers stranded on an island of track bed, huddled in the train cars, some kneeling in prayer with their knees submerged as the water continued to climb.

They waited there through the long night as the squall lashed the world around them, until stillness slowly settled with the dawn. Those who were able to survive outside the train did so by hanging onto rooftops and trees that weathered the force of the elements. These lucky few gathered in a daze and ventured into the swamp to assess the absolute devastation of their homes, digging through submerged refuse to uncover body after body. They floated the corpses on improvised rafts to a graveyard in the forgotten village of Waggram. A small band of residents walked to New Orleans to alert a public that was completely unaware of the tragedy unfolding to the west. No structures in Frenier and surrounding communities were spared by the disaster. Over 275 Louisiana residents were killed, a large number of the casualties concentrated in St. Charles and St. John Parish.

In 2012, Hurricane Isaac, following an almost identical course to the 1915 storm, deluged the German Coast again. We visited the Wetland Watchers Park on the shore of the lake a day after the storm passed. This was the very place where the small community of LaBranche once stood, and where the Walker Land Company envisioned their Bayou Beverly Hills. The sky was utterly clear as it often is in the wake of a major hurricane. The lake was still, the air sweltering and alive. Whole ridges of mud and detritus covered the landscape. Parking posts from the nearby boat launch had come ungrounded along with their concrete anchors and lay like helpless automatons paralyzed by the heat. We witnessed a more exaggerated version of this phenomenon a few days later while visiting Plaquemines Parish, where entire concrete tombs ungirdled themselves from the flooded earth and tumbled with the force of the waves, landing in unbelievable postures, some standing lengthwise against oak trees or jumbled in a heaping mess on the river road, half a mile from the cemetery. The concrete wasn’t enough to fasten these structures. The ground absorbed the water like a sponge until there was no easy distinction between ground and water.

The subdivisions of LaPlace that reach into the floodplains of the lake were badly flooded as well. Piles of sheetrock and furniture lined each curb that we passed. Being that the land is a literal floodplain covered in concrete, the water stood in the streets for at least a day. We drove gingerly through the streets to avoid causing a wake. The aftermath was sodden and ugly, and possessed the familiar stench of Katrina, but a thought persisted in our minds, and in our conversations, and even in our footsteps as we crossed haphazard barricades of filth with heads pointed in deference to the exhausted residents that we passed. The ghosts of 1915 were with all who tread through the lingering atmosphere of Isaac, begging us to ask: what would the shores of the lake have looked like had the speculative housing developments of LaBranche been built?

Breonne and Darin will be presenting these and other histories of development, destruction, and abandonment at the Aquarium gallery (934 Montegut St.) on November 14th as part of their interactive, multimedia gallery installation “Between Highways.” The opening will be 6 to 9 p.m. For more info check out verylongroad.com