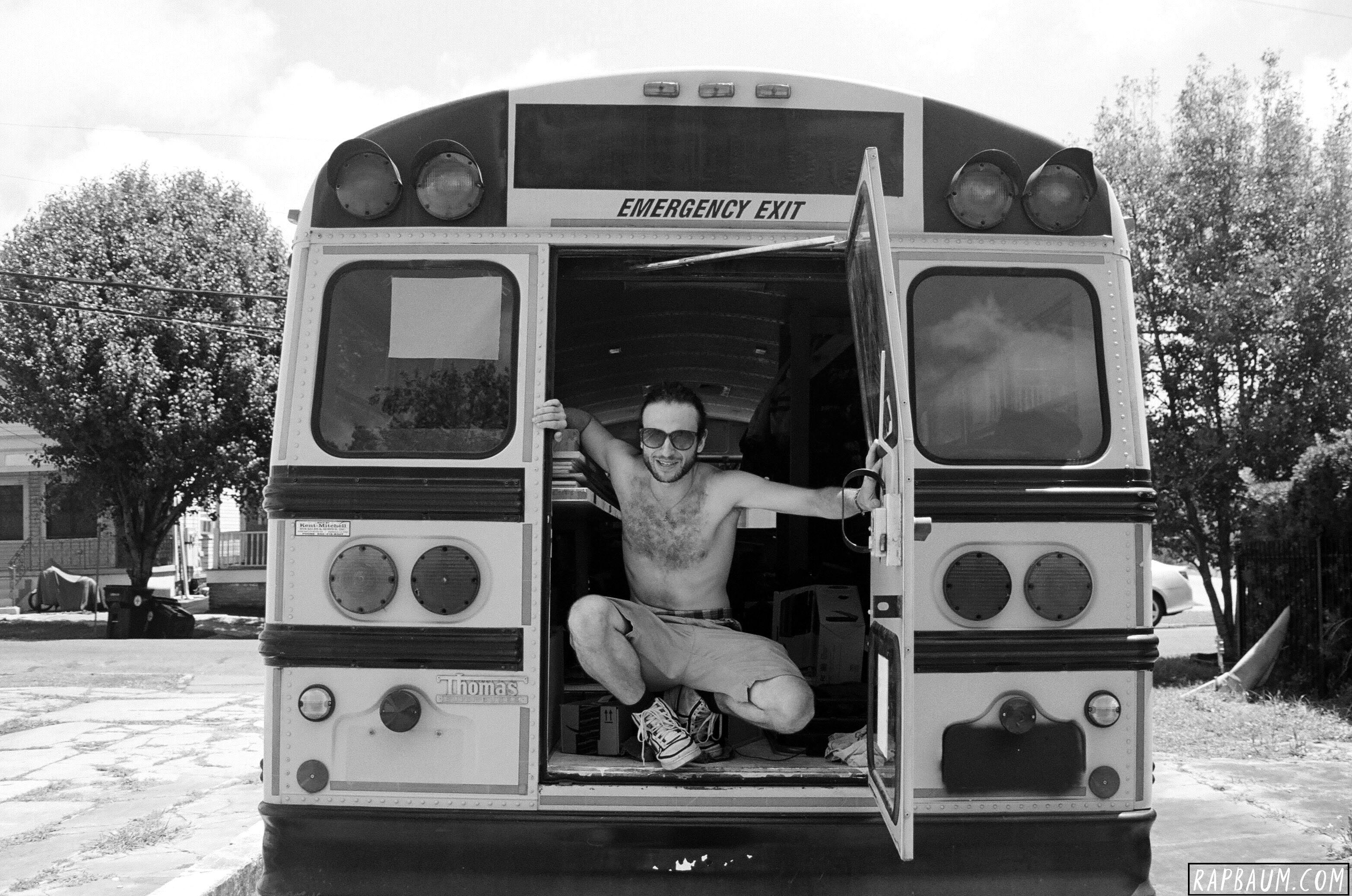 By RENARD BRIDGEWATER for MaCCNO March 2020

Soul Sonix Studios (say that three times fast) sits in the rear of an extended shotgun in the Gert Town area of the city. An annex just past the kitchen follows a long hallway of white walls and hardwood flooring where you discover a quiet, yet buzzing room of sounds illuminated by cool-colored LED lightstrips. It’s here that I meet the studio’s owner, New Orleans-via-Philly rapper, producer, and DJ, Austin Rapbaum. Hip-hop as a cultural artform isn’t new to this Loyola University alumnus, who got introduced to one of its pillars—breakdancing—at the age of six. Rapbaum went on to be mentored throughout his childhood and adolescence by Philadelphia b-boy Cesa, who provided a deep dive into hip-hop’s history and music for his young student. At his mother’s request, Rapbaum auditioned for and was accepted into CAPA (The Philadelphia High School for Creative and Performing Arts) but didn’t believe in dance as a sustainable livelihood because of its physical demands and lack of longevity. “I had known what’s possible in the dancing realm; and what I knew was that my career was going to be very short if I ever got hurt in any type of way,” says Rapbaum. Despite this conflict, he began working as a professional dancer doing private events and parties, where his boss taught him about some of the inner workings of DJ’ing to further his dancing prowess. During this time, writing poetry also became a permanent fixture in his creative upbringing with youth slams (among other public performances) taking place regularly. He and his brother were approached by a peer after performing during their high school’s assembly, who asked if they had ever rapped before. Three beats were provided and thus, three songs created. Although their recordings didn’t get a thumbs up, the exercise directly affected the young creative. “I had bought a little USB mic to plug into my computer and… the process of learning that thing made me infatuated with recording music, and that was kind of like the moment,” reminisces Rapbaum. Cesa’s tutelage eventually bore fruit and inspired the emcee’s current career path.

Once arriving in New Orleans, the artist began working at Vital Sounds Recording, Loyola’s student-operated recording studio. It’s there on the College of Music and Media’s third floor that his budding friendship—and education from—constant collaborator Josh Gotoy formed. A good engineer, much like a good producer, can help turn the intimidation and formality of a studio space into one that’s inviting and energetic, where an artist’s ideas can flourish and be best represented. Working with a myriad of on-campus musicians, bands, and artists helped develop Rapbaum’s engineering skills. As he puts it, “It really taught me a lot about how to make artists comfortable, which is the most important part of the writing process.” While doing shows, learning more about engineering and music production, and maintaining the studio’s schedule, the pair realized that the university’s recording environment was neither the most ideal nor the most comfortable for their clientele. After jerry-rigging some box springs, screws, and a glass window into a recording booth, Rapbaum “decided to buy a lil’ mic and… just start recording people at my spot, just in my house.” The money made was reinvested into better equipment, leading to Soul Sonix, with expanding bases in New York and Los Angeles as well. He is appreciative of the space (also known as “The Lighthouse”) which has welcomed the likes of Dee-1, Alfred Banks, $leazy EZ, etc., declaring, “Soul Sonix is like one of the best things that’s ever happened to me in my life, man.”

Many of Rapbaum’s skills have been gathered organically, all interwoven through the common thread of music and flowing from one to the other via his proximity and exposure to the various artforms. Becoming a producer has been no different. Listening to “old” Kanye while growing up enhanced his ear for samples and may have inadvertently led to him releasing a daily beat online. As of press time, in true “Doin’ five beats a day for three summers” fashion, Rapbaum has been creating and dropping new production of various styles and genres for the past 468 days. He cites J Dilla (one of music’s most revered producers) and influential author/journalist Malcolm Gladwell (best known for his 10,000 hours of mastery concept) as the key sources of inspiration for this artistic output, and plans to continue the series until he hits a thousand beats. Ironically enough, the genesis of these releases can be found in the beatmaker’s procrastination. “I would get asked to be put on this thing [producer showcase], let’s say 20 to 40 days before it was going to happen or whatever. So, I could have just compiled a bunch of beats, but what I always end up doing was not doing that…” explains Rapbaum. The end result would be 30 brand new beats made two days prior to the showcase. With most clocking in under a minute in length, these Ableton-based creations range from salsa-inspired staccatos to Migos-influenced trap-hop bumps that have challenged the producer’s consistency and assisted him in maintaining a rigid structure. “It’s made me better, you know?” Rapbaum says, adding, “I mean in a different way than I wouldn’t have thought, because it’s made me realize that as someone who works on music every day of my life, I never realized how hard it is to actually make sure you make a beat every single day without fail.”

The world can truly be an indie artist’s oyster. The ability to freely release music, distribute it worldwide at a low cost, and book your own tours without the assistance of record label personnel can be a very rewarding, yet taxing endeavor, both physically and financially. The objective of touring is two-fold: gain a profit and reach new fanbases. Another goal is to stay in the green with minimal overhead. From a logistical perspective, figuring out lodging, food, and travel expenses are some of the most important factors to proactively strategize for. In a recent DJBooth article titled “This Is What Touring as an Indie Artist Really Looks Like,” indie hip-hop insider Damien Ritter emphasizes this point by saying, “It’s not just understanding what you’re making, it’s also understanding what you’re spending. You have to budget your tour appropriately.” It seems Rapbaum has given this some considerable thought as well in preparation for this year’s trip to South By Southwest by retrofitting a 30-foot school bus into an all-inclusive tour vehicle called “The Beach House.” It includes a fully operable, solar-powered electrical system, kitchen with a three-burner stove, and convertible seating that doubles as bedding, constructed by his own hands. Speaking with Rapbaum, it almost feels as if he and Ritter are engaged in an active dialogue when he explains, “So the idea about the bus is to really help sustain what is the hardest thing as an independent artist, which is touring, right?”

Speaking of sustainability, regardless if you have the comfort of a bi-weekly paycheck or work for yourself, the struggle as well as its accompanying hustle is all too real. Many of Rapbaum’s skills came not only out of his love for the culture but out of necessity. Learning how to deejay during his adolescence came in handy as the accumulation of shows during his undergrad years called for a tried and true vibe controller. Over the years, he’s opened for Devin The Dude, Blackalicious, and Wu-Tang affiliate Supreme. The here today, gone today nature of the music industry is a tricky tightrope for aspiring artists. However, you get the sense that Rapbaum is a student of the game when not only naming Kool Herc as one of his heroes but also observing how he’s effectively used all of his acquired skills over the years to not only sustain himself but to ultimately succeed. The jack of all trades confidently states, “First off, I’m completely self employed, so if I don’t know how to do it and you’re willing to pay me, I’m going to learn how to do it, guaranteed.” Hustle hard indeed.

Photo courtesy of the artist