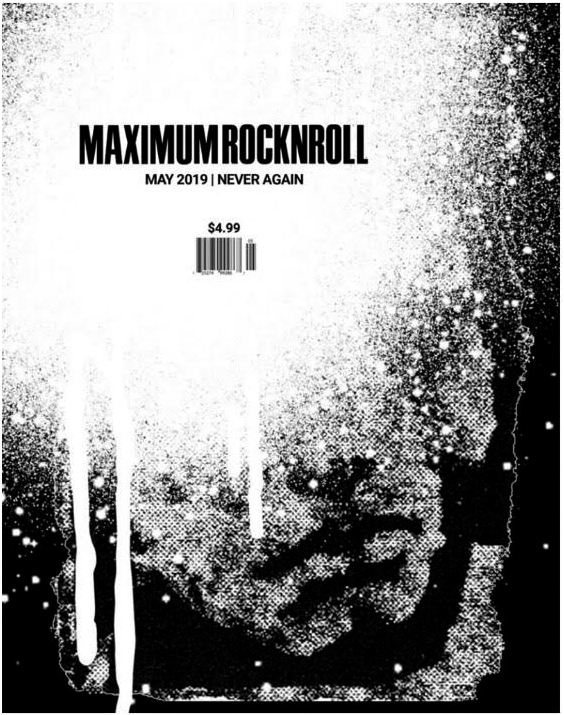 Things have been pretty hectic around AG HQ these past few months, so I haven’t had time until this issue to take a minute and reflect on the recent shuttering of an iconic print institution. No, I’m not talking about the Times-Picayune—er—Nola.com. They’ve been dead to me ever since they axed the daily print edition in 2012, depriving my grandmother—and what I can only imagine were a lot more seniors and other people who still rely on print—of her daily news. No, I’m talking about the end of Maximumrocknroll, that definitive publication for all things punk rock (which is why you’re either ultra-familiar with what I’m talking about, or have never heard of it). Published monthly on black and white newsprint, it featured columns, interviews, news, photos, reviews, and other bits and pieces that focused on an international underground unified by loud, uncomfortable music and the bone-chilling realization that the world as we know it is profoundly fucked, and we need to talk about that. Sound familiar?

Based in San Francisco, MRR was born out of a pre-existing radio show in 1982. And though it came out of the Bay Area, its scope was international in scale, as was its distribution. As a properly disillusioned adolescent growing up in New Orleans, the pages of MRR broadcast the exploits of heroes from far away places. For years, I read it religiously every month, enthralled by tales of bands and scenes that, admittedly, all seemed to be way more happening than our sleepy Southern town. (Some of y’all can’t appreciate how vibrant things are now; but “back in the day,” most New Orleans underground bands lived and died within the city limits, without ever touring or putting out records.)

MRR had a reputation—either as accolade or insult—for being punk “purists.” For the longest time, their editorial policy banned any coverage or advertisements from any band or record label that worked with major labels, their subsidiaries, or distros. They also had an infamous “no barcode” rule—which is why, if you’ve picked up their last issue with those oh-so-corporate stripes front and center, you may guffaw at the audacity of that final, self-inflicted wound.

I was most dedicated as a reader during Nirvanamania, i.e. the early ‘90s, when music industry behemoths were chewing up and spitting out band after band, from Green Day to Jawbreaker—whoever might recapture some of that grunge/punk profit magic. The letters section was always filled with vitriol on all sides, from those claiming that MRR was trying to police the underground, to those who thought the publication didn’t go far enough. That conversation about what is and isn’t considered punk—conducted on a global stage—raged on in the pages of MRR right up to the end.

Fun fact: it was in 2002 that I submitted an ill-fated scene report that exposed my naivete and an immature writing style, garnering the wrath of not only Eyehategod (which you might’ve read about in AG last June), but Jim Pict, whose band The Picts I had summarily dismissed for opening for the Dead Kennedys “reunion” band at the Shim Sham club (now One Eyed Jacks). What an asshole move that was, especially considering Jim was probably one of the only guys in New Orleans who actually cared about that scene report. (And if you ever see this, Jim, I apologize. It was a good lesson to learn as a writer, but I’m sorry it had to be at your expense.)

Despite its rules and staunch positions, the best writers of MRR excelled at expressing the deeply personal, showing how underground culture comprised three-dimensional human beings with habits, follies, and predicaments, proving that answers to the burning issues of the day don’t always come so easy. One column I especially remember, penned by Larry Livermore (one of the divisive punk elders published by MRR), dissected gentrification—and how Judy and Johnny Punk moving into low-rent neighborhoods were the first wave of that menace. It might be the kind of analysis we take for granted today in New Orleans, as we discuss this issue on a daily basis. But for a lot of young people, MRR has been the gateway to reading and thinking about these bigger issues.

I think that’s what I loved most about MRR—that it pierced its own bubble, often and on purpose. It’s a powerful thing to understand that even a scene as righteous and freeing as punk rock can devolve into just another constricting, hierarchical clique. That when codified and commodified, it can be as regressive and harmful as any other closed group. Punk rock (as expressed in MRR) taught me that any culture—or philosophy, religion, or publication for that matter—that accepts its own limitations and questions itself on a regular basis is one worth investing time, labor, and passion in.

You can be punk in spirit all your life, but it’s harder to maintain as a specific cultural identity. In that way, it’s no more special than any other look you might try on over the years. My taste for aggressive music, splashy band t-shirts, and Manic Panic has mutated to appreciate subtler tones, so like a lot of aging punks, I lost touch with MRR over the years. I’ve still picked up a copy now and then, and one thing I take great inspiration from is how MRR has lasted longer without its founder, Tim Yohannan (who passed away in 1998), than with him—a testament to his vision and the core mission of the magazine.

So, despite its West Coast pedigree, MRR is one big reason you’re holding this copy of ANTIGRAVITY in your hands right now. Because MRR was so formative in those adolescent/high school years, and because that magazine taught me that punk more than anything is about being honest, and not holding back because of politics or social norms or customs, this ending of an era feels bittersweet. I get the impression that the last round of coordinators squandered a once-in-a-lifetime opportunity. MRR was, for lack of a better word, a global brand with goodwill and a loyal readership. It takes a lot to build that up over the years and it doesn’t sound like the decision to cease the print version was one made out of a natural progression of MRR’s future. And while it will continue on through various digital platforms, nothing will ever compare to the raw intimacy of reading one of their thick, newsprint issues—especially for their substantial incarcerated readership.

But I also know that things change. They are born, they grow, they wilt, they die. It’ll happen to me, it’ll happen to you. It’ll happen to ANTIGRAVITY. So I won’t linger on what could’ve or should’ve been for MRR. They had a good run, and of course, there are already dozens of publications still in circulation, ANTIGRAVITY included, with the DNA of MRR flowing through their veins. —Dan Fox