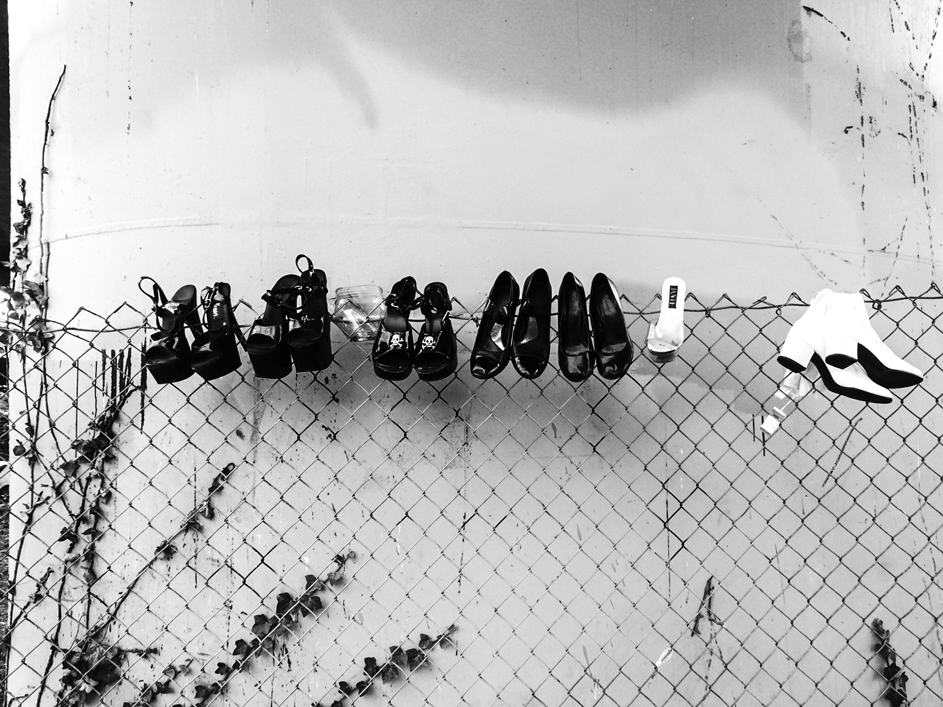 We’ve asked Lyn Archer, who wrote “Stage Name Delta: Legislating Lust and Labor in the Vieux Carré” for our August issue, to return as a regular columnist to cover sex work and the service industry. Welcome aboard, Lyn! —Ed.

Just after Halloween, All Souls Day, and Day of the Dead, is my one-year anniversary living here in New Orleans. Sex workers share an understanding of the kaleidoscopic nature of time. A plan becomes a memory of the future. This is how I got to town.

Autumn in northern Maine is marked by a change in tone. The leaves of the low-bush blueberries turn suddenly red, the cattails are white flags. The farmers burn their fields down to the granite. Apples fall along the shoulders of the road, deer come out to eat. Hunters wait under gambrel roofs, scopes pointing out. Fall is closing in on itself, on the island, and on me.

I’ve just been laid off and, scrambling to find something else, I pick up a couple of morning shifts at a historic bed and breakfast, two towns away from the island where I live. At dawn I drive over the Reach—a linked series of bays and river mouths cut through by a road. Thick, gray-pink fog blends into the boulders that part the water from the road’s shoulders. The striations in this region’s granite are said to run on the compass line; lying on the rocks supposedly heals people, realigns their energy.

Six months earlier, in the spring, my friend helped me stack as many of my things as we could fit into a 5×7 storage unit. The rest went to the curb. Moving across the country for a full time job, I made myself promise I wouldn’t strip anymore. In a slant of light under the highway, I hung up my heels along the fence. I stepped back from the curb to snap a photo. A man on a cruiser bike shuffled up, asked me for a dollar. Julia drove me to the airport while we chanted along to a Springsteen tape with a worn-in ribbon. Oh oh oh, I’m on fire. I’m going down, down, down.

In the mornings, I serve breakfast for the last tourists of the season. In the afternoons, I make elaborate exit plans, in a café facing the town square. The bronze statue of a stonecutter kneels in the picture window. When the café closes, I move my “office hours” to the public library. I’m befriended by a poet, Henry, who writes there whenever he isn’t driving a bread delivery truck between the island towns.

Henry takes me to a going-south-for-the-winter dinner party in a mansion overlooking the Reach. Oversized red wine glasses, full and empty and full again. The hostess turns to me. What brought you all the way here from the West Coast? Are you staying the winter? Henry will stay on at the bakery; I’m one of the “summer people,” admit my plan’s unformed. Southern inflections appear in our hostess’ voice, and catch on in our own. She tells us about handing tobacco as a child in Virginia, how Philip Morris paid for her law degree. Companies just don’t take care of their people the way they used to. We nod.

We drive home drunk, the road twisting open like a paperclip. I turn to him. All summer, people have been asking me why I’m here. Have you noticed? The big moon wheels in the windshield. There’s this subtext. If I can’t give a reason, I don’t belong. He shrugs; well, she did say we are welcome in New Orleans anytime. To swim in her infinity pool.

Five summers before, my best friend brought me here for the first time, hitchhiking the half-day from Portland to the island where she lived as a child. We snapped each other’s Polaroid beside fiberglass statues of lobstermen, patted the heads of bearskin rugs in the flea market. Standing beside a falling-down Victorian with our thumbs out, a woman offered us a ride accompanied by a reprimand. Bad things happened to my sister. Promise you won’t do this anymore. She dropped us off at the ferry terminal.

We sunned ourselves beside rain-water filled quarries, cracked crab-claws from five-gallon buckets, lay languid on the bows of wooden boats. In the high grass, she dabbed me with brown, gold, white tempera paint and took my photograph, saying, you’re just like a deer… maybe a cat. We aligned ourselves with Norman McClean’s vision: “in the world of slow time, truth and art become one.”

The night after the dinner party, I am driving home alone, when I see a form fallen on the yellow centerline. I put on my flashers and open the driver’s side door. I take tiny steps towards her—a deer, about my size. I wave my hand over her open eye. Nothing. I’m filled with the sentiment that I could startle her back to life. I reach a hand gingerly towards her rib cage. Nothing. I stand there for a long time. Nothing’s visible. I grab a pair of ankles in each hand and drag her past the curb.

I wake up in the afternoon, chilled, compelled to leave the house. I sit in the basement bar of another historic inn. A man side-eyes me from a corner barstool. I can’t recall the last time I convinced a total stranger to buy me a drink. He says he is from Portland, Oregon. I circle in on his coordinates. His home, as it happens, is two blocks from where I used to live. There used to be a strip club near there, he says offhand. I expect him to give the name of my first club, a tiny dive with only four girls in the rotation, named after the Devil. Though I’d heard that it used to be called the Silver Dollar. It could have had other names before. What was it called? I ask. The Calico Cat. What was it like? The girls were all covered in tattoos. He looks me over. Not like you. Why do you ask? He is turning the questions back at me—So what did you do in Portland? How did you get all the way up here?

Henry texts. I am three or four deep when he comes to get me. Let’s get out of here, he says. Let me make you dinner. The man’s attention has wandered; I close my own tab. We leave the oven door open to heat the cabin. I curl up under a stack of quilts. I’m sorry, that guy really rattled me somehow.

At the library, I find myself wandering through Facebook for the first time all season. There’s an invite. A stripper friend of mine has died. The memorial is tomorrow, at our first club, where we worked all of our shifts together. A flight from Portland, Maine to Portland, Oregon is a thousand dollars, an amount that seems astronomical. Not if I was stripping. I could be with her, with all of them, in a heartbeat. Though I guess I already would be. 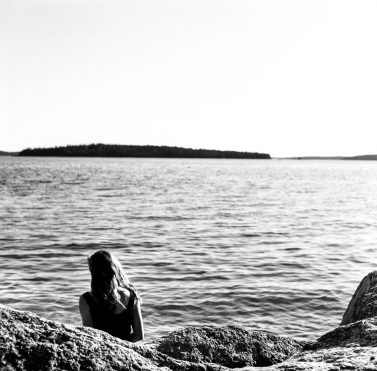 We were the same age, both Aquarius. In our tiny dressing room, she dressed me in her clothes, all a size too small for me. She would put on a pair of bunny ears and dance to “Hey There Little Red Riding Hood,” both the Animals and Stones versions. She taught me to twirl on the pole, a carpal tunnel brace on her wrist. Her hands were always cold. We’d share a cab, stop to wander the bulk aisle of the 24-hour Safeway or shout into the Taco Bell drive-through window.

I Facebook chat with another girl. I’m not sure exactly what happened, she says, she had been clean for a few years but was still partying a lot. I heard that her organs failed. In the dressing room, she rotated through menthol cigarettes, cocaine bumps, vodka with cranberry juice. She’d curl up on her gym bag, eating bags of gummy worms to try to keep weight on. Haunted by heroin’s absence, she’d stay up at night, reading thick hardcovers that the other strippers lent her.

We’re collecting pictures for the memorial, if you have any to send. One of the few photographs I have is a staff portrait with her in the center, her shirt pulled up to her sternum. I stand behind her, a cowgirl bandanna around my neck—sometime around Halloween. I write to each person in the picture, one at a time. I’m sorry. I wish I could be there.

The lights dim and flicker in the library. I get in touch with the last stripper in the picture. She’s working at Cheetah’s in Hollywood. I can’t stand Portland winters, she says. I’ll never go back. In her profile picture, she hasn’t aged a day. She stands on a red velour sofa, reaching for the huge disco ball above her head, hair spiked as high as ever. The women who I most wanted to be near, the reason I started stripping at all. Anywhere. Anytime. I can’t make it to the memorial, she says. But I’ll be doing a death dance in her honor. The power kicks off.

A pentecost of leaves fly around the road. The sky is asphalt. I pass a downed maple tree limb, tangled in the power lines. The electricity is out across the island. I use my phone as a flashlight and light candles—eventually, these will burn out too. I reach for the reason for my detour, come up with nothing.

I pack my things in a day, drive along the Hudson, the Shenandoah. In Black Mountain I stay in a friend’s house where a costume party took place the night before. Candy dishes and bottles crowd the upright piano. Her friend insists that I have to meet his friend in New Orleans. We used to bartend together in Asheville. Here, I’ll Facetime her right now—it’s our tradition. She waves into the screen from behind her bar. We all do a shot together. See? She’s the best. Find her.

The best view of Bourbon Street is to look both ways and cross to the other curb without stopping.

Her bar is on Rampart Street across from the park. The Saints game is on the projector, the athletes smash into each other. The rain comes down on a diagonal. I had intended to ask her for a job, but can’t get the words out. My only “bartending experience” is letting my strip club coworkers take body shots off my décolletage, after hours. She tells me, the best view of Bourbon Street is to look both ways and cross to the other curb without stopping. I thank her and wait in the cut-corner doorway for a gap in the downpour.

Right now, in Maine, fishermen are pulling their boats from the ocean, sheltering them in barns painted charcoal and oxblood. I “Yelp” strip clubs. Two dozen red teardrops appear around me on the map. I pick the one with the most stars, and dial. You can come in tomorrow. What stage name do you want? I’ve had other names at other places. This time, I hear myself say Calico.