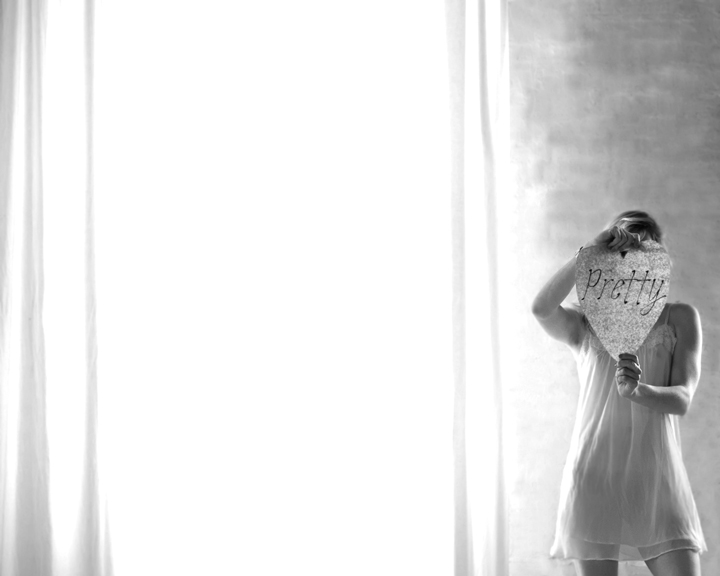 During the last weekend of 2016, I noticed something I hadn’t before. New Years, it seems, has become the new Valentine’s Day, and the strip club is full of couples. Many of my coworkers say couples are some of the worst customers they’ve endured—some won’t approach them at all. I’ve always said I like dancing for couples. Tonight, though, I find myself ambivalent.

Hey pretty lady! She’s in a bouquet of Mardi Gras beads and holding a pink plastic cup: tall, with a heart projecting from the center. We’ve never been to a strip club before! she says, brightly. Well, you came to the best one. I nod to where the pole vanishes into the second floor. There’s more to the club—I’ll show you around. We climb the stairs to the bar, where he orders a round of shots, which she and I both fail to drain. Be careful with those hurricane drinks, they’re stronger than they taste.

I mostly got it for the cup. Is that dumb? I suck on a lime and push my glass aside. A set of floodlights shine across the bar, for tomorrow’s segment of Dick Clark’s New Year’s Rockin’ Eve. It’s cold out there. I stroke his vest, made of wooly faux fur. We’ll warm him up. I like dancing for couples. She smiles at him. He shrugs. It’ll be fun, she says. He pulls out a card and I shake my head. Oh, we need cash? I’ll get it. Across the bar, she looks back from the ATM and I wave. I don’t know why she’s doing this, he says. I think she wants to make me uncomfortable.

She’s beautiful. You’re lucky. She returns to the booth with two 20s. I take his hands in mine and put them in hers. You’re stiff. Get close, you know each other. I pull her legs onto his and drape myself over their lap. I’m glad I get to be your first stripper in your first club. She smiles. Eventually, he smiles back. I haven’t shown you everything. We have champagne rooms… I hear my name on the mic. Calico, you’re two away from the main stage.

She’s in cigarette jeans, leaning over the rail, flanked by three men splashing money around. I scale the pole to their eye-level. Hey pretty lady! Is it raining yet? The loudest of the four, in a navy-blue dress shirt, motions me up. I climb the stairs. Shots. Cheers, I say, to living single, seeing double, sleeping triple. Four plastic cups hit the bar top and I slide mine out of sight. He turns to me.

Let me ask you a question.

You’re hot. You know that right.

My wife’s angry at me. I try to meet her eyes; she’s leaning into a joke made by the others.

She seems fine to me.

She leans back on her barstool, long legs stretched out. She’s pissed. I can tell. That’s her way.

I study the pattern of his shirt: a grid of white, tiny stars. She’s beautiful. You’re lucky.

Just… listen, how do you do this? Do you like this?

I mean, the guys in here, the hours— anyone would get jealous.

It’ll be fun. There’s more to the club. We have champagne rooms.

But how do you, you know, have a normal life?

You mean how could I have a boyfriend when I have this job.

On the balcony, the stripper beside me holds a plastic bag of beads, slinging them down upon the street. Bachelor party men in jordan-almond colored shirts; bachelorettes in veils that flash with little lights. Tommy Bahama’d swingers in sets of 4, 6, 8. Honeymooners in matching tees with arrows pointing. Barkers twirling signs: eat a bucket of chicken, sing karaoke, drink a hurricane.

The last wedding I attended was back west, in California. Three of the bridesmaids were eight months pregnant. I sat on the far edge of the pool smoking a cigarette as they pushed their bellies together for a photograph. The ceremony was set on a cliff over the Pacific, the horizon fading into nothing as the fog turned up like a bedsheet. We drank prosecco in plastic cups and I left when the moon was high. At the rental house, I stacked kindling in a fireplace made of river stones, undid my heels and let them drop.

Oh! I didn’t know anyone was here. She was standing at the kitchen door, a dish-towel draped over her belly. Did I wake you? I thought I was alone. I left early. Thought I’d try to clean up a little before they all got back. They’re sleeping out tonight. Aren’t you tired, love? You’re working at this hour? That afternoon I’d taken her picture, serene in the window light, cat-napping on the leather sofa in the Great Room.

It feels better to be on my feet.

Are you not feeling well?

I’ve been nauseous. I was in bed with the dogs, trying to rest.

Does your guy know?

I figured he’d be going hard so I took the truck.

Their wedding had taken place that spring, on a neighboring beach where I’d played as a child. I thought about her husband, a half-hour ago, buoyed up on the shoulders of his guys, necktie around his forehead, unbuttoned and drunk on the dance floor of the big tent. I thought about her, shifting gears down Highway One, stopping on the shoulder of the road to be sick. I thought about the dogs, one black, the other brindled, at the door with ears up, licking her bare feet and trailing her across the slate tile, curling around her in the unmade bed.

She’s in a cocktail dress of a tertiary color between cerulean and turquoise. He holds out his cigarette pack to me. I touch the lapel of his jacket and tell him I’ve been trying to quit since the autumn.

We were at a wedding.

I see that. He smiles, she doesn’t.

We aren’t fancy dress-up people. He passes the cigarette pack to her. I own a restaurant.

Hey, pretty lady! I cup my hands over the lighter as she flicks it. You know you could work here if you wanted.

Well… I used to be a stripper.

Takes one to know one. The light catches. She’s beautiful. You’re lucky.

He found me at the strip club. He took me home and fed me lobster tail and steak.

Two months later I was pregnant.

We have a two year old, a daughter. He pulls out his phone. And she’s got an older one. They’re cute… Here, I’ll show you.

She doesn’t want to see a picture. Jesus. I’m getting a cosmo. Do you want something? Is your tab open?

Do you want to keep it open?

I need a whiskey. He rummages in his jacket and holds out his card.

But do you want to keep it open?

She holds her cigarette out to me and steps in.

We’re taking the kids to Montana, he says towards the skyline. They’ve never seen snow before.

Tonight it’s just the two of you, though.

We have a hotel. What time do you get off?

Late. You really met at a strip club?

I took one look at her and knew she was mine.

I like dancing for couples. I bet she has some sexy stripper moves.

Not anymore. I treat her right.

New Years, it seems, has become the new Valentine’s Day, and the strip club is full of couples.

She returns, trades him his drink for his cigarette. A security guard taps her: no glass on the balcony. My arm circles her waist. Ready? She flicks his cigarette over the edge of the rail. We’re gonna go sit at the stage, she says to him. Sorry. Here. She puts a wad of singles in my bra and swats me on the butt. Go make money.

On the bar top, the pink plastic cup stands where it was left. By now they will be further down the street, ordering something else, torrid with unsaid thoughts, speaking in telepathies, the street a dissonant swirl. I walk downstairs to the patio.

She’s in a short skirt, slouching, searching her bag for her phone, cigarettes.

Hey pretty lady! Got everything? You alone?

No, no, my husband—I mean, my guy, my whoever—he’s around. He turns out to be soft-spoken, with a dark beard.

There you are. I like dancing for couples. In the booth, before I can seat them beside each other, she faces him and hikes up her skirt. You can dance too. I bet you have some sexy moves. She starts taking off her top and I pull it back down and I tell her that’s only allowed upstairs. There’s more to the club. We have champagne rooms.

He signs the receipt, the bottle pops: one hour. She starts grabbing for my body immediately. I take her hands in mine and put them in his. Her thighs are clammy; I cover them with my hair. We’ll warm you up. She is wearing a pair of tight thong underwear that smell like they’ve been walked around in all day. I arch onto my back. You’re an hourglass, I tell her.

At 30 minutes, he steps out to smoke.

How did you meet?

My husband—not my husband— whatever… she murmurs. I mean, he’s great. Her sandals loosen themselves from her feet and fall to the floor.

He comes back into the room. They sink into the couch, groping the air for me vaguely. Impetuous, she catches the interior elastic of my g-string and snaps it hard. Ouch!!! No!!!

She grins. Sorry, he says. You can touch each other.

She brushes his hand from her thigh, indifferent. No. Nobody touch me. She folds herself onto the throw pillows and falls asleep in an instant.

Be careful with those hurricane drinks, they’re stronger than they taste.

We’ve been out since noon. He wraps his index finger around her big toe. I separate my legs from hers and move to the arm of the couch. 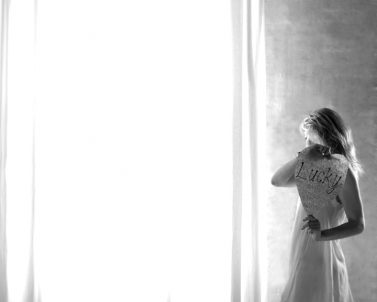 She’s in the medical field; patients love her, saves lives, all that.

I’ve been confused about something she said earlier. You’re married? He shakes his head. She wants to be. Soon. And you?

Her hair covers her face, I speak softly. Seems like you treat her right. You’re here because she wanted you to be.

He shrugs. We both did.

She stirs, moans and retches into the pillow. I put the bottle out and hold the ice bucket as she vomits. I sprint down the hall, grab a bar rag and slip back through the sliding door without management seeing me.

I wipe down the couch and hand him the rag. I’ll go upstairs. You can get cleaned up here. You have 20 minutes left. You have the room all to yourselves.