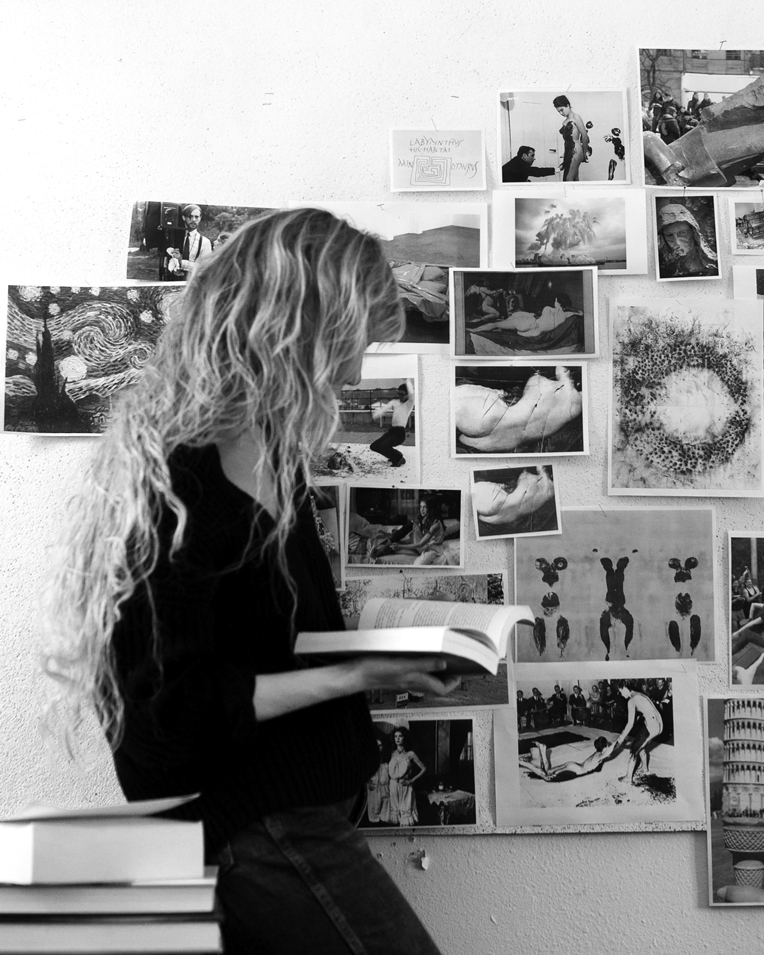 A WORK OF ART

Should we go back in now? I watch him stare out over Bourbon. If it’s… very important to you. He grinds out his cigarette butt against the heel of his dress shoe and tucks the pack into his breast pocket; half size “beedies” with an explicit, black-edged warning label across the front: a picture of a man with a chain around his heel, but instead of a ball, a man-size cigarette.

It’s been said you can’t sell something that you wouldn’t yourself buy, that the seller must believe in the value of what they sell or no one else will. Yet every weekend, within the price range of a used car lot, I sell empty rooms to strangers, filling them up with words. We’d spent the first hour talking about art, and return to the subject now.

He tells me that he grew up in China, and has come to New Orleans for “meetings.” To me you are a work of art, he says, placing his hands on my hips. Thank you. What’s your favorite work of art? He labors to think. Painting. I laugh. I mean, your favorite piece of art. Like a certain sculpture or a painting.

In my head I scan through the hazy endnotes of my college papers, having studied art history a decade ago. From my sophomore year onward, I’d worked every Thursday and Friday night and every Sunday afternoon in a tiny club that shared a wall with an auto upholstery shop. I’d danced under the name “Absinthe” alongside girls who’d called themselves Anaïs, Colette, June. The bluestocking teen, stripping her way through school, en route to la vie bohème: we worked the trope until we wore it thin.

The prerequisite to any philosophy class was formal logic, hours of dry-erase markers squeaking out cascades of unintelligible glyphs, so I’d never taken any of his classes: my colleagues pointed their professor out to me. He occupied the stage’s left corner, propping his sneakers up on the tip rail beside his empty pint. What department are you in? He leaned towards me. Every time you guess wrong, you give me a dollar. If you guess right I’ll take my top off. He smirked: If? Starting with the hard sciences, he worked his way through the soft ones, then into the humanities. I giggled, flashing my teeth. Give up? The syllable fogged the nonexistent glass between us. Art. Makes sense. I recalled my father telling me that sending a child to a liberal arts college was like driving a Mercedes off a cliff every year for four years. I was in school for five.

The week I began stripping, after an end-all fight with a boyfriend, I’d been crashing with an acquaintance. She’d confessed to me she wanted to audition at a strip club, but wanted someone to come with her. We bought shiny faux patent-leather Pleasers and practiced walking around on the carpet, shimmying into the mirror. The day of the audition, though, she’d had a change of heart. I went in alone and was hired the week classes started. She’d had a boy staying with us, first on the the sofa, then her bed. The academic year underway, he’d changed course, pursuing me. She and I had fought about it and never reconciled. For the following school year and into the summer, he’d urged me to quit stripping, resenting the secondhand smoke in my hair, interrogating me on the contents of the lost hours between 2 a.m. last call and 4 a.m., when I’d pour myself into his bed. I said it’s my job. He said school is his job. We fought constantly, escalating into physicality when he pulled his iPod out of his pocket, overhand pitching it at my head, breaking my bedroom window. Weeks later, he approached me in the library, looking over my shoulder into my book. What is that, finger painting? I stared into the massive hardcover. Abstract Expressionism in Japan. Rather than gesturing victoriously with paint—as did the postwar Americans—artists in Japan jumped through walls of paper, threw the whole paint can.

Facing him on his lap, I tell the man that my favorite class is Contemporary Art in China. I recite the slides I remember. A man paints his body to match the wall he stands against, lettered with a huge red “no” (不) symbol. A man meditates in the center of a ring of dynamite charges and records his unwavering heartbeat as they detonate. A man saves all of his mother’s empty packaging which she’d hoarded over decades, sorts and arranges it in typological arrondissements on the gallery floor. None of these works of art seem to move the man. I change lanes.

What did you like best about growing up in China? I play with the lanyard around his neck, his conference laminate clipped to it. I grew up in the country. I was a trouble boy. I ask him how. We left school, played in the fields, stole apples. Fighting, too. Pride glints on his face. What was the best fight you ever got into? He touches his forehead. I got hit in the head, with a rock. I touch the same spot on his forehead. Ouch. What about the other boy? Melancholy emerges, the aftermath of a weekend of clients and late-night liquor crawls. I hit him, too. I rub his temples, the rest of me still. I feel him start to fall asleep. A limb at a time, I release myself as he melds into the sofa.

Contemporary Art in China had filled a graduation requirement; my favorite class was unconstrained by time or place. Protesters knocking the noses off dignitaries’ marble busts. Zealots burning books in a pile. Lewd graffiti scratched into urns. Gargoyles’ scowls corroded by caustic urban rains. Wall drawings on newly opened caves, dissolved by the humidity of modern man’s breath. Hundreds of analogous snapshots: a tourist with their hand out, civilization’s great towers foreshortened into paperweights. Paintings: slashed in museums, mildewed in attics, buried in rubble, stolen in the night. Bronzes of women in public squares, their hands, lips, and breasts rubbed bright by the touches of passersby. Art History 310: Iconoclasm. The entire semester was devoted to whether, and how, destroying art was an art itself. Art was not discrete objects, authored by history’s various boy’s clubs, catalogued into “movements.” It could be any act, deliberate or not, the marks if left, visible or not, done by anyone, named or not, at any time, known or not. Through violence, art made itself alive.

The bluestocking teen, stripping her way through school, en route to la vie bohème: we worked the trope until we wore it thin.

I’d written the final for Iconoclasm on the portraits of Storyville prostitutes, 89 glass plate negatives from the 1910s, found inside a sofa. The plates were sold at auction to street photographer Lee Friedlander, who reprinted them all full frame, including damage to the plates’ perimeters. A woman in striped stockings, raising a glass. A woman sunning herself on an ironing board. A woman in an open window, a brass bed frame in the dark behind. Many of the women’s faces had been scratched out. In popular culture, the images had proliferated—usually terribly—into books, films, performances, photographs, paintings. I inventoried these transmutations, thumbing through Pretty Baby while sunning myself on my roof, moving on to Louis Malle’s film version, then onto documentaries on famous red light districts: sex workers, musing on how one can supposedly “sell their body” and yet, somehow, still have it at the close of the day. I’d had to ask for an extension: I wanted the paper to be exhaustive.

The champagne room door slides open—the waitress, unannounced, perforating our tableaux vivant, reflected in the glass. A woman reclines beside a man dissolving into a sofa. You have—I shh her—he’s asleep—she retreats into a whisper—ten minutes left.

I drift. I am walking through a museum with my father. Yves Klein occupies the entire top floor, the man who’d claimed to have invented a color. His models, dipped in his antediluvian blue, pressed their bodies onto vast swathes of paper. I don’t ‘get’ contemporary art, he says as we pass a red convertible, smashed flat, mounted on the wall. Art should be sculpture… painting. The crowd outside the museum, awash in noon light. Crossing the square, his eyes follow the trajectory of a girl in a sundress. So quintessentially French. That outfit. See, that’s how a woman should dress. I snapped back that a woman should be however she’d like to. Can’t a man look at nice things?

I touch the man’s forehead to wake him. Do you want to extend? He sighs. If it’s…very important to you.