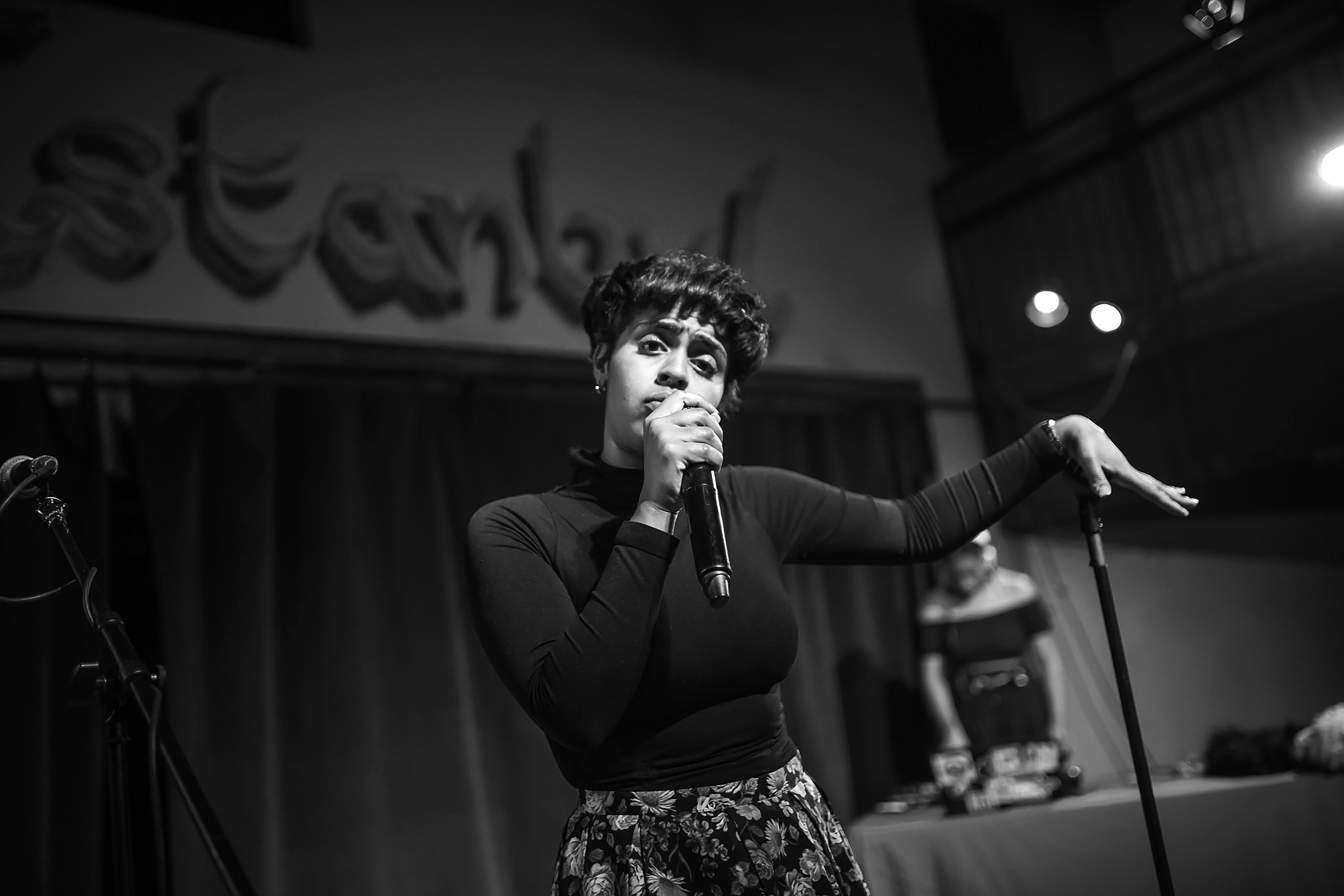 By RENARD BRIDGEWATER for MaCCNO January 2020

New Orleans native Jasmine “Demplz” Olivier wears many hats: rapper, singer-songwriter, sewer of Black Masking Indian suits, and mother. She grew up between the city’s 7th and 8th Ward neighborhoods, in addition to stints in both California and Dallas, before firmly re-planting her feet on Crescent City soil. Like several artists before her, Demplz gained recognition as a continuous presence at the Soundclash Beat Battle’s open mic segments. These truth-baring, slow groove performances eventually led to featured gigs of her own and participation in group cyphers at the NOLA Music Awards, among other opportunities. She released popular tracks like “Groove,” “La La La,” and the appropriately named “Teaser” EP, but unfortunately never released a larger body of work. Some time passed before Olivier re-emerged as R&B vocalist Jazz, showcasing her softer, artistic side with songs like the tonally-delivered, saxophone-laden single, “Handle Me.” A couple of performances preceded yet another self-imposed sabbatical from Olivier after this musical release.

The music industry is currently in a weird state of flux. As an independent artist, it’s never been easier to make your music accessible to listeners around the world; however, with so much music being created and released daily, consistent output and visibility is one of the few tried-and-true formulas. Despite her sustained popularity, strangely enough, the dual performer says she wanted people to forget about her and presented herself with a challenge: “Do it again, but this time be consistent.” Feeling the Jazz persona made her too vulnerable as an artist, Olivier (and her Gemini sensibilities) have taken the time to craft not only new music but also a more developed persona for her soulful vibes and singing career as Honey Lavender. When discussing what this new music may sound like, Olivier explains, “Honey Lavender allows me to have that softness, to still show that soft side.” Musically, in this day and age, there are no rules so future plans could include a Demplz track that “features” Honey Lavender on it.

I’ve always been interested by artists—especially my peers and colleagues—who maintain the dichotomy of being both a working creative and parent. Clearly, there’s no science to it and everyone’s situation is different, but maintaining active support systems that provide both financial and emotional assistance are necessary to a musician’s livelihood. To some family members and supporters, pursuing a music career can be seen as a fleeting hobby; something that we did while younger, that will inevitably extinguish with time as our priorities and lives change. Just about every artist either remembers or can relate to that pivotal “come to Jesus” moment in Sister Act 2 when Sheryl Lee Ralph’s character, Florence Watson, adamantly tells her daughter, Rita (played by real-life Grammy Award-winning rapper-singer Ms. Lauryn Hill), “Singing does not put food on the table. Singing does not pay the bills. Singing is no guarantee to a future even if you do have talent.” This scene sounds vaguely familiar to the “intervention” several family members had with Olivier—a mother of three—where they thought she was prioritizing music over her children. She’s quick to admit her dedication to parenting and disagreement with the previous account by stating, “I’m a lion when it comes to my kids. I’m the only one hunting. I’m the only one gathering, the only one doing all that.” Her persistence in both arenas converged when Olivier’s children got the chance to see her perform. “I’ve never seen them look at me like that… my son looked at me like he looks at Spider-Man. My daughter looked at me like the princesses that she adores,” Olivier proudly recalls.

At the age of 7, Olivier learned how to sew the intricate beadwork and designs that have made the suits of Black Masking Indians a valued and highly respected New Orleans cultural artform from her grandfather, Big Chief Alfred Doucette of the Flaming Arrow Warriors tribe. She’s worked on almost all of the two-time Mardi Gras Indian Hall of Fame inductee’s suits that he’s created in her lifetime. From her perspective, “Sewing is a lot of discipline… It’s good for a gathering of the minds. It’s just one big cypher and anything can come from a cypher from sewing; a song can come, life lessons can come,” says Olivier. Of Doucette’s numerous suits, her favorite is his “Marie Laveau” themed suit. She first learned of the widely revered Voodoo practitioner and fellow New Orleanian in the 3rd grade during a conversation with her “Paw Paw,” which eventually led to her singing background on a song aptly titled “Marie Laveau” off Doucette’s 2007 LP, Rollin’ With Da Legends & Marie Laveau.

The popularity of Black Masking Indians continues to increase as various press outlets highlight the sewing prowess and creativity of these New Orleans’ cultural practitioners. In late November, a NYU Costume Studies grad student and self-described “Fashion + Costume Historian” posted a thread on Twitter discussing the origins of Black Masking Indians, waxing poetic about their suits, and dedicating an entire post to Big Chief Doucette’s Marie Laveau suit. Olivier responded with some additional context: “All of the suits are handmade, like this one, created with my grandfather’s hands… My hands… My sisters’…” With social media, it takes mere seconds to grab a screenshot of some art you appreciate and post it among your networks. In addition, it’s an equally effortless task to cite that artist or in this case, the culture bearer behind it. “Name that person… Do your research before you put things out! Then they try to put the history out without knowing it. I would respect a person just asking,” says Olivier.

Looking to the future, despite her background and history within the culture, Olivier has never officially masked during Mardi Gras, although it’s something she’s thought about. “One year I see me doing it. I see me incorporating it, making my own costume for a video showing our culture off somehow,” she states. Other ideas include curating an exhibition of her sewing and pieces of patchwork that would also be for sale. These types of ideas come at a steeper price though, morally speaking. New Orleans culture has been largely extractive not only from our tourism industry but also as more and more photographers find themselves traveling to our city to document Black Masking Indians without compensation or citing them appropriately. When putting this into context with her ideas of ways to celebrate her culture, she deliberately asks, “Do they deserve to have this culture hanging in they house? Do they deserve to have my hard work, my hand work, beading and everything that goes into it… Do they deserve to have that in their houses? No they don’t.”

In the birthplace of jazz and arguably American music, there have been many musical talents from our city that have felt compelled to leave for further opportunities in other places like L.A., New York, Chicago, Austin, Atlanta, etc. It’s been said by many musicians and artists over the years that the city itself provides inspiration to those who need it. With 2020 underway, this dual threat looks to “make a decent splash” with new music on the horizon from her Honey Lavender persona and to do it right here in New Orleans. With a new year and decade upon us, she views this moment as “a rebirth” for her career and creative output: “I’m from here and I can still see the beauty and the power in my own city… I am constantly and consistently every day, finding another reason to fall in love with New Orleans [and] our culture. Another reason to stay. Another reason to create. Another reason to be here.”