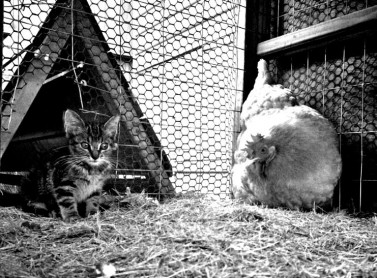 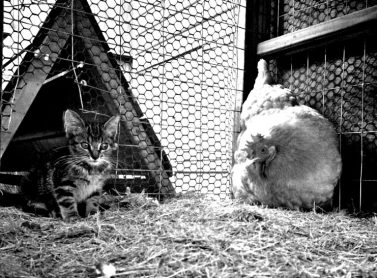 They waddle. They don’t necessarily like you. They produce large quantities of excrement. For many of us, chickens are just funny-looking creatures who peck, make strange noises and are rather dirty. Other than the bird whisperers out there, most of us just don’t get them. So why have chickens? A few local poultry parents schooled me on the benefits (and challenges) of having one’s own backyard chicken coop in the city.

When asked why he started his own coop, Matt Toups (of Slow Danger Brass Band) says “I choose to keep chickens because I like my home’s backyard to be a living, useful place as well as a relaxing, fun one… Nature works in cycles and my chickens make that very evident. They don’t just eat and make eggs. They control bugs; they keep my grass down and their excrement fertilizes the trees. They solve so many problems at once.” Ariel Wallick, of the New Orleans Family Learning Cooperative (and former New Orleans Food and Farm Network employee) says that legally, a person can only keep 4 hens in a backyard coop. Toups, along with his roommate, has three hens.

Keeping a chicken coop is far more rewarding than having eggs for breakfast, which is a plus for those of us who eat eggs. Toups comments that “eggs from the backyard are noticeably fresher.” Chickens are natural gardeners and fertilizers in one. They scratch the ground for their food, constantly turning up fresh soil and their feces are incredibly nutritious for plants and trees. Toups’ neighbors even regularly ask him for droppings: “The droppings usually dry up and harden quickly, making them pretty easy to manage. Another local chicken coop keeper, Adem Vant Hull, has four hens and has kept chickens for several years. He says that what you choose to do with the poop is the “dealer’s choice.” Vant Hull puts his chicken’s poop on plants.

One common challenge that chicken keepers encounter is a pecking order when bird varieties are mixed. Toups faced fighting chickens when his roommate moved in, bringing his own chickens with him. The two groups of chickens did not mix well, resulting in aggressive pecking. Usually, in these situations there is an “alpha” hen pecking the others, sometimes removing most of another hen’s feathers. 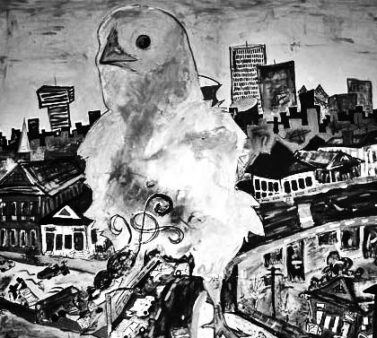 Aside from inner aggressors, keeping an urban coop means ensuring that you secure it against escape and also make it safe from prowlers (like cats, dogs or possums). But sometimes, historical prowlers (like cats) end up making an unexpected friendship with urban chickens. Toups discovered a baby kitten in his coop one morning and the kitten triggered one of his hen’s mothering instinct, making her “broody” as she would be over an infertile egg. Toups’ hens are still friendly with the kitten, who is now close to a year old. Also important to a coop is having a run, or secure yard where the hens can scratch and roam. Vant Hall comments, “Chickens want be in the coop at night and do not want be in the coop during the day. Whatever chicken you get is going to be a lucky chicken, considering the mass of notso- lucky chickens out there (shout out Popeyes 3-piece spicy). It will be happy and ignore you and you’ll feed it and eat it or the eggs, get to enjoy them. Everybody wins.”

The whole idea of sustainability is evident in the experiences of these local chicken keepers. Chickens will roam in the area you provide for them, which may include your whole yard, eating grass and leaves. Toups says that he has a banana plant in his yard that produces a large amount of leaves his chickens eat. In 2010, yard waste (including leaves, grass and plant trimmings) made up almost 25% of landfill substance. Toups requests, “Please stop dumping huge quantities of grass and other yard clippings in landfills… If you choose not to compost your yard stuff then think about giving it to someone with chickens.

Some things to remember if you are considering starting a coop, courtesy of Ariel Wallick:

Coop and Run: Make sure you have the space for a secure coop as well as for a run.

Keep It Clean: Keep the coop clean. This will help diminish rodent visitors and bacteria.

Feed: If you have baby chicks and adult chicks, make sure you are giving the baby chicks the correct feed— they need to get more calcium and fat than adult hens. Also, there is a difference between the quality of organic and inorganic feed. Get the organic feed.

Heavy Metal In Our Ears, Not Our Eggs: Chickens are bioaccumulators, which means that if they eat something with heavy metal (some dirt has heavy metal), it will pass through to the eggs which, in turn, means you should not eat those eggs. Get your soil tested.

It is your responsibility to provide your chickens with a safe and clean environment. Predators will always sneak around the coop’s perimeter and if left vulnerable in any way, the chickens will unquestionably undergo attack. After Toups participated in this interview, a raccoon attacked one of his hens, leaving her severely wounded. Due to her lack of improvement, Toups decided to put her down himself. He said of the experience, “It was a horrifying task but I think it was the right thing to do and I’m glad I could be there to do it with care and compassion.” For some, it is surprisingly easy to grow attached to the birds; for Toups, he found that his chickens have “distinct personalities,” causing him to develop affection for them as he would a dog or a cat. Chickens can be much more than utility or this idea of supporting the environment. For many, chickens become part of the family.

Your own chicken coop will allow you to care for a non-traditional pet that is relatively easy to care for after initial setup (coop and run). As Vant Hall says, “They will pretty much make themselves happy in almost any situation.” Autonomous gardeners who provide breakfast for egg-eaters? Can’t get much better than that.