The French Quarter is, in some form or another, about 300 years old. It’s weathered fires, plagues, wars, and hurricanes. It has seen preservation and planning successes and preservation and planning disasters. Like all urban spaces, it is not static, but rather subject to constantly changing social, political, technological, and environmental shifts. Its age and prominence makes it a frequent target of “big ideas”—some, like the infamous Riverfront Expressway, doomed to fail. Others, like the transformation of Bourbon Street into a world famous tourism hub, have profoundly impacted the neighborhood. The latest big idea, a proposal championed by Mayor Cantrell to pedestrianize the French Quarter—greatly limiting cars while turning a number of prominent streets into pedestrian malls, outdoor dining areas, and small parks—was announced at the end of May. Will it be profoundly transformational or a historical footnote? That remains to be seen, but either way, input from the cultural community will be crucial since—as usual—thus far the City has neglected to engage working musicians, street performers, and service industry workers, all of whom could see their activities impacted if any of these changes become a reality. 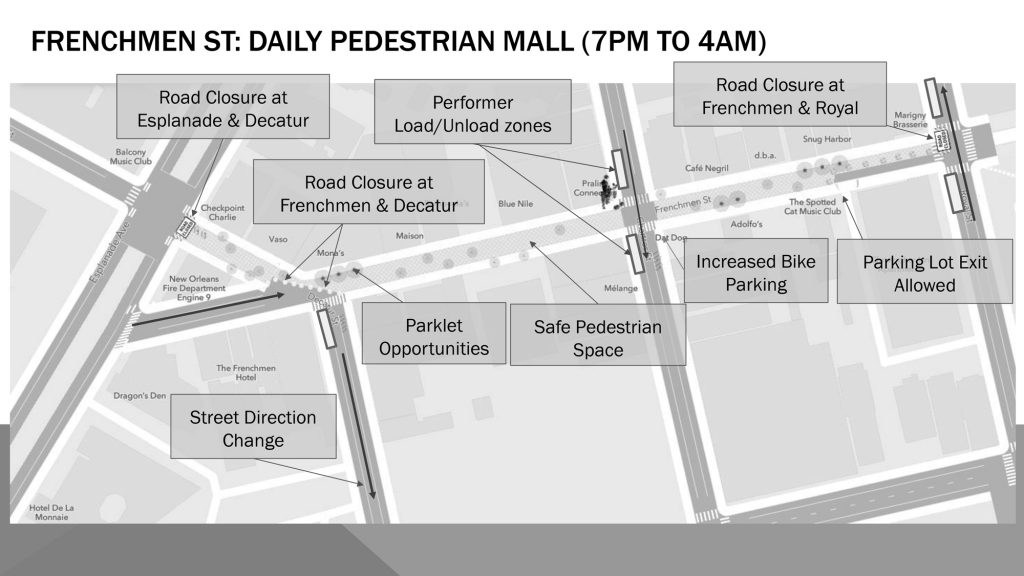 Of course, the problem is many people haven’t even seen the full plans yet, let alone provided input. While Mayor Cantrell has noted that these proposals would provide more space for street performers, to our knowledge, no performers have been consulted. In fact, while the plan repeatedly highlights opportunities for dining, music is ignored almost entirely—a particular problem when it looks like indoor live music will be prohibited for the foreseeable future. For years, we have been fighting to simply keep the Royal Street Pedestrian Mall accessible for some of New Orleans most well-known performers—imagine if the city worked with the performers to create attractive, functional busking pitches, just like they are working to create spaces for outside dining! A quick scan of New Orleans tourism literature shows a clear embrace of street musicians, who are both shown and mentioned as one of the reasons to visit the French Quarter. They’re a significant part of the marketing of the city as a destination, and it’s not a stretch to say their presence brings millions of dollars to the city every year. But when there is finally an opportunity to support them? A prominent place in an announcement, but barely an afterthought in implementation. Street performers need access and opportunity, not just lip service. We can use this plan as an avenue to make sure their needs are addressed.

Similarly, the needs of gigging musicians and service industry workers need to be included before these plans advance any further. In particular, musicians need to be consulted regarding any changes that would impact Bourbon or Frenchmen Streets. Limiting traffic to French Quarter residents only, for example, would likely create significant challenges to musicians getting to a gig on Bourbon Street; and currently these plans offer no accommodations for loading or parking. A park and ride system has been suggested for service industry workers, but this is not an attractive alternative for musicians and performers with bulky gear. The potential pedestrianization of Frenchmen Street presents another set of challenges. If the street is fully pedestrianized every night—which would further incentivize patrons to bar-hop or congregate outside—how would this affect venues with a cover charge? Could it lead to an even further shift away from a focus on live music towards alcohol sales—and a corresponding lack of compensation for musicians? You can’t determine that with traffic counts and pedestrian flow charts—you need to talk to the musicians, venue owners, and employees who really understand how the street works.

The wide variety of concepts and political realities of New Orleans suggest that it is unlikely that the majority of the French Quarter Pedestrian Plan will be implemented. But it does contain some ideas that could provide significant benefit with few drawbacks. A re-imagining of parts of the French Market to reduce traffic, increase outside dining, and create more opportunities for busking could help re-invigorate a struggling area. Expanding the crowded sidewalks on Decatur Street, too, seems both useful and not particularly controversial. Frenchmen Street could certainly use a bit of a facelift, rebuilding sidewalks and removing obstructions that make it difficult to navigate on busy nights. It’s also worth exploring how a more radical transformation could help or hurt the neighborhood and business districts. However, nothing should move forward until the city commits to working with the cultural community members, small business owners, and service industry workers who play an instrumental role in making the French Quarter and Frenchmen Street the icons that they are. We should have had a seat at the table from the beginning, and we need to demand one now. E-mail the City Council District C Office at Kristin.Palmer@nola.gov or Barbara Lacen-Keller, Constituent Outreach Manager of the Department of Cultural Economy at blacenkeller@nola.gov and let them know we have a stake in this too.