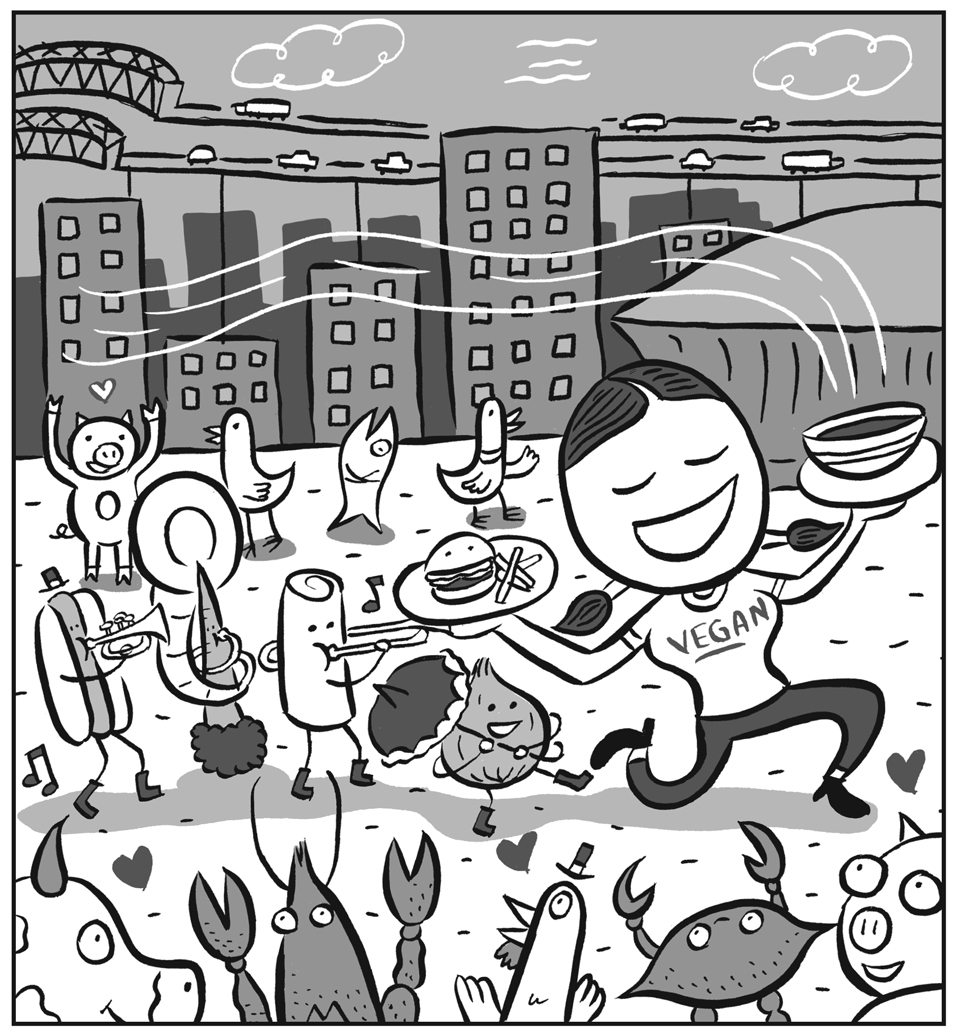 Fun fact about me: I was vegan for a long time, and I still love meatless meals, even though I’m currently omnivorous. I mean, fruits and vegetables are tasty, y’all. But being vegan in New Orleans in the late ‘90s/early 2000s was NOT FUN. There were exactly two places you could go out to eat; it was so alienating. I’m pleased to report that it’s gotten a lot better, and a whole slew of new restaurants have cropped up with vegetarian and vegan options. In fact, there’s so many new options, this is just part one of a multi-part veg head investigation! This month, I’m eating strictly vegan; let’s see how it goes.

The Daily Beet (1000 Girod St.)
The Daily Beet is one of those CBD spots that caters to the young professional crowd. It’s teensy but bright, modern in that white walls, succulents, and pendant lights way. Naturally, their menu features items that are instagrammable—the sort of food that boomers complain about millenials loving, like avocado toast, quinoa, and açai. I find that sort of old-folks food snobbery annoying and uncalled for. I mean, my grandma has been eating avocado on toast for nine decades—it’s nothing new. But, the fact remains, The Daily Beet is projecting a very specific sort of vibe that is either going to appeal to you on a deep spiritual level, or make you want to run the other way screaming. Anyway, let’s discuss the aforementioned avocado toast; it’s toast with smushed up avocados, cherry tomatoes, salt, red pepper flakes, and olive oil. I love avocados, so this was probably always going be a thumbs up from me no matter what. I also tried the Mexicali Blues salad and the Southwest bowl, which tasted remarkably similar, maybe because I’m bad at reading menus and placing orders? The Mexicali Blues salad consists of spring mix, avocado, black beans, corn, tomato, red onion, cilantro, tortilla chips, and a jalapeño lime vinaigrette (it usually also comes with cotija cheese but for my purposes here, I asked for it vegan). It’s good! It’s like a semi-upscale taco salad. The Southwest bowl is quinoa, avocado, black beans, corn, pickled onions, cherry tomatoes, and pumpkin seeds (it usually comes with queso fresco, but again, I requested that it be left off for this review). It basically tasted the same as the Mexicali Blues salad, but on top of quinoa, instead of spring mix. The Skinny Green Smoothie made with rice milk was perfectly adequate, although I think I wish it had been made with some type of juice instead? 7/10 Succulents

Sweet Soulfood (1016 N. Broad St.)
Sweet Soulfood is a brand new all-vegan restaurant in the Seventh Ward; it’s cute, cozy, and unpretentious. Look, we’ll discuss the rest of the menu in a minute, but I need to get this off my chest right off the bat: Sweet Soulfood has the best cornbread I’ve ever had in my life. This isn’t hyperbole. It’s sweet, moist, and coconutty; I’m assuming they use coconut milk? Coconut oil? I don’t know but it’s so tasty. Cornbread has a propensity towards dryness that I find off-putting, so I’m completely flabbergasted as to how this cornbread is both vegan and better than regular cornbread. How does this work? Sweet Soulfood is set up cafeteria style; you pick two, three, or four options for a set price. Because of this set up, I ended up trying a lot of different things: I got the mock seafood boil, mac’n’cheese, sweet potatoes, mushrooms and grits, greens, jerk cauliflower, and loaded potatoes. The mac’n’cheese was legit excellent, and y’all know I’m fussy about these things. The cheese sauce tasted genuinely, and unexpectedly, well, cheesy. The other dishes leaned more towards average: the mock seafood boil is the stuff you’d get in a crawfish boil (potatoes, corn on the cob, mushrooms) sans crawfish, and that’s exactly what it tasted like. It was fine. The mushrooms and grits were, well, mushrooms on top of grits in a non-boney bordelaise sauce. The jerk cauliflower tasted like cauliflower in barbecue sauce, which was kind of odd, but not awful. The sweet potatoes, loaded potatoes, and greens were all serviceable and filling. My biggest complaint about Sweet Soulfood is that there was a noticeable lack of protein options. Or maybe that’s just me approaching this restaurant as a meat eater? I’m not a nutritionist or a dietician, so maybe there’s enough protein in the veggies to suffice, but it seemed odd that there were no beans, soy proteins, etc. on offer, on any of my trips. I’ve heard they have chickpea fritters on occasion, but I was never able to catch them. I need to go back anyway, though, because they have coconut-based ice creams, which I’m hyped to try. Word on the street is that they sometimes run out of food before closing, so consider yourselves warned and get there early! 8/10 Non-Boney Bordelaise Sauces

Sneaky Pickle (4017 St. Claude Ave.)
Sneaky Pickle is a rather unassuming little spot on St. Claude, a couple blocks up from Poland. I’d been meaning to go there forever when a coworker suggested we pop by for lunch one day when we were working on a project in Holy Cross. And I’m so glad she did! A reuben is my favorite type of sandwich, so I was thrilled to see a tempeh reuben on the menu! The tempeh works nicely as a reuben filling, the vegan Thousand Island was tangy and tasty, and the bread was thick and chewy. Overall I really enjoyed it, but my favorite veggie reuben in the city is still the beet reuben at Siberia. As a tempeh superfan, I had to also order the smoked tempeh flatbread, a nice chewy roti-like bread with a vegan aioli and a kale and onion slaw. The slaw had a nice vinegary bite to it that worked nicely with the creaminess of the aioli. I had heard that Sneaky Pickle makes excellent fries, and the rumors were true, because these fries were good. I love a skin-on fry, and these were perfectly salted and just a little crispy. My surprise favorite dish was the vegan mac’n’cheese, although I’d argue that it’s more of a creamy vegetable pasta dish than a mac’n’cheese, proper. The “cheese” is a nutty squash sauce, and the dish is packed with peas, mushrooms, and tomatoes, and topped with a cashew crumble. I loved it and want to try to make it at home! The Buffalo tofu salad was also quite pleasant; who would have thought of a fried tofu, cauliflower, and tomato salad? The biggest downside at Sneaky Pickle is that this place is slow; don’t come here on your lunch break at work, unless your job is a lot more lenient than mine. I waited almost an hour to get my food on a totally unbusy weekday visit, and over an hour on a relatively chill Saturday. Maybe they need more staff? The food was really good though! 9/10 Relatively Chill Saturdays