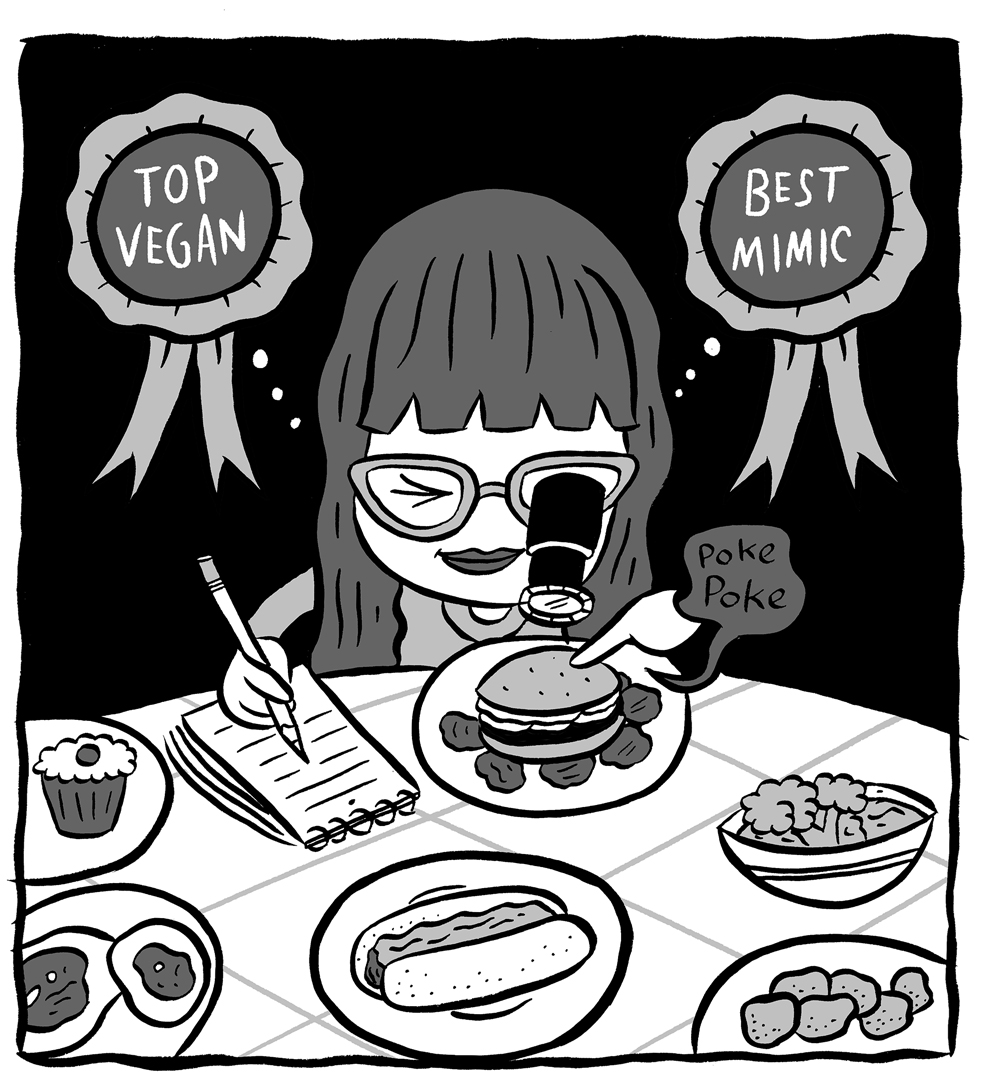 Welcome to part two of my (almost) all vegan investigation! Last month, I ate vegan fare at three different spots around town (The Daily Beet, Sweet Soulfood, Sneaky Pickle). This month, I hit up three more. I’m currently an omnivore, but I love vegetarian food, and I’m having the best time trying out a bunch of places I’ve never been before!

Trilly Cheesesteaks (4413 Banks St.)
Trilly Cheesesteaks is located in the little building in the back of the Banks Street Bar where Clesi’s used to be, and Mid City Pizza before that. They have an interesting menu: half of it is vegan and half isn’t. I’ve never had a real Philly cheesesteak—I spent several months in Philadelphia post-Katrina, but it was back when I was an actual vegan, so I missed out on trying one. So for the purposes of having a baseline comparison, I ate both a vegan cheesesteak and a non-vegan one (which is why this is an almost all vegan investigation). The non-vegan version was excellent: the steak was well seasoned and sauteed, the peppers and onions were a nice compliment, and it wasn’t overly cheesy and wet, which I was worried about. The vegan cheesesteak didn’t really taste like the non-vegan one, but it was still a very solid sandwich and one I enjoyed on its own merits. The “steak” is a very nice quality seitan that reminds me a lot of Wheat Roast; it has the same texture and slight peanutty flavor. It may be sauteed and seasoned Wheat Roast, but I’m not positive. I’m not sure what’s in the cheese sauce, but it had a very pleasing mouthfeel, and good flavor overall. The peppers and onions again worked well with the sandwich, and the whole thing held up really nicely overnight in the refrigerator for lunch leftovers the next day. I went back a few days later and got the vegan bbq chicken sandwich, which is a very similar sandwich but made with a lighter-colored seitan and a very sweet and pleasant bbq sauce. Oh, and the fried pickles are legit. I will be back for sure! 10/10 Wheat Roasts

Bearcat Cafe (2521 Jena St.)
Bearcat is right off Freret Street on Jena, in a very new building that is vaguely out of place and scale with the rest of the neighborhood, although not as out of place as the faux Quonset hut next door. It feels very much like you’ve been plopped down into a hip stripmall in Southern California, which I think is what they’re going for? Anyway, on to the food! For a starter, I ordered the cauliflower small plate: cauliflower, pesto, pine nuts, and lemon. The pesto tasted much more like the cilantro chutney you’d get at an Indian buffet than a traditional pesto. I think the cauliflower was pan fried but I’m not completely sure. It wasn’t a bad dish, but it also wasn’t necessarily good. For my main dish, I got the vegan ranchero: two sweet potato tortillas, black beans, salsa, and a couple slices of avocado, topped with a cashew crema. I thought it was OK, if a bit overly salty. Also, I expect vaguely Mexican/Central American food to have a little bit of heat, but this dish was as mild as it can possibly get. In order to get any kind of flavor out of it, I had to drown it in Crystal. My dining companion ordered the portobello Philly sandwich, which was mushrooms, bell peppers, onions, and a “sweet potato wiz” which is the faux cheese sauce for this one. Much like the other two dishes, it was completely unseasoned except for salt. I thought the food was all competent, and I can see who this would appeal to, but I don’t think it’s for me. (A note: I’ve been told by multiple sources that their non-vegan menu is way better than their vegan one, so I also tried the Cajun gravy biscuit, and it was heads above anything else I had there. But that’s a story for another day.) 5/10 Faux Quonset Huts

Seed (1330 Prytania St.)
Seed is in a really lovely early 20th century brick building that still manages to be bright and airy inside. Multi-light transom windows? Yes, please. This would make a very cute date spot. I went with several people, so we were able to try a lot of things on the menu. We ordered the southern fried nuggets starter: deep fried tofu nuggets battered in chickpea flour. I got them with the agave mustard sauce and they were so good. I know that’s a really basic description, but it’s exactly what I thought on my first bite. Like, damn: these are good. The texture on the tofu was nice and dense, and the chickpea batter was really light with just a hint of crispiness around the edges. Also, because I’m bad at interpreting menus (as I’ve learned), I ordered the southern style po-boy, which is just the southern fried nuggets served sandwich style on french bread. I liked them that way as well, which is really no surprise. The second starter we ordered, the vegetable ceviche, was less exciting. It sounded really promising: cauliflower, scallions, red onion, red peppers, avocado, and lime and lemon juice. But it was so incredibly boring. I think it needed salt or pepper or any kind of seasoning at all. The sweet corn polenta dish was really lovely, though: grilled polenta cakes served with corn, mushrooms, and wilted spinach. The texture on the polenta was firm with a bit of bite, and the sauteed mushrooms were well seasoned. On the flip side, one of my dining companions legit hated her taco salad. I tried it and the walnut taco crumbles were dry and flavorless and the crème fraiche tasted oddly like nothing. For fun, we also ordered chocolate mousse, a raw carrot cupcake, and a gluten-free chocolate chip cookie. The chocolate mousse was silky, rich, and delicious. I had forgotten how good tofu-based mousses can be! The chocolate chip cookie was very tasty. I’ve made chocolate chip cookies before using chickpea flour, and they had a really similar taste and consistency to this one. I wonder if they did the same? The raw carrot cupcake was excellent and strange! You get an ice cream scoop of what looks like raw batter topped with little twigs. What is going on here? The little twig topping turned out to be bright and gingery, and the scoop of batter legit tasted like a carrot cake. So fun! Overall, I really enjoyed Seed, even if the dishes we ordered were hit or miss. The highs more than made up for the lows. 9/10 Little Twigs

Girls Gone Vegan (girlsgonevegannola.com)
Girls Gone Vegan doesn’t have their own retail spot, but their website tells you where you can find their goodies around town (over 30 locations). I popped into Mid City Pizza to pick up some of their pastries to try:

Carrot Cake Raisin Bar
The bar was so dry, but the frosting on top was quite tasty.

Peanut Butter Chocolate Bar
Reminiscent of something you’d buy from an old school health food store (shout out to my dining companion for trying it and pointing out that it tastes exactly like a “Grab the Gold” snack bar—she’s right.)

Brownie
Y’all, I’m not kidding: this tastes exactly like a Little Debbie brownie, which is a good thing, because those are delicious.