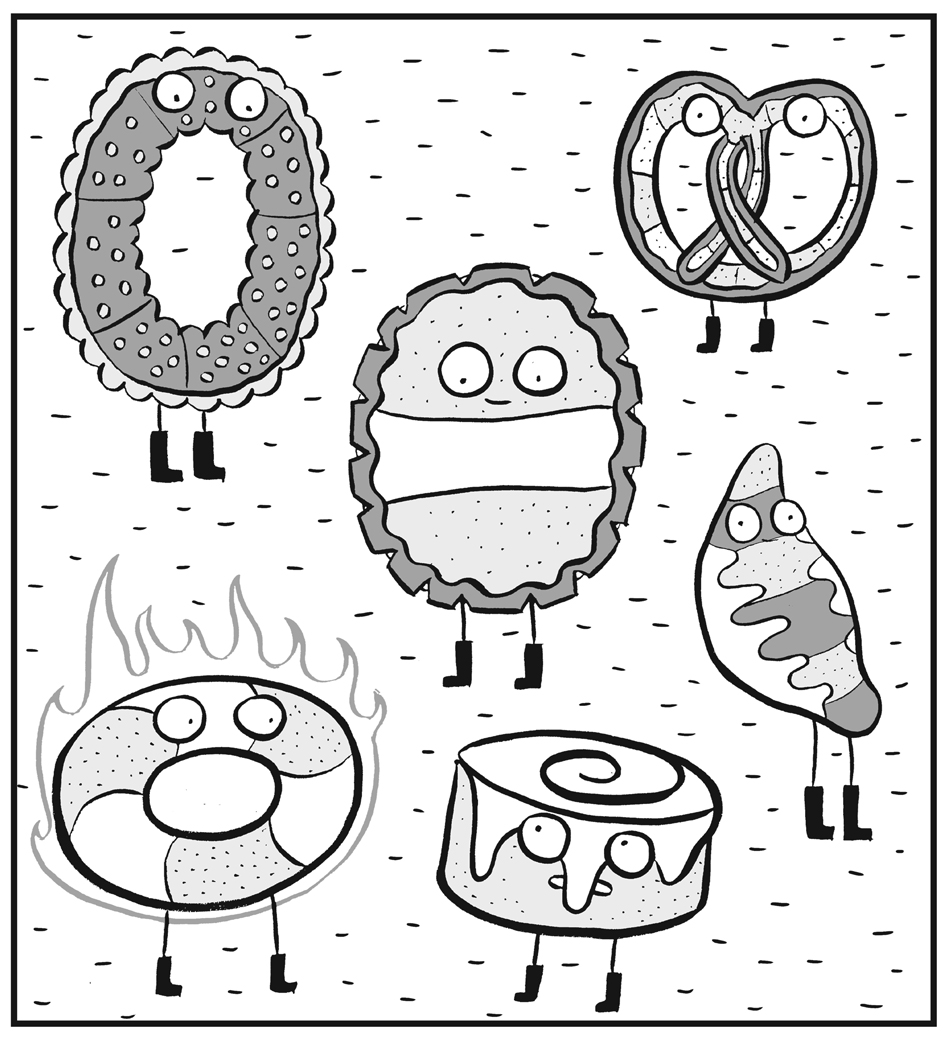 Hear ye, hear ye—it’s the most wonderful time of the year again and you know what that means: time for king cake reviews! This year I’m visiting some new spots but also looking at some old favorites who are offering up exciting new variations. I’m usually a king cake purist, but what the heck, right? Bring on the weirdos. No ratings this time around; I’m just here for a good time.

District (multiple locations)
This year, District debuted their new croissant king cake, which is a massive croissant ring filled with cream cheese, topped off with salted caramel, a drizzle of cream cheese, and pearl dragées (a fancy name for sugar balls)—oh là là. While there are some recipes (not for king cake) that call for either croissant pastry or brioche pastry, the two aren’t so closely related that it would necessarily make sense for a king cake to be made out of a croissant. And yet, it works. It really works. The pastry manages to stay separate from the cream cheese, rather than melting together like a lot of other filled cakes do. A coworker pointed out that it tasted exactly like a Cuban quesito—a little cream cheese and puff pastry pastelito—and y’all, I’m embarrassed that I didn’t make the connection. The whole time I was eating the croissant cake, I was thinking, “I know this flavor. Why is this so familiar?” If you love quesitos, or Latin American pastries in general, I think you’ll really appreciate this one. I want to nibble on a slice for breakfast, paired with a nice cafecito. Dreamy.

Dong Phuong (14207 Chef Menteur Hwy.)
Look, I’m not saying that I’m the reason that James Beard Award-winning bakery Dong Phuong has the hottest king cake around; but I ask you, who else was singing their praises way back when I pronounced them the king cake victor in my very first ANTIGRAVITY column in February of 2015? I kid, I kid. I have nothing to do with their phenomenal popularity, but Dong Phuong is still my ride-or-die. The cream cheese frosting is always light and airy and the brioche style pastry stays perfect. This year they introduced a new flavor: coconut! And y’all, let me be real, it tastes exactly like a Dong Phuong king cake that has coconut in it. I know that sounds like a stupidly obvious statement, but there you have it. I don’t know if I was expecting something totally different but, well, unless you’re a coconut superfan, you can probably skip it. Just keep eating the cream cheese one like you’ve been doing and invite me over when you do.

Sucré (multiple locations)
Sucre is known for having the prettiest king cake around: a perfect shimmery glittery confection, it’s like a glamorous Mardi Gras costume that you can eat! Gorgeous, but notoriously dry, it’s not necessarily the tastiest. Nonetheless, I was super hyped to try the new sugar and spice king cake. A king cake with Tabasco habanero sauce? OK! The cake is also filled with a whipped chocolate cream cheese and topped with a sanding sugar. At first bite, I thought, “Hmmm, this tastes like a bready king cake.” And then the heat hit me in a rather shocking wave. Fun! It was so spicy I could only eat half a slice, but I quite enjoyed it. You can buy it by the slice, so why not give it a shot?

Bratz Y’all (617 Piety St.)
I know that sweet pretzels are a thing that exists, but I’d never had one before I tried Bratz Y’all’s king cake pretzel. It’s a big pretzel—bigger than I was expecting—sliced in half and filled with a whipped lemon cream cheese. And you know what? I liked it. Pretzels, by their nature, have a snappy outer crust, which made this twist on king cake completely different than anything else I’ve ever tried. It’s kind of hard to cut (or maybe I just have crappy knives) but it’s worth it for both novelty and flavor. The crustiness of the pretzel juxtaposed with the lightness of the whipped lemon cream cheese was delightful. One caveat—this one does not hold up overnight; you must eat it immediately!

I’m usually a king cake purist, but what the heck, right? Bring on the weirdos.

Wishing Town (701 David Dr.)
I’d been meaning to check out this new Chinese Bakery for a while, but just hadn’t had a chance to head over. A friend sent me a photo of the Mardi Gras Wishing Cake, and I was immediately smitten with it! It’s a gorgeous chiffon cake with giant pearls of mango, blueberry, and pandan-flavored whipped cream (pandan is a plant that looks like a palm tree but tastes like vanilla), topped with sliced grapes, mango, and kiwi. Watch out, Sucré, because we have a new contender for beauty queen! It’s incredibly light and made me feel like I was a cartoon character. It’s just so cute! OK, obviously the Wishing Cake is not a king cake proper, but how could I resist? Wishing Tree does have actual king cakes, in easily the most exotic flavors out there: rose, pandan, durian, purple sweet potato, and mango, as well as some less exotic (but still intriguing) options like hazelnut and banana. You can choose any four flavors, so I did! I got rose, pandan, durian, and mango. And for good measure, I also got a purple sweet potato mini king cake, which was kind of like a little bun. The pastry is of the not-sweet brioche variety, instead leaning towards a traditional tortell. The fillings are obviously where things get interesting: the rose tastes like delicious soap (I legit love rose-flavored desserts, but I know deep down that it tastes like I’m spraying face toner in my mouth), the pandan tasted like a really high quality vanilla, and the mango tasted like a sweet, fresh mango. Let’s talk about durian, a true food weirdo. Depending on who you are, it either smells like hot death or bizarrely appealing. I’m one of those freaks who likes the smell and loves the flavor. It’s like the best almond custard you’ve ever eaten. And it really works as a king cake filling. The purple sweet potato tasted exactly like sweet potato pie filling, so if you ever wondered what it would be like to shove that inside a king cake, now’s your chance to find out! In related news, the savory lunch specials were delicious. It might be tucked out of the way, but Wishing Time is gonna be my new hang. I loved it.

Cinnabon (the closest one is actually in Lafayette!)
I was discussing king cakes with a friend who lives on the East Coast. She’d never had one but assumed they tasted like giant Cinnabon cinnamon rolls, which, oddly enough, is something I’ve heard from other non-New Orleanians. When I told her that I’d never been to a Cinnabon, she was legit horrified, and overnighted me a box of cinnamon rolls (so of course I mailed her a Dong Phuong cream cheese filled king cake in return, in the interest of cultural exchange). As will surprise none of you who’ve experienced both Cinnabon and a king cake, they are nothing whatsoever alike. Cinnabon cinnamon rolls are incredibly dense; these things weigh way more than a slice of king cake would ever dare. The frosting is somewhat like a heavier version of the Dong Phuong cream cheese frosting, so there is that. I think that as far as cinnamon rolls go, Cinnabon is fine. But it’s no king cake, y’all.