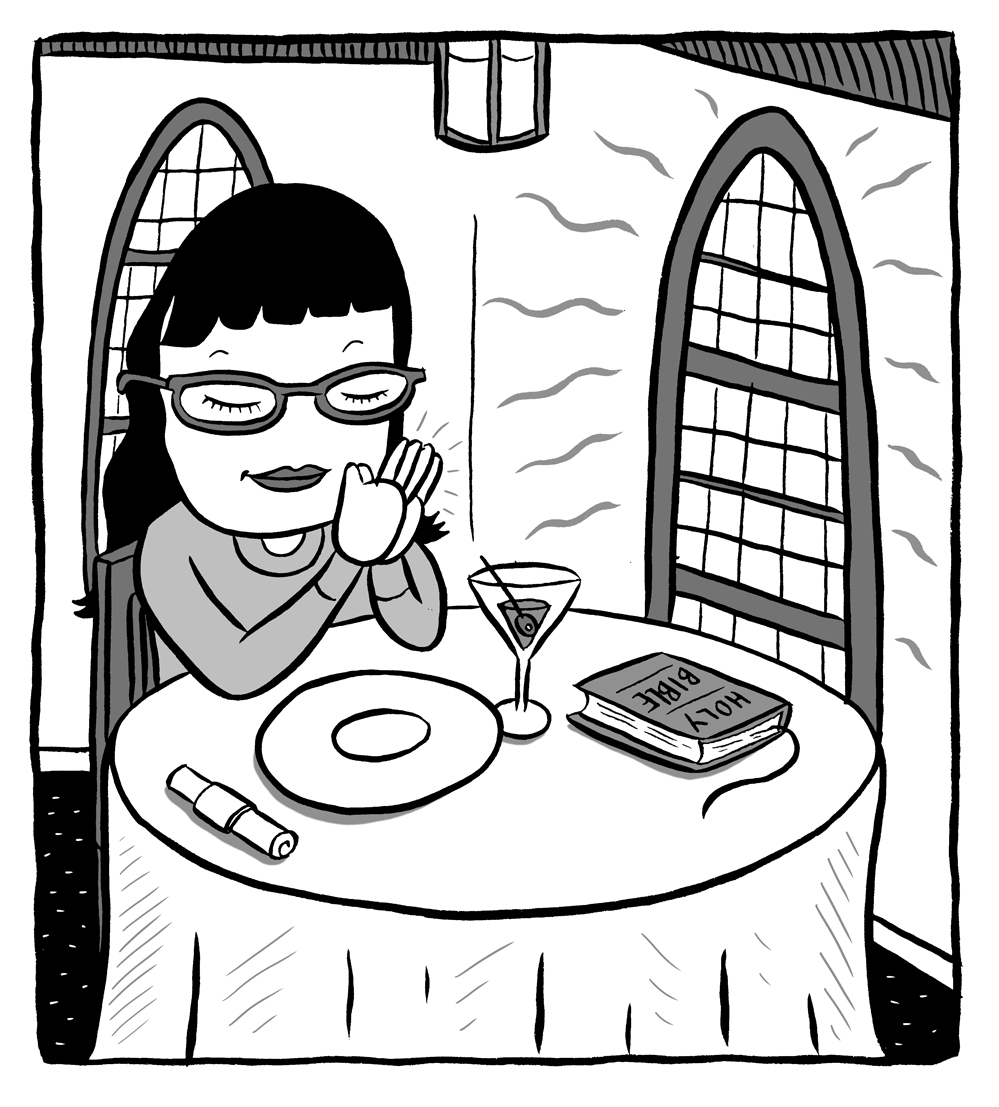 TAKE ME TO CHURCH

Like any good Catholic girl, my favorite season is Lent. I plan on getting my ashes at Immaculate Conception Church on Ash Wednesday, picking up my lucky bean at a St. Joseph’s Day altar (I think I should probably take the day off and try to hit up all of them), and feasting at every church fish fry I can find. But in case you’re not the pious little angel I am, you could also spend the Lenten season at former churches that are now housing restaurants and bars. If you don’t feel like going that far, there’s a wealth of other religious themed spots to haunt. I mean, if Beyoncé can live in a church, why can’t we just hang out in one?

Vessel (3835 Iberville St.)
Vessel is a legitimately gorgeous bar/restaurant inside a 105-year-old former Lutheran church. The interior has a soft, rosy glow because of all the multi-lite stained glass windows. There’s also warm old wood everywhere, exposed rafters in the ceiling, and gothic revival pendant lights. It’s intimate and beautiful. Before the space was Vessel, it was Christian’s Restaurant for roughly 40 years. I never ate there, but I have pored over old photos of the space from that time. Christian’s did an amazing job preserving the integrity of the church while making it a usable restaurant/bar space. And luckily, Vessel has continued that. I went with a couple friends so we were able to order an assortment of items: a cheese board, smoked Gulf fish dip, a chopped salad, a cheeseburger, mussels, and brussels sprouts. The cheese board was perfectly adequate but they were stingy with the bread, which is a personal pet peeve. The smoked Gulf fish was salty and not overly fishy, which is always a good thing with a dip. The chopped salad was disappointing; even though it had avocados in it, it didn’t really taste like much of anything. The winners of the night were the mussels and the brussels sprouts. The mussels were not at all what I expected; it was listed as a small plate, but the portion was huge! The mussels were in a spicy, gingery, shrimp-based broth and were served with fries. The broth was perfect and definitely tasted more like something I’d expect to eat at an Asian restaurant. Also, thumbs up on those fries! 8.5/10 Gothic Revivals

Church Alley (4201 Canal St.)
OK, Church Alley has nothing to do with actual religious institutions, but they have the word “church” right in their name! And they serve coffee from Congregation Coffee Roasters (see review below). They used to be in Central City, in the Zeitgeist building, but moved to Mid-City a few years ago, into the raised basement space of an apartment building. The interior reminds me a lot of a brighter, less hip St. Coffee (see review below) with low ceilings and local art. I ordered a latte, an iced Lebanese coffee, and a breakfast panini. The iced Lebanese coffee was a shot of espresso, sparkling water, and orange blossom water. It was very much not for me, but my dining companion loved it. The latte was very good, but it was served in a glass which seemed really strange for a hot drink. The breakfast panini was excellent, and I’ll definitely be back for food again. It consisted of a smushed up avocado, eggs, goat cheese, and a black bean hummus served in naan. 9/10 Zeitgeists

St. Coffee (2709 St. Claude Ave.)
Saint Coffee has my favorite cold brew in town, period. It’s bold, full-bodied, and slightly fruity. Yes, the barista looks cooler than you ever will. But push past your fears, and order that coffee. 10/10 For That Cold Brew Alone

Saints and Sinners (627 Bourbon St.)
I’ve never seen Magic Mike, but I understand that Channing Tatum is a celebrity who people enjoy. What I do not enjoy is having to go to Bourbon Street alone for lunch (no one I knew was willing to accompany me to this one), nor did I enjoy this restaurant. What was that cheeseburger I ate? Fried cheese curds on a burger sounded like an OK idea. It was not. At least the building was pretty on the outside? (Please read and then ignore the “Our Story” section on their website. They have this whole blurb about brothels and Storyville, and I have literally no idea what they’re going on about since 627 Bourbon Street was never part of Storyville, and this building famously belonged to the Antoine’s restaurant family, who—as far as I know—never ran a brothel). Unless you have some friends coming in for a bachelorette party, do yourself a favor and avoid. 1/10 Magic Mikes

The Elysian Bar (2317 Burgundy St.)
The Elysian Bar is inside the old St. Peter and Paul Church rectory in the Marigny. The old school building and convent are now a fancy schmancy hotel, while the rectory houses a bar/restaurant and cafe. The rectory was built in 1875, and the renovation is one of the grandest I’ve ever seen; it feels like walking into a 19th century painting. Y’all, I’m not kidding: this place is a maximalist dream—think “Heavenly Bodies” night at the Met Gala. The Henry Howard-designed church is now an event space, but there’s a courtyard that you can eat in situated between the church and bar; and the stained glass windows shimmer rainbow light down into the courtyard. It’s magical. We ordered the chicken liver toast, smoked Gulf fish, fried brussels sprouts, and whipped ricotta. The restaurant is run by the Bacchanal people, so I felt like I knew what I was expecting; and for the most part, it delivered. The chicken liver toast featured a chicken liver pâté topped with a strawberry and beet mostarda. I didn’t think the sweetness of the mostarda worked with the earthiness of the pâté. Liver always has a certain bloodiness that I think pairs well with the tangy sweetness of onions, but the strawberry overwhelmed the liver. I quite liked the smoked Gulf fish. The fish was chopped up into a yogurty salad (think fancy tuna salad) paired with avocado and topped with pickled mustard seeds. I loved the fried brussels sprouts; they were served with almonds, pickled raisins, and bagna càuda, which is an Italian garlicky and sweet anchovy-based dip. Overall, the food was good, but it’s quite minimal—small plates/tapas style. So either go and plan on ordering like six dishes; or maybe just pop in, have a pastry and cocktail (or a coffee—their coffee supplier is Congregation Coffee Roasters. Are you sensing a theme?), and pretend you’re a fancy nun. 7.5/10 Heavenly Bodies

Congregation Coffee Roasters (240 Pelican Ave.)
Thanks to my Westbank-native spouse, I know that Congregation is inside an old record store in Algiers Point. Apparently, someone bought their first Prince album there; a momentous occasion to be sure! The building is truly beautiful. It’s bright and airy with stained glass windows, lots of exposed wood, and little alligators everywhere—well, drawings of alligators, that is. Congregation provides coffee to some of my favorite shops in town (as mentioned above), but I still hadn’t made it over to try their house cafe. I’m so glad I did!  We ordered a latte and a macchiato, and tried some of the food: a cucumber hummus toast, coconut rice pudding, and a salted chocolate cookie. The coffee was excellent, which I expected, but the food was also great! Hummus and cucumber is a classic pairing, so I knew it would work, but I give high praise because this hummus was so tasty! The coconut rice pudding was sprinkled with Rice Krispies, which made for a nice, crunchy addition. And salty chocolate is apparently yummy; who knew? So yeah, overall, charming spot, excellent coffee, and great food. Y’all, Algiers Point is so cute; why don’t I venture across the bridge more often? 10/10 Alligators