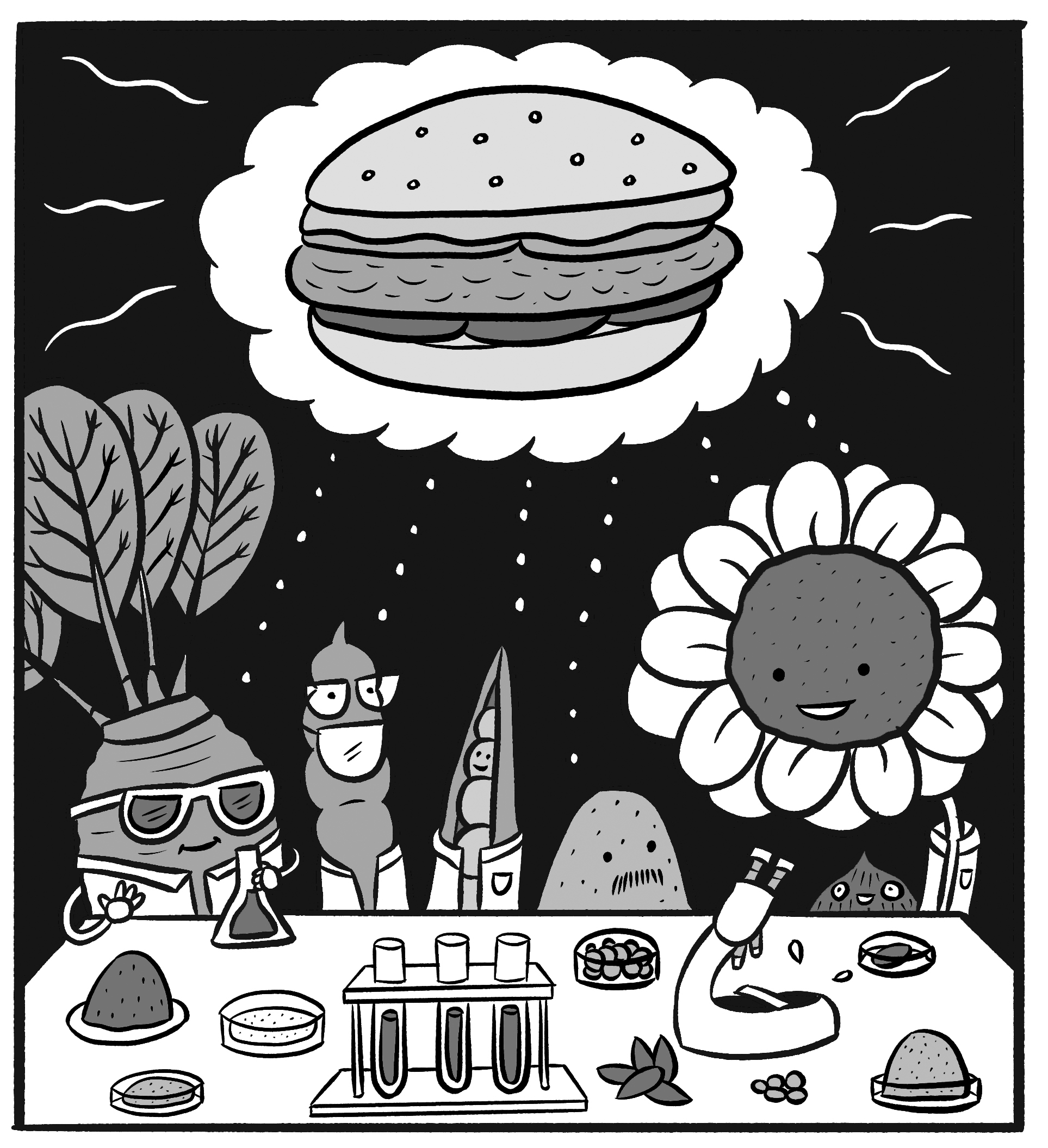 To Dream the Impossible (Burger) Dream

I’ve long been a fan of the veggie burger: grains and beans and mushrooms and beets all smushed together into some type of patty configuration. Delicious! I’m also a pretty big fan of meat-based burgers; I’m an omnivore, so I love it all! But I respect veggie burgers for being, well, veggie based, and beefy burgers for being made of cows. I’ve never actually wished that veggie burgers were more “real,” as in, more like meat burgers. But perhaps I’ve been in the minority, because there’s been some technological leaps in faux meat production within the past several years, and there are now veggie burgers—mainly the Impossible Burger and the Beyond Burger—that claim to taste exactly like ground beef.

The Impossible Burger is made of a “soy protein concentrate,” coconut oil, sunflower oil, potato protein, and yeast. Impossible Burger claims that it’s “made from plants for people who love ground beef—with the same flavor, aroma and nutrition you know and love.” What a claim!

The Beyond Burger is pea protein, coconut oil, yeast, and beet extract. I’m presuming the beet extract is the main component of the burger’s infamous “bleeding.” It claims that it’s “the world’s first plant-based burger that looks, cooks, and satisfies like beef.” Well, OK then.

I went to a couple local spots (all national chains because that seems to be where these items are found) that carried the Impossible and Beyond burgers, and picked up a Beyond Burger at a grocery store to make at home as well.

Ah, Cheesecake Factory, home of the infamous 300 page-long menu. Before heading over to try the Impossible Glamburger, I’d only been to Cheesecake Factory once before. I think it’s all just Sysco food heated up, right? Anyway, I passed over the regular veggie burger, which actually sounded pretty solid (mushrooms, farro, barley, brown rice, and black beans!) for the Impossible version. The server was initially confused, went to the back, and returned to ask how I wanted it cooked, which seemed odd and kind of irrelevant to me. I asked that it be prepared however it normally is, and she looked even more confused. Through further research, I learned that the Impossible Burger can be grilled or microwaved. Unfortunately, I didn’t know this beforehand, and the server didn’t inform me. I can’t be positive, but I’m going to assume it was microwaved, because it ended up being a totally different texture and experience than the grilled one I got later on at Burger King (more on that later). This was my first taste of the Impossible trademarked patty, and I immediately regretted embarking on this investigation. I HATED the flavor. It tastes like vaguely peanutty chemicals. The texture is pretty similar to a McDonald’s burger, so I guess they got that right, at least? My dining companion didn’t hate it as much as I did, but noted that she thought it might have been too processed for me. And she’s right—this stuff tastes fake. Seriously, it doesn’t taste like food. In other, more positive processed food news, their Cinnabon-flavored cheesecake was excellent, and I legit haven’t stopped thinking about it since that night. I don’t know who thought to marry a cinnamon roll and a cheesecake, but they were truly doing the Lord’s work. The Impossible Glamburger was an absolute fail, though. 0/10 Truly Epic Menus

I’m pretty sure I haven’t been to a TGI Fridays in 20 years (or maybe I’m thinking about Ruby Tuesday and I’ve never been to a TGI Fridays?) In any event, they carry the Beyond Burger, and I was happy to drag my hapless date there at midday on a Saturday. The waitress was super nice and signed us up for their mailing list so we would get a free appetizer (potato skins, come through!). She took my order for a Beyond Burger in stride. The Beyond Burger is much plumper than the Impossible, and the texture is much more akin to a Boca Burger than to an actual meat patty (Boca Burgers are a faux meat product made by Kraft. They have been around for more than 20 years and you can find them at pretty much any grocery store). The Beyond is supposed to “bleed,” but mine didn’t at all, nor did it look like it had the ability to. There was nothing pink about this patty, despite the beet juice. On to flavor! It kind of tasted like an unseasoned turkey burger, but also kind of like a Boca Burger. It definitely tasted less like weird chemicals than the Impossible Burger did, and I could see myself ordering this again in the future. The verdict from my dining companion was likewise a tentative thumbs up. Also, those potato skins were damn good. Do I like TGI Fridays? Is this who I am now? 8/10 Potato Skins

I ordered a regular Whopper and an Impossible Whopper so that I could try them back to back, bite for bite. Since I was now smart enough to clarify I wanted my burger grilled, I ended up with a totally different experience than I did at the Cheesecake Factory, even though they were ostensibly the exact same patty. I was dreading tasting it, but the Impossible Whopper is pretty good. I mean, it doesn’t taste exactly like the Whopper, but the texture is spot on, and the flavor is perfectly acceptable. It didn’t taste like weird chemicals! I don’t think anyone is going to Burger King expecting an amazing burger; you know exactly what you’re getting when you order a Whopper. And, by gum, I think as long as this is your mindset, you’ll be totally satisfied with the Impossible Whopper. Honestly, as long as the Impossible option is on the menu, I’m going to order it instead of a regular meat patty. So that’s a total win in my book. I’m hoping I can get an Impossible Big Mac soon. 10/10 Perfectly Adequate Options

It tasted like an expensive Boca Burger. I still didn’t get any “bleeding,” and for that, I’m most grateful. Beyond Burger is totally soy free, though, so it’s probably a good option if you’re both vegan and sensitive to soy. Otherwise, you may as well stick with whatever veggie burger you already know and love. It’s a fine faux burger, don’t get me wrong. But it’s also relatively pricey for what it is. 8/10 Boca Knockoffs

Twin Peaks
(various locations but no longer in the metro area, unbeknownst to me and, apparently, the Beyond Burger representative who sent me there)

Twin Peaks is not Twin Peaks-themed, which is what I innocently expected. Like, I thought I’d get coffee, pie, and a Beyond Burger. It’s actually a Hooters knockoff that doesn’t exist anymore locally, which I wish I would have known before doing full Audrey Horne cosplay and forcing my poor long-suffering dining companion into Agent Cooper drag (just kidding!). Beyond Burger lied to me, y’all! There is apparently still one in Baton Rouge, but after driving all the way to Gretna, just to feel the sting of disappointment, I decided not to truck it out to B.R. Why didn’t I just Google it first? I’m apparently not as smart as I look.