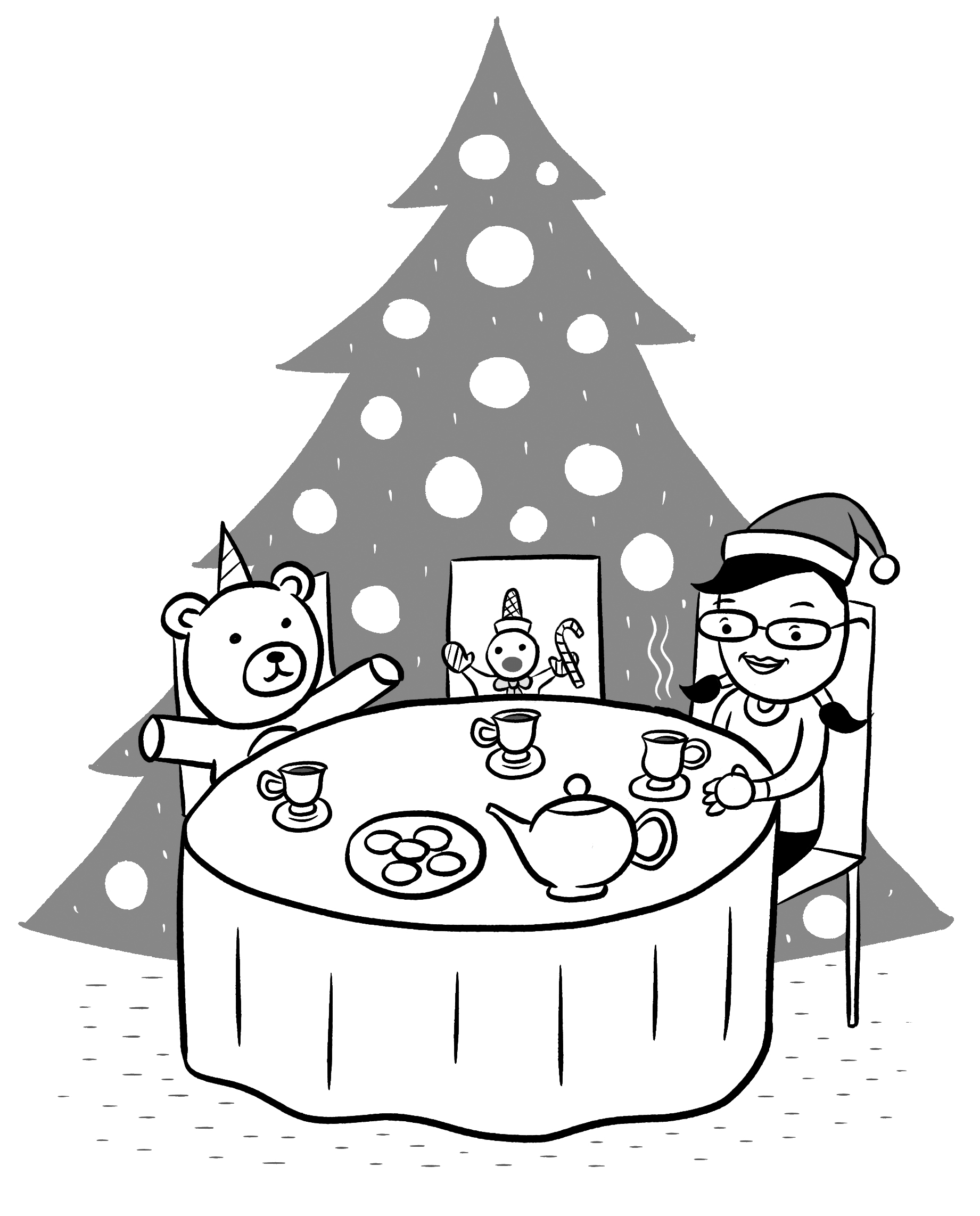 One of the seminal texts of my life was an autographed book I received for my fifth birthday, A Cup of Christmas Tea by Tom Hegg. It’s not really a children’s book exactly; it reads like “A Prairie Home Companion.” A busy man dreads having to visit his family for Christmas, but ultimately sits down and has a nice cup of tea with his elderly aunt. I have no idea why this book affected me so much—like, I’m tearing up just thinking about it—or why I’ve dragged it around with me for three decades. But it does partially explain why I associate the holiday season with tea and tea parties. Well, that and the annual Teddy Bear Tea at the Royal Sonesta, which, for baby Yvette, was the height of sophisticated dining. There are also holiday-themed high teas at the Roosevelt, the Windsor Court, and the Ritz-Carlton. Honestly, I recommend doing all of them at least once in your life. There’s nothing like eating teensy sandwiches and slathering scones with lemon curd, all while sipping on a nice oolong.

If you’d like a slightly less pricey experience, which also allows you to justify buying a bunch of cute mismatched tea cups at the thrift store, might I suggest a tea party at home? Grab a clamshell of petit fours, cut the crusts off some cucumber sandwiches, and force your friends to drink tea with you. You could go fancy, of course, and buy an artisanal tea blend (if you do, holler at your girl), but if we’re keeping things relatively inexpensive, you could do worse than just picking up some good old-fashioned Celestial Seasonings. Look, they aren’t the best teas in the world, but the price is right, they’re very easy to find, and they have the cutest packaging. And hey, we all know the real reason for the season: decorating your home with cute stuff. So to help you prepare for your holiday tea, I’m ranking and reviewing every single one of Celestial Seasonings’ 2019 holiday-themed teas. They’re listed here from worst to best with special attention paid to box cuteness.

This is a rooibos tea (a South African red tea) flavored with hibiscus, cinnamon, cranberry, vanilla, chicory, orange peel, chamomile, juniper berries, and—most unexpectedly—stevia. I don’t love rooibos tea generally, and this was no exception. It smells amazing, kind of like a good gin (shoutout to those juniper berries), but I found the flavor cloying and off-putting which, honestly, is probably the stevia. I don’t get pre-sweetened tea; if I want something sweet, I’ll add it myself! This was a fail. Box Cuteness Factor: More creepy than cute. A cult of woodland creatures worship a massive Christmas tree snowglobe as cranberries covered in snow dangle ominously in the foreground.

This black tea is spiced with cinnamon, ginger, chicory, pumpkin, luo han guo (a Chinese melon that’s like a cross between an avocado and a bowling ball that is dried and used as a sweetener), cloves, nutmeg, and stevia. Another pre-sweetened tea! Why, Celestial Seasonings, why? Again, this one smelled good but tasted artificial. Box Cuteness Factor: Existential anthropomorphic dread—a jack o’ lantern-headed scarecrow drives a tractor pulling a trailer, which holds yet another pumpkin-headed scarecrow man with his arms around a swan and a racoon. Behind him is a massive pumpkin bearing a blue ribbon. They travel through a pumpkin patch, ostensibly growing their own children. A badger peers from behind a tree.

This is an odd one! It’s a ginger tea spiced with cinnamon, chicory, roasted carob, and luo han guo. Because of the luo han guo, there’s a certain sweetness to this tea, but it isn’t as overwhelming as the stevia-sweetened ones above. I’m guessing it’s the chicory I’m tasting, but it’s almost coffee-like? Intriguing. I think it would work well with something salty to balance out the sweetness. Box Cuteness Factor: Very high. A gingerbread couple in whimsical scarves skate on candy cane ice skates in a land filled with cinnamon sticks and lollipops.

Caramel Apple Dream tastes like a harvest fair in Autumn. It’s an herbal hibiscus/chamomile tea, spiced with cinnamon, caramel, dried apple, orange peel, chicory, ginger, and sea salt. I enjoyed this tea quite a bit. It’s more spicy than appley and would be a nice accompaniment to ginger snaps. And, no, I didn’t taste the salt. Box Cuteness Factor: High. We have squirrels riding atop apples in a river of caramel, which snakes through a landscape filled with caramel apples.

This is an herbal milk thistle tea, with roasted barley, orange peel, and vanilla bean. OK, what’s weird is that this tea tastes quite a bit like Gingerbread Spice, but without the sweetness. It’s delicious, earthy, and unexpectedly bold; it would be excellent alongside actual sugar cookies. Box Cuteness Factor: Extremely high. A sugar cookie couple wearing hats ride in a tea kettle sleigh across Sleepytime Bridge. The sleigh is pulled by sugar cookie reindeer through a landscape dotted with cookie trees and a cookie snowman. Gumdrop lanterns guide their way.

Nutcracker Sweet is the most traditional of all the teas I tried: a black tea, spiced with vanilla and cinnamon. It was a surprisingly solid and tasty black tea; I splashed in a little almond milk and boom! Perfection. Also, I asked my tasting companion the next day what she thought of the Nutcracker Sweet, and she 100% thought I was talking about Tchaikovsky, and only then did I get the pun, which, of course, made me like it even more. You can pair it with anything you’d normally eat with black tea; this one is a classic. Box Cuteness Factor: Creepy. A nutcracker soldier leaning against a Christmas tree grimaces at two baskets, one filled with oranges, peppermints, and rainbow taffy; the other teeming with cinnamon sticks and walnuts. His expression is semi-terrifying.

This is a green tea infused with peppermint, orange peel, cinnamon, milk thistle, blackberry leaves, roasted carob, roasted chicory, and vanilla bean. I absolutely loved this tea! It pairs the cool fresh flavor of an herbal mint tea with the floral earthiness of green tea. It would pair very nicely with chocolate pastries or fruit. Box Cuteness Factor: Severely cute. Cheerful, hardworking polar bears wearing green aprons toil in a candy cane factory, proudly displaying their wares to an alpha bear who appears to be conducting an orchestra with a gigantic candy cane.

Here we have an herbal hibiscus tea, flavored with chicory, chamomile, rosehips, roasted carob, plum, cinnamon, ginger, and cardamom. This tea is excellent: spicy, aromatic, floral, with just a hint of the chicory bitterness to balance it out. Seriously, this smells like heaven and I would wear this tea as a perfume if I could. Sugar Plum Spice would pair well with fruity pastries or jams. Box Cuteness Factor: More surreal than cute. Blue and purple-haired fairies do ballet atop floating plums in a barren yet glittering icy hellscape. 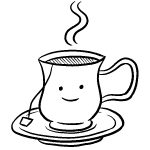