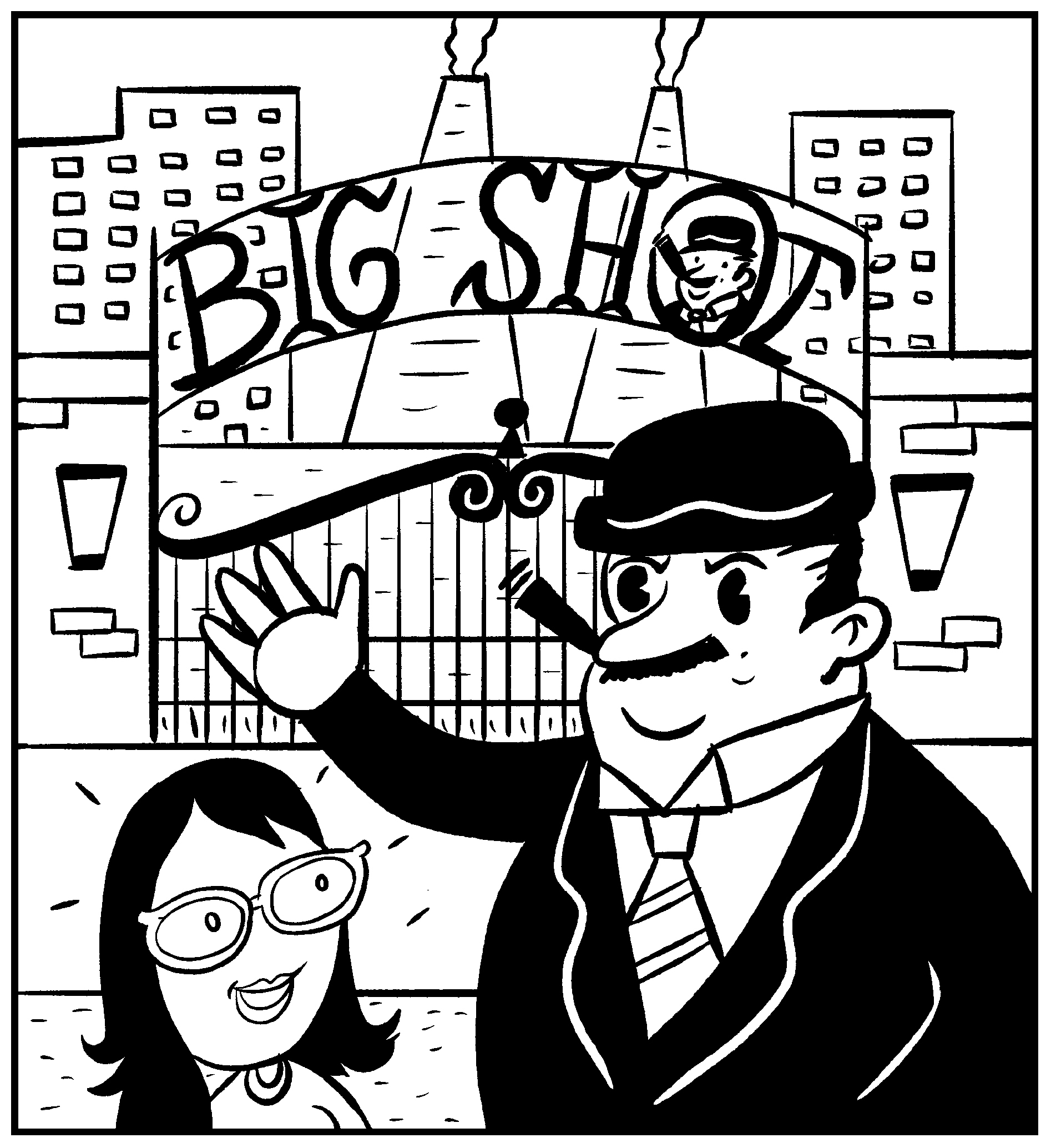 Big Shot is one of those Naturally N’awlins brands that doesn’t get enough respect. I dug hard and deep for some background info on the company and could only find a couple scattershot articles about the soda, none of which gave me a comprehensive view of Big Shot’s history. So, I decided to do the research and write one up myself!

In May of 1920, brothers Irbin, Maurice, and Samuel Pailet opened the Jefferson Bottling Company at 716 Frisco Avenue in Old Metairie. They bottled and sold various flavors of soda: chocolate, root beer, mandarine (sic), cider, grape, orange, cream soda, blackberry cola, pineapple, and concord punch. The family were active members of the Jewish Community Center and fairly well known in New Orleans Society. In 1935, they rebranded their signature root beer as “Big Shot,” making Big Shot Root Beer the fourth oldest root beer brand still being sold in the U.S. (after Philadelphia’s Hires brand, founded 1876; Barq’s, another New Orleans brand, established in 1898; and A&W, from California, founded in 1919). They expanded the Big Shot branding to their pre-existing “fruit flavors” by 1938. The bottle was emblazoned with the now iconic logo, a depression-era caricature of a tycoon: the cigar-chomping portly gentleman in a bowler hat and tux.

After Irbin Pailet’s death in 1962 (his obituary made the front page of every local paper), the business bounced around to various Pailet family members until 1982, when Sara Pailet sold the company to Robert Cory. Cory was a New York native who moved to New Orleans in 1961 and stayed, reportedly, because the local accent “reminded him of Brooklyn.” Cory became locally famous for making public appearances dressed as the Big Shot tycoon, complete with cigar, bowler hat, and tuxedo. After much public demand, Cory brought back the black cherry flavor, discontinued years earlier, using the original 1930s formula. In 1987, he sold the business to Affiliated Food Stores, from Little Rock, Arkansas. At the time of the sale, the available flavors were pineapple, strawberry, cola, black cherry, cream soda, orange, fruit punch, and grape. Production moved from the original Metairie factory to Winnsboro, Louisiana.

The company was sold again in 1992 to the National Beverage Corporation, headquartered in Florida. Production moved to Harahan, where Big Shot is still made today. While National Beverage Corporation is the same company that produces LaCroix, Faygo, and Shasta, they leaned in hard on the New Orleans connection, rebranding Big Shot as “New Orleans’ Own Big Shot.” In 1997, they produced a commercial featuring a dizzyingly surreal super-squad of former Governor Edwin Edwards, singer Charmaine Neville, city council members Peggy Wilson and Dorothy Mae Taylor, famous TV lawyer Morris Bart, and coach Mike Ditka (who had just started his three-year stint coaching the Saints).

Today, Big Shot feels ubiquitous and yet somehow not. I mean, Lil Wayne rapped about the soda in 2009, and a poll of locals quickly ignited heated arguments about the best flavors. But—and this was unexpected—I actually had some trouble finding Big Shot sodas. I could only find random flavors at small corner stores, and they had none whatsoever at the big grocery stores that I went to: the Mid-City and Metairie Rouses, and the Robért’s in the Marigny—though it has come to my attention that the Gretna Rouses has a Big Shot endcap! (That’s what I get for not heading to the Westbank.) Thank goodness I remembered (somewhere in the darkest recesses of my mind) that the Canseco’s in Gentilly has a dedicated Big Shot cooler, and they still carry every flavor! I wish all the obsessively NOLA folks (yes, I realize I’m one of them) would start demanding more Big Shot, and that restaurants, sandwich shops, and other hometown-proud shops would start carrying it. It’s time for a Big Shot renaissance, y’all.

Below is a rundown of Big Shot’s current flavor offerings, ranked in descending order from my favorite to least favorite (I’m fully aware these are going to be controversial rankings!).

Pineapple
Pineapple is the second oldest flavor that Big Shot offers, right after root beer. And, y’all already know what I’m going to say, right? It’s truly excellent. It’s a bright orangey color and tastes, well, unexpectedly classy; it’s like a vaguely tropical Orangina. Lots of folks count pineapple as their favorite and it’s obvious why. This would be fun to serve at a party.

Red Creme
Red creme is a classic: the color is a blue-toned red, and it tastes like bubblegum with strong notes of vanilla. Red creme has been on the Big Shot roster since the 1930s and it is pleasantly vintage-tasting. I kind of want to drink this all the time.

Pineapple Watermelon
Pineapple watermelon is a clear jade green and smells exactly like the classic pineapple. Taste-wise, you get pineapple but with a nice hit of that Jolly Rancher-style watermelon flavoring. I snuck it into a movie and was pleased with my decision.

Creme
This soda is perfectly clear and tastes like vanilla. Delicious.

Peach
This peach soda is the prettiest light-salmon coral shade and smells like bubblegum. Flavorwise, it was the most shocking. It doesn’t really taste like peaches until the aftertaste hits, and then it’s like peach-scented perfume. I want to mix it with lime sherbert. It’s weird and fun.

Grape
Wow, the scent of the grape soda is pure nostalgia. I was shocked when I saw that grape was one of the original 1920s pre-Big Shot flavors; doesn’t it feel more modern than that? I was also honestly surprised by how sophisticated this grape soda manages to be. Yes, it’s got that purple taste that is expected, but there’s something else in there. This one was a revelation.

Black Cherry
Black cherry is a lot of folks’ favorite flavor. It’s a gorgeous, jewel-like burgundy and smells like what I imagine a child’s idea of fancy perfume is. It tastes sweet and dark. This one would have ranked higher but honestly got knocked down because some of the other flavors are just so good. This one is a classic for a reason.

Pineapple Blue Bayou
My tasting companion swears that there was a flavor in the ‘90s called Jazz n’ Blueberry; while I can’t find any evidence that’s true, there is an existing flavor of Juggalo-fave Faygo by that name. Since Faygo and Big Shot have had the same parent company since 1992, maybe there was a crossover at some point? In any event, she is 100% convinced that pineapple blue bayou is just a reskinned Jazz n’ Blueberry. It looks like Windex and tastes vaguely like the pineapple Big Shot, but also sort of like blue Powerade.

Root Beer
Big Shot, as a brand, started out with root beer and thus, I expected a classic root beer flavor. What I did not expect was an odd smokiness! This is not a Barq’s! In fact, it reminded me of the more expensive, fancy root beers like Abita and Virgil’s, which I guess makes sense, since Big Shot has been using relatively the same formula since 1935 (the only appreciable difference is the use of corn syrup instead of sugar). I could see this really appealing to someone who wanted a less sweet root beer. (But y’all know I like sugar.)

Cola
I’m a diehard Coca-Cola fan—get that Pepsi nonsense outta my face—so I was super nervous about trying Big Shot’s cola option. It’s fine. I mean, it’s definitely superior to Pepsi, but it’s not a Coke. It tastes like an off-brand Cola. You can skip this one.

Fruit Punch
Fruit Punch is a bright, pleasant red, but it tastes like Hi-C. I did have a couple people tell me this was their favorite flavor, though, so it might just be personal preference!