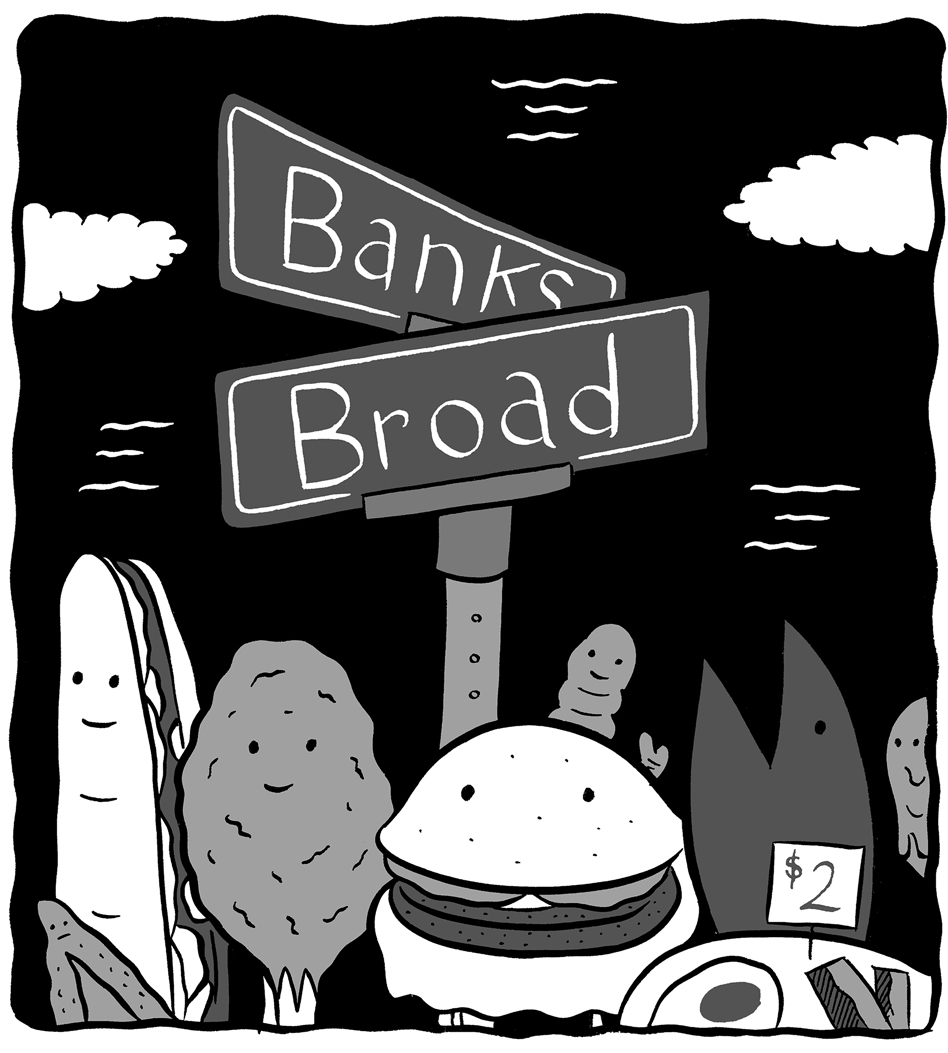 I drive past the intersection of Broad and Banks pretty much every day of my life, so I couldn’t help but notice that there are so many new restaurants over there. We’ve already discussed my love of the Banks Meat Market—those whole loaf poboys stay legit—but there are so many other options on Broad and Banks right now! This month I decided to check out a few places I’d never been to before.

Fharmacy is in the building that used to house Dis & Dem—Dat Dog’s now defunct burger offshoot. It looks basically the same inside. I’m not sure if they changed anything at all, which, you know, that’s fine. I’ve heard a lot of people saying that Fharmacy has the best burgers in NOLA, so I decided to go ahead and try two of them: the Dr. Tan burger, which is dressed with grilled jalapeños, grilled onions, a house slaw, pepper jack cheese, chipotle aioli, and bacon; and the Cali Burger, which is topped off with guacamole, mushrooms, Swiss cheese, a chipotle aioli, tomato, lettuce, and alfalfa sprouts. Let me get this out the way: I did not enjoy the Cali burger, at all. The guacamole was oddly sour (did it have vinegar in it?) and the whole thing was so wet that it became inedible about a third of the way through. Soggy burgers are a real sticking point with me. I want my buns to maintain their structural integrity, and if I’m getting one of your signature burgers, I expect you to know how to put it together so it doesn’t deconstruct. But, good news—the mysterious Dr. Tan was much better. The grilled onions worked surprisingly well with the house slaw, the slaw didn’t fight the aioli, and the whole thing was held together with the melted pepper jack. Win! But let me be clear: I don’t think these are the best burgers in the city. That award still goes to my beloved Siberia. So, order the burgers if you want, but you should know they absolutely weren’t my favorite things on the menu. They do a Mussels Monday special which is truly lovely—steamed mussels in your choice of sauce (I like the Asian) topped with skinny, crisp french fries. The other standout: chicken wings. OK, at this point you’re probably all exhausted with my chicken wing obsession, but these wings are excellent. The Vietnamese lemongrass wings are vaguely reminiscent of my #1 wings in the city—shoutout to Tan Dinh—but the Cajun style are also surprising, spicy, and complex. I may be alone in my indifference towards their burgers, but the wings and mussels make up for it. 7/10 Wing Obsessions

Chef D’z is in the old Big Cheezy location on Broad. I noticed them because they have quite a lot of rather prominent signage advertising their $2 breakfast. I really wanted to hit up said breakfast, but they aren’t open on Sundays, which is really my only free morning. So I popped in for a weekday lunch instead, and was immediately charmed by how cozy it is in there! Since I had to go alone, instead of with dining companions, I didn’t get to order as much as I usually would. But since it was a Monday, I leaned in and got the red beans and rice special, which came with fried chicken and cornbread, plus the Bon Temps Rolls as an appetizer. I’ll start with the appetizer, which really could have just been a meal. The Bon Temps roll consists of crawfish, crabmeat, and chicken, with spinach and pepper jack rolled up into a flour tortilla before being deep fried. It was definitely one of those “what am I doing with my life” moments. Like, this was a weird dish. But it was also really tasty—bizarre and tasty. It’s a combo of things I would never have dreamed of, but it works. The creaminess of the filling is nicely offset by the relative crispiness of the deep fried exterior, and it reminded me of a gigantic Southwestern eggroll. On to the red beans and rice: y’all, this is where it’s at! The beans were creamy and well-seasoned, and they tasted old-school and nostalgic. It reminded me of going to eat at a friend’s house in elementary school, if that makes any sense. The cornbread wasn’t too dry (my usual complaint), but it was somewhat overly sweet for my taste. The fried chicken, however, was banging. It’s spicy without being too hot, and perfectly battered. I’m very excited to go back and try more—especially that $2 breakfast! I’m just going to have to wake up early and go over before work, because something tells me it’ll be more than worth it. 9/10 Gigantic Southwestern Eggrolls

Marjie’s is cute! I like the ‘70s decor, mismatched dishes, and furniture. I took several dining companions with me so I could try a panoply of dishes. The first thing I should note, though, is that ordering was actually kind of difficult. We were given three different menus and there was a specials board, so there were a lot of options. But putting the options together to create an actual meal was challenging, as you’ll see. We ordered charred brussels sprouts, fresh cracklin, smoky cabbage, fresh field greens, hush puppies, Des Allemands Catfish, Cornmeal Crusted Yardbird, and the fried shrimp appetizer special. The first thing brought out to the table was the charred brussels sprouts and fresh cracklins. The brussels sprouts were not what I was expecting at all, but in a good way. They were shredded and served in a chili-laced fish sauce—delicious. The fresh cracklins were supposedly turmeric and chili spiced, but they ended up tasting like cracklin, nothing more (The fresh chicharrones at Ideal, a block over, are honestly better). Next out were the cabbage, fried shrimp, and hushpuppies. The cabbage tasted exactly like the brussels sprouts, which was kind of disappointing. The fried shrimp were huge, whole fried shrimp, head and all. And you know what that means, right? They didn’t clean the vein out of the shrimp, which feels a little lazy. I still tried one and wasn’t impressed by either the shrimp or the dipping sauce, a buttermilk-y ranch which would appear again with the catfish (which were coated with the same rather nondescript, yet inoffensive, batter as the shrimp). Speaking of the catfish, this dish was a little confusing. The catfish came out in two tiny strips that were covered with fresh field greens—the same ones we’d ordered as a side because we had no idea they’d also be on this dish—and topped with crispy pig ears (which turned out to be the cracklins we’d already eaten). I actually thought that dish worked well together and was tasty, but I also kind of wish, when we explicitly asked the waiter what this dish came with, that they had warned us we were ordering all of its component parts separately? There was just too much redundancy. The hushpuppies looked like kibbeh, and were very sweet; they actually would have been a fun dessert, but didn’t really work as a side dish, for me. The Cornmeal Crusted Yardbird, however, was excellent. The chicken was lightly battered, surprisingly spicy, and coated with Steen’s cane syrup. This was some good fried chicken! I didn’t understand the dipping sauce on the side, though, and thought it was completely superfluous to the dish. I should note that one of my dining companions also ordered the fried chicken. And while I got two breasts, they got a leg and a thigh, so consistency was a little off. Overall, I actually liked the restaurant. It’s cute and charming, and I liked most of what I ordered, but the menu was overwhelming and confusing. I ended up eating the same things over and over again, because there was no way to understand that they were the same things. So while I probably ordered incorrectly, I really wish the menu would have been a little clearer, or that the waiter would have explained it better to us. 6.5/10 Crispy Pig Ears