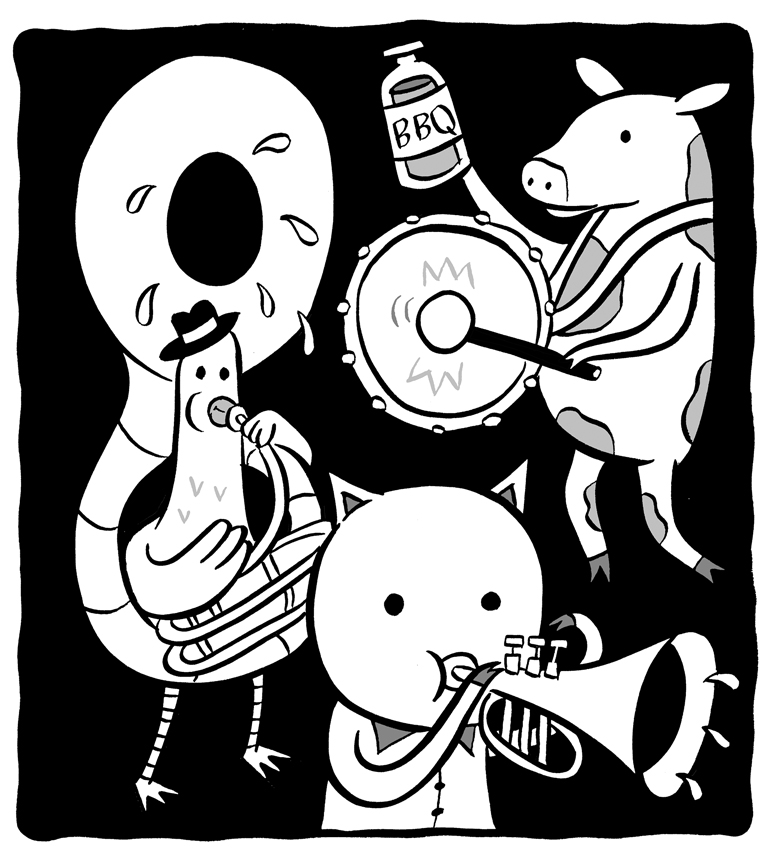 New Orleans is not a town historically known for its barbecue. Luckily, there’s a slew of restaurants now that have set out to change our reputation. I’m especially grateful because I love smoked meat products, but I have little interest in outdoor activities. I also have long luxurious hair that I don’t want smelling like smoke all summer long. The obvious solution to my dilemma is to pay someone else to do the barbecuing for me, and I was very excited to try some new spots.

Central City BBQ
(1201 S. Rampart St.)
Central City BBQ is very much a newcomer to the scene. They opened late last year in the old B&L Fresh Seafood warehouse. The restaurant is large and airy, and the night I went, we were the only table there (which may be why we got such royal treatment). Or maybe they’re that nice to everyone? Or maybe they liked us because we were a table of four that ordered almost everything on the menu? We ordered the sampler platter: brisket (you can pay extra for burnt brisket ends), ribs, pulled pork, chicken, sausage, and boudin. For our sides we got macaroni and cheese, cole slaw, beans, and spoon bread. But we didn’t stop there! We also got the smoked wings (sweet style), meat pies, gumbo, and greens. And they threw in two free desserts! OK, where to start? I’m pretty biased, as chicken wings are my single favorite food item in the world, but these wings are something else. They were easily the best thing we tried. They were sweet and piquant and I want to go back for them as soon as I can. Coming in a close second to the wings were the burnt brisket ends. Spend the extra for them! The ribs were melt-in-your-mouth tender and a little sweet. The boudin was only fair, but the sausage was excellent. There’s been some past controversy surrounding my taste in mac-n-cheese, so I hope that I redeem myself by recommending the bacon mac-n-cheese here. It’s creamy but with a nice, firm, brown crust on top (pssst—more macaroni recommendations are coming very soon… as in a couple paragraphs soon!) I was quite fond of the meat pies, which were seasoned more like empanadas than I expected. The gumbo was not really gumbo, but a fairly tasty meat soup nonetheless. The greens were over-salted and inedible. The spoon bread was sweet, the texture good, and I loved it. 9/10 Free Strawberry Cobblers

McClure’s Barbecue
(3001 Tchoupitoulas St.)
McClure’s very recently closed up shop on Magazine Street and moved full time into the NOLA Brewing Company Tap Room on Tchoupitoulas. I tried the ribs and the chicken, and I honestly thought they were both a bit meh. The chicken was very dry and icebox cold, which was confusing. The ribs were tough and likewise oddly chilled. I quite liked the NOLA East sauce, though, and I thought the macaroni and cheese was perfectly adequate. The roasted corn and jalapeno cornbread was my favorite thing I tried: sweet, heavy, and spicy. I’m not sure that’s really enough to draw me back in, though, especially since there’s so many other options out there. I think it might have been more worth it if I’d been drinking beer, since I was inside of a brewery. But I don’t drink beer, so… 3/10 Ice Boxes

Blue Oak BBQ
(900 N. Carrollton Ave.)
I don’t normally talk about Happy Hours here because, like I mentioned, I’m not much of a drinker, and cocktail specials will straight up never be a reason for me to go out to eat anywhere. But food specials? Well, now you’ve got my attention. I stumbled onto the Happy Hour at Blue Oak and was pleasantly surprised because I got to be extra greedy. I got the sampler platter (ribs and pulled pork) but also ordered smoked wings, sliders, and nachos! I’d been told that I needed to try the smoked wings with jerk sauce by a few different people, and they were absolutely right. Out of all the various house sauces and specialty sauces I tried, the jerk sauce here was rivaled only by the NOLA East sauce at McClure’s, which was sadly lacking in the actual smoked meat category. The ribs were very tender; the meat was falling off the bones. The pulled pork was just fine, but I don’t think I’d get it again. I didn’t care for the sliders, but my dining companion loved them. The bbq nachos were extra fun, though, and thumbs up to the macaroni and cheese here. I’m excited to head back—though, next time it might just be for wings and nachos. 8.5/10 Specialty Sauces

Frey Smoked Meat Co.
(4141 Bienville St. Suite 110)
So, my favorite thing at Frey is a milkshake that is topped off with a Cookie Monster face cupcake resting atop a bed of cookie crisps! Oh, and Cookie Monster has a chocolate chip cookie sticking out of his mouth. Like, I don’t love the taste of it necessarily, but I enjoy the pomp and grandeur of the presentation. But since we’re supposed to be talking about barbecue, I’ll move on from the rather baroque milkshake offerings and on to the pork belly poppers, which are truly a thing of beauty. They’re unbelievably soft but with a definite crisp, like a hunk of butter made out of pork that disintegrates in your mouth. I quite like the smoked wings with Alabama white sauce, which I have to admit I’ve never actually had in Alabama, so I can’t say if it’s authentic (but it’s definitely good). As for sides, I strongly prefer the bacon and pepper jack macaroni and cheese to the other mac options. I thought the jalapeño was too mild to call itself jalapeño, and the flavor of the pulled pork option was somewhat muddled. As for other sides, the brussels sprouts were delicious and unexpectedly sweet. Everyone at my table loved the bucket o’ biscuits, but I thought they were kind of dry, and prefered the cornbread. Oh, I should also mention that if you go with eight people, you can order the Family Fun Feast, which is every meat and every side, and they just keep bringing out more until you tell them to stop—perfect for gluttons like me and my friends! 8.75/10 Baroque Milkshakes (Feel free to steal that for a band name!)