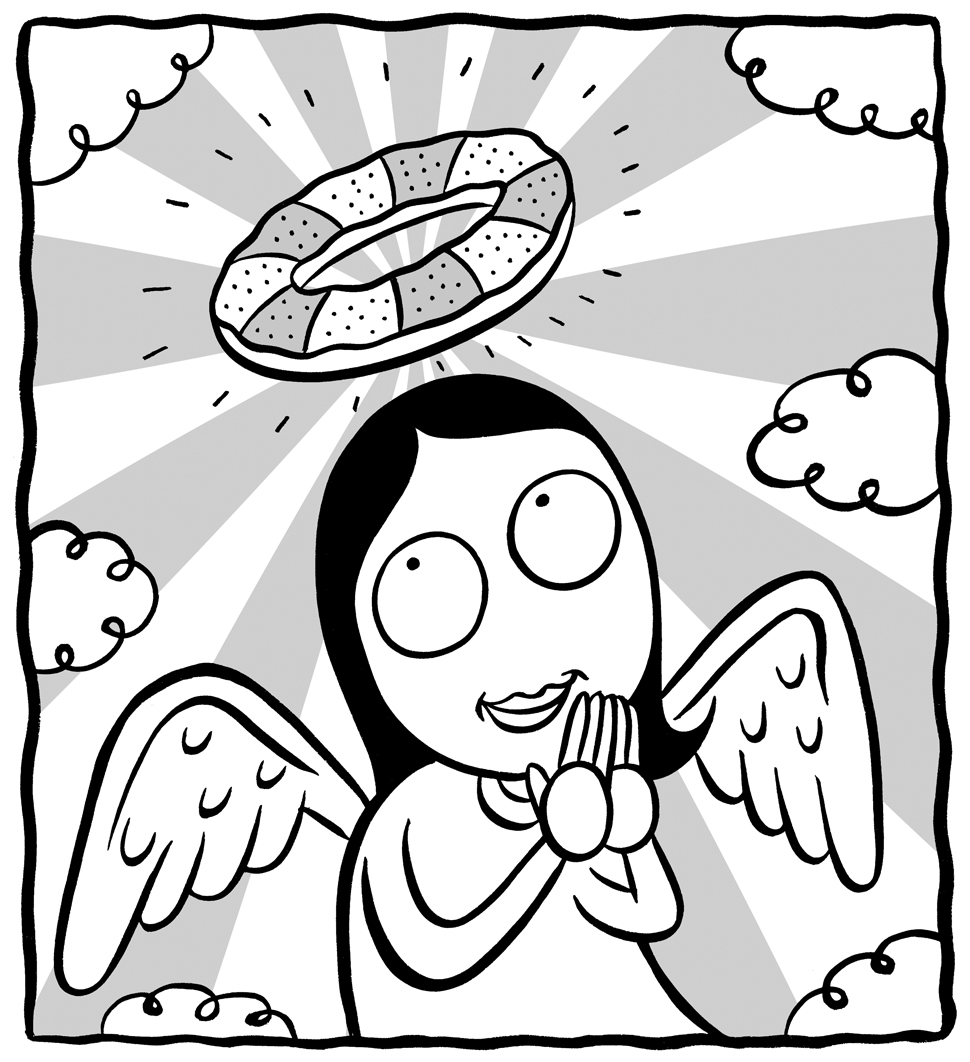 My first article for ANTIGRAVITY (February 2015, #127) was a citywide hunt for the best king cake. As I mentioned then, my longtime fave is from Dong Phuong, but this year I wanted to try out some places I either hadn’t been to before, or just hadn’t been to in a while. I’m totally giving up sugar for Lent because I went so overboard, y’all. Oh well, ‘tis the season, I suppose.

Antoine’s (1300 Stumpf Blvd., Gretna and 3030 Severn Ave., Metairie)
I started out this year’s journey at Antoine’s, a rather nondescript little spot on the West Bank, although I hear there’s also one in Metairie now. Still, in my mind, Antoine’s is forever linked with the West Bank, and it’s always the place that friends from that side of the river recommend. I mentioned that the building is unassuming, and the cake is no different. It’s a weird lump of a cake—everything about the massing is strange—like a large poochy pastry. But while it’s not a looker, it is very tasty: cinnamony and sweet without being overly cloying. The texture is very dense and this cake is quite heavy (lifting the box took more muscle than I expected, and I almost dropped it!). The frosting is appealingly smooth and surprisingly light in the mouth, so I’d say this one easily holds its own in the traditional king cake category. I’d avoid the filled ones, but that’s just personal preference. 9.5/10 Weird Lumps

Shake Sugary (3304 St. Claude Ave.)
Shake Sugary is such a charming location and the workers are always so friendly, but I’ve never been wowed by their fare. I’ve gotten a few things through the years, and it’s always just been “fine.” A couple years ago, I tried the vegan king cake, which was a “no thanks, never again” proposition, but I felt like I owed it to them to try the regular non-vegan king cake for comparison. And well, it wasn’t great. OK, the flavor was fine (if a little light on the cinnamon), but the texture was so gummy I couldn’t even finish a slice. It was as if gluey threads were running through the dough. I’m sure this would be fine if you’re a person who has never had a king cake, but for a seasoned veteran like me, it was rather disappointing. 1/10 Gluey Threads

Bittersweet Confections (725 Magazine St.)
Let me preface this by saying I ate at a Bittersweet Confections satellite location, so it’s possible that what I got wasn’t the best they have to offer. They were selling king cake by the slice, so I ordered a piece of the regular and a piece of the chocolate. The regular was just as gummy as the one from Shake Sugary. I don’t know if this is a reflection of how long the cake had been sitting around or just some weird problem with their batter, but this wasn’t a problem I’d ever noticed before this year at any other bakery. What’s going on? Is it because it’s 85 degrees outside? I don’t know. The flavor was mediocre at best. It was just a big doughy piece of food, vaguely sweet, no cinnamon that I could discern, and just sort of there. The chocolate king cake tasted exactly like a giant chocolate glazed donut—a very good donut, but a donut nonetheless. I mean, just eat a donut if you want a donut. 2/10 Mediocrities

Adrian’s (4710 Paris Ave.)
Adrian’s was a bakery that I’d never heard of before but was very pleasantly surprised by. I’m not usually in the market for a filled cake but a coworker brought in the pecan praline version and man, it was good! I know I’m supposed to be all eloquent and profound but all I can say is that this is a good cake. The texture was heavy and moist, the topping was like… okay, you know if you’re eating a praline and you just hold it in your mouth and eventually the sweetness sort of wears away and all you’re left with is a vaguely pleasant grittiness? I don’t even know if that makes sense. It tastes like you’re eating a praline, but you’re six years old. Maybe I’m getting too esoteric here. What I mean is that this tastes like nostalgia, but not necessarily like something you’ve had before. I don’t know. Just go get the cake and then report back. Maybe I’m losing it. 10/10 Unremembered Memories

Mardi Gras Cakes/Caluda’s ( found at drugstores and corner stores, city-wide)
Antoine’s, which we previously discussed, used to be the cake you’d find pre-packaged at Walgreen’s. Now that honor goes to a brand called Mardi Gras Cakes, which is distributed out of Kenner. Sadly, I wasn’t able to find out any more information about its pedigree. Flavor and presentation-wise, Mardi Gras Cakes is very similar to Caluda’s, another cake you find pre-packaged a lot; so similar that I’d venture to say they’re the same cake under different branding. In any event, it’s not good at all. To be fair, they probably just sit there on the shelf forever, getting sticky and strange and absorbing weird plastic chemicals. But even fresh, I doubt these cakes are the sort of thing you’d want to eat. I know it’s tempting to just grab the first thing you see, but don’t do it! Go to a bakery— you know better than to buy a king cake at the drugstore, right? I took this one for the team. 0/10 Weird Chemicals

Tastee (901 Harrison Ave.)
This one is about to get contentious, so get ready to be filled with ire. The absolute pinnacle of king cakes for many NOLA old timers is McKenzie’s. Tastee famously acquired the rights to McKenzie’s recipes when that storied fave went out of business in 2001. I’m going to give away my age here, but even though I was already an adult in 2001 (OK, barely an adult, but I could have voted or served in the military), I don’t know if I can accurately remember what McKenzie’s cakes tasted like. But I do remember loving them. Let me now insert a ten page-long rumination on the vagaries of memory and how nostalgia colors and influences desire—just kidding! I won’t do that! What I will do is affirm that I can’t judge whether or not Tastee’s king cakes are a fair approximation of McKenzie’s, but—and here’s where things get controversial—I don’t really care for them. Tastee’s king cake is a round racetrack of bread with some colored sugar on top. That’s it. That’s all there is. Classic king cakes fall into two general types: the dry bready cakes, à la Tastee’s McKenzie’s throwback, and the dense moist cinnamon-rivulet variety, like Antoine’s or Adrian’s (or my beloved Dong Phuong). I have a well-documented and longstanding preference for the moist cinnamon-rivulet variety but I don’t hate the dry, bready ones. They’re just never my first choice. That being said, I do kind of hate Tastee’s cake. It’s just so incredibly boring. Sorry, y’all, not for me. Now, put your pitchforks away. You can keep eating your dry-ass bready king cake, I’ll stick with the moist cinnamon-rivulet ones. There’s room for all types, even if there’s no accounting for taste. 1/10 Cakes That Are So Dry The Sugar Just Falls Off The Top

La Boulangerie (4600 Magazine St.)
La Boulangerie has gone down in quality after the change in ownership, but this is still a solid French style king cake—far better than their classic NOLA style ones in my opinion. 7/10

Croissant D’or (617 Ursulines Ave.)
So flat! But it comes with a little Virgin Mary charm and the cake is tasty and quite different from the others, which is always fun. 8.5/10

Mister Gregory’s (806 N. Rampart St.)
I was blown away when a friend gifted me a Mister Gregory’s French style cake. It reminded me of a giant Cuban pastelito, which is the highest compliment I can think of. 10/10