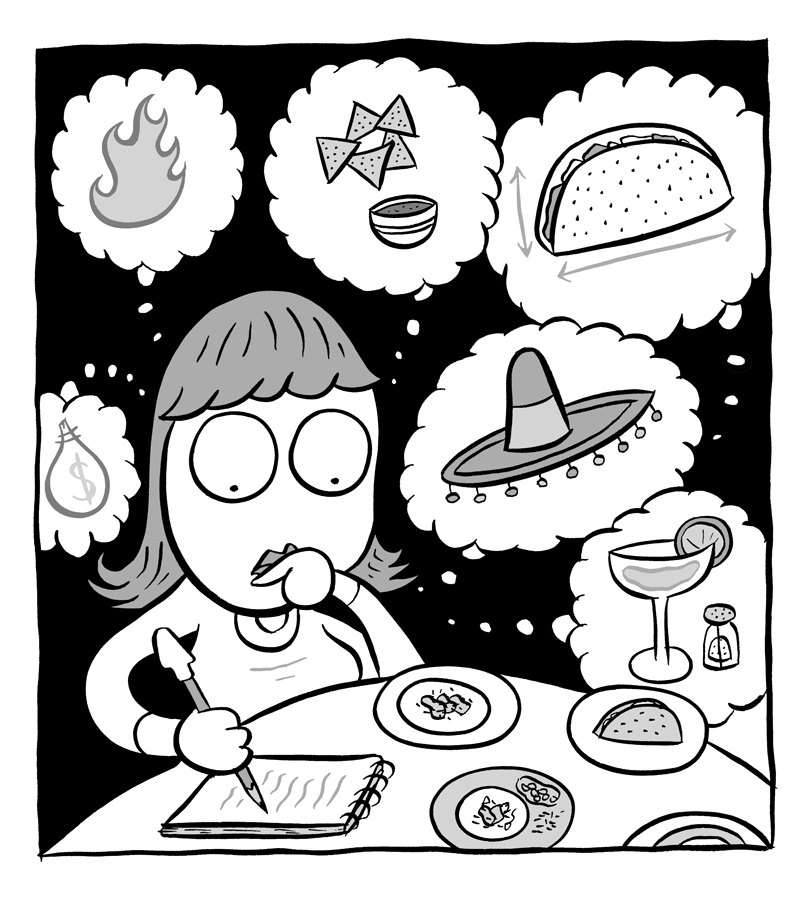 A question that I get asked a lot is if there is actually good Mexican food in New Orleans. Like, dude, we’re a state away from Texas… why is it so hard? In a quest to find the best, I ate a bunch of tacos. There are so many more I need to try, though. Where’s your favorite? Who did I forget?

Casa Borrega
(1719 Oretha Castle Haley Blvd.)
Casa Borrega is one of those “throw everything including the kitchen sink up on the wall as decoration” type places, which usually annoys me, but it works. I’m not sure if I understand the stacks of cassette tapes, but whatever. Here, the tacos come three to an order, and there’s three different types to choose from. Because I’m a sweet talker, I coaxed the waitress into letting me try one of each: lengua, steak, and chicken. I’ve heard really good things about the fish taco special for lunch, but sadly, I wasn’t able to get there on a day when they had it. Casa Borrega’s tacos are of the meat, onions, lime, salsa, and nothing else variety, which is my favorite! I’m an offal fan, and I usually like tongue, so I was pretty hyped to try the lengua tacos. While I thought they were good, they weren’t nearly as good as the chicken. The chicken was better seasoned, and not as tough, which is strange because tongue isn’t known for being a rubbery meat. Luckily, the steak was very tender—and surprisingly tangy—but the chicken was the clear star. It was bright and citrusy, and generally smelled really appealing. I couldn’t place what it was, but it was definitely distinctly fragrant. Also, they use homemade tortillas, which put them a clear cut above some of the other taquerias I tried. Casa Borrega also had the best guacamole I tried anywhere. 8.5/10 Kitchen Sinks

El Gato Negro
(multiple locations)
I really don’t like to talk about prices in my reviews, but here’s the thing: El Gato Negro’s taco pricing is completely nutsy-cuckoo. Their tacos are sold as singles, and one taco is $5.75. OK, that’s a little steep, but it’s not horrific. But, their definition of taco is literally just the tortilla and the meat; if you want anything else, you pay extra for it. Lettuce—literally the cheapest food product you can slap on a plate— costs 50 cents. Other items range anywhere from one to two dollars. So, let me put that into perspective; if you want a regular old, plain Jane, American style taco with lettuce, tomatoes, cheese, guacamole, and sour cream, that will run you a smooth $12. Oh, did you want habanero salsa with that? You’ll be paying $13.75. Who wants to pay that much for one totally lackluster, completely average-sized taco made with store-bought tortillas. Do you want a more traditional taco with onions, cilantro, and pico? Sorry, boo—they don’t even have that as an option. In the interest of not paying $48 for three subpar tacos, I only ordered one: the shrimp. And it was OK. I mean, it wasn’t bad, but it also absolutely wasn’t worth my time. The frozen carrot margaritas are really good, though. Maybe go for drinks and eat elsewhere? 1/10 Plain Janes

Taqueria Corona
(multiple locations)
Let’s talk about Taqueria Corona’s decor. In addition to the piñata and the random sparkly rainbow lights (which I actually quite liked), there are a truly overwhelming amount of photos of Emiliano Zapata. I counted no less than twelve on one wall alone. Is the owner a hardcore revolutionary? A fan of agrarianism? A hater of Porfirio Díaz? I don’t know, but if you’re looking for tacos, and really enjoy looking at images from the Mexican Revolution, this could be the place for you. Except that, for the most part, the tacos aren’t that great. They aren’t awful, but, with the exception of the fish tacos, they also aren’t anything I’d feel the need to go back for. The pulled pork was interesting; I don’t think I’ve ever had barbecue sauce on a taco before. At first I loved the idea, but the more I ate, the less I enjoyed it. The grilled chicken were extra boring; they didn’t taste like much of anything. The fish tacos, however, were awesome. They do them California or Baja style: fried fish, cabbage, onion, cilantro, and spicy mayonnaise. They were sweet and tangy and the perfect accompaniment to my favorite thing at Taqueria Corona, the black bean soup! I know that I’m notoriously not a big soup head, but I really like theirs. And whatever, I’m allowed to be a multifaceted human being with tastes that grow and evolve over time. I like the soup, OK? Oh, and I suspect they use store-bought tortillas, but at least they use the high quality ones. 7/10 Peasants Revolting

Taco Bell
(various locations)
Did you know that if you soak a tarnished penny in a couple packets of Taco Bell’s mild sauce, it comes out all shiny and new looking? 6/10 Dirty Pennies

El Pavo Real
(4401 Broad St.)
First things first: this place is very cute. I like that they eschew stereotypical Mexican restaurant decorations (you know what I mean: sombreros and piñata everywhere—it’s not necessary y’all) and go for something a little more restrained. It’s just lovely ceramic tiled floors, whitewashed walls with old wrought iron security bars hung up like paintings (it works), and bright, vividly colored oilcloths on the tables. I find it restrained and appealing, and it actually sort of looked like a restaurant that I went to in Merida years ago, which was also housed inside an old pharmacy, just like El Pavo Real. On to the food; instead of free chips and salsa, they give you spicy popcorn! I’m a huge popcorn superfan (RIP Oxalis, your buttered rum popcorn will be missed), so right off the bat, I was rooting for them. That popcorn is really good, and everyone gets their own little bowl! I tried the chicken tinga, pescado frito, and al pastor tacos. The most important thing first—they used very good homemade tortillas! The pescado frito, much like the fish tacos at Taqueria Corona, were Baja style. They were also excellent. The fish was delicately fried and the mayo was tangy and bright. The al pastor were sweet and just a little spicy; I think the salsa on them has pineapples in it, or at least that’s what it tasted like. The chicken tinga were good but not as excellent as the other choices. Also, I highly recommend that you try the rajas con queso, an appetizer that sort of feels like deconstructed nachos. I know that’s a weird description, but it’s a cheese dip with roasted peppers, onion, and corn, that ends up being way heartier than it sounds. 10/10 Peacocks