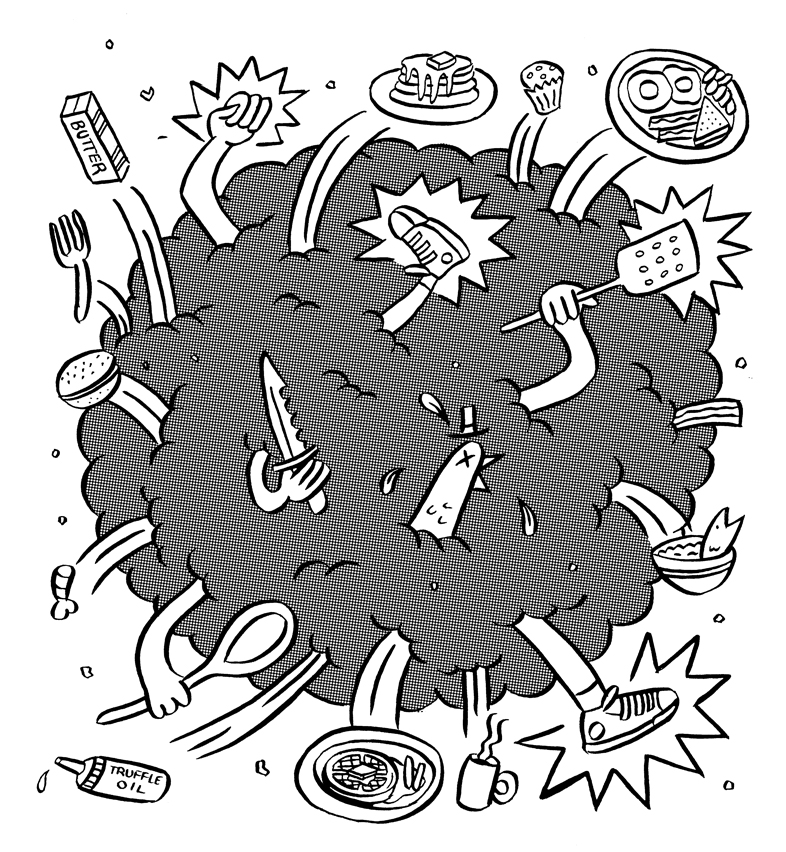 I’ve had a lot of people ask me why I haven’t written about breakfast spots before, and honestly, it’s because I thought that breakfasts were all the same. If you’ve eaten scrambled eggs and bacon at your house, you’ve eaten scrambled eggs and bacon at the fanciest restaurant in town. Perhaps the eggs have been drizzled in truffle oil and the bacon is made from wild boar, but differentiating between one breakfast place and another seemed almost entirely a question of locale and aesthetics, which led me to think a lot about the spaces these restaurants inhabit, as well as the food they serve. And initially, I was just going to review the buildings that these restaurants are in, but as it turns out, the food isn’t actually all the same (or at least, it doesn’t have to be). Also, in one the most no duh moments of my life, I realized that there are so many breakfast spots, that this may be a topic I have to revisit in the future—so thank you to everyone who pushed me to look into early morning eats! It’s not something I would have ever done on my own.

Sassafrass (2501 Leon C. Simon Dr.)
Restaurants in strip malls can be a tough sell. No matter how good they are, it’s weird to call up your friends and ask them to meet you at a place that’s inside an old Blockbuster Video, near a Rouses and a Walgreens. Sassafrass is entirely charmless, aesthetically speaking; the interior looks like it was decorated by a convention of aunties who love Kirkland’s. But I have several friends who swear by the place, so why not? I went on a Sunday morning and ordered the chicken and waffles. My dining companion ordered the fish and grits. The chicken was crispy and expertly seasoned, the waffles puffy and perfect. The fish and grits was the surprise winner, though—tender, perfectly seasoned catfish floating atop creamy grits. My breakfast naivete was showing, because it never occurred to me that fish and grits could be a thing, even though I’m a lifelong shrimp and grits fan. The saltiness of the catfish almost melted into the grits. The pairing was lovely. I’ll definitely be back to Sassafrass and I’ll bring other snobs who’d normally avoid a Gentilly strip mall.
9.5/10 Blockbuster Videos

Ruby Slipper (multiple locations)
Look, here’s the thing: I’ve eaten at Ruby Slipper dozens of times, but why? I’ve never had a good meal there. It’s mostly mediocre, but I think what keeps me coming back is the inverse of the strip mall phenomena. For the most part, Ruby Slippers are housed in these cute buildings nestled inside neighborhoods. The one in the Marigny is inside an old Canal Commercial Trust and Savings Bank, which is this gorgeous 1920s brick and granite building located literally across the street from Tom Waits’ apartment in Jim Jarmusch’s 1986 film, Down By Law. Which, hey, is a good reason to go there. You can impress friends by pointing out that John Lurie, Ellen Barkin, and Roberto Benigni were hipstering it up on this block 30 years ago. The Ruby Slipper in Mid- City is inside a rather impressive early 20th century Spanish Colonial stucco grocery store. The rumor around the neighborhood is that this one is closing soon to make way for a bigger, badder Broad Street location—although still in a historic building (these folks know what they’re doing). My point is, I’ve gone—again and again—to Ruby Slipper because it’s charming in a way that Sassafrass, which has far better food, simply isn’t. But this is a food review, right? So let’s talk about the last thing I ate there (ever—because this month has convinced me that I don’t need to settle for this): the Chicken St. Charles. It’s fried chicken served on a biscuit with poached eggs and a tasso cream sauce. Doesn’t that sound great? The chicken was fine, the eggs were what you’d expect, the biscuit was dry (which isn’t great but OK), whatever. The tasso cream sauce was where things took a hard left turn. It was suspiciously gritty, sour, and horrible. I even asked the waiter if maybe something was wrong with it. The manager went to the kitchen and reported back that it tasted normal to him. I left the meal untouched and haven’t looked back. Even the meals I’ve had there that were OK—the Migas, the Costa Rican, the BBQ shrimp and grits— have yet to blow me out of the water.
5/10 Jim Jarmusch films

The special was a pancake/whipped cream/sprinkle thing that was supposed to look like the Superdome, but resembled a Mardi Gras-themed UFO instead.

Betsy’s Pancake House (2542 Canal St.)
Betsy’s is one of those storied New Orleans spots. It feels like you’re in a small town diner instead of the middle of the city. It’s cute and appealingly ‘80s: there’s the neon sign affixed to, what I think, is an aluminum awning, bright turquoise walls, hotel room Berber carpeting, and somewhat sparse Who Dat memorabilia decorating the walls. Betsy’s oozes a certain authenticity which makes it charming in a completely different way than Ruby Slipper. There’s no pretense about either the decor or the food, which is adequate, if nothing special. The pancakes are huge. I happened to go on a game day when the special was a pancake/whipped cream/sprinkle thing that was supposed to look like the Superdome, but resembled a Mardi Gras-themed UFO instead. Look, Betsy’s food isn’t great but I recommend ordering the biscuits and gravy with a side of fried chicken (also, it had dawned on me that I apparently really like fried chicken for breakfast and I vowed not to do it again for my last two restaurant visits—much to my chagrin). It’s fine, it’s really cheap… You could do worse.
6.5/10 UFOs

Toast (5433 Laurel St.)
I can’t believe they managed to cram a whole restaurant in the old Laurel Street Bakery location. It’s so tiny! When I first heard that something had moved in, I assumed they’d overtaken the Judo studio next door; but no, it seems like Toast managed to just fit themselves in there. The result is cute and cozy and definitely veers close to the Ruby Slipper brand of charm. For our table, we ordered the aebleskivers with lemon curd. The aebleskivers were a completely new food item for me, so I was super excited to try them. They’re puffed pancakes that resemble bath bombs, served with your choice of sauce, and were the clear winner of the day (and of this month in general). They were soft, sweet, and perfect. How did they get the pancakes to cook through in this strange ball form? I don’t know! The lemon curd was tart and the perfect accompaniment, although in the future I think I’ll pay a bit extra and order lemon curd and nutella and mix them up! Also, in the future, I’ll just order the aebleskivers and some bacon and forego everything else because nothing else was great. I ordered a crepe and my dining companion ordered the biscuits and gravy so that I could do a direct comparison with Betsy’s. I had the mushroom, spinach, onion, pepper, and goat cheese crepe which was exceptionally boring. The crepe was as thick as a tortilla and the fillings managed to barely taste like their component parts. It wasn’t disgusting but it wasn’t good either. No thanks. The biscuits and gravy were likewise totally bland. Neither the crepe nor the biscuits and gravy actually tasted like anything; what’s going on here? Rating this one was hard because I’d give a 10/10 for the aebleskivers and only 5/10 for everything else. So I guess I’ll average it out.
7.5/10 Strange Ball Forms

Anita’s Grill (2122 Tulane Ave.)
Anita’s, much like Betsy’s, is really a classic barebones diner. There’s a long wraparound diner counter—which is fun to sit at if you want to watch your food being made—and several booths lining the walls. The building proclaims that they’re open 24 hours, but they aren’t, which is kind of weird. Y’all know I wanted to get the chicken and waffles but I’d already vowed not to, so I ordered a classic: pancakes, eggs, bacon. The pancakes were these massive fat cakey things that were cooked in so much oil they were basically deep fried. Tasty! As for the bacon and eggs, well, if you’ve ever eaten scrambled eggs and bacon, you know what they tasted like. Anita’s was good: cheap and filling. I still think if you want to eat breakfast, you could probably just make it at home, but if you want to go somewhere and have a classic meal, you should try Anita’s.
8/10 Classics