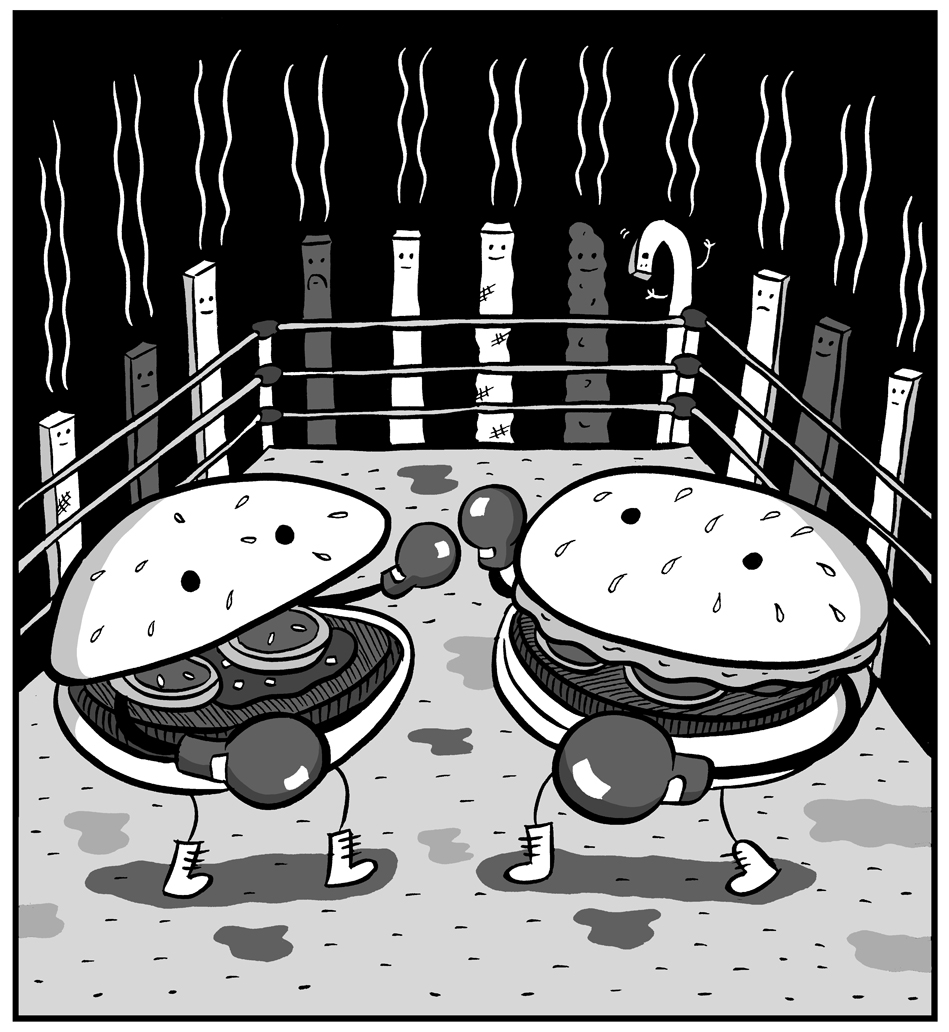 I love trashy junk food, but which one is the best? To find out, I decided to do the ultimate fast food face off, cheeseburger-and-fries style. Who will emerge the victor? Note: I know that some fast food chains will allow you to have things “your way,” or make changes/additions. For the purpose of this investigation, I ate these cheeseburgers however they come standard.

McDonald’s
I have a long and storied history with McDonald’s, so I knew what to expect with this one: the basic cheeseburger comes with chopped up onions, pickles, ketchup, and a very sweet bun. Indeed, this was the sweetest burger I had anywhere—it’s like dessert with a thin strip of meat. After eating at seven other spots, I would venture to say that their cheeseburger tastes literally nothing like a cheeseburger per se, but it’s still oddly and extremely comforting. One bite and I’m sucked through a portal into the past: I’m four years old, cuddling a Hamburglar doll, about to have a slice of Grimace birthday cake. McDonald’s really banks on our own collective familiarity with their product. I can’t imagine trying this for the first time as an adult and enjoying it. It’s just kind of odd. But as an adult who has been eating these things for three decades, I still like it. The fries—when hot—are excellent, but total garbage after about ten minutes. Why?

Burger King
As you may have surmised from my screed above, my family was a strict McDonald’s family. We never ate Burger King, and as an adult, I haven’t really strayed from that. I was pleased to see this burger came with a sesame seed bun—fancy! It also came with ketchup, mustard, and pickles, which is good because I’m not an onion person, necessarily. I understand their purpose in cooked dishes, but I’m not one to put raw onions in a salad randomly. Anyway, this burger tasted way more like an actual burger than McDonald’s. Is that “flame broiled” claim true? I don’t know. The fries are rectangular tubes, which is such a weird shape. They were OK, but no match for the (admittedly temporally-dependant) majesty of McDonald’s fries. I’m kind of torn about the King; they lack the nostalgia factor for me, but their burger was undeniably superior (if you’re looking for an actual burger).

Wendy’s
Wendy’s has an intriguing menu, and one that makes me suspicious that burgers are not their focus. This suspicion was borne out by my tasting, because the cheeseburger was very dry and the bun was tough. It came with pickles, red onions, and ketchup, but none of that helped. This was easily the worst burger I had anywhere. The fries were also a letdown. How do they go into the bag soggy?! No thanks, Wendy. Never again—well, unless I want a Frosty, because those are always delicious.

Rally’s
Rally’s is known for having the best fries in the fast food game, but I wasn’t sure if their burger would be able to hold its own. Well, it does! Their cheeseburger comes with lettuce, tomato, pickles, red onion, ketchup, mustard, and mayonnaise. The meat on this one is actually seasoned—it tastes like salt and meat, instead of just meat—and it’s nice to see lettuce on a drive-thru burger. It didn’t taste fresh, necessarily, but it did taste just fine. The fries, as per usual, were excellent. What is that seasoning they use? So good.

Atomic Burger is a relative newcomer to the game and I was excited to see how they’d fare. Their cheeseburger comes with pickles, tomato, onion, lettuce, mustard, and mayonnaise. Lettuce! Who knew it was such a rarity in the burger world? Anyway, this burger was very good. It was well seasoned and the bun tasted fresh, as did the lettuce, onion, and tomato. I ended up picking off most of the onion, as there was quite a lot, but this was a seriously good burger. It definitely tastes like it came from an actual restaurant, which is something I didn’t really think about before doing this investigation. It’s a legit delicious, fancy-tasting burger. The fries, however, were soggy right out of the gate, and way too big, which is disappointing. Not even the garlic aioli dipping sauce could help.

Y’all, people really love Five Guys. I remember how totally stoked folks were when they announced they were opening one here. I went back then, and I was like, “Ehhh, I don’t know.” But I have an open mind and an open heart, so I decided to give them another shot. And this time, I thought it was OK. It isn’t the best burger, but it’s not bad. Their standard toppings are mayonnaise, lettuce, pickles, tomatoes, grilled onions, grilled mushrooms, ketchup, and mustard. In my opinion, that’s just too much! The grilled onions and grilled mushrooms just made the bottom of the sesame seed bun soggy, and the whole thing fell apart about three quarters of the way through. The meat was completely unseasoned, which at this point, I’m no longer surprised by. The fries were very greasy, but also better than most, so I can’t complain. I’m sort of torn because Five Guys did taste quite fresh and really, it’s a fine burger—but I just didn’t love it and I’m not sure why.

Lee’s Hamburgers
Lee’s is one of those local institutions that I’d never been to before or really even had any interest in. Well, you know what? I was wrong, because this was awesome. Their cheeseburger came with lettuce, mustard, ketchup, mayo, shredded cheese (WHAAAAA???), and onions grilled into the meat. This was definitely the most homemade-tasting burger I’d tried anywhere, and I’d guess it’s because of the onions in the meat (which is how burgers were made at my house growing up). The fries were bleh. Also, the cashier pressured me into getting a large fry, even though I’d ordered the small (hey, I was about to drive to another place and eat another burger and fries, so I was trying to be conservative!) And yeah, I didn’t need the large.

Bud’s Broiler
One of my old bosses years ago would go to Bud’s literally every day for lunch, so the first burger I ever had from them was at a work function. I remembered liking it, but couldn’t really remember much else. Their burger comes with onion, mustard, a little too much mayo, and shredded cheese (is this a local thing I just never knew about?) First things first: this burger is smoky! It’s definitely the closest thing you’re going to find to a “made by your uncle who always wears white sneakers with socks” burger, without actually having to go to your family reunion in City Park. There was definitely too much mayonnaise for my taste, but since I know that, I can just tell them to hold off on that in the future. And while I definitely applaud Lee’s for the addition of lettuce, something about the “your dad made this on the grill” taste of this burger makes Bud’s absence of lettuce make sense. Also, the music at Bud’s was excellent, assuming you’re a fan of those Lowrider Oldies compilations. The fries were very tubular, but not the most delicious, sadly.

Winner: TIE! These are both really good.