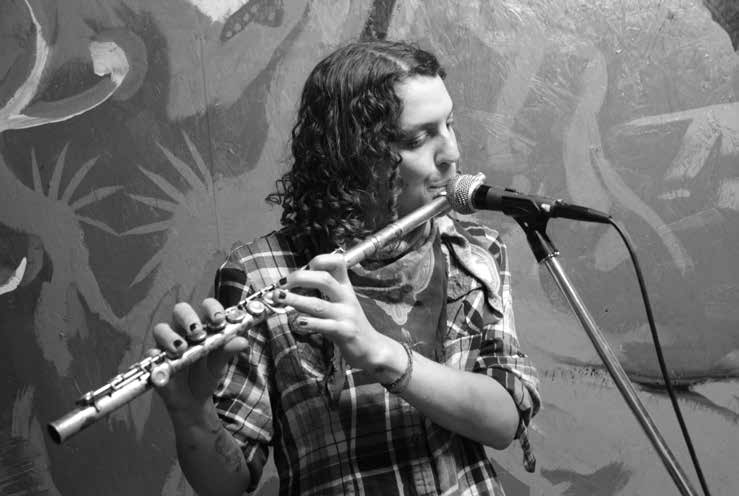 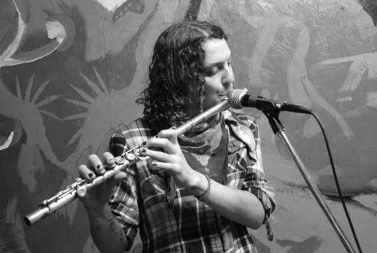 I tell Vanessa Degrassi, the singer-songwriter behind the band de lune déluge, that their debut album Honeycomb dabbles in the flirtatious and dreamy sound of Van Morrison’s Astral Weeks (which, full disclosure, is my desert island record). “I’ve never heard it before,” she says, half-guilty and totally genuine. It turns out they aren’t a bunch of music nerds geeking out to Van Morrison like me. But I press on about the sound of the new album because I’m trying to understand their style, not easily categorized. Regardless, de lune déluge has a meditative aesthetic: it’s based on a moment-to-moment structure of practice and theory that creates a very personal sound.

After mixing their initial EP, Figmilk of Your Imagination—while on tour—de lune déluge wanted a cleaner sound on their first proper album, as opposed to the more rushed effort on the EP, which drummer Collin Jilbert describes as “dry and straight-forward.” Their new album is wonderfully clean; it almost sounds like it was recorded in a vacuum. Thanks to the Living Room Studio and Ross Farbe, they were able to use quality equipment, talented engineers, and not-so-invasive microphone set-ups, allowing them the freedom to groove. The band recorded live to tape on drums, bass, and guitar at the Living Room, and conducted overdubbing and mixing at Farbe’s studio, dubbed The Thermos. “I have a rack mount spring reverb unit from the ‘80s that we ended up using quite a bit on these recordings,” says Farbe about the production process for Honeycomb. “It has a really long, dark trail and fit well with Vanessa’s voice. We also put a lot of instrument sounds through the spring.” I got to sit in during one practice session and observe their creative process as they prep for a show and work out new songs. The band is a three-piece: Vanessa on guitar (and occasionally flute), Collin on drums, and Dustin Champagne on bass. Vanessa plays by ear, mainly inspired by what she hears or feels; Collin is theory-based and plays grooves ranging from jazz to punk drum patterns. Dustin plays molasses-thick bass lines.

Their practice regimen starts with a 10 minute warm-up jam to get what Vanessa calls their “vibe” or “headspace.” Collin alternatively calls it “getting our glue mixture going.” After that, they work on existing songs in chunks if they’re figuring out a setlist. But they like to keep things fresh, too. They might create a new intro for “Draught,” one of the songs on Honeycomb, that features looped flute and a different drumming pattern. Vanessa sings a melody that hearkens “Zombie” by The Cranberries, and she might start off a song soft and pillowy and end it with some distorted noise. This kind of freedom is what makes their shows fun to watch. You can’t be sure what they’ll do next, because they aren’t so sure either.

Regarding the bass, Dustin says, “I play a Fender American standard jazz bass. I choose the j-bass because it’s a timeless classic with a nice bright, but flexible tone and a smooth action. The weight distribution is nice [since] the neck doesn’t want to fall to the floor when wearing it on a strap.” Since Dustin is a pretty bare-bones player, he doesn’t use any pedals or effects. This makes his amp choice all the more important: “As for the amp, when playing live I usually play through an Ampeg 100 watt combo. I like Ampeg for its unique, almost tube-ish tone that sounds good with most bass guitars. They do well with a bright or warm tone and most importantly, they are built to last.”

Vanessa’s Fender Strat gives her the precision that she seeks in a guitar: “It took a while to get used to after playing a Les Paul, but I like how responsive it is to my finger-picking. And it distorts easily.” She runs the guitar through a Peavey Classic 30, which gives her cozy, warm, evocative tones. She uses a range of pedals for various effects: Boss DD -7 (she calls the delay on it “ethereal”), Electro-Harmonix Holy Grail Reverb (“the hall setting is great”), Boss Overdrive/Distortion (“fluid”), and Boss Tremolo (“lots of options”). But most interesting, regarding her pedal choices, is the one that she uses for vocals: a Line 6 DL4 delay. “I love singing with delays and using the loop setting so that the vocals run into each other at different times and maybe sound a little dissonant when they sync up in different spots.” 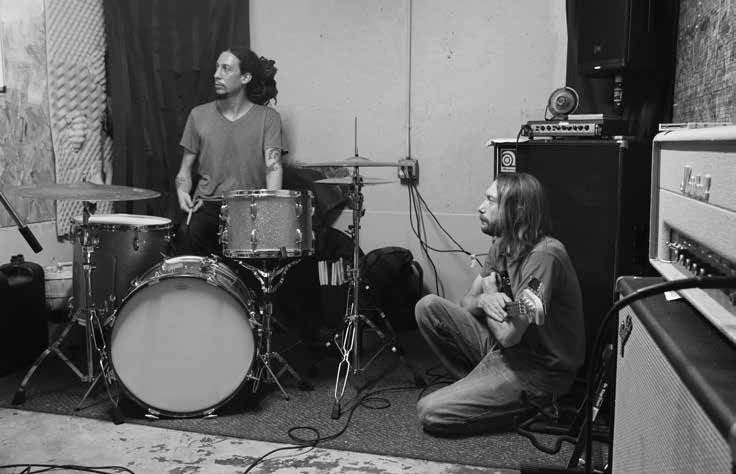 Collin has a pretty clear, and dear, relationship with his drum set, whether it’s the one he records with or the one he uses live. “When we were recording the album, I got to use a beautiful 1960s Gretsch Round Badge kit,” Collin notes. “As soon as I walked in the studio, I saw this kit stacked against the wall and knew I wanted to play it. I’m a huge jazz fan, especially the bop era, and probably my favorite drummer ever, Max Roach, played similar Gretsch drums. So for me it was great to be able to play on it, and I think it helped give me an added energy and thought to my playing while we were tracking.” And Collin is really sensitive to how the specifications of his instrument affect his sound. “I used two different snares on the album for different songs. Both were old Ludwigs and if I remember correctly, one was wood and the other was a metal snare. You can definitely hear the difference on the record. The metal snare was tuned up high and had a nice crispness and snap to it, perfect for a lot of the more jazzy type of things that I play.”

The eclectic drummer also had some thoughts on his cymbals. “I used some vintage Zildjian 14-inch thin hi-hats, a Sabian 22-inch Omni ride cymbal, which had a lot of stick definition. [That’s] just what I was looking for to use on the record because that articulation of the stick is very important with the jazzy type stuff. It was also a really thin ride, which was nice because I could crash on it, and it wasn’t harsh-sounding. My main crash cymbal was my own crash that I always use live, which is a Meinl 18” extra-dry, thin crash. I absolutely love that cymbal: it has a trashy and super-dry sound to it. It gets out of the way fast (short sustain), and it offers a contrasting sound from the main ride cymbal when I ride on it.”

They all operate under a plethora of influences, which I can hear while watching them play: The Go-Betweens, R.E.M., Lush, Elliott Smith, The La’s. They have the smoky aesthetic and cooing vocals of the greatest alt-rock ‘90s bands, without any of the cynicism. But there are also notes of Neil Young, Velvet Underground, and Joni Mitchell. And it’s really nice not to be able to pin their music down so easily. Their songs breathe in a way that allows them to live however they may: one version on a recording, another at practice, and a totally different take at their next show.

Honeycomb, de lune déluge’s debut album, will be available April 22 with a release show Friday, May 6 at Saturn Bar, Trance Farmers and Toonces opening. For more info, check out delunedeluge.com