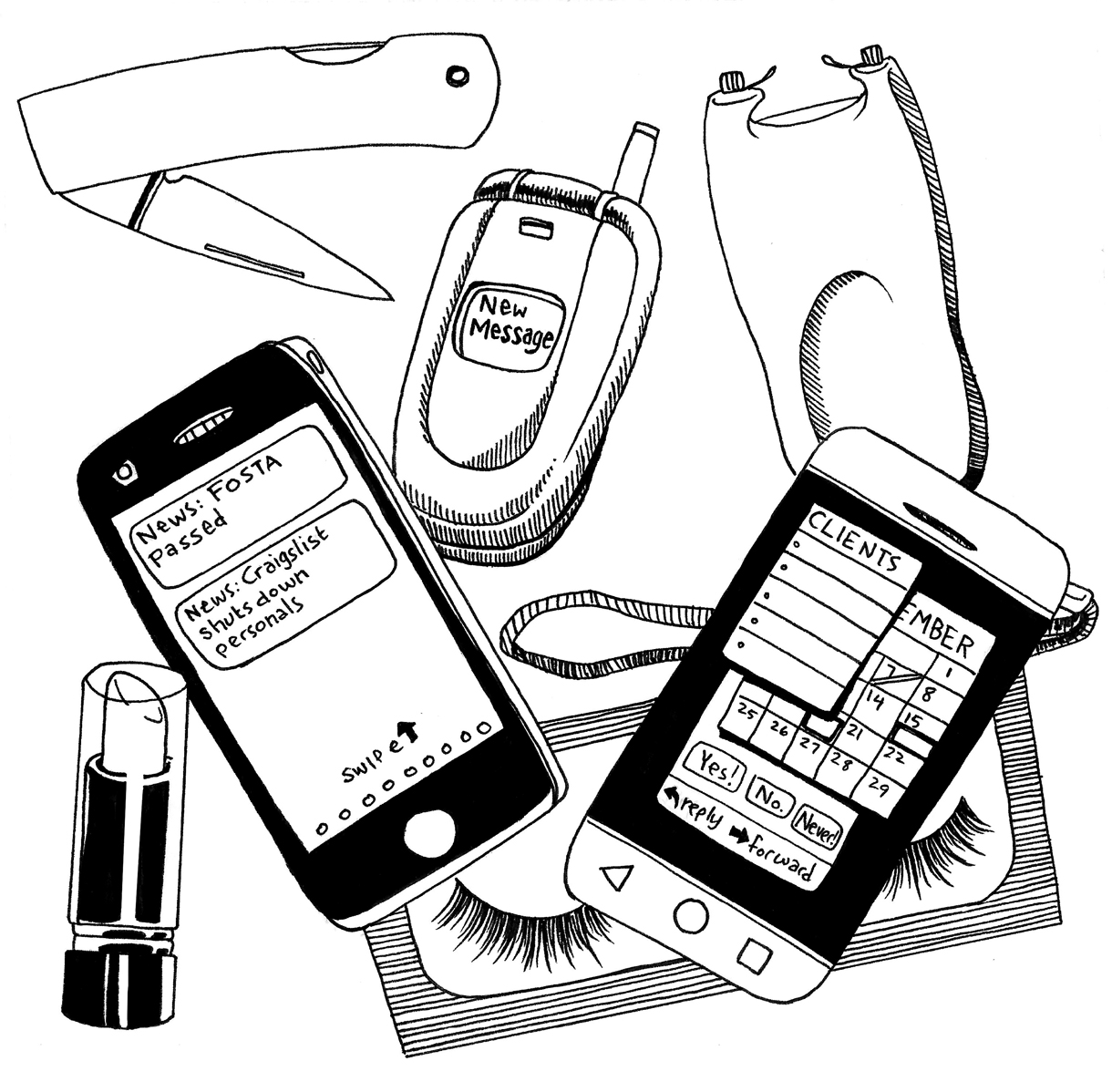 The declaration that #sexworkiswork is all over Twitter and Instagram, on stickers and t-shirts. It’s certainly on my mind, though not as an exclamation. It emanates, rather, from my sprained ankle, or from my rolling eyes as I navigate my ever-growing mess of an online presence.

Criminalized work in the digital age will spin you out. Multiple identities, accounts on five different platforms, emails, searching phone numbers of would-be clients, screening clients, sharing info about violent clients and time wasters, keeping a second phone in service, tax evasion… It’s hard fucking work. #Sexworkiswork is a necessary call to make visible the substance of what we do, so that we may move towards control of that substance.

The work of sex has become obvious to me. I create content, stories, pleasure, ultimatums, comfort. I extract something of us and of this world to create the perfect iteration of love and lust for my customer. Sex, of course, is not separate from life; it is always at work in how we interact with the world and each other through economies of desire and through gender dynamics. The blockage so many people have to realizing this reminds me of how I feel about the Internet.

The Internet has always filled me with dread, frustration, and confusion. It has prompted more self-loathing than most mistakes or indulgences offline. When I am being reactionary, I want the Internet to be an entity that has nothing to do with me, though in reality it is included in every aspect of my life: to communicate, to obtain commodities, to learn how to use those commodities, for transportation, to watch videos of riots, to use for my work. Even a prisoner with limited or no access to the Internet is not removed from its totalizing grip on all planes of life, as imprisoned people receive money for their commissaries, earn rare email privileges, or have their identities solidified in an online database.

Computer programmers, like sex workers, are the intentional makers of what is perceived as unknown and inaccessible magic. In reality, this apparition is born only of our failure to understand the worker as one who embodies a technical mastery of a specific sphere of production. Imagine if those who write regulations were moved to fully understand the specificities of our work. Conversations might lead to the abolishing of patriarchal control instead of the criminalization of poor people who get tricked into giving a cop a blow job. If sex work was understood through the firsthand accounts and demands of sex workers ourselves, we would be significantly safer. In fact, on average, when Craigslist opened an erotic services page for a new city, the female homicide rate went down 17%, as revealed in a 2017 study by economist Scott Cunningham. Yet these pages have been shut down. 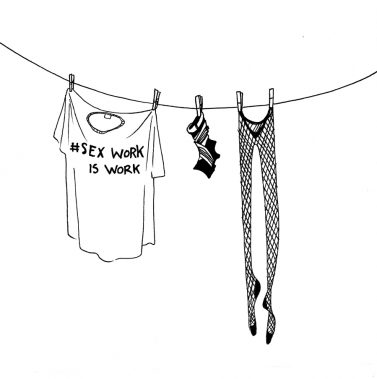 FOSTA (Fight Online Sex Trafficking Act), a bill recently passed by Congress, is a blatant example of state regulations based in moral declaration coupled with disregard for the personal agency of people it claims to protect. This bill uses a deceptively noble title to roll back safe harbor provisions provided by the Communications Decency Act of 1996, meaning that online platforms can now be held responsible for the content generated by their users both in private lawsuits and in criminal court. FOSTA itself does not directly prosecute sex workers, but instead uses the threat of incarceration or massive fines to pressure online communities into censoring their users. Since FOSTA’s passage, sex workers have lost the self-made online tools and practices which allowed us to dictate the terms of our workplace and move towards autonomous protection and collective power. Through forums for tips, lists of abusers, or advertising which asks for client screening, we became less isolated and safer–literally less likely to be murdered.

We cannot allow anything to become the exclusive terrain of elite experts, another tool of the state to control and capture us, another mechanism of fear and submission. The Internet doesn’t belong to anyone. It is a completely decentralized system, similar to the rest of the world, in that it becomes what people contribute to it. There are free and open-source coders, there are content creators such as cam girls and radical news sources, and there are companies who commodify the Internet. The government wants us to believe that they have the ability to control how and why the Internet is used. Yes, the Internet is surveilled, partially funded, and regulated by the state. But like much else under hierarchical power structures like capitalism, the state’s control is not technical—it is through fear and commodification that this control is gained. The government may fund it, and corporations may own the material infrastructure of the Internet, but we make it. Our knowledge is the wealth of the working world, and we are dangerous because of that. Someone who knows how to make a system operate also knows how to sabotage it in an effective way or manipulate its functions to serve revolutionary ends. The collective force of sex workers and computer programmers links together skills and techniques that could be shaped into something other than systems of government. A programmer recently reminded me that the Internet works best when it is ungovernable.

Maintaining a secure internet presence is an important way to be an accomplice to sex workers. Everyone should take care to not expose their friends or colleagues to harm. An attempt to understand forces at play in our lives is an essential gesture of being part of a revolutionary force. The fight against the surveillance state is not born out of the issue of having “something to hide.” It is a fight for the world we could create if we weren’t being annihilated by multiple regulatory bodies to whom we are voiceless, excess bodies in a failing system. Between mistakes and panics I have set out to understand the Internet more fully, to use it just as I would any public space—to live, to thrive, to meet, to get what I want. Here are some basic tenets I have learned along the way:

For recommended reading and skill exchanges, email me from your new ProtonMail account at trickinghour@protonmail.com