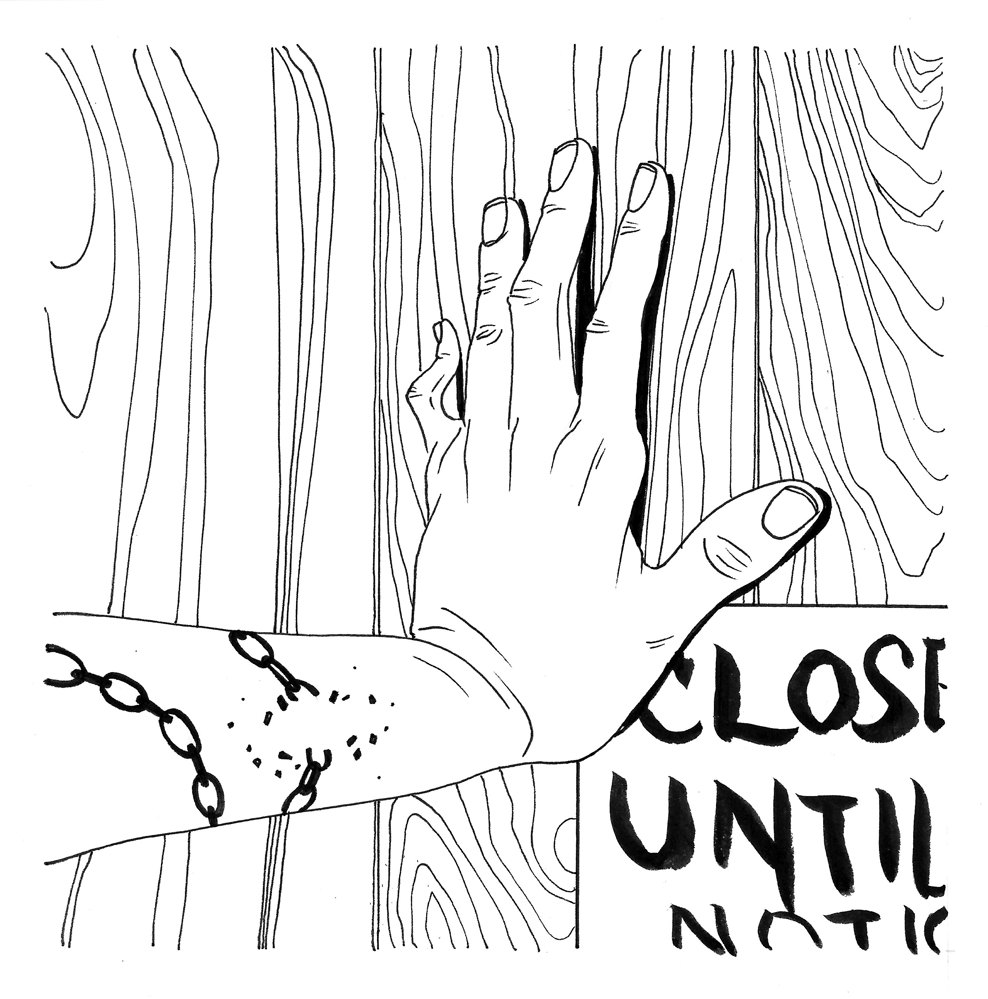 I have not been working nights for a few weeks, yet I still cannot sleep. I find myself awake, entangled in my sheets, rolling with the anxious, cyclical thoughts in my head. When I open my eyes, sometimes my hand is pressed up against the wall as if I am pushing my way out of something. Half of this dialogue is talking myself down. This is a time to rest, a place that could be safe from my conditioned counter-revolutionary consciousness. The rejection of conventions is a task which works itself out while I idle. My sheep-counting is a slow convincing. I insist—these thoughts cross a clear terrain; memories, traumas, and plans that are a means and an end. I am thinking of my gestures, or maybe our gestures. Stealing, carrying out attacks, working, going on strike. Self-evident gestures that do not need my anxiety to clarify their intentions.

The violence of extortion makes visible the value of labor. I learned this from prison rebels of the racist American plantation system. I am writing this shortly after prisoners all over the world took part in an organized strike from August 21 to September 9, 2018. Their gestures—work refusals, sit-downs, lockdowns, property destruction, retaliation—likely cost the system reliant upon their enslavement millions of dollars. This strike, called for by Jailhouse Lawyers Speak (an incarcerated group of prisoner rights advocates) is a prolonged struggle supported by comrades on the outside in an effort to win harm-reducing reforms, alternatives, and policy changes.

Prison rebels and sex workers inhabit similar corridors. Our labor is widely invisible to the market. We are criminals—meaning we are not able to be workers in legal or social terms. We cannot fit into traditional labor politics, or enjoy the prospect of a union and the legal protections it might provide. We are legally prohibited from communicating with others on our conditions or efforts; and even if we manage to, we are seldom believed and often brutally punished. Under the 13th Amendment, legally enslaved people are still growing our food, servicing my burner phone. Johns who are also cops who are also johns kill sex workers in locked cars*, hunt us down on the United States/Mexico border. Prisoners and sex workers have a shared need to destroy state power. 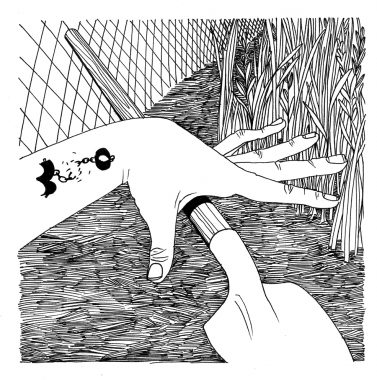 If there is a certain affinity that sex workers share, it is not nebulous, not a sisterhood or “the life;” it is a visceral knowledge of lawmaking’s inherent violence. The rules and regulations that are billed as heroic protective measures create a deep strain in my chest, the same chest which is not mine at all—not mine to touch on a strip club stage, not mine to sell. What violence do we need to engage in to escape the expansive partnership of the making of law and that which conserves it?

Becoming a sex worker entails exposure to the exchange value of sex. We are already refusing the convention of the unrecognized, unquantified, and unlimited nature of the work of women. We make visible our labor value, and we make it apparent to those who seek our labor. More smiles? More money. There is a moment of satisfaction in this process that only sex workers truly know, though there is also a hollow solitude that we face on the other side of refusal. I cannot realize myself through work. I am simply provoking. How to escalate this provocation? How to induce a current out of these anxieties that could lead to a different reality, one characterized by (as Foucault theorized in The History of Sexuality) “sex without law, and power without kings”?

The strip clubs on Bourbon Street become less and less tenable. We arrive to work to find our clubs closed without warning. How dare we feel stable, comfortable? Always have your bags packed; remember no one cares about you. The pang of stripper realities whip back around just as you let your hair down. It is when we are openly strategic and intelligent that we risk our livelihoods: strippers fight the City Council to keep the clubs open and then have our contracts terminated for daring to approach a position of agency or solidarity. Organizing is only tolerated when it is in line with corporate interests.

Prisoners and sex workers have a shared need to destroy state power.

Like most workers, strippers have a long list of grievances: Contracts that keep us in a state of precarity, unsafe working conditions, busted equipment, the club making more from services than the providers ourselves, reducing our tips, house fees, discrimination by weight, age, race, and tattoos, “attitude,” “appearance,” pregnancy as grounds for firing someone, termination, cutting locks from personal lockers, bag searches, clubs sending in their own undercover “mystery shoppers,” colluding with law enforcement.

The precarity and transience of our industry necessitates cross-club and even cross-city lines of affinity in order to create leverage with our demands. Our organizing on Bourbon street included hard lines against the police and positions against gentrification and sanitization of our city, against a City Council that both dehumanizes and disregards our right to body autonomy, and against the attempts by the state, the Covenant House, and journalists to turn strippers and other Bourbon Street workers against street-based sex workers. We must continue to show up against brutality and coercion as shown in the raids of strip clubs on Bourbon Street and in New Orleans East, and the subsequent conduct of club owners who throw us under the bus to shift blame away from their own ineptitude.

There is a certain plowing of the sea in all these thoughts that herald my sleepless nights. We need a gesture that transcends small talk; we need to strike; we need to consider all the risks and shift our dependence on sex for our basic necessities to each other. Housing, food, childcare, our social lives—how do we reach common availability of basic needs, so that we feel stable enough to pull through something like a work stoppage? The state and anti-sex work feminists would like us to believe that we have made our own conditions, that our criticisms of the industry persist because of our inaction. We must also refuse a victory defined by adapting to the world, to their world.

My hand against the wall—is it for stability, in defense? It is not a reaction of fear for myself. It is a consideration of what is at stake. It is fear for comrades on the inside being put into solitary confinement for the content of their letters, for organizing. Fear for sex workers barely scraping by. One of the few truths I know is that we want to protect each other in an immediate way. The difficulty is in knowing that increased compensation will not destroy each apparatus of control, but only bind us tighter in dependence on them. It is not different, better work that I seek, and it is not rehabilitation. I am often at a loss, gagging when I honestly agree with many coworkers that stripping has at times been the only constant in my life. We enter through the club doors as our favored option for financial autonomy. What prevents us from being as resolute in regards to our working conditions as we are with a customer? Following the boldness of the prison rebel, I want to discover how to act despite isolation, violence, and constant surveillance, how to insist on a better life.

I need to think towards another gesture. Not the extortion of demands made against my manager, but a vision of my work without the labor relation. How do we use our bodies, each other, animals, objects in the world, without making claims of possession over them? How do we take our refusal so seriously that we do not return to business as usual—ever? No, not even off the job. A universal, permanent sex strike which is either species suicide or the end of gender itself? A refusal to be specific instruments, a refusal to be women, which will always entail the gender relation in which labor is carried out. A refusal of the abstraction of law. Sex without labor.

*We dedicate this column to the memory of Donna Castleberry Dalton, a 23-year-old mother of two, who was murdered as our last issue was going to print. She was shot eight times point blank by Officer Andrew Mitchell of the Columbus, OH police, within his undercover squad car, in an encounter wherein he had pinned his locks so she could not escape. On our minds also are Melissa Ramirez, Claudine Anne Luera, Ricky Janelle Ortiz, and Guiselda Alicia Hernandez, whose lives were stolen by Border Patrol agent/confessed serial killer Juan David Ortiz. May their memories be a blessing. May they Rise in Power.