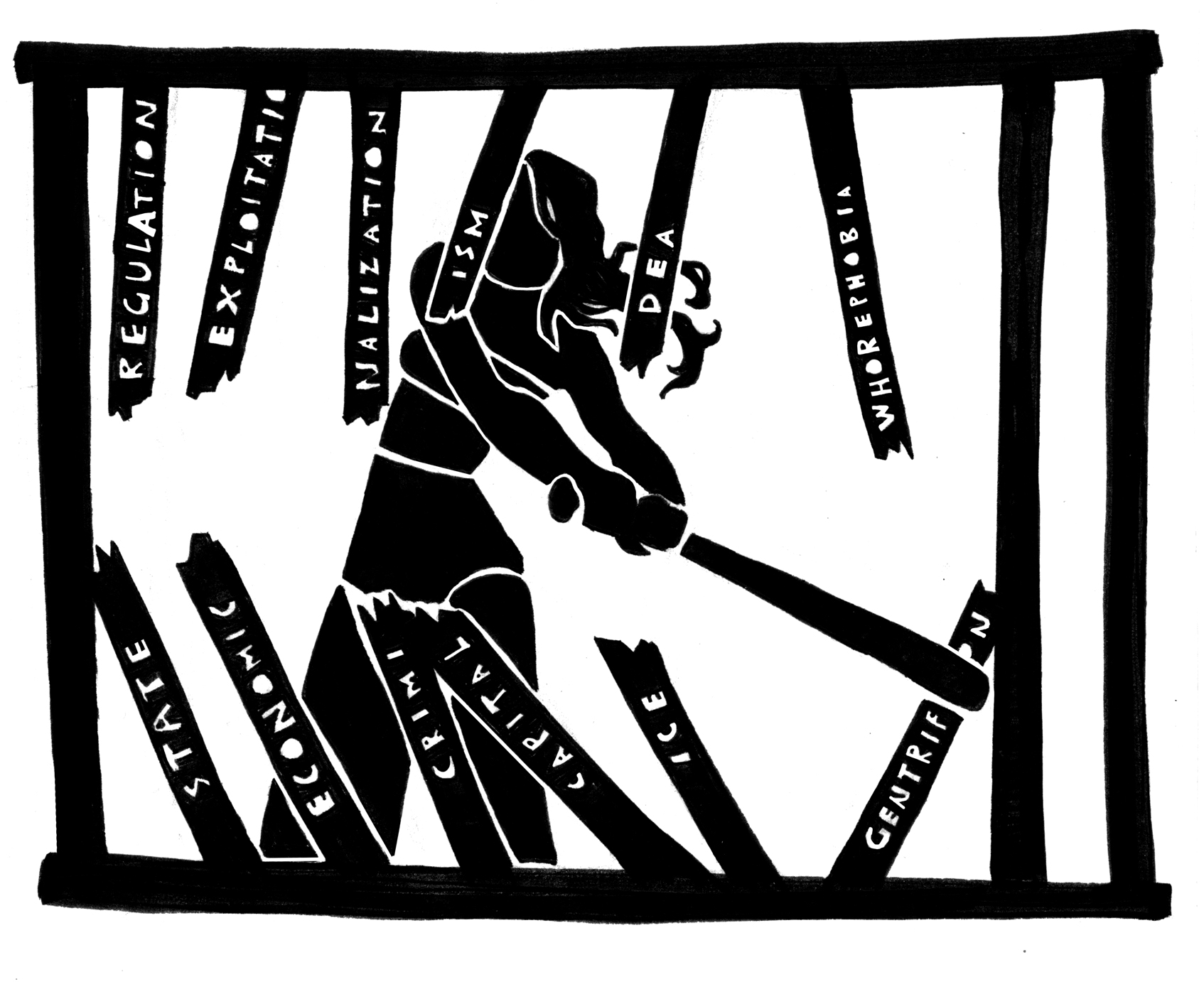 On June 2, 1975 over 100 prostitutes occupied the Saint-Nizier church in Lyon, France to demand the end of fines, strike back against police violence, and demand the release of ten sex workers imprisoned for soliciting. This occupation is commemorated for its fervor to end stigma and demand better work conditions each June as International Whore’s Day. This month, I am passing along a text written by sex workers in a clandestine whore’s network. It is a call to the militant spirit of the occupation in Lyon. It is also a response to the lack of anti-state and anti-work discourse in sex worker organizing. We will all be punished for gaining autonomy from the state until the state no longer exists. Our wager is that truly autonomous sex worker organizing is integral to an anti-capitalist revolutionary horizon.

Right now, we are a handful of whores attempting to put our position into words and our words into action. In the time we have been in the sex trade we have seen and learned a lot. We have witnessed the shift towards strong identification with the term “sex worker” and even pride in the labor of selling sex. We have seen platforms flourish for sex workers to find work or to find each other and develop communities. We have seen less shaming and less fear of being judged in radical circles, and even the development of a niche popularity that celebrates sex work as a more desirable option amongst relatively few or less desirable options.

Although many of these changes are beneficial, they are not without criticism: whorephobia is still the pervasive view of sex work within society as a whole, especially if you are poor, working class, Black or brown, or trans. The whorearchy amongst sex workers continues to reinforce this trend, as stripper chic and other forms of non-sex service providers place themselves above other workers who fuck for a living. We see white cis women who have built marketable personas with relative ease as high-class escorts or sugar babies, take the spotlight as voices for the sex worker movement with open admission about their lives, while others are left concealing their every move, leading high-risk double lives. We have seen an expansive activist and online community turn into a demand for recognition and protection by the state, for legislation and elections to lead the way to “liberation.”

We do not believe our liberation will be reached through a permanent position within capital, to then be exploited in more efficient ways. We do not want to be legalized. The regulating role of the state will always include policing workers on the job and off-work, and prosecuting criminal activity in all aspects of workers’ lives. Work is not something that confines us solely as we labor in a building or room. Work orders the rest of our life: our mornings, our vacations, our purchases, what we read, our care, our sex and pleasure, our home, the night. The more legitimized our labor becomes by the state and capital, the more we are forced to work. We want an end to criminalization, an end to work, and also an end to capitalism altogether.

A narrowed and flattened lens into headlines such as “Eight foreign nationals freed from sex-ring-massage-parlors in Berkeley” can only illuminate what one is already able to understand of the complex components of this “sex ring.” Immigration, inability to find work, racism and misogyny are all factors at play in governances’ so-called victories against human trafficking. Raided strip clubs and massage parlors turn into Airbnbs. Every strip club’s “if you see something say something” anti-trafficking posters suggest we dial 1-800-XXX-X-ICE. These are not heroic efforts to save “vulnerable women,” but methodical avenues of gentrification, capital development and ultimately, violence against sex workers and their loved ones.

We cannot wager on the acceptance of sex work, or for those who are obsessed with our condition to change our realities. The anti-human-trafficking movement (a multi-million-dollar industry) is a macro-aggression waged by every arm of the state and its collaborators: NGOs, religious organizations, racist and authoritarian feminists, ignorant or opportunistic do-gooders. It thrives off modernity’s humanitarian lust to save the young and vulnerable, shaped by decades of unearthing—and consequential sensationalizing—of global capitalist horrors. We think of its lethal predecessor, the war on drugs. In these spectacular wars, we witness the unification of both the left and right wings of the capitalist state who, together, design these mechanisms of control in order to extract wealth from vulnerable populations just finding ways to get by. The savior brigades, the Drug Enforcement Agency, the whole carceral system, negate the possibility within informal economies to escape poverty and degradation.

If the challenge was to force our representatives to recognize our humanity, we would be front row at all the city council meetings. But we know their wealth depends on controlling us. Their role is to bring us back into their world, when we have spent our lives creating our own against all odds. To wait until our suffering is recognized through constructing audible narratives for our enemy’s consumption is to take away the power that already exists in our history of struggle.

We are against both economic exploitation and state regulation of economic exploitation. Because of this, we are necessarily for our own autonomy. This is something we must develop together. Let’s evaluate the limits of reform and assimilation while honoring the legacies of sex worker struggles, and move beyond more institutionalized sex worker activism.

We would like to prompt a conversation toward a more thorough understanding of how sex workers, marginalized yet certainly not marginal, can organize material solidarity and care networks that build community while also undermining the state’s ability to hold us hostage in its many ways. We believe being a sex worker is a powerful shared experience wherein our natural inclinations to survive outside of the state’s control and oversight have the potential to manifest incredibly powerful care networks, as well as confrontational responses to those who harm us.

We believe it is crucial to criticize our subjectivity as sex workers and acknowledge that not all who sell sex identify that way. We maintain that our unique experiences, as those with the experience of sex for survival, leaves us—and us alone—capable of recognizing our limitations, traumas, tendencies, and sensibility toward liberatory relations. Beyond misrepresentations, false glamorization, and weaponized stigma, the wisdom and navigation of those who sell sex to live give a critical perspective for the many more who are fighting for freedom from work and from the state.

We acknowledge and honor the hard work, risks, and death endured by many over the past century in order to create a framework for the sex worker-specific organizing and political analysis we use today. The struggle of sex workers and the longevity of our struggle relies on our ability to continue the militant practices of the Black radical tradition, to stand in solidarity with those defending their indigenous land from pipeline development and other state-sanctioned genocidal expansions, and to remember that the hope for queer liberation was fought against the police in a riot at Stonewall by Black and brown trans women, prostitutes, queens, dykes, and other gender traitors. We refuse to let these daring, courageous moments of our legacies be distorted and rewritten into playbooks for passive resistance. Today solidarity means: fight back.