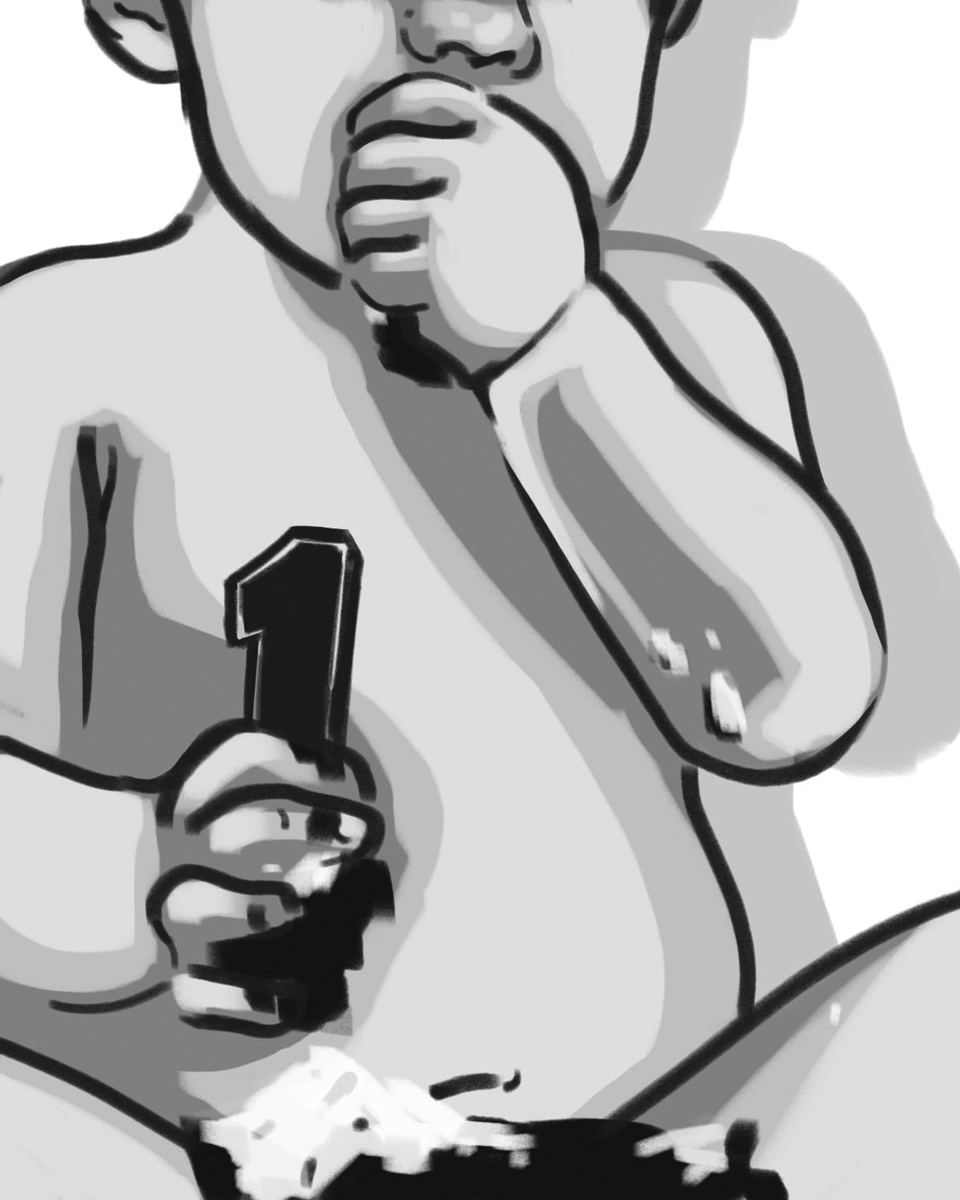 Well, we did it. We managed to keep another human being—a very tiny, helpless one—alive for a full year. On December 8th, we celebrate Emmett’s first birthday. This year has held within it the highest highs and lowest lows of my 34 years. But all the feelings I’ve experienced in 2018, both the transcendent and the miserable, have been rooted in love. This is the year I learned to be a mother. It’s also the one where I had to learn how to live without my father.

My dad’s death was merely the bitter icing on an already rancid cake. His sudden hospitalization came just ten days after Emmett was born, but by that point I was already unraveling. Having endured what ended up being a somewhat traumatic delivery process (holler at the January 2018 “41 Hours of Labor” issue for the full story), I was sure that once I got home with my sweet baby, I would start to “feel” like a mom. Wrong. I didn’t feel like Emmett’s mom. I didn’t feel like anyone’s mom. He felt like a stranger’s kid. I only felt more tired than I had ever been in my entire life, and scared that I had made a colossal mistake in having a child.

What I know now that I didn’t know then is that this isn’t an uncommon experience. Hormones are insanely powerful things and the body’s attempt to self-regulate after pregnancy and delivery can result in some pretty intense—often irrational—emotions. The added complication of my father’s sudden death was enough to push me firmly over the edge and all those feelings of inadequacy were magnified. So many well-meaning people told me that my precious little baby would heal my broken heart and allow me to cope with my father’s death, and I felt like a complete monster for disagreeing.

One day my son may read all the things I’ve written about this time in my life and I worry that he will feel like he wasn’t enough for me. But I hope that he can see that’s not true. That while I had to fight like a wildcat to scratch my way back from the murky depths of depression and anxiety, I did it. And I did it for him. Because he was worth it—every broken hour of sleep, every explosive diaper change, every evening of hours-long bouts of fussiness for no apparent reason. I’d do it all again just to hold his tiny hand in mine and see his little dimpled grin.

So while I may not have felt like mom material at the beginning, I did get there. It took a lot of stumbling and enough tears to fill the Mississippi, not to mention the patience, support, and love of my saint of a husband. But at this point, I can’t imagine myself not being a mother. I can’t imagine myself not being his mother. He didn’t fill the void that was left by my father’s passing. But—as one of my friends who had also experienced the loss of her father told me early on in this journey—my heart created new rooms.

The other main struggle of my first year of motherhood was adjusting to being a work-at-home mom. Don’t get me wrong here—raising a kid is one hell of a hard job. But there’s something very different (and isolating) about not going into an office every day. I’ve had a job since I was 15 years-old. I am the kind of person who craves structure and the satisfying thrill of crossing items off a to-do list. My kid laughs in the face of those needs.

While our days certainly have a framework built around naps and meals, the idea of getting anything done in a timely fashion—including my relatively small amount of freelance writing work and/or any housework—is often out of reach. My mom has a magnet on her fridge that says, “Raising kids is like nailing jello to a tree.” I laughed at it when I first saw it, but I didn’t realize how much I didn’t actually get it. I get it now.

The life of a stay-at-home or work-from-home mom can be very lonely. My kid is freaking great, but he’s not much of a conversationalist. Our chats are mostly one-sided and I spend at least 27% of my day with him mad at me because I made him take something out of his mouth (including, but not limited to: rare vinyl records, bits of trash, the rug, and the dog’s tail). By the time my husband gets home, it often looks like a bomb has gone off in our living room.

I guess I imagined that by the time Emmett celebrated his first birthday, I would have perfected the tightrope act of being an efficient writer, a competent homemaker, a doting wife, and mom of the year. Insert the laugh track here, y’all. I’m not just sitting around staring at the walls or anything, but the days have a way of evaporating out from under me while my to-do list remains untouched.

I never realized how much moms truly do until I became one. And I had a great one growing up. But kids, by nature, are a bit selfish. So I don’t think I ever really saw her for what she was and what all she did until I had to step into those shoes. Most of my day is now composed of things like stacking blocks, singing songs, making nourishing meals, reading a dozen books in a sitting, attempting to wrestle my kid down so I can change his diaper, etc. With the tiny sliver that’s leftover, I am attempting to marshall my brain to produce coherent writing for my clients, keep the laundry going, empty the dishwasher, sweep the floors, tend to the dogs, and actually speak to my husband before I pass out for the night.

I am very grateful that I am able to stay home with my son, but the challenges it brings have been another facet of “mom life” that I wasn’t really ready for. I pour all of myself into my kid all day long, and by the time the sun goes down, I’m spent. I’m physically tired, mentally lacking in motivation, and often totally touched out. Just like all the other bits, it’s a work in progress. I’m grateful to have a very supportive and understanding co-parent and partner in my husband, and as we enter into Emmett’s next year, we will most likely be putting him into part-time daycare in an effort to help him get some socialization and buy me some concrete time for work, household upkeep, and self-care.

YOU ARE THE BEST THING

I’ve talked a lot in this column about how this year has felt for me, what I have gone through, and what I’ve struggled with. But at the end of every day—and especially as we celebrate this momentous birthday—I am in complete and total awe of my son. The strides he has made in his first year amaze me. I hope and pray that we have given him the best start we could, but I also know with every fiber of my being that so much goodness lives within this child.

Our Emmett is sometimes a serious man. He’s a thinker… a contemplator… some might even say a schemer. But he is also a goofball. He laughs at his own farts and does a really spot-on impersonation of both a screech owl and a velociraptor. He is wildly adventurous with just the right amount of cautiousness. He is as mischievous as a little woodland imp. He has double dimples, but you only see the one on the right if he smiles big and wide. Those are hard to earn but oh-so worth it.

He sleeps just like I did as a kid: on his tummy with his hands under his face and his butt straight up in the air. His shoulders are covered in the finest layer of downy blonde hair and his skin is pale like mine, so you can see the network of spidery veins that carry blood back to his tiny heart. It’s a shame we don’t stop more often to realize what miracles we all are. Maybe the world would be less full of hate if we did.

As he grows, I see bits of both myself and my husband in him, but also so many things that are entirely new. I know that people have babies every day. It’s no big deal, right? But we’re a year into this thing and I still haven’t gotten over the fact that we created this little being—that the product of 12 years of love and friendship and trust and commitment is this tiny toddling thing. This person who will grow to have a rich, complex, challenging, beautiful, messy life just like mine.

I imagined that by the time Emmett celebrated his first birthday, I would have perfected the tightrope act of being an efficient writer, a competent homemaker, a doting wife, and mom of the year. Insert the laugh track here, y’all.

It is in those moments that I feel my father’s presence the most. If only he had stuck around long enough for me to tell him how much better I understand now. How I see now why it was hard for him to watch me grow up. Why he still worried about me like I was a pre-teen even though I was 34. Why he texted me when I was in the throes of labor and called me by my childhood nickname. Because Emmett could grow up to be the president and he would still be my little boop man. Just like I will always be my dad’s little worm. I get it now, daddy.

I helped deliver my son into this world. At my midwife’s urging, I reached down and hooked my hands under his tiny shoulders and pulled. I felt that heaviness shift from internal to external. As I held him in my arms that very first time, my first instinct was to hold his hand. Despite a tough and exhausting trip earthside, he gripped my finger with startling strength. He declared himself, in that moment, as a force to be reckoned with.

I didn’t recognize it at the time, but that moment was the end of so many things in my life—parts of myself that I didn’t realize I’d have to give up. But it was also a most glorious beginning. So happy birthday, my precious little boy. It hasn’t been easy or tidy, but you are mine and I am yours, forever. Your dad and I can’t wait to hold your hand for the next leg of this journey. What a grand adventure it will be.