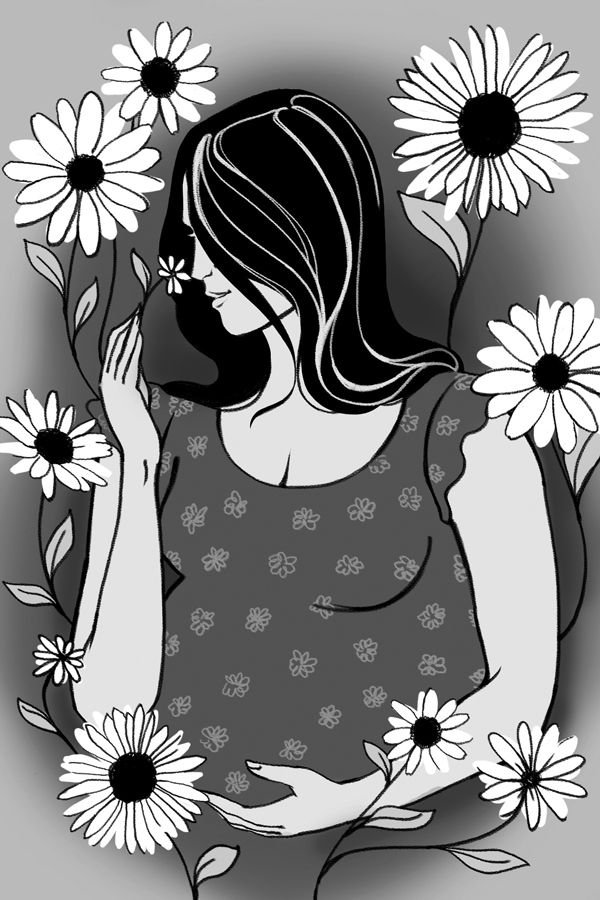 I have no idea how, but here we are—the third trimester, the home stretch. When this issue hits the stands, I’ll be approaching week 31 of my pregnancy (the typical length of human gestation is 40 weeks). While “two months from now” might feel like a while, I know better. Months three through seven literally zoomed past me when I wasn’t paying attention, so the arrival of our little one is now feeling super imminent.

Our baby is now the size of a large coconut—approximately three and a half pounds—and on the cusp of the last big growth spurt, which will see it adding a half pound to its fighting weight each week. And somehow I’m not even that freaked out. Maybe all that hippie brainwashing is paying off! We got tired of referring to the baby as produce, so we gave it a pet name. We still aren’t finding out the gender and we haven’t settled on any actual names, but we lovingly refer to it as Babe Babelington. A dignified moniker, no?

We are in the midst of our childbirth classes, which meet weekly and wrap up in mid-October. My husband has been learning about how to help coach me through an unmedicated labor using massage and breathing techniques, and he is actually getting really jazzed for his role in this whole magical moment. We’re also talking about important baby care subjects like breastfeeding, safe sleeping, and how to recognize postpartum anxiety and depression. One week I got to practice breastfeeding positions with a stuffed Tyrannosaurus Rex when the instructor ran out of baby dolls. The class, in combination with our continued plan to “read all the things,” has us feeling pretty good about our preparation, but also like we’re training for a very intense and high stakes marathon… which I guess we are.

All my sadness about not showing that much and not feeling movement regularly have essentially fallen to the wayside, as I’ve now reached the point of being inescapably pregnant. I’m still wearing my normal clothes, but when I catch sight of my own reflection, I often think of the spherical Violet Beauregarde from Willy Wonka & The Chocolate Factory. And the baby moves at least five times a day now, most recently staging a full salsa performance while I was reclining on the couch watching Buffy the Vampire Slayer.

I passed my gestational diabetes screen and all my bloodwork is looking good. They snuck in a vaccine at my last visit and I was quickly reminded that even though I’m a grown-up, shots still hurt. I remain grateful for my experience thus far, as I think I’ve had it pretty easy, all things considered. But I would be lying if I said there weren’t some new, slightly horrifying wrinkles appearing in my everyday life.

It only seems fitting that at this spooky time of year, I get super real with y’all about one of the most terrifying and unexpected aspects of pregnancy: YOUR BONES MOVE. If you’ve been pregnant before or have close family or friends who have been, you may have known that. But I, a 33-year-old, college-educated, daughter of a nurse, somehow did not. I’d heard all the catty jokes about pregnancy widening your hips and such, but old ladies have been telling me I had “birthing hips” since I was 12, so I never really paid it much attention.

The simple physics of it are that your body releases a hormone called relaxin. The name makes it seem like a chill friend that would just want to have margaritas by the pool or something. But no, it’s there to loosen all your joints in preparation for delivery. The human body is a magical, mystical, miracle machine. And the female body is especially impressive in its reproductive functioning, but a lot of adjustments have to be made in order for something the size of a watermelon to emerge from an opening the size of a lemon.

So your hip bones and pelvic bones begin to do a little loosey-goosey dance where they spread and the ligaments stretch in order to make the birth canal suitably wide. The catch here is that you can actually feel all of this. Just like any other aspect of pregnancy, some women are more sensitive to it than others, but I don’t think anyone gets away from pregnancy without dealing with—for lack of a better term—a seriously sore crotch.

I struggled with a way to tactfully describe this new complication, but lately any time my husband has texted to check on how I’m feeling, my answer is almost always: “Pretty good, but my vagina hurts.” There’s just no getting around it. I’ve always known, of course, that I had bones that held all the bits and pieces together in the undercarriage, but before this point of pregnancy, I had never actively felt them. And I cannot wait to not feel them again. For the time being, I remain a human marionette, jangling along in this new ungainly manner, as if being manipulated by some invisible puppeteer.

This new bit of weirdness has unfortunately inserted itself pretty aggressively into my life and has slowed my momentum in a major way. I had grand plans to continue working at the bakery for at least a few days a week until Halloween or so. But upon crossing into my third trimester, my body started whining and squealing, its parts seeming to give out rapidly, like an old car.

What used to be a normal eight-hour workday filled with prepping, baking, and cleaning became abject torture. The 80+ degree heat in the kitchen would make me nauseated, sweat pouring down my face as I fought to keep my breakfast down. I found myself moving so much slower; tasks that I used to easily accomplish in 15 minutes took double that, if not more. I felt like I was moving through molasses. And that was just the beginning. After a 15 minute car ride home, I’d find myself in the driveway, struggling to emerge from my car and bracing myself on the side of the house just to be able to put one foot in front of the other. It felt very much like I feel after dancing a six-mile parade with my Mardi Gras krewe, except it didn’t go away.

Lately any time my husband has texted to check on how I’m feeling, my answer is almost always: “Pretty good, but my vagina hurts.”

I continued to insist that I was fine for a few weeks, but that illusion shattered pretty easily when I hit 29 weeks. The weekend began with an especially busy day at the bakery, during which I took at least five extended bathroom breaks to sit on the floor and deep breathe, trying to push the pain out of my body so that I could finish my work. That night, I finally truly understood why pregnant women waddle. I’d always assumed it was because of the shifted center of gravity or major weight gain, but that’s not it (or not all of it, at least). I truly could not locomote my body in a way that didn’t involve me walking like John Wayne. It was the first moment I have felt incredibly, painfully pregnant during this process.

Never one to take a hint easily, however, I decided it was a good idea to go to the Saints game two days later. My friend generously offered us some tickets and I figured it was likely my last chance to see a game this season. Nevermind that we were playing the Patriots and I was certain we were going to lose. We parked in my husband’s work lot, which is conveniently free, but also quite a hike from the dome.

It was a 20 minute walk from the car, followed by a climb up the ramps to the 600 section. By the time we arrived, I was barely stifling back tears and insisted to my husband that I would wait at the dome while he got the car after the game. But of course, hours passed and I convinced myself that I was fine and the walk would probably do me good, so I “bravely” soldiered on. Because I am an idiot.

I spent all of that evening in severe pain, unable to change positions, stand, or walk without wincing. I could actively feel the bones of my pelvis shifting with each movement I made. There have been a lot of weird moments in this pregnancy so far, but this was the one where I finally had to admit that I am REAL pregnant now and I can’t keep doing this kind of crap to my body. After a chat with my midwives, they suggested some serious rest, so I spent the better part of the next day completely prone, except for an hour at yoga class.

It has been hard to admit that I can’t do all the things I used to do or still want to do. But the simple fact remains that my body is doing some incredibly hard work right now. And no matter how good I think I might feel, I am not who (or what) I was eight months ago. I’m growing a life and that’s messy stuff. I must remember to honor that and treat my body a little more gently—a lesson I’ve now painfully learned.