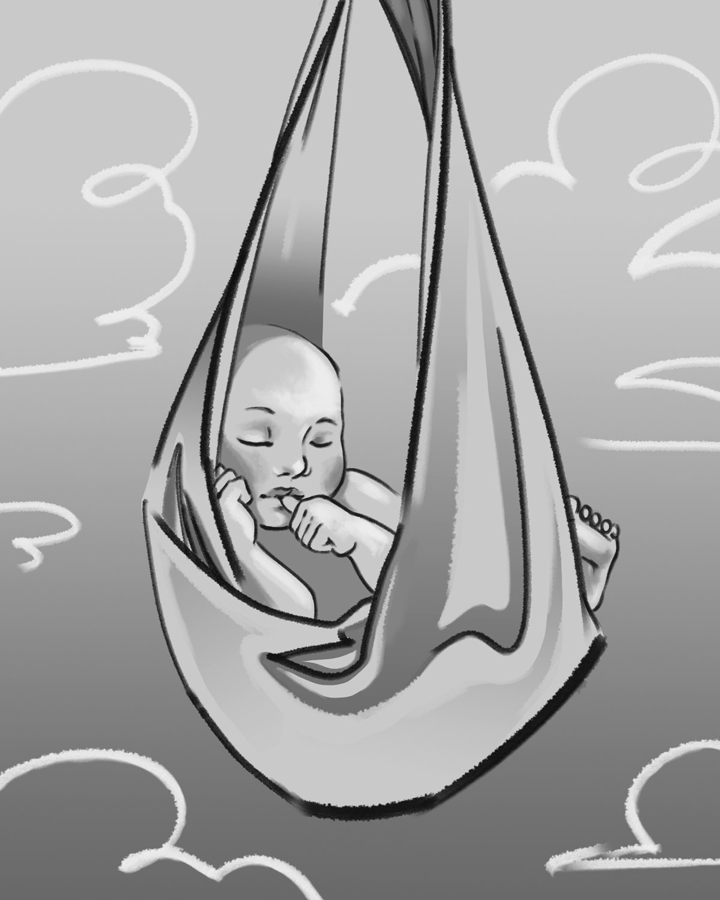 END OF THE ROAD

Chances are that as you read this column, I am holding my newborn child. As I sit here composing it, our due date is less than three weeks away and we’re becoming keenly aware that a season of our lives is rapidly coming to an end.

The last nine-plus months have been filled with a plethora of powerful—sometimes conflicting—emotions. Some days it feels like just yesterday we were celebrating our wedding and excitedly planning our European honeymoon (which, of course, never happened). Other days I feel like I’ve been pregnant for approximately 84 years.

We are still filling our days and nights with preparations for the impending arrival, and I’ve had to make peace with the fact that everything probably won’t be perfect and “ready” when our child arrives. I could blame this on my husband’s chronic issues with timeliness and organization, but I think the universe is just trying to reinforce to my rigid Capricorn brain that this is only the beginning of all the things I can’t control about being a parent. The baby has a safe place to sleep, some diapers, at least a few pieces of clothing to wear, and nourishment on demand (see: me). So we’ll be fine.

This month, I’d like to indulge in a little premature nostalgia. While we’re not out of the woods yet (make sure to pick up our January 2018 issue to read the tale of how the actual birth went down) I’m at a place where I can look back fondly at the things that sustained me throughout this pregnancy. No two pregnancies are the same—even subsequent ones for the same woman—so these things may be of literally zero use to you, but here are my top ten survival tools for pregnancy:

You’ll hear this refrain pretty regularly from your prenatal providers, but it’s true. If you’ve got access to a pool, USE IT. Being able to stay active without having to do high impact cardio was a massive help in preventing too much weight gain for me.

This pillow is everything. Upon the recommendation of many friends, we got it really early on in my pregnancy, so I thankfully never got to the point of having sleepless nights that needed fixing. It’s a giant c-shaped monstrosity that will take up most of your bed—we refer to it as the “Great Wall”—but it will support your growing belly, stabilize your back, and allow you to actually rest in between those 77 visits to the bathroom.

My sister-in-law gave me this book, and of all the ones I’ve read in preparation for delivery, it’s still the most precious to me. The first half is composed of real women’s natural birth stories and it showcases the good, bad, and ugly of unmedicated childbirth. The back half goes into extensive detail about the actual mechanical processes of labor and how best to work with your body to achieve a safe, drug-free delivery. Ina May is known as the mother of modern midwifery and she’s admittedly a total hippie, but I’m here for it. This book gave me the confidence I needed to embark on a purposeful journey towards a natural delivery without fear.

This one has served a dual purpose. Earlier in my pregnancy when I felt like I wasn’t showing at all, wearing this support brief under my clothing rounded out my nearly-nonexistent bump and helped me to feel more like a mom-to-be. As my pregnancy progressed, it continued to make my clothes look more flattering while also helping to support my growing midsection. It’s a great piece for helping plus size moms deal with the complicated emotions that can come with pregnancy body changes.

Fun story: I hate Tums. My mom gave me one when I was nine years old and had a stomach ache. I told her it was the worst thing I’d ever tasted and I immediately threw up. Now, I was probably gonna throw up anyway—I clearly had a virus—but I blamed the Tums… for like 20 years. My husband had never been able to get me to take one, for any reason, during the decade we’d been together. But then I got pregnant. And I got heartburn. So. Much. Heartburn. Constant, low-grade, annoying acid reflux. In the last 20 weeks, I have pretty much single-handedly crushed two whole bottles of Tums. They are the greatest thing on planet Earth and we should canonize Jim Howe for inventing them.

I’ve always been a sucker for a good massage. This is a very no-frills spot located in an office building in Old Metairie—no spa robes here, folks! They offer a monthly membership for just $60. I’ve been going in for monthly hour-long massages for the last four months and I can tell you it’s the best money I’ve ever spent. Jobeth and Elaine have been keeping me from quite literally falling apart.

This one is a two-parter. I’m super grateful to have been evaluated by two talented therapists at Ochsner to identify the mystery cause of my sudden onset pelvic pain around week 28. The first of them recommended the SI Loc Belt, which has been pretty much the only reason I’ve been able to walk for the last three months. The second therapist helped with further adjustments and also had recently attended a workshop about physical therapy and its role in birthing; she was able to tell me all about the shape of my pelvic outlet and which positions are likely to be the most productive and comfortable during labor. So thank you, Lisette and Jenny—you saved my crotch!

I know a lot of people think childbirth classes are a waste of time and money, but I couldn’t disagree more. Even though my husband and I are educated, well-read people, we have a blind spot for this stuff because we’ve never done it before and nobody really close to us has either. We did a six-week course with Kim Davis, a local doula, and it was immensely helpful. It forced us to get into the habit of practicing for labor and talking about how we want to handle situations if they arise. It helped us to feel informed and empowered, and gave us a forum to talk openly with other parents-to-be about both our fears and our excitement.

We have been very grateful to the staff at Ochsner Baptist for their support and encouragement throughout my pregnancy. The midwives on staff at the ABC are some of the kindest and most involved healthcare providers I’ve ever had. The whole vibe of the office is welcoming and warm. Even when things had the potential to get scary, we didn’t worry with them by our side. We’re super lucky to have this resource in our city. If you’re interested in low-intervention, natural childbirth and prenatal care, I couldn’t recommend them more highly.

This one feels like it could go without saying, but I’ll say it anyway. Having a supportive, engaged partner can truly transform a pregnant woman’s experience. My husband, from the start, has been eager to help in any way he could. He’s encouraged me to stay active. He’s helped me continue eating a balanced diet (but also hasn’t shamed me for the occasional indulgence). He regularly asks what, if anything, he can do to help me when I’m in discomfort or pain. He’s put together baby furniture even when he’s exhausted from a long work week. He’s attended childbirth classes, breastfeeding classes, and newborn care classes. He is committed to his role as my labor coach. He’s practicing his swaddling technique and reading books about being a father. He talks to Babe Babelington every day and is just as excited as I am to meet our little one. The other nine items I listed have been luxuriously nice to have during this pregnancy; but in the end, the thing I needed the most was him. And he didn’t let me down.

Before I sign off, let’s play a fun game. There are tons of old wives’ tales about how you can determine a baby’s sex based on things that happen during the pregnancy. Since we’re not finding out the sex in advance, it’s been fun for us to tally up the “boy” points and “girl” points to see how they bear out in reality!

Sweet vs. Salty Cravings
The theory goes that a boy makes you crave salty and a girl makes you crave sweets. This one is a toss-up, because I leaned salty at first (pickled beets specifically), but became a total sugar monster in the third trimester. TIE

Morning Sickness
Apparently carrying a girl is supposed to make you hug the toilet more often than if you’re carrying a boy. I didn’t throw up once. BOY

“Beauty”
This one relates mostly to things like hair thickness and complexion; and the theory is that if you’re carrying a girl, she steals your beauty and you’ll end up losing hair and suffering from acne etc. I’ve had significantly less oil in my skin and loose hair in my brush for the last nine months. BOY

Weight Gain
It’s said that if you gain all your weight in your belly, you’re carrying a boy. Those who gain weight all over are said to be carrying a girl. Thankfully I’ve not gotten real puffy, so all of my 25-ish pounds seem to have gone straight to the bump. BOY

Carrying High or Low
Boys are said to be lowriders, while girls hang up closer to the ribs. I don’t think I’m particularly obvious in either direction, but having seen what “carrying low” can really look like, I think I’m probably on the higher side. GIRL

Heart Rate
A baby’s heart rate changes a ton throughout gestation, but it’s said that girls typically have higher rates. Up until very recently (when apparently the heart rate fluctuates even more due to increased brain development) Babe Babelington was always in the 150s. GIRL

Chinese Gender Chart
This is a nifty little chart that magics up a guess by taking into account your age and the month of the baby’s conception. A lot of people swear by this one! GIRL

Body Hair
The theory here is that carrying a boy gives you a testosterone boost that may see you growing body hair faster and thicker. I was able to go 5 months without an eyebrow wax, which genuinely freaked me out and made me wonder if maybe there wasn’t a little extra estrogen floating around in there. GIRL

Check back in January to see if those old wives are full of it or not!