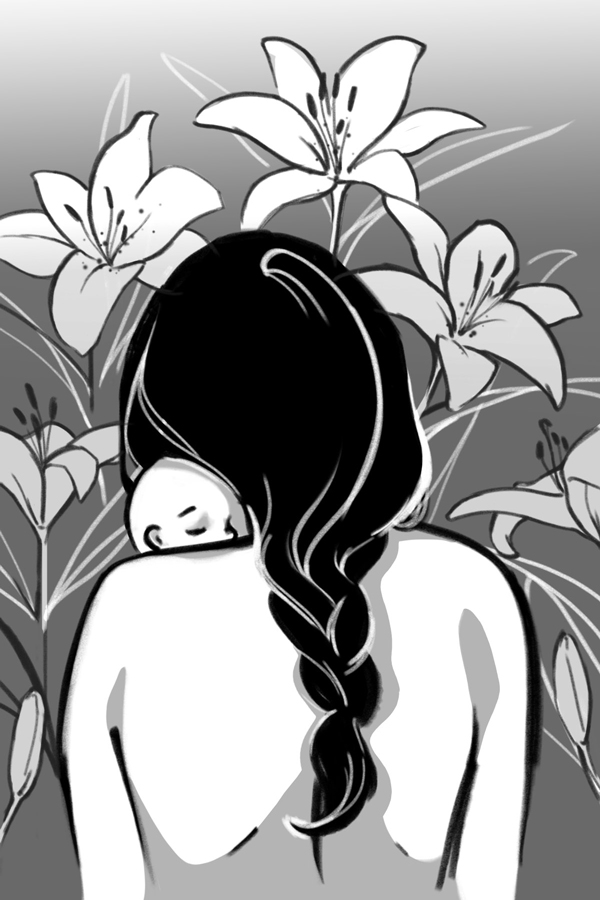 If you read last month’s special installment, you’re aware that our son Emmett arrived on December 8th in spectacular fashion. Since then, my husband John and I have been swept up in a nonstop whirlwind of emotion. And not just the kind that comes courtesy of having a newborn, unfortunately.

As I pen this month’s entry, my son is asleep on my chest in a cloth carrier, because he refused to be put down for a nap. The first seven weeks of his life have held very little in the way of consistency. As much as I’ve tried, the reality remains that I’m barely stringing it together. And while what’s befallen me hasn’t been traditional postpartum depression, it’s taken a similar toll.

I had grand plans for an unmedicated birth. They went out the window. I still have tinges of sadness about it, but nearly two months out from the birth, I’ve come to terms with what happened and I know it wasn’t the result of any sort of failing on my part. My child came into the world healthy and that’s what matters. Despite the complications of my labor, though, I was determined to breastfeed if at all possible.

Those first two nights in the hospital, Emmett slept mostly like a champ and he took to breastfeeding really well. Our lactation consultant, Joyce, was a complete doll and very encouraging. She assured me that my body would do the work it needed to do and that Emmett and I would find a rhythm to nursing as we developed our relationship. I was eager and optimistic.

The first few days after birth, the body produces something called colostrum to feed the baby. His tiny little stomach didn’t need much to be full; and mostly, life was peaceful snoozing and sweet nuzzling. I was told my milk would come in approximately three to five days after delivery, when Emmett’s nutritional needs would increase. I bet you already know what I’m about to say next. That’s right—it didn’t come in.

I had no engorgement or leaking like everyone said I would. Emmett nursed and nursed and nursed, never seeming to be satisfied. I was sure that I was literally starving my baby to death. When he lost six ounces in the first few days of his life, I started to worry that this was just one more thing I wouldn’t be able to do for my child the way I had wanted to. My hormones flying all over the place, I hurled myself into crying jags every evening when Emmett began cluster feeding (that is, feeding back to back with no break). After a few sleep-deprived days, I told John that I wasn’t sure I was cut out for being a mother.

What no one ever told me, of course, is that there are tons of reasons why a woman’s milk may be slow to come in. Chiefly among them are having received high doses of pitocin and suffering significant blood loss during labor, both of which I had abundantly. I spoke to a lactation consultant over the phone and she assured me that as long as Emmett was back to his birth weight by the two-week mark, that I was doing just fine. I was told to pump in between nursing sessions to signal to my body that it needed to make more milk. And that no matter the hour or how long it had been since his last feeding, if he showed even a slight sign of hunger, I was to “put that baby to the breast.” So I did—constantly.

Some sweet friends even dropped off a basket of lactation aids for me: herbs like fenugreek and blessed thistle, mother’s milk tea, plus oatmeal and flaxseed so that John could make me lactation cookies. I took them all religiously and tried to pump whenever possible (which is a tall order when you have visitors stopping by all the time). I was starting to feel more confident that I could get on track and that the worst was over. I had no idea how much worse it could get.

The morning of Monday, December 18th—just 10 days after Emmett’s birth—I received a voicemail from my mom, informing me that my dad had been taken to the local ER in my hometown for some circulation issues. We had a pediatrician appointment that afternoon to check Emmett’s weight, so I told her to keep me posted and we could make a plan from there.

As we sat in the lobby waiting for our appointment, she called again. They were transferring him to a regional hospital in a bigger city. I could hear it in her voice and my heart dropped. She had a bad feeling. Something just didn’t feel right. We went back with the nurse, and Emmett was still a few ounces below his birth weight. Nothing startling, but still defeating in the face of all the work I’d put in to increase my milk supply. The day was rapidly spiraling downhill.

That evening, mom called and relayed the very scary news that dad had coded upon his arrival at that regional hospital. They had managed to resuscitate him, but he hadn’t yet “woken up,” and there were concerns about neurological damage. I barely slept a wink that night.

By the next day, the picture was coming into focus. The brain scans had shown that his brain stem (which keeps your primary organ systems firing) was functional, but there was very little “upper brain” activity in the areas that control things like speech, memory, movement, and personality. We were told it was a waiting game now. If there was no improvement within a week, things were unlikely to improve—ever. That one week mark fell, cruelly, on Christmas day.

The next few weeks would pass in a haze of exhaustion and tears. We spent that first week at the hospital with my family, staying in the on-site hotel. I was loathe to bring a newborn anywhere near a hospital, but I couldn’t stand the thought of being away from my family and I couldn’t very well be away from my child, who was totally dependent on me. I was stuck in a horrible situation. I would nurse Emmett and then run to the ICU to sit with daddy for a while, before heading back to the room to nurse again. I felt pulled in opposing directions constantly, and my emotions were threadbare.

My dad’s condition did not improve. We were told he had no real hope for recovery and everyone was in agreement that he wouldn’t want to merely “exist” and not truly live. After nearly three weeks in the ICU, we made the difficult decision to remove him from the ventilator. He was moved to a suite in another wing of the hospital and we were all able to be with him there.

The morning before my dad passed, I brought Emmett, tucked snugly against me in a body wrap, to sit with his grandfather. I talked to them both, though neither could talk back. I told daddy all about Emmett’s budding personality, and I told Emmett about his grandfather’s keen sense of humor. The few hours I had alone with just the two of them were so bittersweet. We had been set to visit my family for Christmas, you see. So I told my parents not to worry about coming to New Orleans when Emmett was born. It was just a few days, right? What harm could it do? The fact that my father never got to meet his grandson is something that I will regret for the rest of my days.

I thought Emmett’s birth would be my greatest challenge, but fate had other plans. Nothing could have prepared me for the impossible feat of trying to figure out how to be someone’s mother while I felt like a scared little girl myself. There were plentiful breakdowns and many moments when I unloaded far too much on my husband. I honestly started to wonder if I had made a huge mistake by becoming a mother.

Between the time at the hospital hotel and the time spent at my family’s home in Alabama before and after my father’s funeral, Emmett has spent twice as much time away from home as he has at home. I’m still not super confident in my milk supply, and we’re struggling to establish any sort of schedule that allows for me to get some work done during the day. John is wrapping up paternity leave and I’ll soon be on my own with the baby every day. And frankly, that terrifies me.

The morning before my dad passed, I brought Emmett, tucked snugly against me in a body wrap, to sit with his grandfather. I talked to them both, though neither could talk back.

This—all of this—is nothing like I imagined it would be. I feel like I’m not doing anything right for my kid, and I’m still fighting waves of unspeakable grief that threaten to swallow me whole. There isn’t an hour that passes where something doesn’t remind me of my father, and the wound seems to open anew. I love my child. I really do. But when people insist that his existence should be some magical cure-all to the stabbing grief of losing my father, all I can think is that I didn’t agree to a trade. The reality is that I am still getting to know my son. But I have never known life without my father.

At some point in this terrible process, I started to feel that I was becoming unmoored from reality, and it scared me to death. Thankfully, I was able to admit that I couldn’t get through this without help. I recently began seeing a therapist and my midwives put me on an antidepressant. Between this and the constant, patient support of my husband, I hope to find a way through this unexpectedly harrowing season of our lives. I know our adventure in parenthood is just beginning, but hopefully the road will become at least a little less rocky soon.