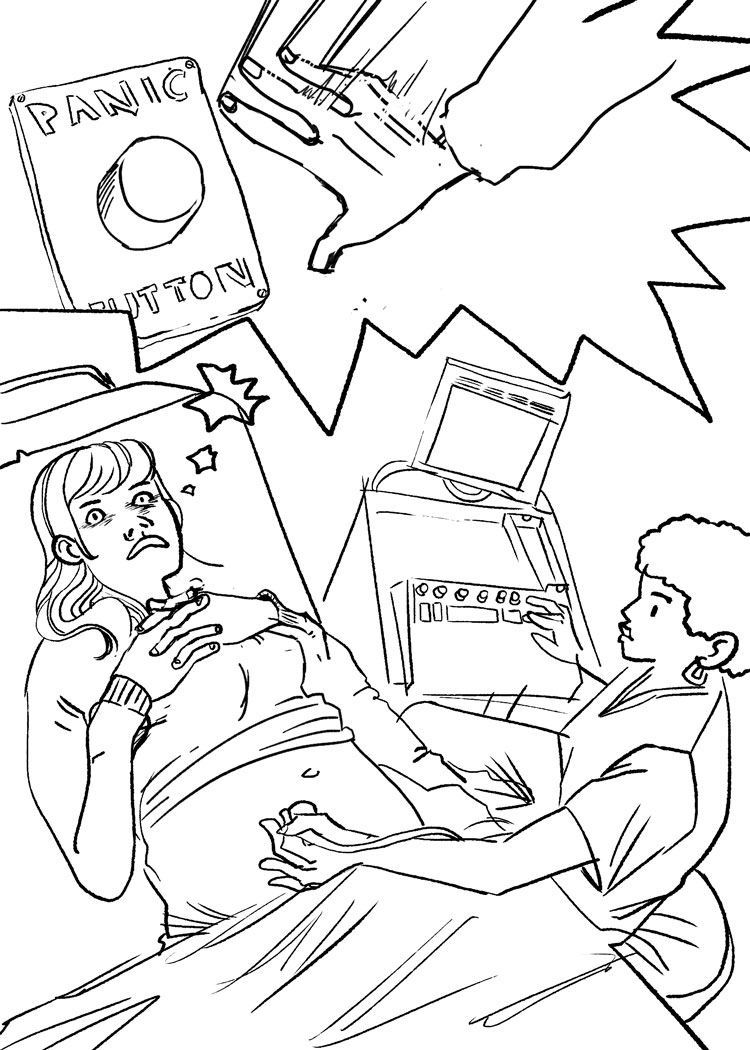 Hello again. Welcome back to the Wonderful World of My Uterus. Things are moving right along and, as this issue debuts, I am at 18 weeks (food reference: a bell pepper), just two weeks shy of the midpoint of my pregnancy! This is both elating in the sense of Halfway done, woohoo! and terrifying in the sense of HALFWAY? No! There’s so much left to do! This installment covers the return—or perhaps just the continuation—of my battle with the anxiety monster, and a reflection on why we made the decision to embark on an intentional journey towards a natural, drug-free delivery.

COME OUT, COME OUT, WHEREVER YOU ARE

Our 12-week appointment was horrible. Well, it wasn’t all bad. But it was touch-and- go for a minute. The doc could sense my anxiety the minute she walked in the room. We chatted a bit about standard things like how I’m feeling and what to expect of the coming weeks. Then came the moment of truth: she broke out the fetal doppler and said, “Let’s listen to your baby’s heartbeat!”

I imagine that for many women, this moment is ripe with joy and anticipation. For me, it was pure, hardboiled dread. The pit in my stomach grew and grew until it threatened to swallow the whole room as she searched, unable to find anything other than the white noise of my guts processing the PB&J I had for lunch. I’m sure that my face by that point was a mask of horror, as she quickly said, “You know what— let’s just go to ultrasound.”

So we waited a few minutes while they set up the room and I stared at my husband, who tried in vain to comfort me while I met his sweetness with cold detachment. When we were finally ready for the ultrasound, I got a liberal smearing of jelly on the belly and we went hunting once more for proof that I hadn’t made this whole thing up. Minutes passed and I heard and saw only static. At this point, my heart dropped into my feet and I was sure that we’d lost the baby.

The doctor then suggested a vaginal ultrasound, which took another few minutes to set up. About 90 seconds in, she turned the monitor to face me and said, “See, I told you everything was fine.” I might have actually left my body in that moment. There you are, little one. Heart beating 145 times a minute and flexing your little feet. Not for the first time—or, I’m sure, the last—you nearly gave us a heart attack.

The doctor went on to tell me that if she’d had five more minutes, she would’ve found the heartbeat with the doppler. And that she could see the heartbeat on the external ultrasound, but knew that I couldn’t. Bless you, Dr. Lapeyre, to the ends of the Earth, for taking the extra steps not just to reassure me that you could see that everything was fine, but for making sure that I saw it with my own eyes. You are the patron saint of high-strung, first-time mothers.

After the appointment, I debated whether I was ready to tell people, but I didn’t think I could handle another month of secrecy. Also, the first installment of this column was coming out, so I’d backed myself into a bit of a corner, really. Ergo, everyone knows now. I posted a collage: a cute picture of my dogs in the ill-fitting Christmas costumes my mom sent them last year, a little knit baby hat with a gift box that announced “Santa’s Little Helper, arriving December 2017,” and the sonogram image, in which my then- 8-week-old baby looks exactly like a gummi bear with alien eyes.

I was relieved. And then I immediately wanted to throw up. Because if something goes off the rails now, I get to either A) discuss a horribly painful thing very publicly, or B) say nothing and then spend months individually telling everyone I run into that something went wrong. Much like almost every moment of this pregnancy thus far, I remain possessed of a simultaneous excitement coupled with unbridled terror.

So, I was raised by a nurse. She’s said for years that it’s completely insane to her that women these days can “have a baby and calmly knit a blanket at the same time,” due to the widespread use of epidurals for pain relief. This constant refrain in my mind shaped me to believe that natural, unmedicated childbirth was the best way to go and that relying on pain relief was, in a way, an easy out. I mean, women are tough as nails, dammit. Men could never bear the pain, but we’re warriors! Right?

Then I mentioned to my mom that I planned to have an unmedicated birth with as little intervention as possible. The line was silent for a moment before she came in with a quick sigh and said, “Well honey, you know not everyone is cut out for that.” I can’t lie—I felt a little bit betrayed. Like, my own mom doesn’t think I can do this? She then reminded me of what a colossal wuss I was after my only major surgery, but I protested that it was dental pain, which is a very unique type of pain. To which she smartly responded, “Well, so is pushing out a baby.” Fair point, Dawn.

I began to question myself. I bought and borrowed books on the natural birthing process and consulted a friend of mine who is an RN and in training to be a midwife. I dug deep inside my cynical brain and asked myself the hardest question: “Are you really enough of a hippie to pull this off?” And the answer surprised me. It may be my Capricorn stubbornness, or it may be some deep universal truth my soul has simply acknowledged, but here’s the dish: I know I can do this. My body was literally built to do this. Generations upon generations of women have done this before me. Unless something goes horribly wrong, I will not accept pain medication during the birth of my child. But I’m also not stupid enough to think I can get prepared for such a major undertaking alone. I’m enlisting a posse of midwives, a prenatal yoga practitioner, an immersive 12-weeklong couple-focused natural childbirth class, a library of reading material, and a bunch of hippie baby gear. Crunchtown, here I come!

SHE’S A MIDWIFE, NOT A WOOD SPRITE

The practice of midwifery is pretty ancient if we’re being real about it. Long before there were Maternal Fetal Medicine Specialists and 3-D ultrasound machines in every mall, there were midwives—expert women who ushered new life into the world in all its messy, bloody, wondrous glory. However, it seems that many people’s ideas of what a midwife does is still shaped by an outdated perception of them as, essentially, mystical forest entities. Like, am I going to have to pull the baby out myself, and will she make me eat the placenta? I’m pretty sure some of our family members have this exact impression of midwifery and I could read it in the nervousness present in their voices when we told them our game plan.

Let me assure you that though it may be a bit granola for some gals’ tastes, midwife care is equal in quality and safety to that of a traditional obstetrician. With this in mind and with the determination that we were committed to a natural birth plan, we made the call to switch over our prenatal care to the midwives of the Ochsner Baptist Perkin Alternative Birth Center.

I got a liberal smearing of jelly on the belly and we went hunting once more for proof that I hadn’t made this whole thing up.

We began this new leg of our journey at the 16-week check-up. We saw Esther, the first of four midwives on staff at the ABC. We’ll see her in rotation with the other three for subsequent visits, so that no matter who is on call when I go into labor, it’s someone I’m comfortable with and with whom I’ve spent quality time during my pregnancy (a major selling point for us!) The difference in my experience at the ABC versus the previous two visits with the OB’s office was significant. I immediately felt more comfortable. The staff was warm and welcoming and let me ramble on about my anxiety and every little thing that I’ve let consume my mind during this pregnancy. Esther was patient, understanding, and good humored, even when it came time for her to take a hard line with me.

I had been a bit stressed out, in particular, about having the “weight” conversation. Being plus-size before pregnancy, I’m carrying a lot of baggage (pun not actually intended, but somewhat valid). Despite the fact that I live a pretty healthy lifestyle, science and medicine say that I’m simply a higher risk as a pregnant woman. When it came time to talk about weight gain, Esther was very plainspoken, but never cruel or judgemental. The reality is that the ABC is set up for low-risk patients, so if I gain more than 30 pounds, I will be unable to deliver there and will need to be accompanied by a midwife to the regular labor and delivery unit. Now, I can’t tell you the future, but I plan to fight like hell to keep myself under that weight, so send those good skinny-girl vibes my way.

I am abundantly aware of my limits— technically it is recommended that I gain just 11 to 20 pounds throughout my entire pregnancy based on my pre-pregnancy BMI—and she seemed encouraged to know that I had done my research and was actively working towards a healthy pregnancy. As a matter of fact, I’d lost 4 pounds since my 12-week check-up, putting me back at my pre-pregnancy weight! We discussed my usual diet and she gave me handclaps for 95% of it, while helpfully pointing out that I should check my cereal ingredient list and if any form of sugar was one of the first three ingredients, to stop eating it in order to lessen my chances of developing gestational diabetes (for reference: Raisin Bran and Special K are both a lie, but Kashi Go Lean passes the test).

When it came time to break out the doppler, the anxiety demons crawled closer to the surface, but I had promised myself that I would think positively and be patient with the process. After about three minutes of searching, we heard a most beautiful sound: the steady, rhythmic beating of our child’s heart. Behind it could be heard a soft whooshing noise, which Esther informed me was my blood flowing into the placenta, sustaining my baby. In that moment, I felt so many things: relief, excitement, and— finally—a sense that everything really was going to be okay.