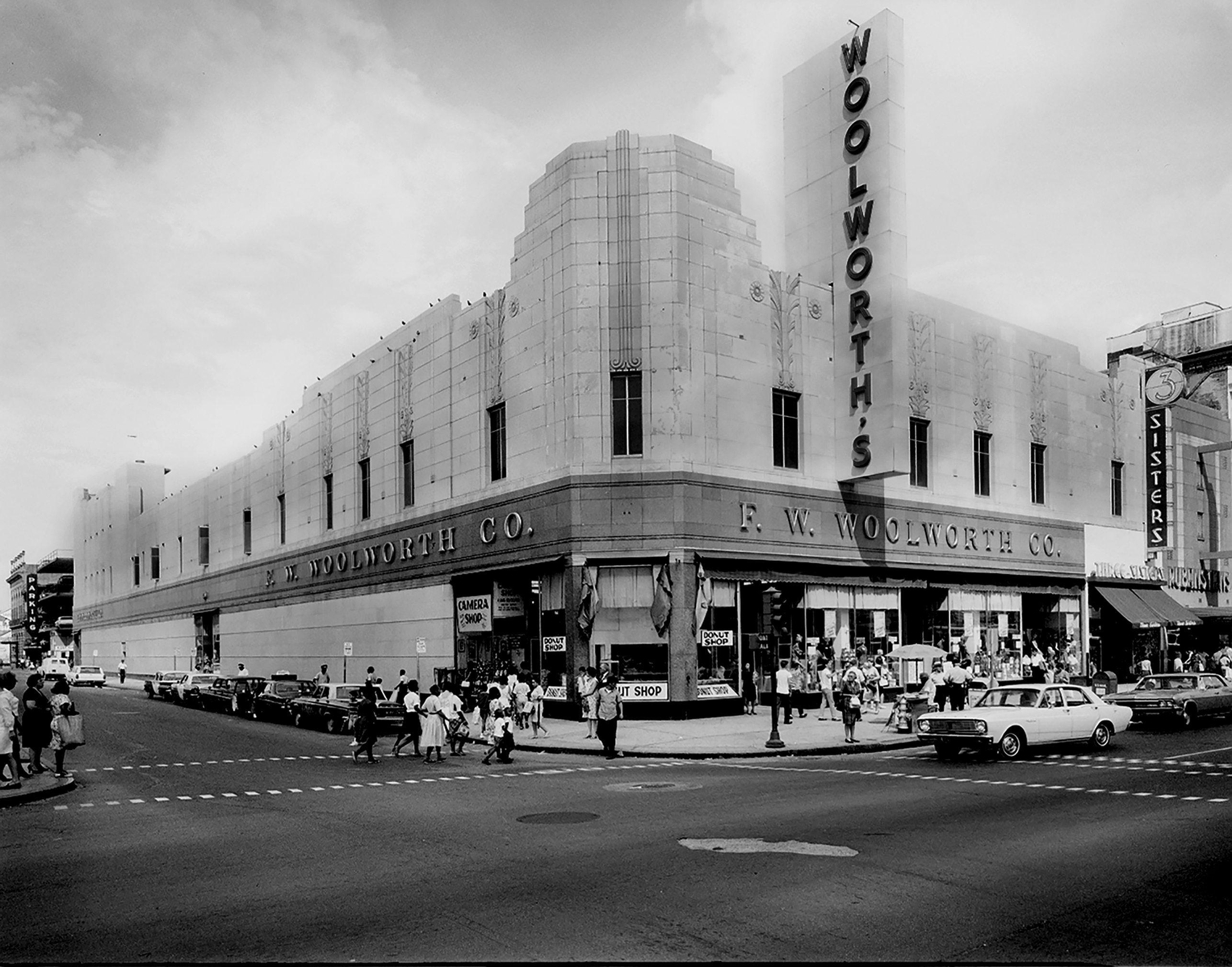 Imagine a trip on the St. Charles streetcar; it’s 1950. You get off at Canal and Carondelet, drop into one of the many department stores to peruse the latest fashions and then into Woolworth’s for a bite to eat at the lunch counter before heading back Uptown. Before you get excited and nostalgic about the “good old days,” take off those rose-tinted glasses and remember that the mid-century was a time of strict and brutal segregation in the South. While New Orleans was (and is) different, it was not immune to the Jim Crow South.

The shops on Canal were, for the most part, owned by wealthy white uptown Protestants. While African Americans could shop along Canal, it was under an unwelcoming glare and exclusion from many of its dining establishments. In the late 1950s this was changing, as the Civil Rights movement was pushing for desegregation throughout the United States.

A chapter of the Congress of Racial Equality (CORE) was formed by Rudy Lombard, Oretha Castle Haley, Jerome Smith, and Hugh Murray (a white student from Tulane). On Sept 9, 1960, nine students from CORE (both white and black) decided to “sit-in” at the Woolworth’s lunch counter at 1031 Canal Street. The idea was they would occupy seats at the busy lunch counter until they were served. Eventually the participants were arrested and charged with criminal mischief. Though sit-ins were being used as a tactic nationally, it was the first to occur in New Orleans.

Three days later, Mayor “Chep” Morrison came out against the sit-in, saying “the effect of such demonstrations [was] not in the public interest of [the] community” and that the “economic welfare of this city requires that such demonstrations cease and henceforth… be prohibited by the police department.” This in effect banned further sit-ins. Despite this, about a week later on September 17, 1960, Rudy Lombard, Cecil Carter Jr., Oretha Castle Haley, and Lanny Goldfinch (who was white) walked into the McCrory’s Five-and-Dime at 1005 Canal, located nearby the Woolworth’s, and sat down at the lunch counter. In response to backlash from the city’s white populace for participating in the sit-in, Lanny gave the most honest retort, “I just wanted to have coffee with my friends.” This time there wasn’t a media presence, but this particular case did make it to the Supreme Court in 1963 as Lombard v. Louisiana and was thrown out. The City of New Orleans did not have any laws which explicitly segregated lunch counters, which led to the court finding that the actions of the Mayor set a tone allowing for segregation. “These convictions, commanded as they were by the voice of the state directing segregating service at the restaurant, cannot stand,” Chief Justice Earl Warren wrote in his 1963 decision. Even though it would take years for New Orleans store owners to accept desegregation, the actions of the members of CORE pushed the Civil Rights movement forward.

Years later the Woolworth’s was abandoned and fell into extreme disrepair after Hurricane Katrina. Plans were devised in 2010 to clear the site to make way for condos, unfortunately making no effort for preservation or mention of the location’s defining history. The site has never commemorated the first lunch counter sit-in in New Orleans history and is devoid of even a plaque.

This leads us to today, where 1031-1041 Canal is currently the site of a collapsed building which took the lives of three workers. While a Hard Rock Hotel may on the surface seem like a great addition to the revitalization of Canal Street, we need to recognize the histories that paved the way for the building of a more just world. Sadly, now a memorial should be erected at this site as well, which tells a new story of inequality—a story of shady dealings and cost-cutting measures, where workers were put in danger and their families forced to experience tragic loss, all while the investment firms and CEOs keep widening the gap of disparity. Just as Woolworth’s was not home to the only sit-in, neither is it the only site of negligence at the expense of human life. Let us look to those who have risked their lives for a better world as well as to those who have unfortunately lost their lives so that we know what we should still be fighting for.

Love and thoughts to the families and friends of Anthony Floyd Magrette, Jose Ponce Arreola, and Quinnyon J. Wimberly.