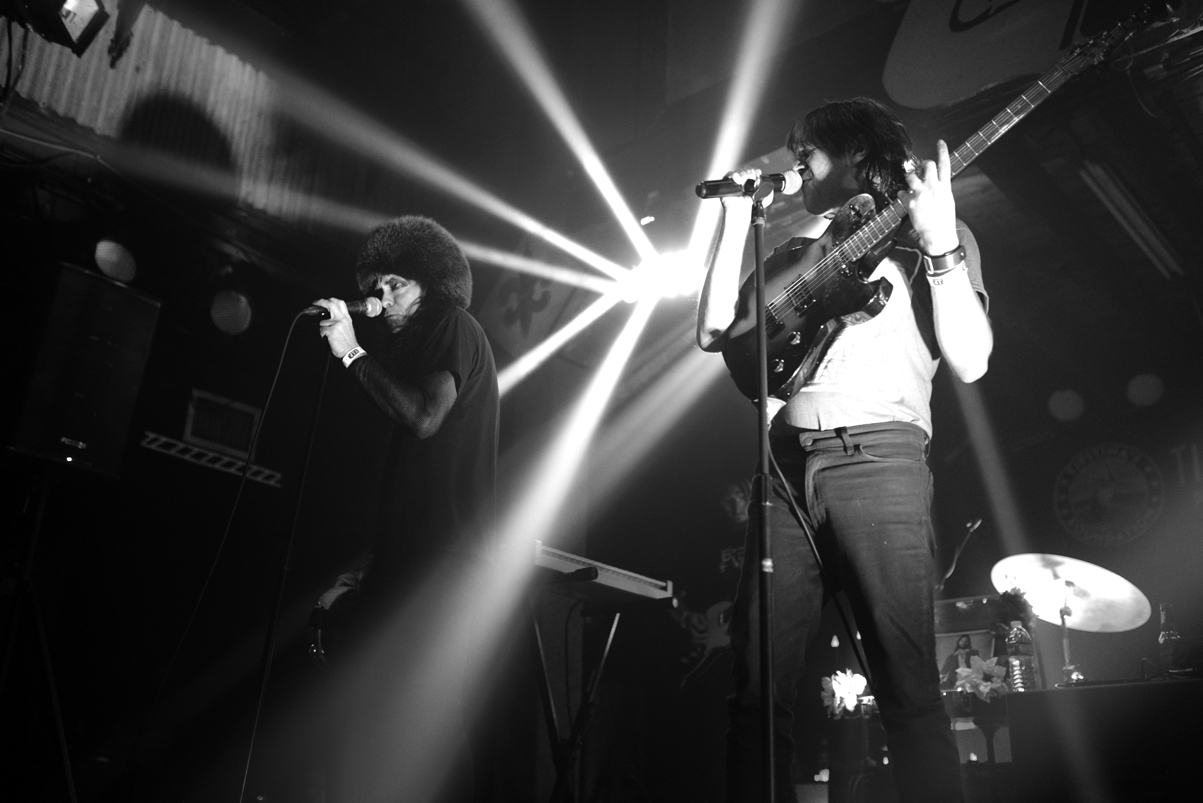 In the days leading up to Ariel Pink’s performance at Tipitina’s, I watched some footage of his recent shows. His voice sounded terrible, a square peg jammed unsuccessfully into the round hole of his band’s tight instrumentals. Watching him live, this incongruity had the opposite effect. His voice drifted along through the songs, slightly flat, often just behind the beat; but it always felt intentional. He occupied an insular space, both in and outside the mix, and made it his home.

Pink has made a career of marketing himself as an outsider, even if that hasn’t always been his goal. In a recent interview, he told Spin he’d spent most of his life desperate for a modicum of mainstream attention. It wasn’t until his late 20s, he claimed, that he finally felt acknowledged by the industry and started to relax. Still, he never fully dropped the outlandish, enigmatic persona he adopted to carve out his niche, and it’s become part of his essence. Throughout his career (now entering its third decade), Pink has been alternately passed over, lauded as a pioneer and transgressive icon, and smeared as a misogynist, a label he earned through a series of ill-advised comments in interviews leading up to the release of Pom Pom in 2014.

He spent some time out of the limelight after that, and rolled out his latest album, Dedicated to Bobby Jameson, without much fanfare in September. His newfound modesty looks good on him. The project is his most mature yet, dealing with his fear of aging and losing relevance through a tribute to Bobby Jameson, a notoriously unsuccessful L.A. musician who passed away in obscurity in 2015.

At Tipitina’s, Pink started things off with a flashback. After opening sets from Bite Marx and Trance Farmers, a female comedian came on to introduce the headliner. The band barged onstage, cutting her short. It was clearly pre-planned and felt good-natured, possibly a poke at Pink’s past transgressions.

The silly exchange that followed between Pink and the comedian was, unfortunately, barely audible—as was most of Pink’s between-song mumbling throughout the night—so his post-Jameson persona was hard to read. Mostly, though, he seemed subdued. In the past, he’s often dressed in drag and ad-libbed off-color jokes throughout his sets. As recently as October, he was accused by fans of getting aggressive with his bandmate and girlfriend, Charlotte Ercoli, during a show in San Francisco; though Ercoli refuted the allegations, claiming she was the aggressor and that her boyfriend was once again being “victimized by feminists.”

Pink stayed mainly on-script at Tip’s, accessorizing with just a plain black dog collar, and kept his hands to himself. He relied on his music rather than his antics to sell the show, and it worked. The band began their set with “Time to Live,” playing over a pre-recorded, looped, and layered chorus vocalizing the titular lyrics, voices warping as the song went on. The early portion of the show focused on new material, which sounded great. The first move back in time came five songs in, with Pom Pom track “White Freckles,” a zany, guitar-driven freakout.

From there, Pink laced Bobby Jameson into his set, but mainly focused on older songs. The show reached its climax about halfway through with “Another Weekend” (the standout single from the new album), leading into “Put Your Number In My Phone” (Pom Pom’s centerpiece). On both these tracks, Pink took centerstage, crooning charismatically over relatively toned down accompaniment.

Mostly, though, Pink made a concerted effort to be inconspicuous at his own show. He ceded much of the attention to his bandmate, L.A. punk legend Don Bolles (Jimmy Michael Giorsetti). Bolles usually plays the drums for Pink, but at Tip’s, he stood up front with a tambourine, providing high-pitched backing vocals to Pink’s detuned drawl. Bolles did much more dancing throughout the set than Pink did, and was generally more energetic; but Pink’s voice stole the show by default, squirming away from the mix in spite of itself to stand alone in all its idiosyncratic glory.

“It’s only gonna get weirder from here,” Pink announced before launching into “Ghosts,” a deep cut from Lover Boy (2002) featuring John Maus. The rest of the regular set, though, was on the softer side. On “Do Yourself a Favor,” the band attempted an ill-advised but beautifully executed attempt at harmonized whistling. They then segued by way of instrumental dirge “Jagged Carnival Tours” into their closer, “Baby,” a cover of the 1979 Donnie and Joe Emerson hit that arguably outshines the original, and exited the stage without fanfare.

It was a quiet end to an unexpectedly uneventful evening of music, but the band was back for a six-song encore, mostly featuring songs from Pink’s 2010 breakout, Before Today. They ended with  “Round and Round,” a career-defining hit from that album. During its iconic chorus, as layers of sound piled onto each other, Pink’s voice rang out in a realm of its own, unable to conform even to the music he wrote for it.