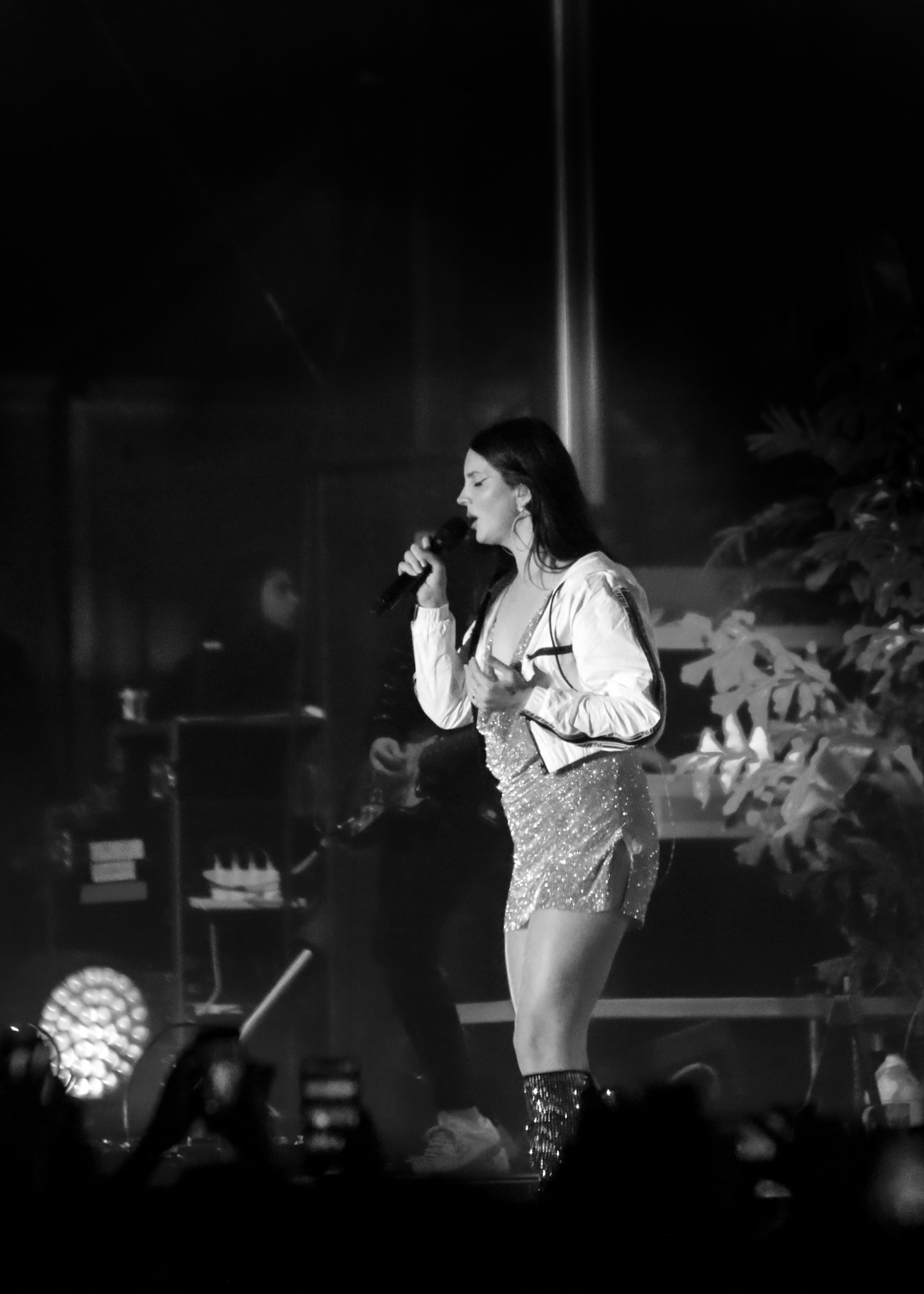 My friend Ami and I walked up to Mardi Gras World reflecting that neither of us had been to a fest (not counting ones we’d played) since our teen years. Immediately we found ourselves in an ocean of teens. We each did our own versions of dressing up for the occasion: Ami looking fresh in mixed camos, me in double-layered fishnets, a crop top, and ambitious eyeshadow. “I’ll fit right in,” I’d thought, proud of myself for going out after a full work day. But I’d drastically misestimated the youth aesthetic: glow-in-the-dark accessories, capes with electric lights, more neon than a mid-aughts Baltimore warehouse, metallic spandex bodysuits, leotards, and the exposed buttcheeks. Ass everywhere, ass ass everywhere. Young butts, plastered with glitter. Any sentence that begins “I’m not a prude, but…” does not end convincingly. I felt guilty just for looking.

Kevin Gates was on the main stage as we entered, with pyrotechnics and a confusing speech, directed strictly to the ladies, about getting dick all the way into your stomach. We grabbed watered-down cocktails and for the first of many times that night I was told, in a tone of awed consolation, that I don’t look my age (just 32, merely spiritually dessicated, only emotionally decrepit, still plausibly fertile). We went off in search of Yves Tumor but instead found the EDM stage. This is where everyone wanted to be. In his youth Ami raved but I never quite got it til just then. Now I know that EDM is actually sick as fuck. It’s FUN. I also learned that nobody smokes cigarettes and everybody juuls.

Realizing our destination, the Float Den, was exactly what it sounded like—the warehouse where Mardi Gras floats hibernate—we found Yves Tumor. This, the smallest stage, had no frills, just an empty stage with red and blue lights. Yet without screens or smoke machines, Yves Tumor were the highest energy performers we saw all night, constantly moving, bringing an energy that felt authentically, aggressively positive. Last year’s Safe in the Hands of Love hadn’t clicked for me—I thought it was good but couldn’t locate an emotional point of entry. I found it in the live show. Mumbled atonal background vocals were delivered with Prince’s relentless, effortless eroticism, while backing tracks evoked the washed mess of Ariel Pink and the faultless confidence of Dean Blunt. I danced, teens on molly made out around me, an unremarkable Tulane student told his friend, “these guys are going to be the next big thing.” Reluctantly, we left before they finished, determined to have a good view for Lana.

Lana. Our queen. The siren who drew us to this unfamiliar (but not unwelcoming) environment. We secured a decent spot and instantly became committed to it, hemmed in on all sides by friendly youths eager to connect. “Did she make you come here too?” a guy doing the concert hug to his short girlfriend asked Ami, mistaking us for a couple. “No, we both came here alone. We are strangers,” Ami said, taking it as far in the opposite direction as possible. We discussed Lana’s power within our human enclosure. Everyone agreed, she moves us to tears. We have all been waiting so long to see her, which felt longer to some than others (four years is a fifth of your life when you’re 20). Excitement mounted. A homemade sign bobbed in the crowd. Applause broke out anytime a stagehand placed a prop on stage (giant fake plants, mostly).

Suddenly, people around us started chanting and holding up their cell phones with the flashlight function on. This was their reaction to a young woman, nearby but out of my sightline, in some kind of crisis. Every instinct in my body screamed out to locate and fireman-carry her to the medical tent, but I kept reminding myself I was at a fest, not at a show that I’d booked and was responsible for, that I’m out of my depth and don’t know the rules here. The kids knew the rules. They cleared a circle around her, took up the chant “Medic! Medic! Medic!” and a fest worker appeared.

“Lana, Lana, Lana” chants began in earnest and ended awkwardly seconds later, never sustaining momentum. Lana took the stage 10 minutes late (which is longer in fest time). Clad in a rhinestone-studded dress, rhinestone-studded Uggs, and a satin bomber jacket, our expressionless goddess rewarded our loyalty by opening with fan favorite “Blue Jeans.” She even sang most of the song, perhaps 75% (by the end of the set her active vocal participation dwindled closer to 25%). The crowd sing-along easily overpowered the live vocals. In the audience there was a marriage proposal. Imagine asking your love to join you in holy matrimony during a song about being devoted to a drug dealer who abandoned you… simply iconic.

Each song was lazily accompanied by its corresponding pre-existing music video projected on the big screen behind the stage, flanked by large vertical screens livestreaming Lana in black and white. Once in a while she danced, or rather made gestures toward dancing, and we lost our minds at the minor exertions. Her two dancers did very little, smiling like they were repressing scoffs at performing so much lower than their skill level—bridesmaids trying not to outshine the bride—throwing first Mardi Gras beads and later polaroids. Lana’s most extravagant choreography was slowly writhing on the stage floor while overhead cameras and the magic of technology created the effect of her floating in water.

As though contractually obliged, Lana ended each song with a high, breathy melismatic ad-lib. I wanted to hear my favorite songs: “Ride,” “Dark Paradise,” “Ultraviolence,” or (a long shot) Ultraviolence bonus track “Guns and Roses.” Lana murmured at one point that she wanted to “keep the energy up” (in no way evinced by her performance) which is a credible excuse for omitting solemn “Ride” (except the stage prop swing is literally from that music video). But it’s more likely because those songs are vocally demanding. By the end of her set, Lana, bored with singing, descended to the front row to sign autographs. I was holding out hope for an encore, but learned that’s not a thing at fests.

In an interview from 2012, Lana discussed her musical influences, citing Nirvana, Elvis, Bob Dylan, and Eminem. “I like all the greats from every genre,” she stated serenely, “just the masters of every genre.” This unwavering commitment to a fully-realized brand is at the core of my devotion to my untalented queen. She can’t facially emote. She can’t dance. Sometimes she can’t stand (she takes breaks kneeling or sitting on the swing). She can’t really sing—live, her limited range lacks a large chunk of the middle, due to her inability to transition from her chest voice to her head voice, which is mostly a matter of breath control. She doesn’t have good politics or things to say. But I love her. I love her so much. She does write most of her own lyrics, and I’ll sing every word along with an enormous crowd of horny teens. Because I’m tired of feeling like I’m fucking crazy, but I heard you like your girls insane. I heard that you like the bad girls. And I want to fucking know—is that true?