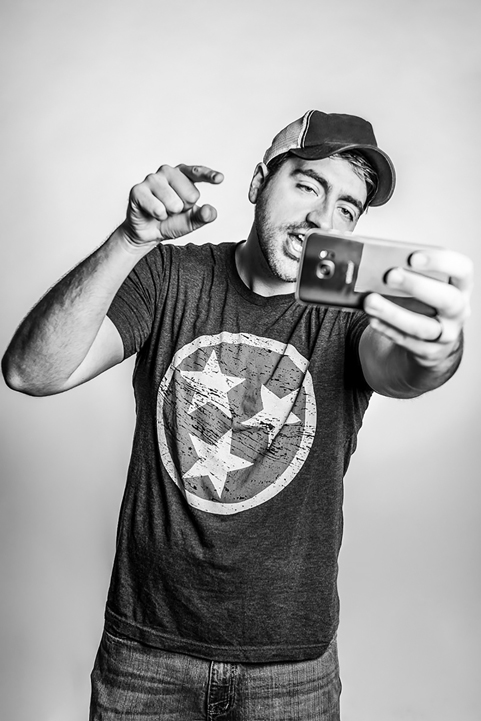 I’ve known for years that I couldn’t be alone: an unbridled love for my Southern roots, nestled alongside the dread I feel entering my parents’ home to hear Bill O’Reilly and Sean Hannity blasting from a big screen TV with startling clarity. Surely I couldn’t be the only person who would slap you for defaming SEC football, but who also believed that separation of church and state is a good thing. Enter Trae Crowder, dubbed “The Liberal Redneck.” His series of viral videos exploded earlier this year, allowing him to ditch his 9-to-5 and focus on comedy full time. Along with his friends Corey Forrester and Drew Morgan, Crowder even penned a book, released in October, entitled The Liberal Redneck Manifesto: Draggin’ Dixie Outta the Dark. The trio is reportedly in talks for a t.v. show as well. Crowder’s bits cover topics ranging from anti-trans bathroom policies and Black Lives Matter to the crisis of drug abuse in our country—a topic very personal to Crowder’s heart, as his mother has long struggled with addiction. I sat down with Trae in advance of the group’s show at the Howlin’ Wolf this month to talk about the paradoxical nature of Deep South liberalism and— of course—cornbread.

So you’ve been doing stand-up on the side since 2010. Did you always intend for the “Liberal Redneck” to become a brand as it is today? Or is that something that came about more organically over time?
Trae Crowder: It was definitely organic, as that character is sort of who I really am. But I’ve always thought—from years of doing stand-up and talking with fellow comedians like Corey and Drew (the guys on tour with me now)— that there was an untapped appeal to it. I may be biased of course, but what I am as a comedian wasn’t really something that I had seen before. And I’m fortunate in that way, because it’s just something that comes really naturally to me.

How much of the character is really you and how much of it is a theatrical creation?
As a comedian or any kind of performer, you embellish and exaggerate, but what I’ve always said is that the Liberal Redneck is a character only in that it’s me cranked up to 11. I’m not that loud and aggressive and in-your-face in person. If I was, I’d be pretty hard to be around. But other than that, it’s pretty genuine. It all comes from a very genuine place. But no, I don’t just walk around in my day-to-day life looking and acting that way.

You’ve shared that the main reason for your more progressive views is having been raised by a father who was very close to his brother—your uncle—who is openly gay. Obviously they support your work, but how does the rest of your family feel about it? Has it caused friction at all?
On my dad’s side, it was basically just my dad, my grandparents, my uncle, and my sister. My uncle has no children and he and my dad had no other siblings. My grandpa passed away years ago and my dad passed away in 2013. So for immediate family it’s just my sister, my uncle, and my grandma. They’re all fully on board. My mom’s side of the family is huge, but I honestly don’t have a lot of contact with them anymore and my relationship with my mom is… complicated to say the least. I’m sure there are plenty of them who don’t like it at all, but it’s not like I have to see them at holidays.

So no fistfights over your bits at Thanksgiving dinner then?
No, not at all. Now, I do see my in-laws at the holidays and they’re classically conservative in that way. My wife, who aligns with me politically, is a bit of a black sheep in her family, so they just always know better than to ever ask either of us what we think about anything. But this year might be interesting. We’ll see!

As more and more Southerners feel comfortable talking about progressive stances, the more people will realize that we exist!

There seems to be a brewing movement amongst Southerners— primarily from outlets like Bitter Southerner and musicians like the Drive-by Truckers, Shovels & Rope, Jason Isbell etc.—that strives to be proud of Southern roots and heritage while standing against long-held stereotypes about what it means to be “Southern” to folks both within and outside the region. Does this make you feel like there might be more of us out there than anyone suspects?
I definitely think there are more of us than people think and that all those people you mentioned are a big part of it. I hope I’m a part of it now, too, and that it keeps growing in that way because as more and more Southerners feel comfortable talking about progressive stances, the more people will realize that we exist! I’ve met so many Southerners on this tour that feel like they have to hide their opinions to avoid conflict and that, in that way, they are essentially closeted. I don’t blame them for not speaking up, but I think that resistance to talking openly is part of why there is such a big problem with our perception. The people on the other end of the spectrum down here are some of the loudest people in this country. All they do is holler about what they think, so of course it drowns out everyone else.

How hard is it to convey the difficulty of towing the line between loving your Southernness and being politically progressive to audiences outside of the South? Patterson Hood calls it “the duality of the Southern thing”—can you really understand it if you haven’t lived it? You addressed it a little bit recently in your video “In Defense of Dixie.”
Frankly, they don’t really get it at all. But how could they? All they hear and see is the terrible shit. They have no emotional connection to this place, so it doesn’t make sense to them that we would defend it or care about it. We’ve talked to so many people from outside of the South on this tour that treat us as if we’re, like, defectors from North Korea or something.

I get that a lot, actually. The “I’m so sorry you had to grow up in that awful place!” and I always think “Well actually it wasn’t that bad…”
That’s exactly it. It’s like we’ve somehow escaped to their utopian, liberal paradise and we’re safe now and they want us to know it’s all going to be okay. [laughs]

On the flipside, how are you guys received in the Deep South? I don’t anticipate that anyone who staunchly disagrees with you would show up to anything billed with the word “liberal” in it. But have you come up against any heckling or backfire in live settings yet?
No real heckling, thankfully. The best shows we do are in the South, of course, because the audience not only gets the jokes, but they also get the dynamic we just talked about. They couldn’t be more on board. But yeah, sometimes someone will drag their husband or wife who isn’t politically aligned with them to the show. I guess people so far have been respectful enough of the loved ones they’ve come to the show with that they don’t make a big scene or storm out or yell at us. So far, that is!

Obviously the election has provided comedians with near-endless fodder for their acts this year. Do you worry that once the election is over and, God-willing, Trump is off in a corner licking his wounds, that you’ll run out of things to say?
Definitely not. I mean, I’ve been a comedian for six years now and it’s only recently that I started making the super-topical internet videos. I’m not at all worried that there will ever be a shortage of things to make fun of or be mad about in this country. Especially being a Southerner. We’ve come a long way, but we’ve got a long way to go, so I fully expect the state government of Tennessee to do some stupid shit before long that will get me fired up again. There will always be something.

Lastly, a fun question I always ask of fellow Southerners (I’m conducting a social experiment; it’s very important). Sugar in cornbread: yes or no?
I need to figure out whether my wife puts sugar in her cornbread before I can answer this. [laughs]

So what you’re saying is that your answer is “my wife’s cornbread?”
I mean, she won best cornbread in the Wayne County, Tennessee 4-H competition in like, 1999, so that shit’s pretty good.