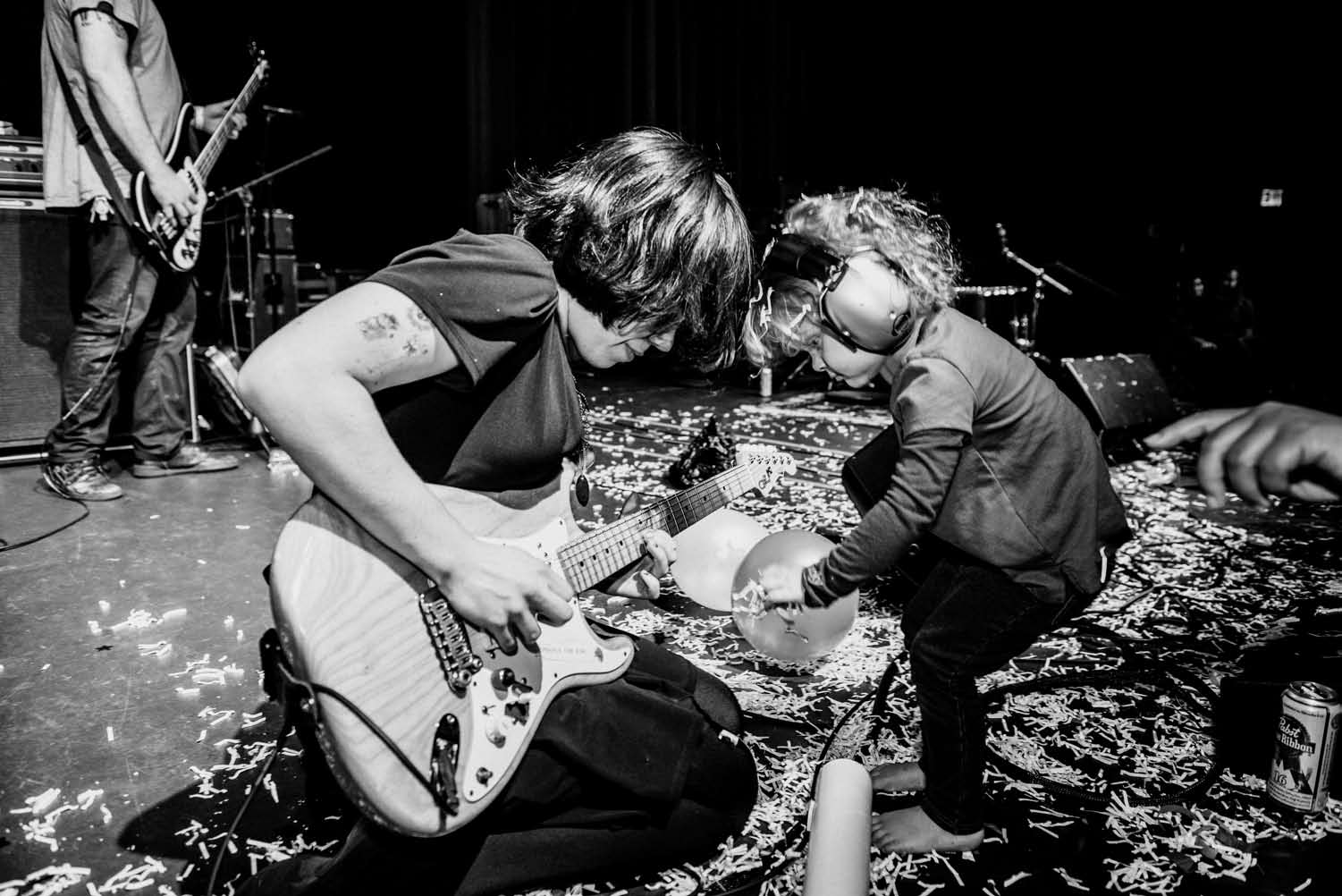 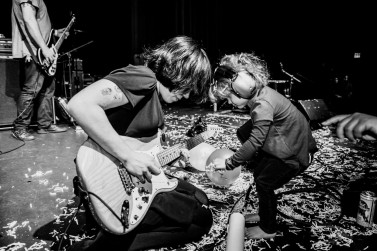 Maybe it was Kathleen Hanna who once said the best way to express appreciation for a band is to give them something you’ve made. You know, the rule of reciprocity. Seeing Screaming Females for the first time didn’t inspire me to run out and start writing furious psychedelic guitar solos. But I did write a column about the show, which I then cut out and passed to their bassist Mike the next time I saw them, at a show at the Zeitgeist. As soon as the paper left my hands an awkward self consciousness crept over me, and this was compounded by the fact that my tone can at times be ambiguous and cause for misunderstanding. Throughout the night I wondered if anything I’d written about Screaming Females could be construed as insulting. Then Hilary arranged to have them stay over at Nowe, and instead of detouring us through Central City, I led them straight into the throes of post-Saints-game debauchery. God, now they’re really gonna hate me, I thought, after 20 minutes  sitting still in the warehouse district. The story ends, anticlimactically, with us making it to my house half an hour later, followed by a brief tour of the building and the band going to sleep.

Skip to several months later. Screaming Females were playing the upstairs of the House of Blues with Vox and the Hound. Screaming Females’ drummer Jarrett would later recount walking up to find me “chilling backstage eating red beans and rice.” And I’ll neither confirm nor deny this allegation. What I will say is, this was a great show. Up to that point, I’d sorta gotten the vibe that Marissa, the vocalist/  guitar-sorceress portion of the band, was a little stand-offish. Not unfriendly, but not particularly loquacious either. Her persona had become shrouded in mystery—the performer who paradoxically sheds her meek, quiet exterior in an explosion of emotion once the show begins. This aura quickly dissipated, however, once she came and sat down at my little table. We’d exchanged only a few words up to this point, so I was pleasantly surprised to find us launching right in, obliterating any need for the usual ice-breakers. I don’t know how we got on the subject, but there we were, having an “OMG me too!” moment over our shared love of the ‘90s band Garbage. Little did I know they would eventually go on to share the stage with this legendary band!

Since their HOB show, I’ve been lucky enough to catch Screaming Females more times than I can count on one hand (not on their tour with Garbage, sadly). And even though they never got to play Nowe Miasto as planned (they cancelled that leg of tour due to Marissa getting mono), and even though I know they are only placating me every time I ask to go on tour with them, and the closest I may ever come to this dream is that ride home they gave me after the show in San Francisco, Screaming Females remains one of the few contemporary punk bands that I pay attention to.

Tell me about the formation of, and the scene that nurtured, Screaming Females. What were the first shows like that you played?

Marissa Paternoster: We began playing in 2005 in New Brunswick, New Jersey. New Brunswick is a college town but there isn’t much going on there in terms of the arts. Our first shows were all basement shows, thrown in people’s houses. That’s how we built the network of friends that we still stay in contact with to this day: throwing shows for touring bands in our hometown and then they’d pay it forward when we came through their home town.

\How much of this scene remains intact? Even though  you’ve re- located to Philadelphia, and you have a huge number of people who love you all over the world, does that  collection of people from the early days still feel like the support base for Screaming Females?

From what I’ve seen over the years, the New Brunswick scene ebbs and flows with the entry and exit of Rutgers  students. So the punk houses come and go, and sometimes the scene is more inactive than it has been in the past, but it has never ceased to exist. I still visit New Brunswick fairly often and set up shows there once in a while. It can be poisonous to hold on to the past too preciously, so I embrace the new faces. I’m happy and grateful that there are kids still willing to make their personal living spaces public for punk shows. 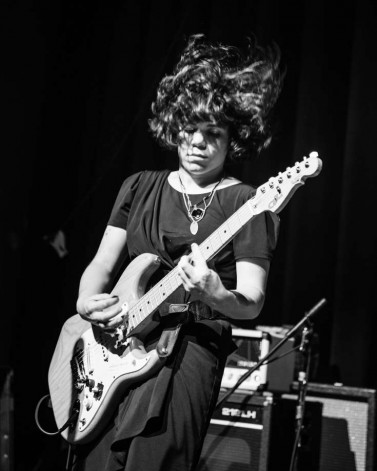 Let’s talk a little about the notion of “DIY.” I know you guys have a booking  agent. And you’re on a label that releases/distributes your records. And you toured with Garbage. Have any of the decisions you’ve had to make, as you’ve gained popularity as a band, ever been difficult to reconcile? Are there ever misgivings, any vague feelings of compromise?

Whenever we have to make big decisions on behalf of our band, we try to reach consensus and we take it very seriously. I think that we always maintain to keep in mind that our number one priority is to make engaging music, put on good shows, and keep ourselves physically and mentally fit. We are but three humans and there certainly came a point where the workload was too much. However, we are still deeply involved in all facets of Screaming Females and intend to do just that until the end. I am sure there have been times when relinquishing some of our control was difficult, but we only make decisions with the best intentions for our band, and if any purists want to poo-poo it that’s their prerogative and it’s okay by me.

On this tip, just this week I saw that you’re the cover story for Spin magazine. How’d that go? Have you begun to sense any kind of ripple effect, the stirrings of a “new era” for Screaming Females, in the wake of this kind of exposure? Or does it feel like par for the course at this point?

It went fine. I’m not sure if I feel any kind of new beginning peaking over the horizon. Maybe I’m too much in my own head.

Have you felt some awkwardness or discomfort with any attention paid you by mainstream press—how you’re portrayed, etc.?

Sure, often times I cringe when quotes get mangled or are taken out of context. But if I got bent out of shape every time that happened I’d be a hot mess. I don’t play music to prove my self-worth to other people. I do it because I enjoy it and it makes me feel fulfilled. I try not to take myself too seriously.

Can we back up a minute and talk a little about Garbage? I know that was some years ago now, but I remember at your House of Blues show in New Orleans just totally gushing  with you about how much we both love Garbage—and you kind of leaned in and whispered that you’d traded a couple emails with Shirley  Manson. Needless to say, I was still floored when I heard a few months later that you guys were sharing bills with them! How was that experience?

Haha, yes! Derek! It was awesome. Garbage was my very first favorite band when I was just beginning to listen to rock’n’roll. I was very sick with mono on our tour with Garbage, but it really was a wonderful trip and all of the band and crew were very gracious and kind to my band. I still value our friendship. Also, if you want, I can burn you a copy of my Garbage B-sides collection I burned off of Napster in 2001.

Hell yeah! You’ll have to pardon  my next question; I’ve been on a steady diet of Wired magazine the past week. How do you feel the pervasiveness of the internet has affected your band? I was thinking about how 20 years ago, the path for an indie band to attain any degree of prominence was restricted by all these gatekeepers—the music industry executives, the echelons of radio and MTV. Now there’s YouTube and these concepts like “crowdfunding.” Of course, any deserved recognition you’ve received is no doubt on account of your musical virtuosity and tireless touring—which in many ways is a timeless element of being any kind of artist. But I’m wondering: How do you think your situation would be different if Screaming Females were  playing in the pre-internet era?

Dealing with the constant influx of media, or content, or information—or whatever you want to call it—is hard. It’s like a fly buzzing around your head at a family picnic. It’s constant, it’s all consuming, and it’s hard to ignore. Sometimes it’s your job not to ignore it, and it’s hard to prioritize what things  merit your attention and what things do not. I never knew a world without internet, really, but it seems like things  moved at a more pleasant pace. I’m sure it’s all relative, but it’d be nice to have days in which we didn’t have to confront our virtual visages via iPhone or computer or whatever. I think that if we existed pre-internet era we’d have a really dope snail-mail fan club, à la the Misfits Fiend Club. That is my dream.

I guess  I want to ask a sort of highfalutin question. How do you define “success?” Have the benchmarks for success changed since you first began in 2005? Is there an acknowledgement of those benchmarks now in 2015 and perhaps the years to come?

I get to play music for a living and I consider that a success!

Something I’ve heard our friends in Thou talk about, and has made me consider for other  bands, is this idea of prioritizing releasing records—the body of work being the primary  project, rather than touring. Like Thou, you seem  to have a very consistent stylized aesthetic for all your releases; it’s something you’re obviously intentional about. I’m curious: Where  does Screaming Females stand, generally, on its agenda as a musical project? Has there been an emphasis on writing songs  for the purpose of performing them, or do you tend to think  of the live shows as a kind of rawer showcasing of the songs whose purer incarnations exist on the record?

I mean, with the exception of some of the songs on our EP “Chalk Tape” that we put out last year, nearly every Screaming Females song can be played live if we wished. We don’t typically write things that cannot be performed at a show. We don’t have any concrete agenda when it comes to songwriting besides to write good songs! That’s our main concern, I guess.

I asked you about this once, but I’d like to hear the answer again. Every time I’ve seen y’all play, you’ve donned your ceremonial garb: literally a dress for you, Marissa, and for Jarrett, the large bead necklace. What is the significance of this ritual?

Superhero outfits! They are magical talismans.

What’s next for Screaming Females? And when are you going to let this  little beast work his magic behind  your merch table?

Only if you hang out with me in the ladies room while we put on eyeliner  together!

Screaming Females play Gasa Gasa/ Sisters in Christ on March 15th (in support of their new album, Rose Mountain out on Don Giovanni), with Downtown Boys and HiGH opening. For more info, check out screamingfemales.com