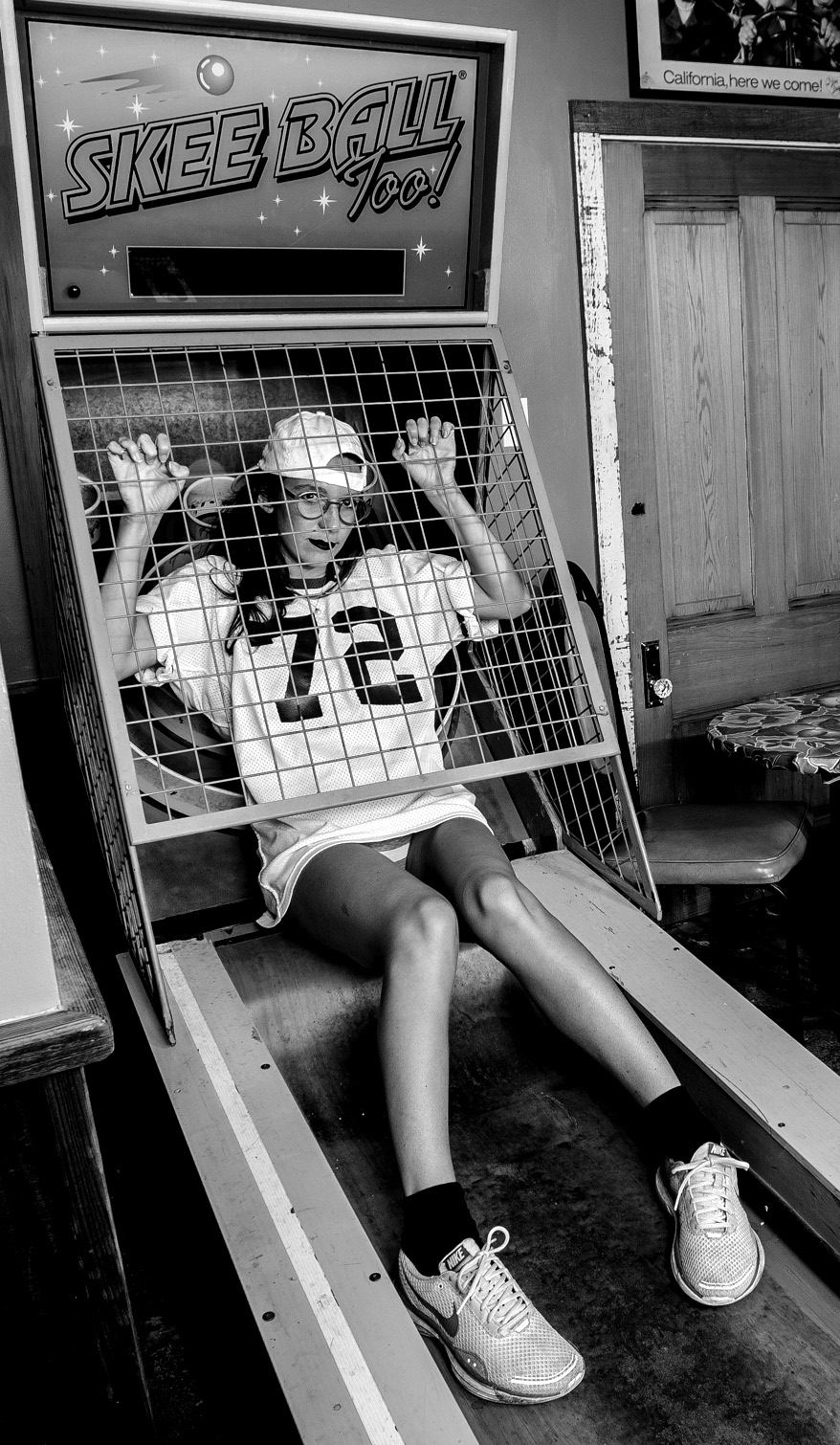 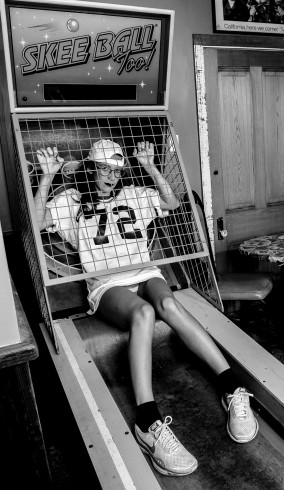 New Orleans-based femme fatale rapper Boyfriend has become quite the significant other both in the region, across the United States, and all over those blogs you can’t seem to hide from your newsfeed. Two years and counting of non-stop production has yielded over 20 music videos which have garnered attention from media hubs like Huffington Post to celebrity fans like Perez Hilton. Back from a national tour Boyfriend’s ready to talk about her upcoming release Love Your Boyfriend that will hit the web in October.

Boyfriend has a lot to offer and even more to reveal. Her Oprah-esque gift-giving at shows forces even the most unwilling to have a good time at her sharp witted cabaret style performances. On the stage Boyfriend is no stranger to shedding layers of clothing. With an English degree in her back pocket, listen closely to what she’s saying because there’s no doubt it will surprise you. We grabbed some Sunday dinner at the Hare Krishna temple and sat down to talk about where she’s headed.

First things first, what  brought you to create Boyfriend?

Boyfriend: I grew up in a family of songwriters, but I was always the  white collar sheep of the family.

I have a family of “black sheep.” They’re all artists and I had an office job. I worked in production with emails and phone calls and spreadsheets. But I’ve always been a creative. It was just brewing under the  surface. I got drunk a couple times in London and starting freestyling and realized I was kind of good at it. So I decided to write a real song, record a music video, and then I came out with “Hunch n Munch” in 2012.

What  made you choose to go by Boyfriend?

I wanted a name that evoked a feeling from everyone that heard it. Everyone has some sort of an opinion about that  word. Most people use that word if not on a daily basis then every other day. You either want one, love yours, or you’re jealous of his… ya know… boyfriend. I also like the possessive quality of it. People can say “That’s my Boyfriend.” Even if they don’t… ya know… have sex with me. They only see my videos. And of course the  gender ambiguity is a plus.

Speaking of music videos, you have  quite an extensive catalog of them. How many have you shot?

In 2012, I released seven videos. In 2013, I released thirteen—one a month—and then I did a lagniappe Christmas collab that’s actually on Sex Party’s channel.

Boyfriend, contextually speaking, seems reactionary to issues within our society like sex positivity or body positivity. What  influenced you to incorporate those things in your music?

It comes from my own experience. When I was in middle school or junior high I had a “type.” I don’t know if this was a universal experience, but  that’s what girls would talk about.  You had to pick a “type.” In my little  private Christian school we were trying to figure out these feelings of attraction so we categorized it. As I grew up and allowed myself to expand my spectrum of attraction, it opened up my eyes. Not just with men, but  also with women and with bodies and general. They’re beautiful. Some of that had to do with moving to New Orleans. In L.A. there’s a lot of tan, fit people walking around and it starts to get boring. Personally, the girls I’m attracted to you can grab on to. They’re not bean poles. I believe that  everyone’s capacity for attraction can expand; and that they haven’t tested it to see how beautiful people are. It sounds cliché but it’s just people— people are attractive. If you have a great energy about you, your energy  will be in synch with your form— viewing people as whole human beings  instead of as “someone with blonde  hair or blue eyes.”

Boyfriend has had some pretty unique media coverage. What’s been your favorite so far?

The Perez Hilton stuff is really cool because he’s actually picking stuff out that he likes and wants to promote. Whereas other sources like Bullet, Huffington Post, Earmilk are all super awesome, but they have a whole team of people. Especially sites like Huffington Post have an empire with a team of people. Of course it’s amazing for me to be able to say Huffington Post featured me, but it makes me feel special to know that Perez as an individual who happens to be a celebrity is tweeting about Boyfriend. Plus I got to go to his house. His bathroom was Madonna-themed and I share a birthday with Madonna. 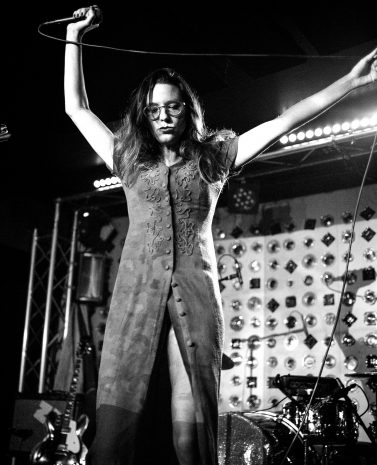 You just got back from a big tour  across the United States. Tell us about Boyfriend’s adventure.

It was great. I started off in New York and I played Joe’s Pub, which I’ve always wanted to play. It was interesting there because people sit at tables and drinks are brought to them cabaret style. I refer to my act  as “Rap cabaret” and there I was finally able to perform in a true cabaret setting. It was a bit of a dream come true.  Generally speaking, being on the road  was nice, but it was also really bad on my back—grandma style. Everything that I own is in two suitcases so I started taking great great pleasure in leaving items behind. In Portland, I left a sparkly green skirt. I performed in it then left it there. So in every city I would leave something behind as a sort of molting process. I gave each garment its moment… and then let it die there. Peace. Have a nice life. Bye.

How does Boyfriend entertain herself on those long long drives?

I tell people five to ten percent of being an artist is actually creating. The rest of it is phone calls, emails, and lists. I make meticulous lists—regional lists, categorical thematic lists, strategizing lists… always hustling and always reaching out to people. I noticed there’s an interesting dichotomy… like in Drake’s last album he says that  he’s on his grind and working really  hard, but he also says things like, “She just want to smoke and fuck; I said, ‘Girls that’s all that we do.’” For every line where he claims to work so hard there’s that contradiction of also saying, “Oh I just get to hang out all the time.” There is a weird expectation that all rappers have to be saying both  things at the same time. Why does it have to be one or the other? It’s a weird logical fallacy.

Now that  you are back from tour  what  is your next big move?

I have a new video for a song called “Jealousy.” Then I’ll release the EP and follow that with a string of singles  and videos. I’m sitting on a chunk of unused content that I’ve been waiting  to release, deferring it to the industry gods to rain fortune and favor upon us. I am also working on a collab EP. I want to work with some people and get some features going because Boyfriend has never really done that.  My goal is Luda. IM COMING FOR YOU, LUDA. Wonder how much a verse would cost me… 50 grand?  I think he’d be the best collab possible for Boyfriend. He is both respected for being very talented and serious, but also has such a sense of humor about him. That’s how I want people  to approach me as well. One of my struggles is people trying to cast me as a comedian, but no one would ever say that Luda and someone like Weird  Al should work together. But I can fucking spit so… 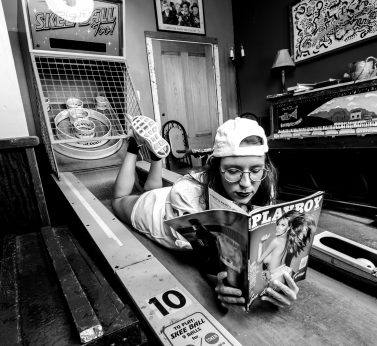 So Boyfriend’s ready to show her more  serious side. How does that  play into this new album?

Last summer, when I was doing my monthly video releases those were for the most part videos for songs that had long existed for me. But I want to tackle subjects that I haven’t yet, subjects that are much more  blatant than songs like “Cherokee” or “Like My Hand Did.” I decided to do something harder for me, which is to join in on the conversation about love. Virtually every song, book, tv show, or movie has been having this  conversation about love. For example, you can be in line at the bank and you also may be hearing a message about codependency over the radio. I started to tune in and decided that it was my turn to take on love and relationships. This also comes from listening to a lot of old albums. In my dad’s vinyl  collection he has a lot of Vikki Carr. My favorite album is It Must be Him. On my personal copy Vikki Carr has a mustache. My dad drew it on her. [laughs] The title track is about this moment where this woman is waiting  on the phone to ring and she says that  if it’s not him, she going to die. The song sounds so sweet, but you don’t think about what it’s really saying. If you listen, Rihanna’s saying the  exact same things about this female  need and codependency, the different definitions of love versus the actual  way we act love out. A lot of people,  when they say “I love you,” in a way are really saying “I own you.” There’s this idea of owing each other something. People use that word like a weapon instead of the freeing, liberating thing that it’s supposed to be. Long story short, the EP is called Love Your Boyfriend; it’s love songs in the key of aggression. I’ve described it as if Alanis Morissette did a rap album.

For more info on Boyfriend, check out boyfriend69.com/i>