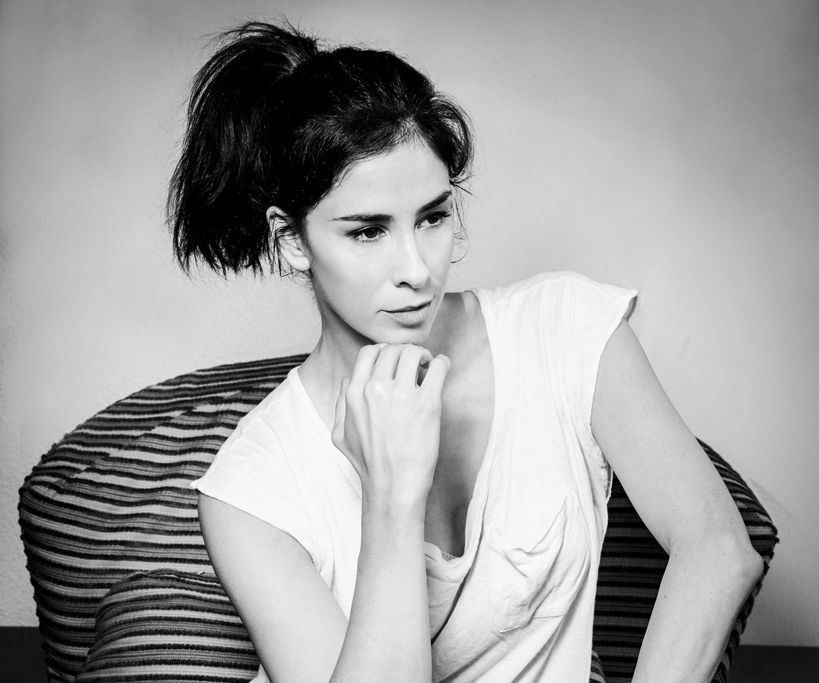 In the not-too-distant past, Sarah Silverman was making news for her comedic memoir about being a bedwetter well into her teens (appropriately titled TheBedwetter), as well as for comedy specials which showcase her genius ability to mesh vulnerable slice-of-life anecdotes with commentary on current events. While other comics make a practice of hauling around a suitcase filled with the same five fart jokes for years, Silverman is constantly coming up with new material. In 2014’s We Are Miracles she even figured out a way to make the word “pussy” scandalous again–after losing some of its luster for her—by pronouncing it with a lisp through puffed up cheeks like this: puuuuuthy. Lately, she’s been getting award nods for her effectively traumatizing role as a mother suffering addiction in 2015’s I Smile Back, or giving speeches encouraging people to vote for Bernie, and now Hillary. I was lucky enough to get 15 minutes on the phone with Silverman, which isn’t nearly enough, considering all she’s done and all I had to ask. I didn’t get to ask what her favorite snack is after hitting the vape, a pastime she doesn’t try to keep at all secret. But at the very last minute, I did remember to ask for hints as to what we can expect from her headlining performance at this month’s Hell Yes Fest.

Hi, Sarah. I have to let you know that I bought a box of pizza rolls and some sparkling rosé as a treat for myself after this interview because it’s a really big deal for me.

Sarah Silverman: [Laughs] That’s so funny. You needed a treat!

Doing research for this interview, I was watching a clip of you on Letterman and I glanced over to the side of the YouTube page where they have the list of “other videos you should watch,” and there was one titled “Sarah Silverman is surprisingly intelligent.” Why do you think people have such a hard time believing women can be funny and smart at the same time?
I don’t know. I’m not inside those types of people’s heads. I think it has something to do with a combination of how they were raised, their life experience, and also the world we live in. But it’s very interesting, and it’s not uncommon. But it’s less and less common. You know though, they probably meant it as a compliment and I get this all the time where people will say “you’re my favorite female comedian.” And I’m like “oh! Thank you! Who’s your favorite BLACK comedian?”

That’s my very next question: what are some things that go through your head when you read a comedian being referred to in the press, or on social media, as a “female comedian?”
It’s how some people need to digest things. It’s kind of the last vestige of that same thing like, “oh, this is your black lawyer, or your female lawyer.” Seems like you could just say lawyer. But then there are other times I guess when pointing it out brings a positive awareness. I don’t know. And luckily I don’t have to know. Wherever that’s coming from, that’s theirs. That’s not mine.

I can imagine that your support of Bernie Sanders, and now Hillary Clinton, has inspired a lot of young voters to get involved with the upcoming election. Have you always been involved in politics or is there something particularly terrifying about this election that caused you to become more involved?
My family has always been an active family. I’m from New Hampshire, so there’s an element in that just because New Hampshire is the first primary or whatever. All the candidates always come through my home town. My mom was a photographer for the McGovern campaign in ‘72 when I was just born and her jewelry box was filled with political buttons. And my dad has always been active, so it’s not like some celebrity thing. My family has always been active citizens. I’ve just continued doing that, and I have a lot more visibility and I try to use it in positive ways.

What do you think about PneumoniaGate 2016?
I think it’s low frequency stuff to use somebody’s health against them. It’s bad karma shit. I think she’s [Hillary Clinton] very strong and I’m not worried about her health. I mean, I hope that she is healthy and I wish her the best and every single member of the GOP should do the same. That’s some bad karma stuff to get a boner over someone’s bad health. Sometimes, something that I do—that I think the Republican representatives don’t do—is I go, alright, how would I feel if it was the other way around? And that’s how I try to keep myself honest and not like, am I just being us vs. them, like Red Sox vs. Yankees team mentalities? Trump, I think I can say definitively, has wild arrested development. He’s a baby—literally, in a lot of ways— and it’s disconcerting. I don’t have a good feeling about any upcoming diplomacy he would have as a president. I feel bad for him as a child who is grown (like we all are), but yeah, he’s a super bummer. His sons are too. If you need to pay money to kill a wild animal then something is terribly wrong with your insides.

I recently re-watched your episode of Jerry Seinfeld’s Comedians in Cars Getting Coffee and there’s a part where you mention how people seem to like saying gross stuff to you because they just assume you’ll like it. Can you recall a recent time when that happened where you were like “why is this happening to me?”
I’m sure as soon as we hang up I’ll think of three examples. In some ways, I feel very lucky because people find me very familiar. And that has kind of a double-edged sword because it’s nice that they feel like they know me and tend to open up almost immediately. That’s very flattering to me. I like that I bring that kind of comfort to strangers, but also it can be gross and scary and it’s also why I have a straight-up fear of drunk people. They get grabby and familiar and they act like we’re old friends. All their insecurities come out and if I look at them in any sort of way they’re like “WHAT?! WHAT!?” If you saw Nicole Kidman you’d be like [whispers] “Oh, I think that’s Nicole Kidman.” Me, they’re like “SARAH!!!” I love it, but it can also be a little bit of a burden when I’m alone at the gate at Southwest. But yeah, people will tell me about their shit or their gross sex stuff, and I don’t wanna make them feel weird or anything so I’ll just be like “that’s great!” I’m much more prudish off-stage. And I don’t think of myself as gross or something, I just like to talk about true things.

And I don’t think of myself as gross or something, I just like to talk about true things.

Talking about familiarity, I know you recently suffered one of the worst familial losses that a person can go through with the passing of your mom this past August. You’ve been posting some really touching things on social media and one I found particularly moving was a video your mom sent you after finding your hat that had been left behind.
I’m wearing it now!

How does it affect your overall grieving process when strangers chime in on these things with their own stories?
I wouldn’t post it if it wasn’t something that I wanted shared. Loss makes us human and it has been really comforting and really nice in a lot of ways to hear other people’s stories. Those are the things that I find really beautiful about social media and how it’s made the world so much smaller just by shared experience. It’s been a really nice way to process.

You can catch Sarah Silverman during Hell Yes Fest on October 16th at the Saenger Theatre. For more info, check out hellyesfest.com