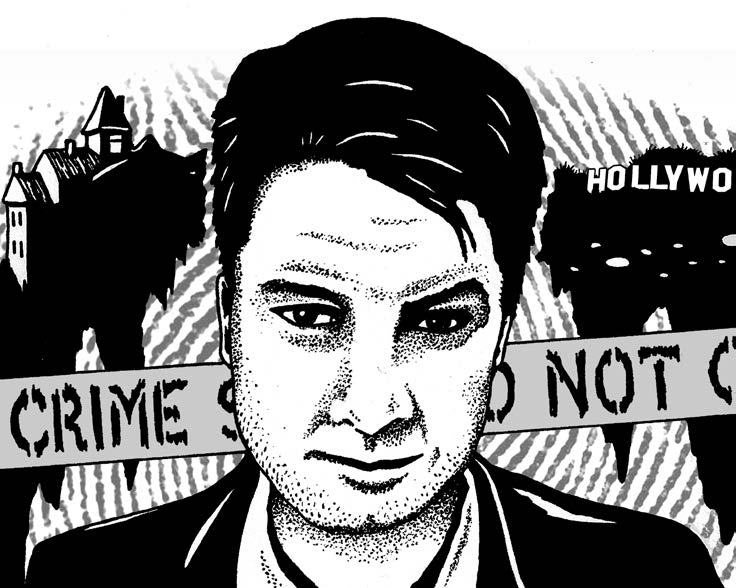 About 12 years ago I was peeping through the film/television section at Barnes & Noble and came across a perhaps misplaced true crime book that was right up my alley: Hollywood Death Scenes: True Crime and Tragedy in Paradise. I had no choice but to buy it and immediately read it cover to cover. It kind of felt like watching a series of A&E crime documentaries all held together with a smooth and effortless  narrator. Through the subtext I was able to tell that I had a lot in common with the author, Corey Mitchell, by his subtle morbid pop culture references.

When Corey teamed up with Philip Anselmo to create the Housecore Horror Festival, I realized I really did have a lot in common with him. He was bringing one of my favorite bands, Goblin, to the US for the first time! And several of my favorite  exploitation and horror film directors! After reading into it further, I began to realize just how committed he was to whatever he put his mind to. I knew there had to be some serious dedication and passion involved to pull together such an eclectic assortment of international filmmakers and musicians.

After having a complete blast at the first festival I couldn’t wait for the promised second year. Sure enough, the lineup for 2014 was another insane collection of horror greats that could only leave one wondering how the fuck? I caught Corey doing introductions for a few acts and I remember thinking there’s the man. He seemed like a kid on Christmas as he enjoyed this enormous collaboration that he had worked so hard to create.

The trip back to New Orleans from Austin Monday morning was a very hung over one, but I was in awe of the great weekend I just experienced. The relentless efforts of Corey, Phil, and their team all added up to be the perfect playground for me. About two hours into the ride back I randomly popped on Facebook and discovered that Corey had passed away that morning. He had a heart attack while wrapping  things up at the festival’s main venue, Emo’s. At first, it was impossible to believe but the more I read about it as details were released the more it sunk in. This was no hoax.

He lives on through his work and I couldn’t recommend his books enough. Several of his best selling works, such as Evil Eyes (2006) and Pure Murder (2008) depict  true crime stories from his home state of Texas, where he began carving his niche in the music world with radio station experience and band management. He also delved into filmmaking as music supervisor for the 2013 film Black Metal, which was one of few selected short films at Sundance. Previously a horror film festival blogger for Bloody Disgusting, he went on to write and edit for the infamous Metal Sucks website, which features all of his contributions for your reading pleasure. Yet to be released, he co-authored an autobiography of Philip Anselmo entitled Mouth For War: Pantera And Beyond. Keep your eyes peeled for that in the months to come.

As I wrap this up listening to Goblin at 4:20 in the morning, I can’t help but want to shake the hand of the guy that made it possible for me to see them live… Corey Richard Mitchell. Thanks man!