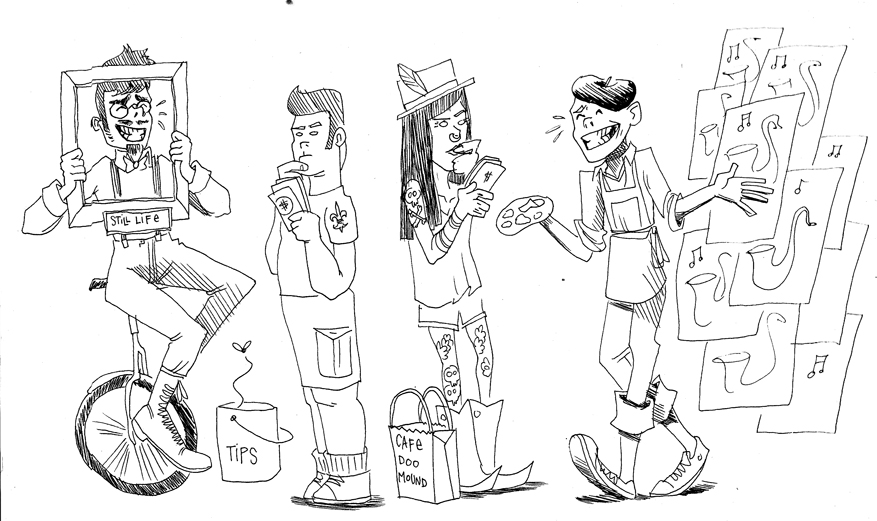 Since the 1700s, the city of New Orleans has controlled the borders of present-day Jackson Square. Both the physical design and municipal functions of the famed Square have ranged from convent to city prison. Known as the Place d’Armes in the 18th and 19th centuries, a row of stocks existed exactly where artists today hang their canvases. Those arrested for petty crimes were sent there to be shamed, ogled, and ridiculed by law-abiding citizens. In the late 19th century, painters spontaneously assembled outside the gates, using the street as a communal open-air studio. Aspiring amateurs observed skillful masters at work, in hopes that their canvases would one day attract the eye of a wealthy patron.

Visiting the artists lining Decatur Street today, you’ll find a host of uppity historical gatekeepers, realists who will talk to you straight about the tourist hustle, and bullies, wing-men, idealists, and whack jobs.

The current conflation of Jackson Square with an “artist colony” serves the tourism industry while allowing policing of creative industries. The Louisiana Office of Tourism touts colorful photos of Jackson Square’s bohemian community. Visitors are enticed to peek into the lives of real artists, musicians, and performers. For $175 and luck in the lottery system, each artist is allotted a 20-foot by 13-foot patch of sidewalk. The French Market Corporation issues permits for street performers, renewable upon payment every six months during a designated renewal timeframe.

I started researching the history of artist policing in Jackson Square after Dade Murphy, a human statue operating in the Square, wrote to ANTIGRAVITY in June. He’s been embroiled in a nasty turf war with two painters over the right to occupy a public bench at the corner of St. Ann and Decatur Streets, writing to the magazine, “The artists with permits have been harassing me and calling the police, claiming that I am not allowed to perform within their slotted permit space.”

I called Dade, who began our first two hour phone conversation by describing himself. “I’m the living statue who does the leaning backward thing. You’ve probably seen me.”

To clarify, “Dade Murphy” is a moniker taken from a character in the 1995 film Hackers. Eliciting shock, pleasure, and disbelief from crowds over his ability to remain stone-still in uncanny positions “is like hacking their minds,” the street performer said. Two years ago, Dade trekked south from Asheville, North Carolina at the urging of a seasoned French Quarter busker, who promised him a captive audience, creative community, and good money. For Dade, making a living depends on his ability to perform in outdoor public spaces with high visibility. While musicians’ tunes can solicit crowds from near and far, the artists, living statues, and other street performers of the French Quarter depend entirely on direct foot traffic. Dade’s battle is essentially a competition to stand in the resplendent light of the tourist gaze.

Dade’s saga is well-known among the Jackson Square artist community. The bench in question sits in the middle of prime territory for visual artists and performers alike. Foot traffic is heavy and the nearby business owners are friendly to the creatives. From January until July of this year, Dade and his partner covered themselves in gold paint and sat on the bench, reading newspapers or positioning themselves in comical exchanges. Their performance obscured a direct line of sight to canvases hanging on the fence belonging to artist Barbara Yochum. She asked them to leave, citing the terms of their city permits that allow each artist a display area of 20 feet out from the fence. The bench was inside the designated 20 feet. Dade and his partner insisted that the bench was property of the city and therefore free for public use. According to Dade, Yochum and several other artists began to “gang up” on him, resulting in mutual sabotage of visibility and personal space using tupperware, cardboard boxes, tarps, and umbrellas. 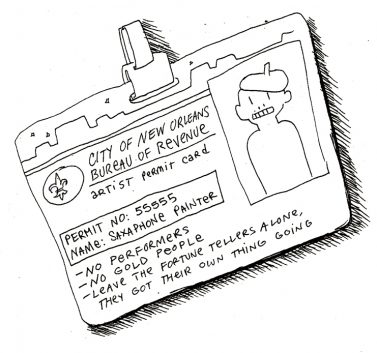 Yochum says that she fears for her safety more than her property. At 77 years old, she’s seen her fair share of hostility in the Square. “This is an unusual incident,” she says. “He threatened my life, told me to watch out if I’m ever in the Square after dark. I’m afraid he’ll hurt me, I really am.”

Over the course of several months, New Orleans Police Department (NOPD) and French Market Corporation Security responded to a series of he-said-she-said calls over destruction of private property, disturbance of the peace, and artist permit violations. “Law enforcement doesn’t want to deal with it,” she continues. “The cops don’t give a damn. It’s not just that they don’t know the policies. This officer didn’t want to get involved in anything. Officers in the past have taken care of us and didn’t let people mess with us.”

The hostility finally escalated into a fist fight. Dade was charged for simple battery. He and two of the artists, including Yochum, received a municipal court summons. During his testimony, Dade walked out of the courtroom, cursing police commander Jeffrey Walls of the 8th District, and swearing to defend his honor and his rights to the death.

Living statues, fire jugglers, sword swallowers, dancers, and carriage drivers may seem like benign novelties, but are often nuisances to permit-holding artists. The tension is nothing new.

To the exhibiting artists, the significance of the case went beyond personal vindication. Space for visitors to interact with art is crucial. Living statues, fire jugglers, sword swallowers, dancers, and carriage drivers may seem like benign novelties, but are often nuisances to permit-holding artists. The tension is nothing new.

I talked with other Jackson Square artists, asking if they looked out for each other, if they felt the city permitting system was oppressive or helpful and specifically, if they ever felt that they needed to defend their space against living statues. They knew I was referencing Dade, and shook their heads over the ordeal. “The skirmishes are making us look bad to the city, who ultimately has a lot of control over our permits. At any point, they could take steps to shut us down. They’ll only fight a war of attrition with each other,” said Jackson Square artist Lance Vargas (a.k.a. Varg).

“When you’re buying a piece of art, you spend time with it,” Varg continued. “There’s a moment of intimacy that you have to have with it. You look at it, talk to your spouse, partner, or friend about it. There’s a chemistry there. A street performer threatening an artist’s space can destroy that moment, that seduction.”

In the 1970s, artists and silent performers wrote their own etiquette agreement. Older artists and performers proudly adhere to this code of mutual respect for each others’ space and craft. Though there was once a joint French Quarter artist and musician union, there is now only a citywide musicians union. Collective bargaining (and complaining) by informal groups of artists over the course of the 20th century resulted in the current permitting system. First limited to 14 foot parcels on the front fence (“A” artists), permitted space eventually grew to the sides of Jackson Square, Pirate Alley, and Royal Street (“B” artists). Over the years, artists have enlisted help from NOPD to herd fortune tellers and performers to other areas surrounding the Square. Now it seems that everyone knows their place.

The relationship of Jackson Square artists to each other and to the City of New Orleans is complicated. Not only is the space regulated, but artwork itself is subject to municipal scrutiny and approval. In 2011, Yochum and two other Jackson Square artists sued the city for the right to sell prints in addition to original canvases. For years, the city prohibited the sale of prints, warning that increased sales of cheaper prints would drive out other artists selling originals. This rule was enforced under the tout ensemble (general effect) doctrine of 1941, a clause meant to aid the Vieux Carré Commission in architectural preservation work. Unfortunately, tout ensemble is vague and subjective enough of a term to keep Jackson Square artists and performers beholden to the decisions of city administrators. This time, the judge ruled in favor of the artists on an appeal, explaining that the sale of prints does not threaten the existence of Jackson Square’s vibrant “artist colony” and “is in fact a justification for the slogan, America’s Most Interesting City.” The policy change would not detract from the tout ensemble of the French Quarter.

The Jackson Square artist colony coalesces under municipal permissions. Permits are coveted, and artists who don’t exhibit outdoors anymore may retain them “just in case.” Touted as a charming community of creatives by tourist guides and city officials, it seems that today’s artists must not just be lawfully-operating businesspeople, but good neighbors. One artist, who wishes to remain anonymous, feels differently about coherence and a sense of community amongst the artists. “An artist colony? No way. All the artists hate each other,” he laughed. “There are cliques and infighting. Like petty office drama. I’m one of the hated ones. For the most part, the artists get along with the street performers better than with each other. We’re drinking buddies.” He tells me that he’s just “passing through,” that most of the artists have something bigger going on to support themselves.

A previous employee of Blaine Kern’s Mardi Gras World, the artist confided, “Mardi Gras and all this tourism is a business, not an art form. The business owners make all the money and the artists are still trying to put food on the table. The best thing I learned from working at Mardi Gras World was how to make a product as quickly as possible that tourists would buy.”

Though Yochum refuses to “paint $20 fleur de lis and jazz guys leaning against lamp posts” she agrees that at the end of the day, the artists, card readers, and entertainers are the little guys. “We’re not out here to be decorations! This is my job and I need this money! The rich screw the poor. No one likes to talk about us in terms of social or economic justice. I didn’t imagine that growing old would be like this, but I need to pay my mortgage. As long as I can keep working, I’ll be fine.” 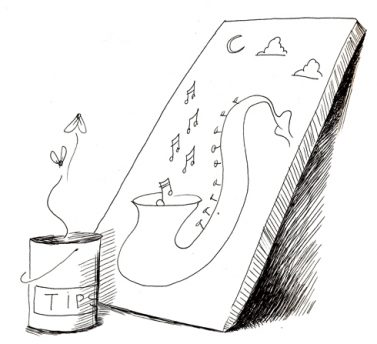 365 days a year, countless visitors immerse themselves in the circuslike tableau for a few hours at a time. The artists and performers pass through, too. Each day they appear at 5 a.m., then disappear at 6 p.m. They scramble to get the “best” spots and reserve patches of sidewalk with signs. Performers migrate around the Quarter in search of appreciative crowds. The artists we see in last year’s travel guide may already be on their way to commercial licensing deals, gallery proprietorship, or private studio practice.

As for Dade, he returned to North Carolina to regroup and plot his return later this year to reclaim the bench. But he neglected one important fact: in Jackson Square, tourism never takes time off.