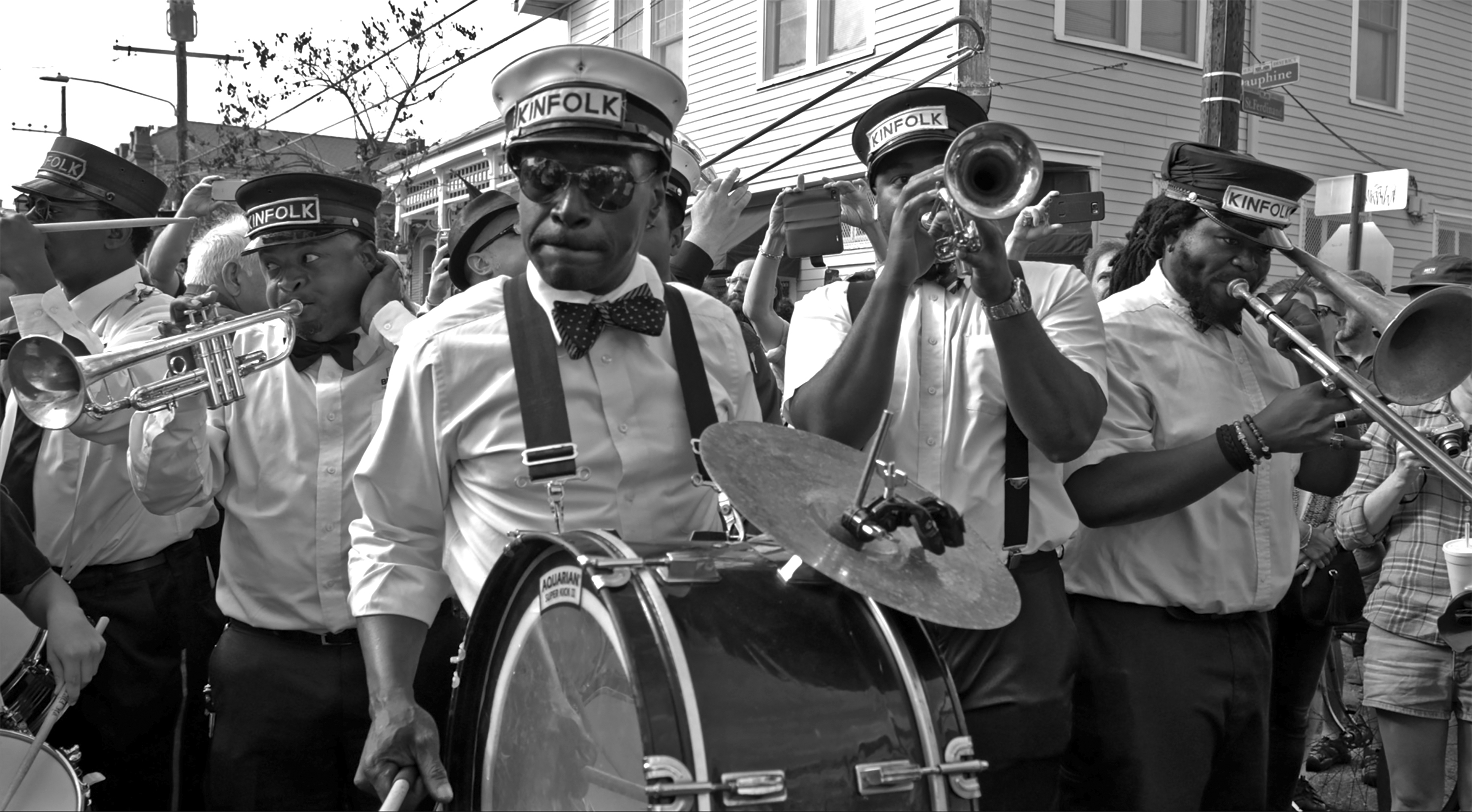 Up From The Streets follows the extensive history of New Orleans music, ranging from the days when slaves played drums in Congo Square to modern booty-shaking bounce. This film, hosted by Terence Blanchard, largely revolves around musician interviews, allowing culture bearers to speak about the culture themselves. The documentary sports insights from a who’s who of New Orleans music, including since-passed legends like Allen Toussaint, Art Neville, and Earl Palmer. Big names like Robert Plant and Keith Richards also appear but do not overpower the local-centric narrative. Up From The Streets comprises many interconnected short sections, each focusing on a particular artist or period in the city’s musical history. By marrying these stories, the film shows how New Orleans musicians throughout time have innovated while also constantly building upon what came before them. These stories are interspersed with snippets of performance footage, much of which was recorded for this film. Some highlights include Allen Toussaint’s “Yes We Can” and the Neville Brothers’ “Yellow Moon.” Fans will surely argue over omissions but Up From The Streets does an impressive job of telling this history in a way that will interest both new fans and life-long devotees of the New Orleans sounds.

Up From The Streets primarily revolves around musicians’ reflections on New Orleans and its musical history. How important was it for this film to emphasize their insights?

Extremely important. New Orleans is a city of storytellers, which is how we have passed down our history (good and bad) and our traditions. Their insights are a critical part in understanding the evolution of their music, and our culture. The film shows that music is an expression—of joy, protest, sadness, love, etc. The reason that this expression became so powerful is that it is not just a collection of words and notes, it is that combined with life experiences past and present. To hear musicians talk about their experiences gives a better understanding of the historical, social, and cultural basis of the music.

While making this film, how did your understanding of New Orleans’ musical history change?

Being from New Orleans, I grew up surrounded by music. Having spent decades filming interviews and performances of our artists, I learned a lot about our music history. With that said, interviewing Raj Smoove, Mannie Fresh, PJ Morton, and Big Freedia opened my eyes to the connections and lineage of bounce music back to the rhythms and beats of the Mardi Gras Indians and brass bands that have marched on the streets of New Orleans for generations.

This film covers hundreds of years of musical changes in New Orleans in less than two hours. What were some of the most difficult things to omit?

We needed to keep the running time of the film to less than two hours, so there were topics we just couldn’t cover in the film. Selecting the statements from the interviews we filmed recently, plus those we filmed 15 to 20 years ago, required countless hours of reading transcripts and editing. We wished we could have had the funding to create a multi-episode story, which would have allowed us to tell the stories of New Orleans families of music, including but not limited to: Barbarin, Batiste, Boutte, DeJean, Jordan, and Lastie.

A few of the interviews featured in the film date back to 2004. How long were you working on this film and how did the focus change during that process?

Some of the interviews we used in the film go much further. We started making this film in 2014 but used the experience of spending decades of talking to and filming artists to tell the story. Once we started the film, our focus didn’t really change. We had a 27-page outline we wanted to explore and the film pretty much followed that outline.

You’ve spent decades doing film work related to New Orleans music. How differently would you have approached this project if you had made it early in your career?

The knowledge and experience I have gained in my career enabled me to feel confident that I could make the film. Earlier in my career, I would not have been able to map out the storyline as comprehensively. And I would not have had the same trust of the musicians as I now have.

How difficult was it to sculpt a comprehensive historical narrative for the city’s music that appeals to both lifelong fans and curious newcomers?

It was a very laborious undertaking because I was doing a film about my hometown, a city loved by millions of fans around the world. I knew I had to pay tribute to some of our iconic artists that have passed while also showing how our music is evolving and still very relevant as each new generation of musicians takes their music to the world. And I wanted it to be a film that was also telling a story about the struggle for social justice that so many of our musicians and citizens of New Orleans experienced. The current film, meaning the one we submitted to The New Orleans Film Festival, is version 35. That pretty much sums up the challenges we faced.

One thing mentioned in the film is that even since the days of Louis Armstrong and Jelly Roll Morton, New Orleans musicians have had to leave town to find the success they wanted. Do you think that will ever change?

That is a difficult question to answer because it is tied to the economy of our city and the individual chosen lifestyle of our musicians. Some musicians chose not to move, but tour so that they can earn enough money to support a family, buy a home, or pay for children’s education, which is a daunting challenge if the cost of living expenses are based solely on playing local gigs. Others chose to leave because they feel that they want to expand on their musical knowledge outside of the city. I can’t say whether it will change; however, there is an active movement in the city that is working from both the musician side and the business side to develop a city-wide support system for this important part of our culture. In any case, even those who move away continue to be New Orleanians wherever they live.

Up From The Streets will be screening on Saturday, October 19 at the Orpheum Theater. For more information about the film, check out facebook.com/upfromthestreetsnola. For more info and up-to-date info on the New Orleans Film Festival, check out neworleansfilmsociety.org