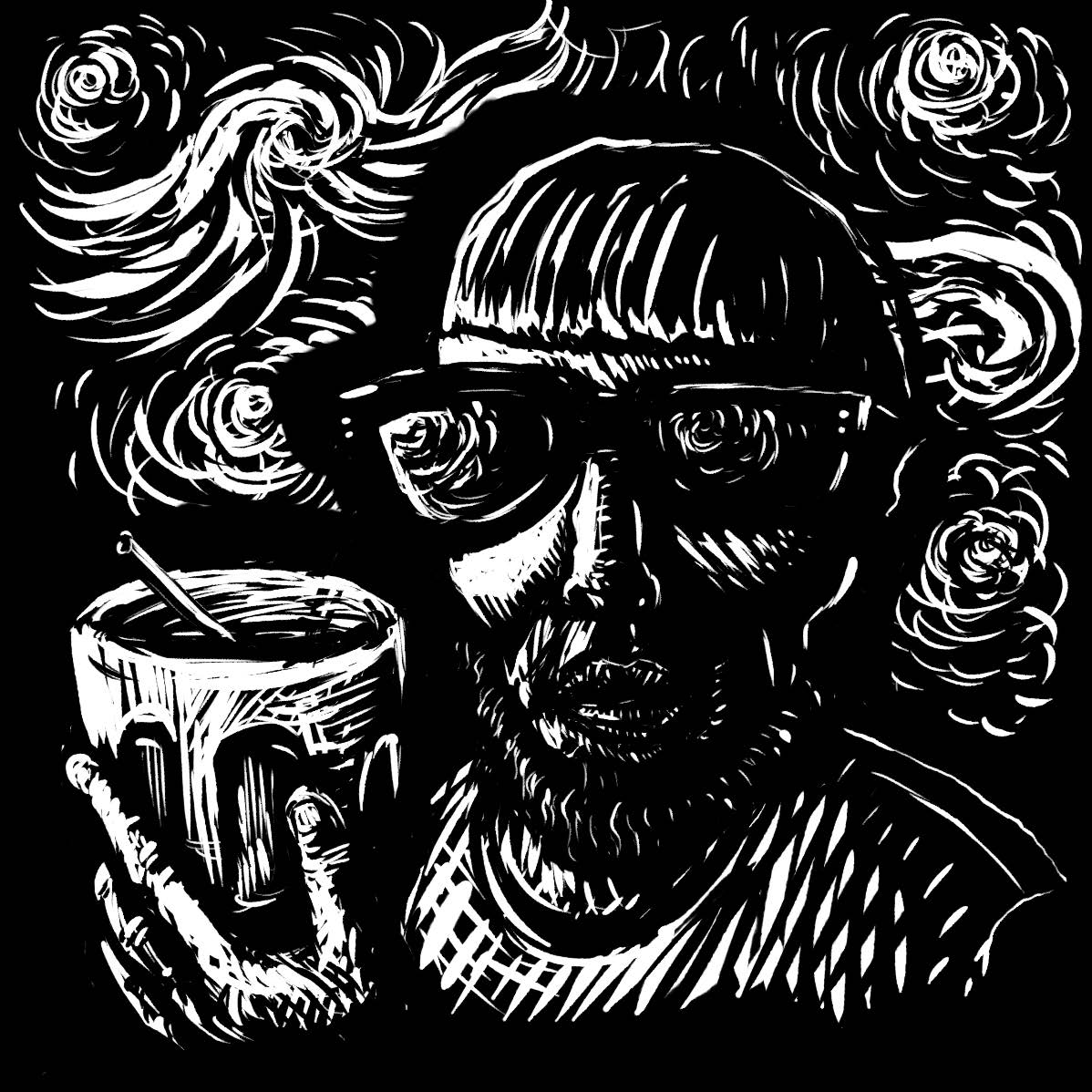 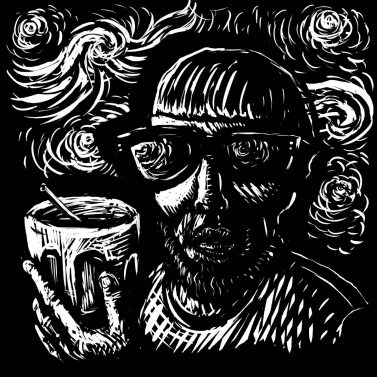 DAN’S HUMMUS
Someone recently told me they wanted to swim in my hummus; I don’t know what’s so special about it but I have been making this dish for a long time, ever since my days as a high school vegetarian-warrior cook. It’s a staple appetizer at my parties and also a welcome addition to potlucks.

Take your drained garbanzos and put them in a blender, hopefully something like the Cuisinart I inherited from my grandparents (that thing has a diesel motor in it or something). Dollop your tahini on top, along with some salt and pepper, olive oil and the juice of one lemon. Start blending. Now the trick is, as the hummus starts to form, to keep pouring olive oil in as it’s processing. Once you feel you’ve poured enough oil in, keep going for another 10 seconds. I usually season the hummus a little more while it’s still circle pitting. Serve on a large, slightly concave plate or wide bowl and cut ridges and valleys into the top with a spatula. Drizzle more olive oil and lemon juice and dash on the paprika. And like that, you’re transported to a far-away place, like Mona’s on Banks street (whose hummus is still the best in NOLA). Serve with toast points, pita chips, bagels or veggies. Or swim in it. —Dan Fox 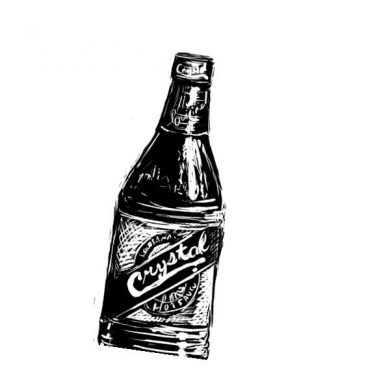 ZILKER FAMILY WHISKEY SOUR
My mom’s family made these every Christmas morning. They’re a great beverage for any festive occasion. I’ve seen some recipes call this a Boston sour, due to the addition of egg white. I’ve never seen any other recipe, though, that calls for frozen lemonade. The batch is easily proportioned by using the can of lemonade as a measuring cup.

Ingredients:
1 can (any size) frozen lemonade concentrate
1 can whiskey (I use Jameson, the family has traditionally used Evan Williams)
1 can water
1 can ice cubes
2 tbsp powdered sugar
1 egg white

Process:
Combine all ingredients in a blender and blend til the ice cubes are crushed down to pea-sized or smaller. Serve in wine glasses. —Rev. Dan Jackson 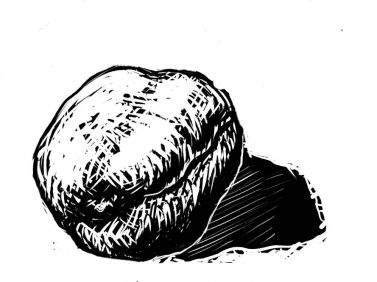 BUFFALO CHICKEN POBOY
This is an outrageously delicious sandwich and when prepared properly, will give the sloppiest roast beef poboy a run for its money. You will need a whole bunch of napkins.

Prepare chicken tenders as directed, making sure they get extra crispy. While chicken is cooking, melt the butter and add 8 oz (1 cup) of the hot sauce, whisking to combine. Taste, and add more hot sauce for more zing. Split the bread open and dress each side generously with the blue cheese dressing, then layer the arugula and tomato on the bottom half. Once the chicken is done, toss it in the sauce, then shingle the tenders on top of the tomatoes, allowing them to overlap slightly. Add the crumbly blue cheese and onions if you desire. Lightly press the top half of bread on the sandwich. Cut into portions and chow down.

Feel free to mess around with homemade blue cheese dressing, different greens, alternate hot sauces, hand-breaded chicken, etc. But never, under any circumstances, should you even toy with the idea of using Tabasco sauce. —Rev. Dan Jackson 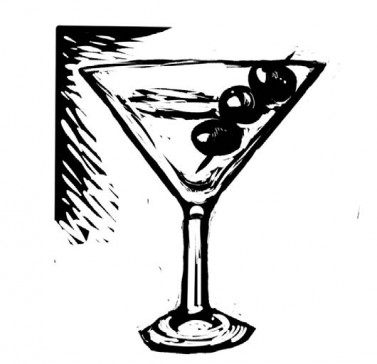 HIPSTERPOLITAN
My friend and blogger over at New Orleans Slate (nolaslate.blogspot.com) overheard a college student at Vaughan’s ordering an “absinthe and cran” one night. When the bartender recovered from his double-take, he said he didn’t have the absinthe. That’ll be one problem in trying to have this concoction at most bars in the area, but when you go to places like Cure or Perestroika, instruct them in the makings of this:

Don’t stir it up, as the effect of the cranberry juice cutting the extreme anise fl avor of the absinthe will be nil. It makes for a frothy pink drink you can shock mixologists with and still get a deceptively mighty buzz on. Over time, one can also refer to it as a crapsinthe (all credit for the name is due to Kevin Allman). —Leigh Checkman

DISASTER
If you like Jaegermeister (and who doesn’t?), I highly recommend trying it with orange juice and here’s why: The acidity of the orange juice takes some major power off the nasty bitterness of the Jaeger. This drink looks like bloody mud or muddy blood, both really. Don’t worry about coming up with some cute name for it—nothing will fit or make any sense. When you see it, it looks like it oozed out of some middle earth creature’s genitals. Bartenders will never forget it and they’ll remember what you’re having all night. It’s actually really delicious; if you like mild licorice and you like orange juice, it’s the ticket. 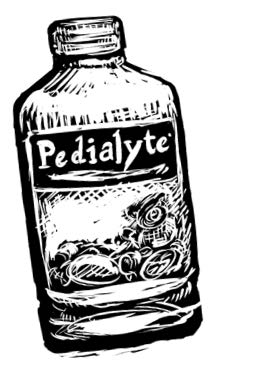 RECUPERATION
Now that you are thoroughly destroyed, I’m going to save your life. Make sure this Mardi Gras that you have at least one bottle of Pedialyte—per night, per person—in your household (or its off-brand counterpart). It’s in the baby section of the drugstore or grocery store. It ain’t that cheap ($5 a quart) but it is a never-fail. Forget all those dumbass remedies your father’s brother’s best drinking buddy from college told him and he told you: “Eat a raw egg in a paper bag while taking a cold shower, then drink a shot of whiskey over frozen peas!” Stupid.

You are dehydrated way beyond water after boozing it up and sports drinks have too much sweetener, which is a dehydrant itself (that’s why you want more of the dumb, bright-colored shit after you drink it). Energy drinks will just make you shit yourself with the hangover and then give you the shakes. Pedialyte is the next best thing to an IV. Pop a pain reliever and down a whole quart all in one and boom—you are ready to motherfuckin roll just as hard. I shit you not, this secret was handed down from New Orleans’ rock party beast Philip Anselmo himself and I’m sure some other rock master bestowed it upon him. Time tested and true! —Eric William Pierson