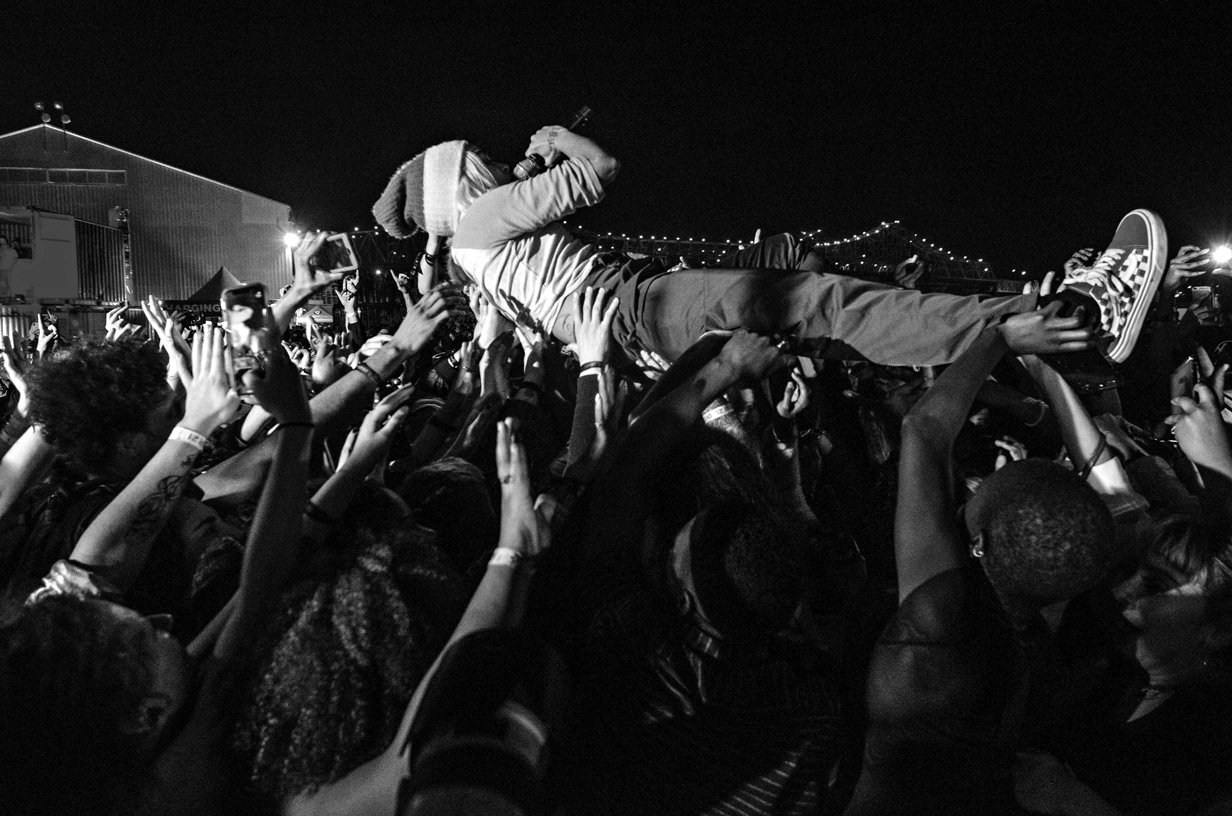 In a town with hundreds of festivals and an abyss of uber-talented musicians and artists, it takes a lot to distinguish oneself, but the curators of BUKU Festival have done just that. Tucked away on the riverfront behind Mardi Gras World, participants experienced two power-packed days of EDM, rock, and hip-hop. This was my first BUKU experience, so I wasn’t sure what to expect. It was a feast for the ears and eyes to say the least. I was surrounded by live painting, lifesize sculptures, lights, and walking art in the form of bodies—lots and lots of 20-something-year-old bodies, draped in hula hoops, thongs, glitter, and fluorescent accessories. This year the fest featured 5 stages and 40-plus acts, drawing over 17,000 people each day. Here’s my musings on some of the mainstream and local acts I enjoyed.

PINK ROOM PROJECT
Opening on the Front Yard stage, Pink Room Project mixed deep house and electronic music sprinkled with New Orleans bounce, trap, and jazz. “Ladies and gentlemen and non-gender conforming, this is your warning to get your ass on the dance floor!” said front man Ares. While DJ Lil Jodeci kept the crowd moving, Ares assured folks that ageism, sexism, and homophobia were prohibited. The band had a unique sense of style: think goth-meets-hip-hop to make an unforgettable “new” New Orleans sound.

MGMT
Rock band MGMT brought us into the night during sunset. Their strongest performance was the classic tune “Electric Feel.” The crowd danced nonstop. I felt like I was floating on clouds during their performance of Limahl’s Neverending Story theme. Between the big dog from the movie flying on the large screen, the sea of secondhand smoke from vape pens and cigarettes, and glowsticks waving in the air, it felt like a big fantasy party. 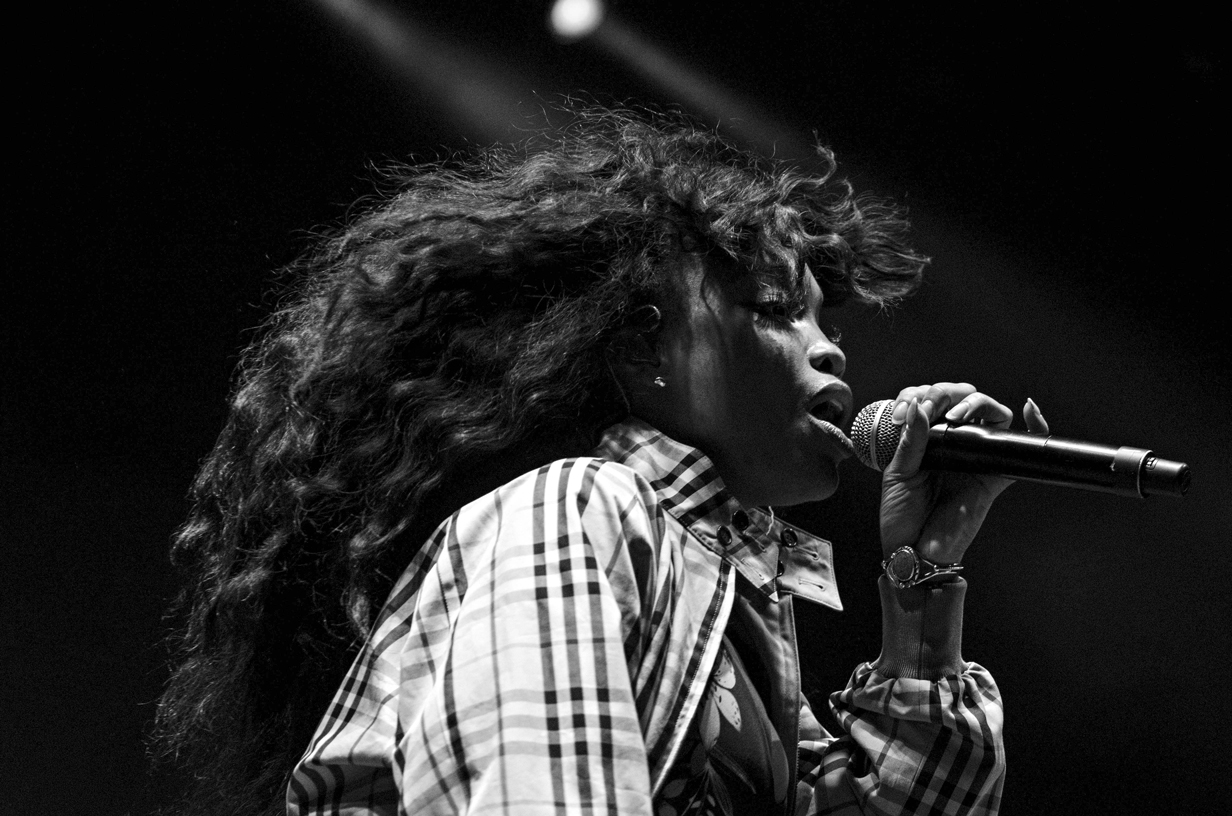 SZA
Around 8 p.m. on the “Powerplant” stage, popular R&B crooner SZA kept the energy high. She sang fan favorites such as “Go Gina” and “Supermodel” to an excited and engaged crowd as they sang the lyrics right back to her. Her performance was cut short due to an ankle injury.

SOULELECTION
(Whooligan, Esta, Sango)
The LA-based Collective known for their motto “The Sound of the Future” sent three awesome DJ /producers who kept the Wharf stage rocking. Whooligan mixed hip-hop chart toppers with bass-heavy EDM beats, while Esta blended house hits, R&B, and downtempo. The front row was full of headbanging and hair waving. The kicker came at the end, during Sango’s set, when he experimented with Brazilian baile funk. The Portuguese chants and exotic samples almost felt like sophisticated trap music. So what if I couldn’t understand the words? When the music sounds this good, who needs to?

KIDD LOVE
New Orleans DJ Kidd Love opened up the Wharf stage and got the party started early in the afternoon. He literally took the crowd to school with a set that started with old-school funk hits by James Brown and Clyde Stubblefield samples, transitioned into Afrika Bambaataa, and then caught up with current EDM hits. BUKU had a breakdancing crew performing across from the stage. They switched up styles as he switched up the music. I never imagined that hand dancing could look so fly.

UPBEAT ACADEMY
A local foundation that teaches at-risk youth music creation and production skills, Upbeat had a small 30-minute set on the Front Yard stage. Students and graduates were featured and played mostly hip-hop samples they created, with a little rapping in between. The sounds varied from polished to raw and unmixed. The featured youth showed great potential. What turned out to be a major loss for festival goers on Saturday was a gain for Upbeat. Lil Uzi Vert no-showed for his set that night without explanation. In a statement to fans, BUKU announced they would be donating a portion of his fees to the academy. 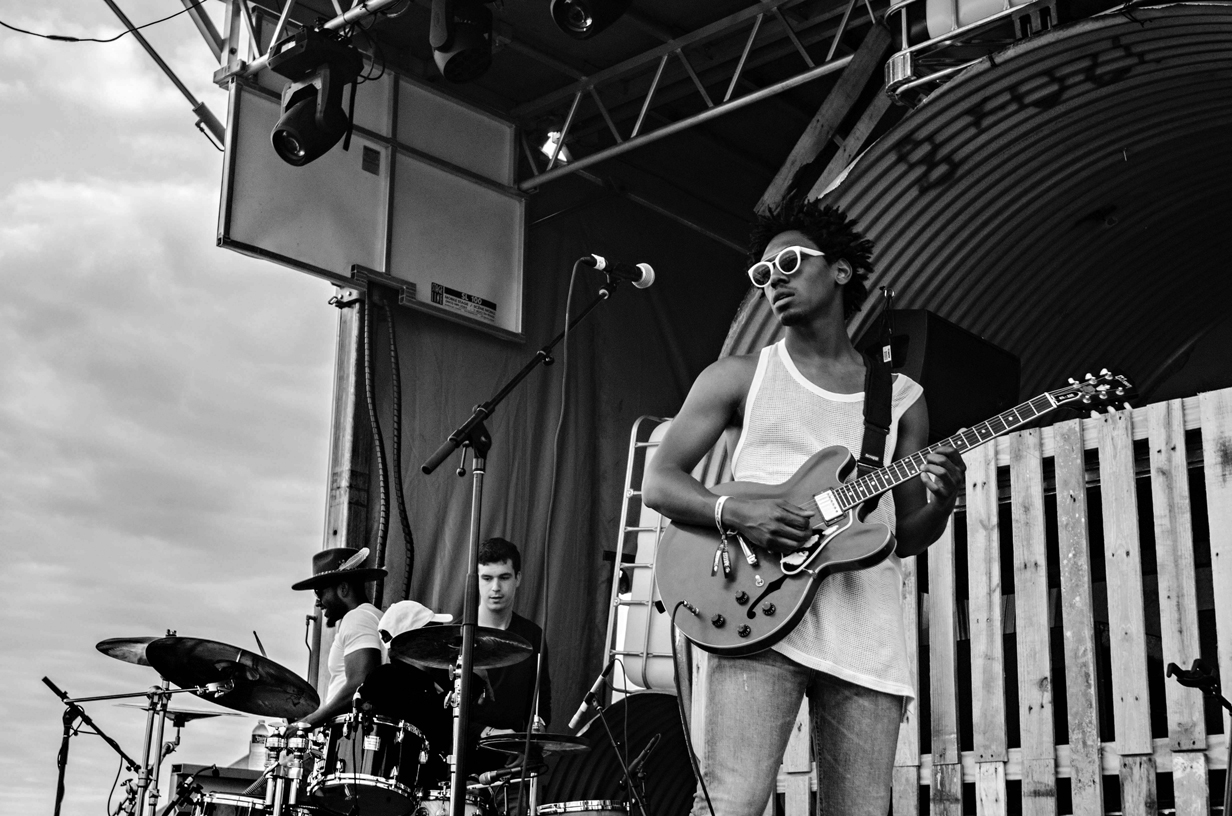 AF THE NAYSAYER & YUNG VUL
Another great local act, AF the Naysayer and Yung Vul played an intimate set on the Wharf stage, mixing jazz and rock. The hip-hop style vocals were scattered throughout the performance, but were simple accents on their great musicianship.

JAY ELECTRONICA
Performing on the Ballroom stage, NOLA MC Jay Electronica had one of the best sets of the entire festival. “I’m not used to being so far away from the people,” he repeated before diving in the crowd to perform on the floor, then jumping back on stage, asking some of the crowd to join him. He performed fan favorites such as “Exhibit C” and “Dear Moleskine.” “When women ask me about being Erykah Badu’s baby daddy, I ask them, but what about my rhymes tho?” He’s a comedian too. Considering how rarely he performs, I would have preferred to see him rap the entire time. During one portion of the set, he invited three fans on stage to freestyle and the crowd cheered them on. Folks were buzzing, not knowing what to expect next. Afterwards, Jay stayed around to shake hands and take pictures with as many fans as possible.

PRINCESS NOKIA
Known for her strong personality, Nuyorican pride, and feminism, Princess Nokia controlled the crowd from start to finish. Her set was a roaring mix of EDM and trap hop—complete with clapping (and not hands if you know what I mean), dancing, and crowd surfing. The chorus to her popular single “TOMBOY,” “My lil titties and my fat belly, my lil titties and my fat belly,” was a stand out performance. Everything about her is hypnotic and layered; being extremely petite and soft spoken makes her unapologetic rawness even stronger. Beyond her catchy hooks and mosh pit swagger, Princess Nokia’s lyrics are very socially-informed and center women, especially women of color. She is the perfect package. From the folks who simply want to drink and party, to folks that are over analytical (like me), the princess emerged a queen and made sure everyone had a good time.

BASSNECTAR
Downtempo and electronica DJ Bassnectar literally shut down the entire event as a one man show. If 17,000 folks were at the festival Saturday night, it seemed like 16,999 of them swarmed around the Powerplant stage, filling the entire field all the way back to the Front Yard stage. The crowd was screaming and headbanging in unison as he kept the music coming. It was a bass-heavy mash up of rock, EDM, and hip-hop. Even his light show was amazing. I tried to focus so I could write this article, but my mind kept drifting away to the hypnotic music. If BUKU had yearbook superlatives, Bassnectar would be voted mostly likely to succeed, most popular, and most likely to be your favorite DJ. As a prude hip-hop lover, Bassnectar popped my music bubble and my music cherry. 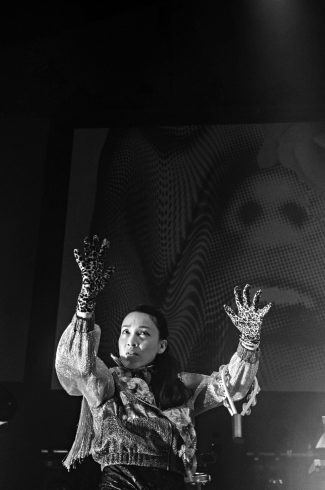 LITTLE DRAGON
I wasn’t sure what to expect from Swedish band Little Dragon. They are known for mellow downtempo just as much as they are for electronica. No slow jams here. Lead singer Yukimi Nagano’s dreamy voice led folks in unison as the band kept dance vibes going. Their hit “Ritual Union” was my favorite performance. Balloons floated across the crowd as a pink glow filled the enclosed Ballroom stage. As much as I enjoy their recorded music, they sound ten times better live. Musically and aesthetically it was an awesome end to my first BUKU experience.

If you are 35 years-old like me (or older), don’t let the free spirits or barely legal ages of the crowd fool you. This was one of the most musically diverse and creative festivals I’ve attended. Beyond the lights and partying, BUKU at heart is a celebration of art. As youthful artists continue to create platforms that promote inclusion and defy genres and cultural barriers, I hope the message will one day supersede the music.