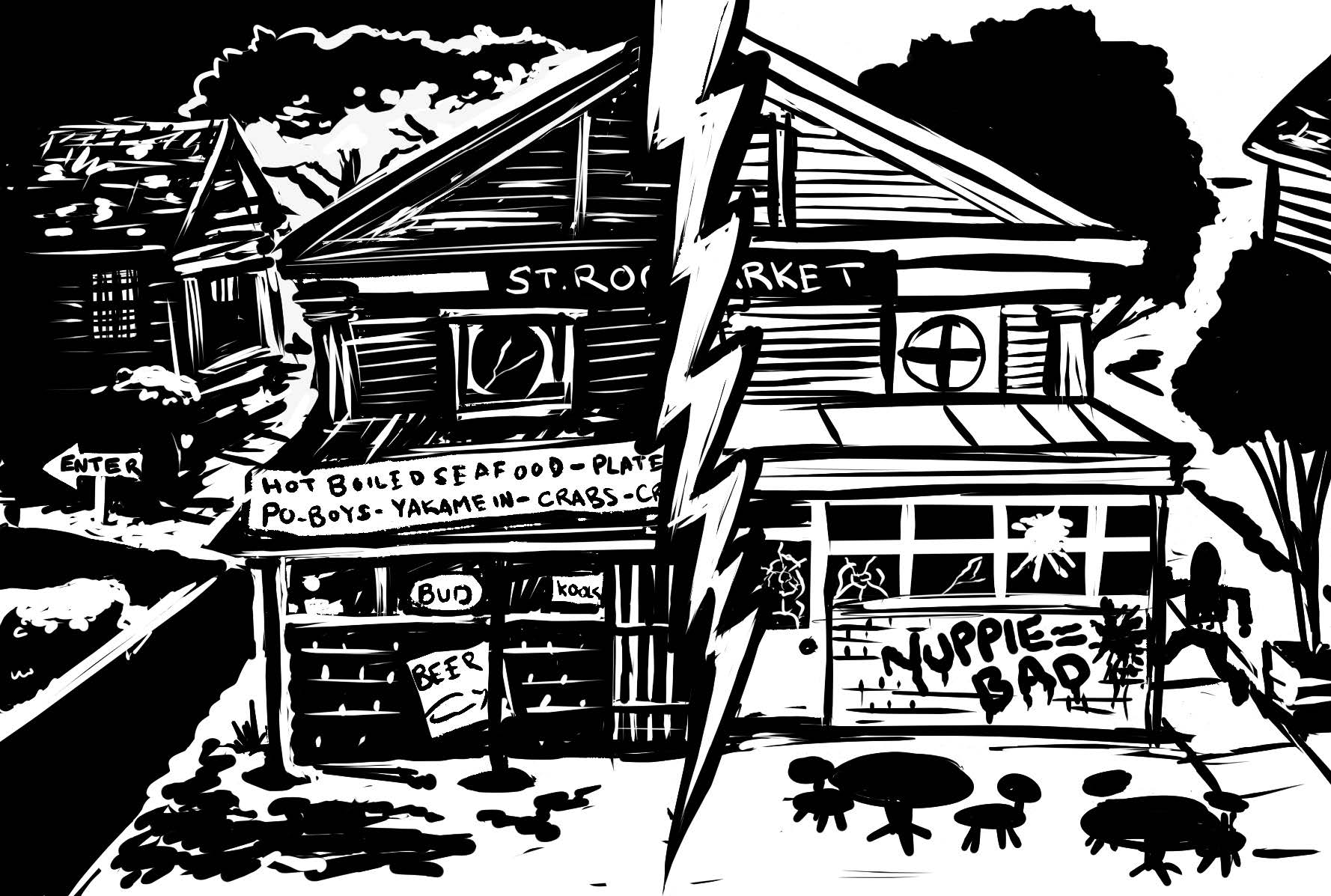 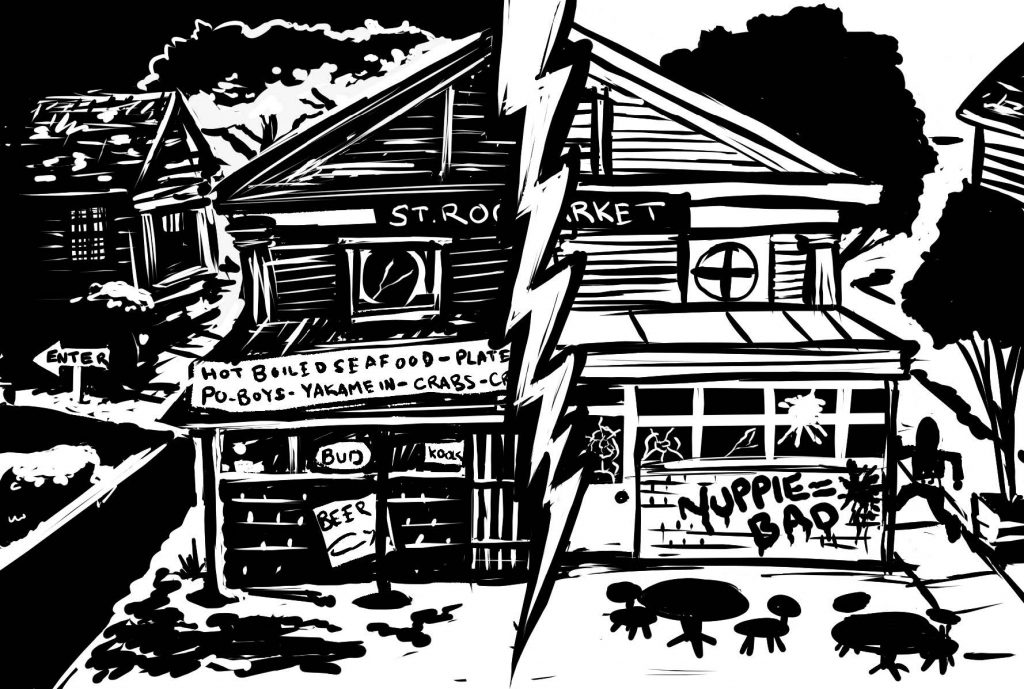 New Orleans’ latest landmark of controversial redevelopment speaks to the crossroads at which the city has found itself, precariously situated between endemic poverty and craft cocktails. The juxtaposition of a fast- food restaurant and a high-end food court leaves many to wonder: Is there a middle ground between the dollar menu and gourmet tapas?

Affordable access to basic groceries lost out to the gourmet vision of Will Donaldson and Barre Tanguis, the developers in charge of spearheading the bourgeoisie polestar. Donaldson and Tanguise are co-founders of Launch Pad, a small business incubator based in New Orleans. They’re also the duo behind Bayou Secret LLC, the city-designated master tenant of the historic building. Their model for St. Roch Market is meant to provide vendors with a setting in which to expand their business. While this could prove to be a lucrative opportunity for small business owners, there is still the question of whom exactly St. Roch Market is meant to serve.

“The entire project is based around the local demographic. We want the people in the neighborhood to be our primary customers,” Donaldson told The Advocate. The wants of the local demographic were well documented prior to the business’ opening. A 2010 survey prepared by four community organizations indicated that residents wanted a market, citing, “a consensus among St. Claude Avenue corridor community residents that the St. Roch Market should be restored as a source of fresh food, with highest preference given to local produce and seafood.” Additionally, a 2013 Times-Picayune article stated the requests of residents clearly in its headline: “St. Roch Market Should Be Affordable And Accessible, Residents Say.”

The local demographic hoping for an unpretentious place to purchase groceries have been disgracefully shortchanged by small plates. The Eighth Ward’s new fancy food court is about as much of an affordable market as Hank’s is a wine bar and bistro. The addition of the business to the St. Claude corridor offers nothing to those whose sustenance depends on the Supplemental Nutrition Assistance Program (SNAP). Hot, prepared foods are unavailable for purchase with a SNAP card. More importantly, St. Roch Market doesn’t accept food stamps for the small amount of groceries they carry. There’s little question as to whom Mayor Landrieu was addressing when he proclaimed at the business’ ribbon cutting ceremony, “This is your community center. This is your neighborhood.”

It’s not that people are resistant to progress, it’s that they don’t want exploitation to be a part of the process. It shouldn’t be surprising for a business operating like a case-study for insolent redevelopment to get its windows smashed out.

Three weeks later, St. Roch Market was defaced by a small group of vandals. Surveillance footage released after the incident documented the covert late- night operation—seven individuals dressed in all black, faces concealed, methodically moving around the building while spraying the façade with bright-pink paint shot from squirt guns. Scrawled on the brick were the phrases “Fuck Yuppies” and “Yuppie=Bad.” As a finishing touch, the windows were shattered via hammer.

The property damage became a prominent media affair, dominating local news the following day. A WWL feature showed Mayor Landrieu surveying the damage which he referred to as “a damn shame.” A camera shot of $4 cinnamon rolls followed, then an image of a smashed window, and then the Mayor once more. “This is not gentrification,” he said.

Arguably, gentrification is a word which has been overused in recent years, casually applied as an easy explanation to exceedingly complex issues. While definitions of gentrification vary, any dictionary could ascertain that St. Roch Market is in fact a textbook example of the term—a clear illustration of urban renewal typified by the arrival of affluent people into poor areas, transforming neighborhoods to meet middle-class standards and increasing the cost of living, inevitably displacing the underprivileged.

The most recent Census data lists that 40% of the St. Roch neighborhood lives in poverty. 55% of occupied housing units in the St. Roch Neighborhood are rented. 74% of the renters spend 30% or more of their income on housing. The rental market of the St. Roch neighborhood, now being referred to as “Silicon Alley” in various listings, presents harrowing options. The asking price of a three bedroom advertised as being in a “quiet neighborhood, near St. Roch Market” is $2,900. A one bedroom listing, also touting its proximity to the new business, is listed at $1,900.

The St. Roch neighborhood has become an unruly real-estate market. Examining recent Zillow.com listings of for-sale properties listed since the end of April reveal skyrocketing prices over a relatively short period of time. The most moderate increase is a four bedroom on Arts Street listed at $105,000, an uptick of more than 200% from its 2014 sale price. A three bedroom on Mandeville Street, listed at $67,500, is up roughly 350% from its 2008 sale price. A two bedroom on the same street is listed at $229,000, an increase of more than 500% from its 2010 sale price. The most startling escalation can be found on Spain Street, where a four bedroom home sold in 2012 for $17,500 is now on the market for $334,900, an increase greater than 1800%.

To address the viability of finding affordable housing in this increasingly expensive area, consider that the most recent Census data lists the average household income for the St. Roch neighborhood at less than $30,000. That St. Roch Market is more likely to increase property values than alleviate food insecurity in a neighborhood with a large number of renters and a high level of poverty is problematic, especially considering that the source of funding for the project has been fulfilled in large-part by federal dollars intended for recovery of low-income areas.

The New Orleans Building Corporation (NOBC)—a city agency overseeing city- owned properties including the Union Passenger Terminal, the World Trade Center, and several miles of riverfront property including Crescent Park— used 3.6 million recovery dollars to renovate the storm-damaged building. $600,000 was provided by FEMA. $3.1 million was provided by HUD in the form of Disaster Community Development Block Grants specifically designated to “help cities, counties, and States recover from Presidentially declared disasters, especially in low- income areas.” According to HUD’s website, “not less than 70% of CDBG funds must be used for activities that benefit low- and moderate-income persons.” Instead, NOBC applied public money to subsidize a private business. St. Roch Market being upscale and unaffordable further divorces the recovery dollars from their intended purpose. This paradigm of urban renewal prices-out underprivileged people with the very funds reserved for their neighborhood’s recovery. In reality, this isn’t recovery as much as it is systematic restructuring. Bayou Secret LLC, NOBC’s tenant, is the city’s accomplice in a multimillion-dollar example of disaster capitalism.

At the heart of the matter, St. Roch Market is a project being carried out at the expense of low-income people. It’s more in the business of changing the neighborhood it’s in than serving it in its present form.

New Orleans has the second highest rate of income inequality in the U.S. One in every three children in the city lives in poverty. An Advocate story with the headline “Vandalization Of New St. Roch Market Reflects Community’s Dissatisfaction, Disappointment In Finished Product, Residents Say” discloses a communal sentiment of letdown. In the article, City Councilwoman Latoya Cantrell said, “The market is great, but when I went there it was bittersweet, because I could feel that the community could see it as: This is great but it wasn’t created for me.”

Urban renewal doesn’t have to be socially irresponsible. Opposition to St. Roch Market isn’t necessarily a reflection of people’s reluctance to change. It’s not that people are resistant to progress, it’s that they don’t want exploitation to be a part of the process. All things considered, it shouldn’t be surprising for a business operating like a case-study for insolent redevelopment to get its windows smashed out.

Whether Donaldson and Tanguis choose to modify Bayou Secret’s model is uncertain. “We’re getting a lot of feedback,” Tanguis told WGNO. “So we’re going to be very responsive to the neighborhood about what they want and need in the market.” Despite this statement, if the objective of St. Roch Market is to yield profits, there is no reason for the business to reform as long as it’s commercially successful. Donaldson and Tanguise proudly position themselves in the entrepreneurial sphere. Profit is their holy grail. In an article regarding the opening of St. Roch Market, Donaldson told T Magazine, “The market gives everyone an all-access pass to the secrets of New Orleans.” Such pronounced thoughtlessness may prove to epitomize St. Roch Market.

What’s occurring in St. Roch is that a desirable neighborhood is being emptied of its low-income residents through a partnership between city government and private developers with a shared interest in catering to a more profitable clientele. The more than one-third of St. Roch residents who live in poverty aren’t the target audience for profit-oriented entrepreneurs’ source of revenue. With the methodical dismantling of the St. Roch neighborhood, a wealthier group is able to move in and advance a process of consumer-based social transformation. The city is facilitating gentrification through strategic spending to increase real-estate values and the tax-base. The additional monies flowing to the city will inevitably find their way into infrastructure catering to New Orleans’ primary source of income: tourists.

The annexation of the historic St. Roch neighborhood by the wealthy could culminate in the area becoming a full-blown tourist destination. If the RTA ever comes up with the funding to extend the North Rampart Street/St. Claude Avenue streetcar past Elysian Fields, visitors to New Orleans will empty out of an anachronistic mode of transportation into what will be a very different neighborhood than what most New Orleanians now know. A version of the city will be touted as authentic, but the locals will know better. In New Orleans, money eats culture and excretes simulacra.

At the heart of the matter, St. Roch Market is a project being carried out at the expense of low-income people. It’s more in the business of changing the neighborhood it’s in than serving it in its present form. The project represents food commoditization so extreme that it not only neglects a local population, it facilitates its displacement. It stands for infrastructure disguised as an asset to the underprivileged members of the community it’s simultaneously disregarding—a slap in the face to everyone who has been waiting nearly ten years for a decent place to purchase basic groceries.